We’ve been chased more dogs in the last two days than in almost forever.  We’d heard that dogs were bad in Ecuador but didn’t really see that many of them north of Quito.  The little blighters have spent that past 48 hours trying to make up for their countrymen (er, countrydogs if that’s a word).

It’s quite sad actually as the dogs don’t appear to be owned by anyone.  They mostly hang out in packs at roadside restaurants, repair shops or little stores.  All of this of course on the 4 to 6 lane Pan-American Highway.  They seem to sense us coming with several perpendicular stealth attacks from behind buildings and/or fences.  Many of them have a wonky leg but that doesn’t seem to stop them from giving it a real go.  With other dogs, we can normally yell “NO” and dogs back off.  Not these mongrels, they keep coming.  We’ve had to revert to the stop, grab a rock and throw the rock method.  Dogs north of here would back off if you stop and really slink away if make a throwing motion.  Not these guys, they require an airborne missile coming their direction before they give up.

Sadly, the shop owners where the dogs live don’t really seem to give a toss if the dogs chase us.  We’ve had a few people laugh and many simply turn away.  One guy yesterday got him his car and started honking.  I’m not sure what that was about but it had no effect on the chasing mob – rocks were required again to halt their progress.  I’ve taken to having a few just the right size rocks in my back pocket.  I only wish I was a better aim, boy would I love to nail a couple of them right between the eyes.

All the anger was boiling over today, then we come across the sign below on the highway.  It basically says “don’t hit me when I cross the road” – “one of your minutes will save my life”.  Of course, they throw in a cute photo of Fido begging.  And of course, the next dog we saw was so sad, that you couldn’t help feel sorry for it.  One of its legs was badly mangled and the guys at the servo where we stopped were kind of looking after it (not enough to take it to a vet, of course, but perhaps they were throwing it scraps – at least they were not chasing it off).  We went from hating dogs to feeling sorry for them in a matter of minutes.  And I’m sure we’ll back to hating them with the next chasing pack.  It’s a dog’s life… 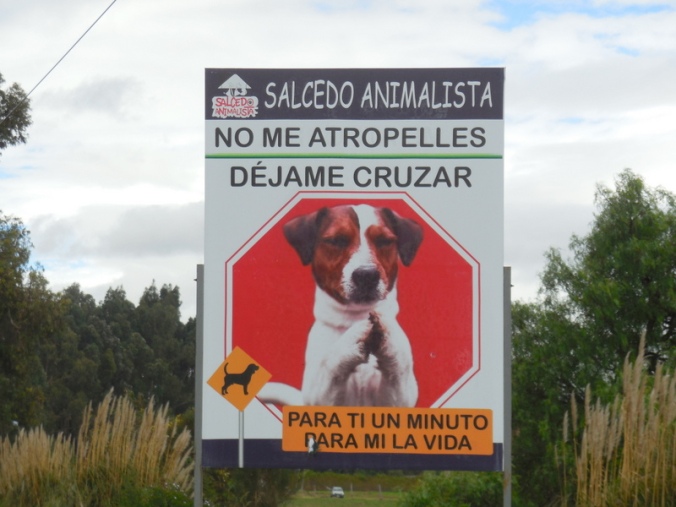 Please don’t run me over….

Other than the dogs, the ride was fine.  We had a bit of sun and some blue sky but not enough for us to get a look at Cotopaxi.  Maybe we’ll just have to make a return trip to Ecuador.  At least the clouds never got thick enough for us to get any rain.  We were on the Pan American Highway all day and even took it straight into Ambato.  We’d read all sorts of stories about it having bad traffic and it being really steep at the end but we managed pretty easily.  There are a couple routes into town so maybe we lucked out and picked the right one.  Traffic was easy and we didn’t even need our lowest gears.

The side of a volcano – we never did see the top – but checkout the blue!

This is the Pan American Highway – how on earth did they get away with building that house?

We arrived about 11AM, too early for a hotel so we pulled into the main square (where they have a nice city sign) and decided to look for a cafe.  There were a few places but none of them had a place where we could put the bikes and see them.  I wandered a few blocks while Nancy hung out in the square.  When I’m out on these missions, I always hope to find something or return to Nancy and discover that she’s met one of those helpful locals.  Today I found nothing suitable and returned to find Nancy sitting by herself.  Dang, what to do now?  We agreed to go up the street a little further.

One guy was taking the photo and another telling him how, the second guy didn’t know the first one, just offering his help.  It was funny to us at least!

Just as we were leaving, a local came up and asked us about our trip.  Meet Julio.  Julio works at his family’s company that owns several local radio stations and was just out running an errand at the bank.  We chatted a bit about our trip then asked him if he knew a nearby cafe, where we could keep the bikes safely nearby.  Boy did he, he walked us two blocks up the street to a bakery where he negotiated with the owner that we walk our bikes though the cafe out to a courtyard area out back. 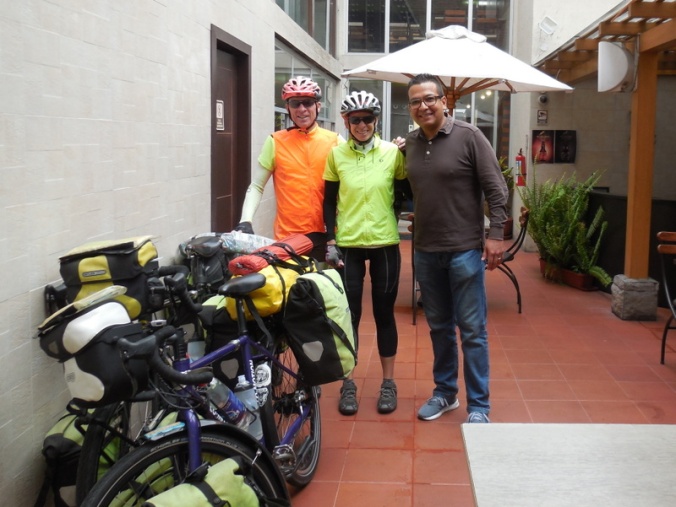 Dave, Nancy and Julio – what a great host for Ambato

By the time we reached the bakery, we figured out that he could speak English (better than our Spanish) and that he was also quite the adventurer himself.  He has done mostly motorcycle trips and has been all over South America, the USA, Europe, Asia and parts of Africa.  He sat with us at the bakery for a while going over maps and giving all kinds of ideas about the local area.  Eventually he passed the time where a “bank run” would be “too long” and he headed back to work.  Thanks Julio – we really enjoyed meeting you and appreciate all of your suggestions about things to see in Ecuador.

Until meeting Julio, we were going to skip the slightly touristy town of Baños.  But he was super keen on it and had us thinking that we should go there.  It adds about 40k to the overall route but actually would reduce the overall climbing.  We’ve spent the entire afternoon going back and forth on what to do.  There are basically two choices.  One, we go to Baños and see the waterfalls, hot springs and rest of what nature has to offer.  Two, we go the direct route to Riobamba, skip Baños but have two extra days riding near Chimborazo – the tallest mountain on earth if measured from the center of the earth.

Julio was very convincing with his enthusiasm for Baños, but we missed out on Cotopaxi and would really like to see Chinborazo.  What to do but check the weather forecast.  It turns out that the next two days are the best two days sun wise for some time.  If we take the direct route to Riobamba, and then take a rest day there, we may just get a chance to see the point on earth that is closest to the sun.  If we go to Baños, we would be in Riobamba on Friday but clouds are forecast.  So…. unless we change our minds again, we’ll head directly to Riobamba in the morning.  Thanks to Julio, we have both Baños and Cotopaxi as reasons to book a return trip to Ecuador one day.

Second brekkie at the bakery – eggs still on the way

We managed a bit of walk around town (discussing where to go tomorrow most of the time).  According to Julio, a massive earthquake shook Ambato in 1949, destroying many of the historical buildings.  You can see this walking around as there is a real mix of architectures, some new and some old.  We found what we think was the main church.  It is very modern looking on the outside and thus not overly attractive.  The modern architecture however created a great interior space – with lots of stained glass and a massive open high ceiling.  Other than the guys intermittently using a hammer to fix something inside, the atmosphere was quite nice.

Inside the Ambato church 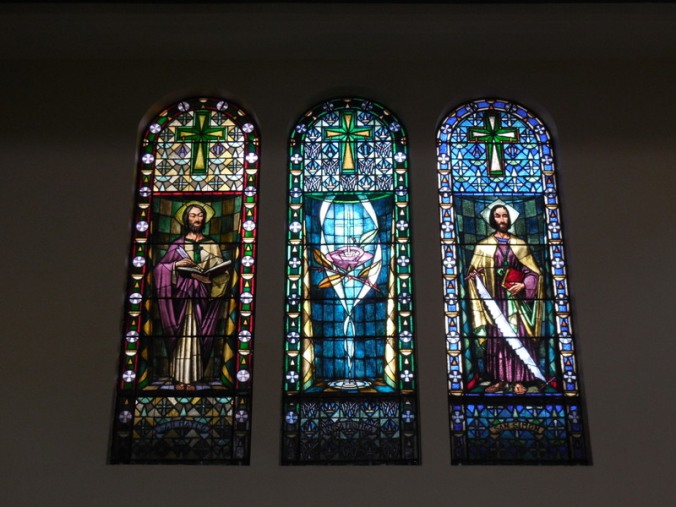 Inside the Ambato church 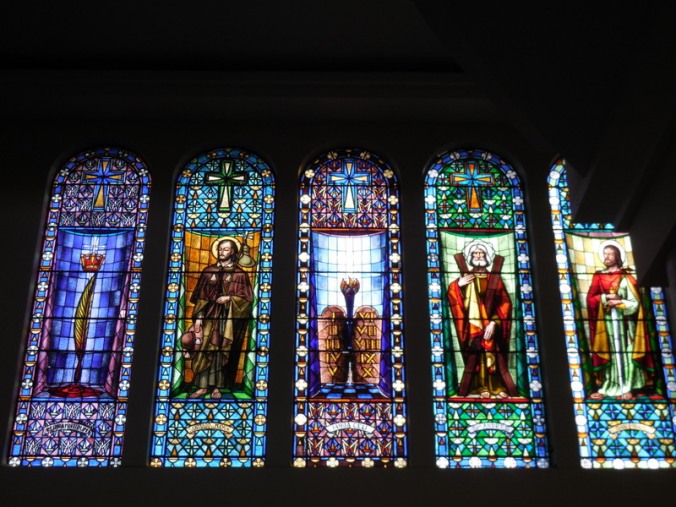 Now that we’ve (finally) made our minds up, we started looking at more detail at tomorrow’s profile.  We have roughly 30k of climbing to start with, then we’ll cross the saddle between Chinborazo and another nearby volcano.  The saddle is over 3,600 meters high so it looks like we’ll set yet another trip altitude record.  We hope to get a look at Chinborazo with a few puffy clouds and lots of blue sky.  We’ll keep a keen eye on the mountain, but also a wary eye out for those pesky dogs.

Thanks again Julio for stopping and spending so much time with us.  It’s moments like those that make the trip extra worthwhile for us. 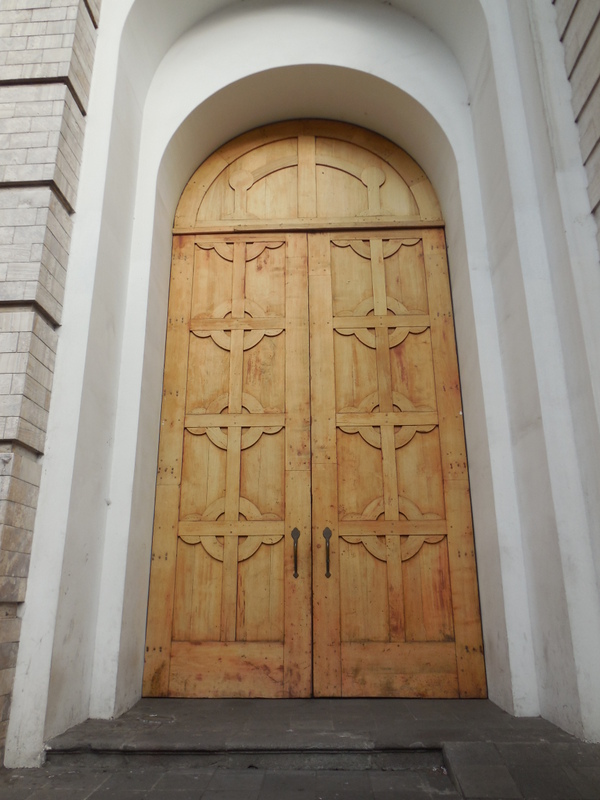