Today we rode the Avenue of the Volcanoes – or so it would seem.  We didn’t get any rain but after about the first hour of riding clouds pretty much made seeing any volcanoes unlikely.  We had blue skies for the start of the day but the sun couldn’t quite break through.  We wanted to get a look a Cotopaxi, the nearly 20,000 foot snow capped volcano but no such luck.  We sort of knew which direction it was so we kept a keen eye out for it to peek out from behind the clouds.  Twice we saw some its snow, but the two photos below is all we got.  Darn.  Oh well, I’ve included a nice web shot of the mountain so that you know what you were supposed to see to today.  And if our luck changes tomorrow, we may get still get a look in the morning – we are staying in a town that sits almost in the shadow of the mountain.

Yup, that white stuff in the upper right is Cotopaxi’s snow

And here we have it again, just right of the tree 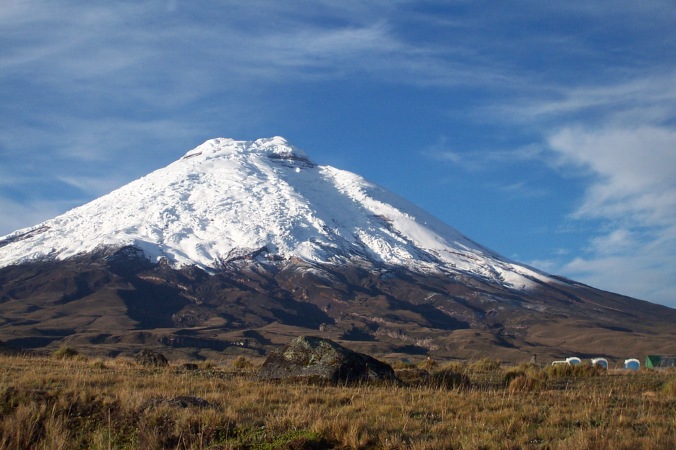 It is not that we want any volcanic excitement – we’ve had enough.  Two days ago on our last night in Quito we had our fourth earthquake of the trip.  It was only magnitude 3.5 but it shook our building all the same.  Come to find out, the epicentre was about 3ks from where were staying.  That’s more than close enough.  And for sure, while we are on the topic of volcanoes, spare a thought for the victims and their families in Guatemala from their recent volcano eruption.  It turns out that the volcano that took so many lives there is the very same one that we watched erupt with awe only a few short months ago.  Our eruption was only a little puff of smoke and ash.  From the reports we’ve seen, the event yesterday was much more powerful.  Volcanoes are nice to look at and photograph but ultimately they are powerful forces of nature that can be deadly.

We saw a lot of these signs today – Zone of eruptions

Back to today’s ride…  We had a nice brekkie in at our hotel in Machachi.  And also a great dinner last night.  We can’t say enough nice about the folks running the place.  It is basically a mother, father and two adult children.  They all work very hard and try making everyone’s stay perfect.

We knew we had a shortish day so we lingered over brekkie and didn’t leave until just after 8AM.  As noted, we had some blue skies more or less for the first hour.  We spent the first 2.5 hours going up.  In fact we climbed for 19km and reach the highest point on the trip for us so far – 3,500 meters (almost 11,500 feet).  We rode slowly because it was steep, but also because we were feeling the effects of the altitude.  We’ve been living at or below 2,800 meters for a solid month but sure felt the extra 700 meters going up today.  We know that we have a pass close to 4,500 meters in Peru and may even go over 5,000 meters at some point.  Today was a good test but it was also nice that we came back down below 2,800 meters tonight. 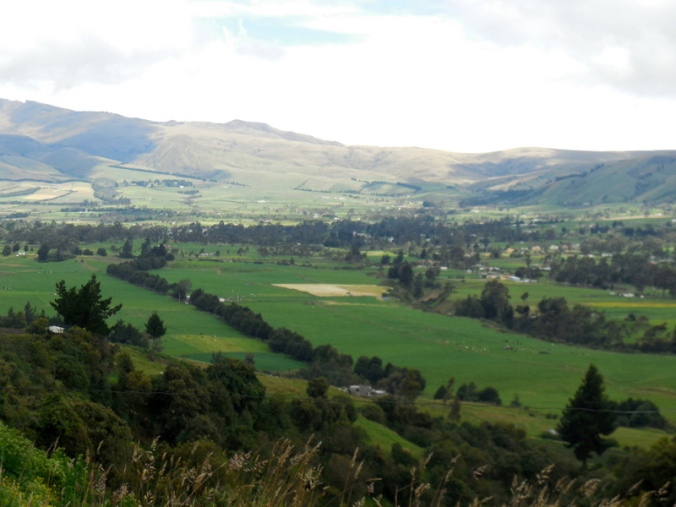 One shot of the hills before the clouds close in

The climb took some effort but we didn’t linger at the top.  There should have been nice views of Cotopaxi but I’ve already mentioned the clouds.  Well, at the top the clouds were not only thicker, they were darker, and only a few 100 meters above our heads.  We felt a few light sprinkles so we quickly donned raincoats and headed down the other side.  We never got wet but the coats were required to keep us warm – both of our bicycle computers read 10 degrees (less than 50).  With wet shirts form sweating on the climb, we didn’t need any more chills on the downhill.

We stopped for late morning tea at a newish restaurant on the side of the highway.  They had great picture windows out to Cotopaxi but all we got was more clouds.   So, instead we settled for bread, hot chocolate, cheese and cream.  We didn’t really get English clotted cream but instead got to try the Ecuador equivalent called nata.  It wasn’t half bad – not something you’d eat every day if you weren’t riding but tasty all the same.  With some homemade jam on warm bread and a hot chocolate it hit the spot.

Beats Gatorade and a snickers bar 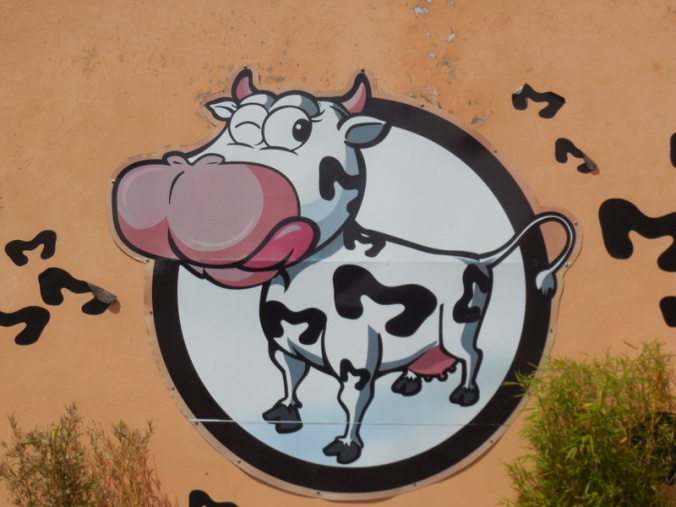 It was mostly downhill from our stop but into a building headwind for us to read Latacunga.  We had a couple hotels noted and found the first one to be just fine.  Neither of us wanted to wander as it was starting to rain.  I’ve sort of picked up the duty of room check out these days.  I don’t mind and am starting to have some fun with it.  Today I played “I’m not sure…” with the owner and got a discount so I must be doing something right.

With our late tea we didn’t really need lunch so we just ate our sandwiches in the room and rested a bit.  Nancy rested more (she didn’t love the jaunt up to 3,500 meters so much today and is nursing an altitude-induced headache) and I went out to explore town.  As with it seems like almost every town in Latin America, they are doing some work on the roads – making it a little hard to get around but it was still interesting.  They have a nice church on their main square and not one, but two town signs as well. 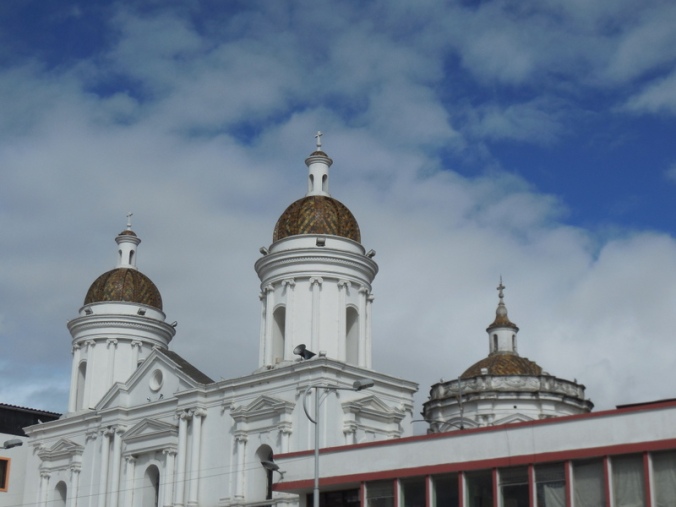 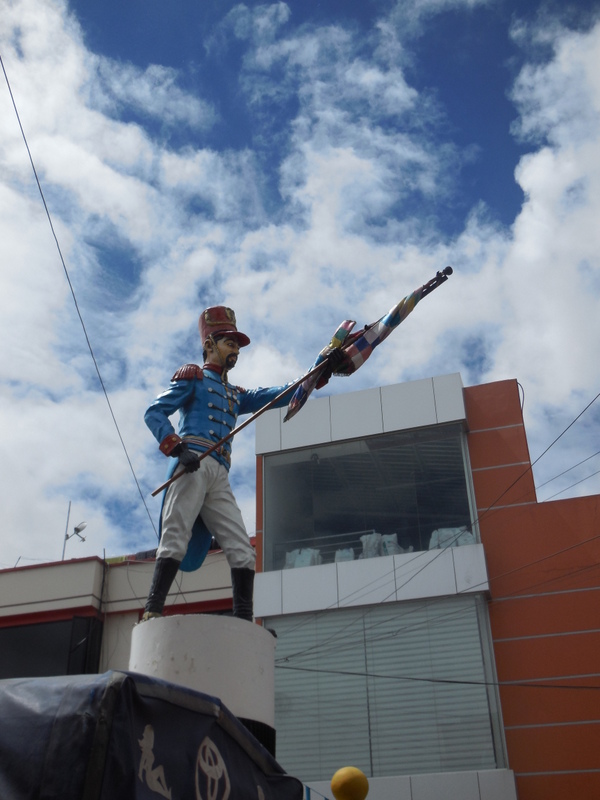 I also visited the town cemetery.  We don’t normally visit cemeteries but I thought maybe I’d see Cotopaxi from the far side where there were no town buildings to block the view.  No luck, the clouds won out again.  Oh well, there is always tomorrow morning, and the cemetery was interesting to look at anyway.  They have limited space so they go up with new graves.  The old graves are on grass in the middle and the new graves are on walls on the outer edge.  It was very well looked after and there were several caretakers milling about.  Kind of nice to escape the noise of the car horns for a spell.

Out of room, no problem, just stack them up

We’re heading out for dinner soon.  Nancy has picked out a place to eat that has “gringo” in its name.  I’m sure that burgers will be on the menu, if not pizza.  I’m not too fussy as we had our “tourist” moment at morning tea anyway.

Tomorrow is another short day for us so we are having brekkie at the hotel again.  We are feeling the altitude and the two weeks off in Quito.  So, easy is good, no point in killing ourselves.  We head the same way that we rode today so here’s hoping for clear skies so we have a chance to see Cotopaxi and no wind, at least in the morning.  One can always hope….