(Happy one year on the road!  One year ago today, we rolled out of Fairbanks, Alaska, starting this trip)

In spite of staying in the same apartment as three Peterson sisters, with their countless degrees, advanced degrees, higher education certificates and frankly, much better writing skills, you are stuck with me as your author again today.  I’m pretty sure that I will have three senior editors reviewing my work so at least today, spelling and grammatical errors should be at the very minimum, if not completely non-existent.  The only real challenge will be getting consensus on the use of Aussie or American English.  But really, that’s not my worry as final decisions in this area will be well beyond the point where I have any say as to the content of this post.

So…  What have we been up to?  We’ve been to Old Town a couple times now.  The first time we talked about in the last post, the second time was yesterday for the “changing of the guard” (more on this later) and we’ll probably be back there again tomorrow for one last church visit and climb.

Today we hit the outdoor shops in search of a few replacement gear items.  We don’t really need much, more fine-tuning than changing things up really.  One item we wanted to find is white gas for our stove.  Today we learned a lot about white gas in Ecuador.  We visited two stores that carry the MSR brand multi-fuel stoves like ours.  We figured if they carried the stoves, they would know how to get the white gas for these stoves.  In truth, you can burn kerosene, diesel, petrol/gas or white gas in the multi-fuel stove.  White gas is the preferred fuel as it burns hotter and cleaner, giving you more heat and less mess on your pans.

We haven’t been able to find white gas in Colombia or so far in Ecuador. – And today we learned why.  It turns out that white gas is a favourite chemical used in the illegal processing of cocaine.  It is apparently not legal to sell it in Ecuador and may not be legal in Colombia.  The shops that sell the multi-fuel stoves told us to buy kerosene from a ferreteria (hardware store) or gasoline from a gas station.  Gasoline is the best of the rest, after white gas – it’s cheap and readily available as well.  So, at least until we reach Peru that will be our fuel of choice.

We also visited a “regular” shopping mall.  Shopping malls the world over have a certain sameness.  You can count on stores from Zara, Nike, Guess, Clarks, Crocs, Adidas and a bunch more brands that you’d know if you saw them.  Our mall was about the same but had enough other new stores to keep us interested for a few hours.  Prices are in USD, of course, and surprisingly on par or above the same as stores in the USA.  The mall had few gringo customers.  It appeared that the target market was probably the growing middle or wealthy classes here in Ecuador.  Nobody in our party bought much but it was a fun experience, including eating in the food court.

So, to the changing of the guard, our big event in Old Town yesterday…

Every Monday, in the Plaza de Independencia, the grand plaza near Palacio de Carandolet (the presidential palace in Old Town), they have a formal changing of the guard ceremony.  None of us had heard of it before coming here but it features on many Quito “must do” lists.

The ceremony starts at 11AM.  We arrived around 10:45 to find the square full of people, a bunch of protestors in matching t-shirts and heaps of police.  There are at least 5, maybe 6 different police groups – the federal police, the transit police, the tourist police, the palace police and the city police.  And of course given that the president and a bunch of dignitaries were present, there were a handful of heavily-armed army-looking dudes.

Travel warnings for every country we’ve ever visited specifically state that you should avoid crowds and in particular, political gatherings.  Both Nancy and I felt a wee bit uneasy being there at the start.  But it was really fine.  Protesters chanted a few times but they were not very loud and seemed to take turns with other groups.  A policeman asked one group to lower their protest signs while the formal proceedings were underway and they did.  It was all very polite and cordial.

The ceremony itself was full of pomp and circumstance.  At 11AM, the palace guards dressed in brilliant blue, yellow and red uniforms raised the national flag and fun began.  Guards on horses trotted out into the square, circling the Lady of Liberty statue.  Guards with long pointy bamboo pole things (aka spears) marched single file out into the square.  A full marching band rolled out.  They had barriers up to keep the routes clear but there are quite a lot of folks.  Getting photos without someone’s head blocking the view was actually hard.

Eventually everyone settled into place and the national anthem was played.  Many in the crowd sang but the protestors remained silent, but still respectful.  Someone made a longwinded speech welcoming every possible dignitary in attendance, plus I’m sure a few who weren’t there.  We couldn’t really follow but got the gist.  The protestors occasionally raised a sign and chanted a little – the police near them told them to chill and they did.  It was all very civilized and friendly.  When the speeches finished, the band played a few tunes, followed by some dancing performed by native dancers.

After about 45 minutes, the band, palace guards and horse dudes marched back out of the square and the riot police formed a line around the palace.  They looked pretty bored.  Nobody rushed the stage or palace; or caused anything close to a disturbance.  The protestors removed their matching t-shirts and got ready to head back to their normal lives.

Even though we couldn’t follow everything it was fun to be there.  It was jovial and friendly.  I’m sure that the protesters have real issues but they seemed to be happy being there and just getting a chance to share their views.  The whole big ceremony sort of made it hard to follow which guards were coming in and which ones were going out but I’m not sure that it really mattered.  Changing guards once a week probably made some sense back in 1812 when the whole thing started.  These days, a guard with a long pointy bamboo pole thing (aka spear) is hardly something to make you quake in your shoes. 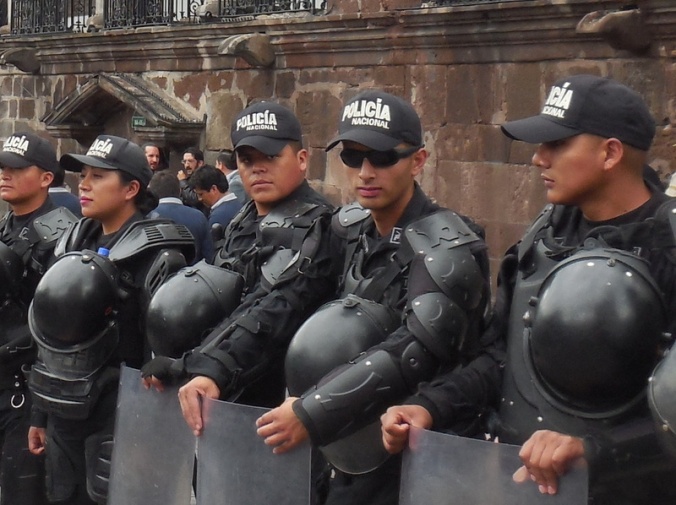 Horses on the move 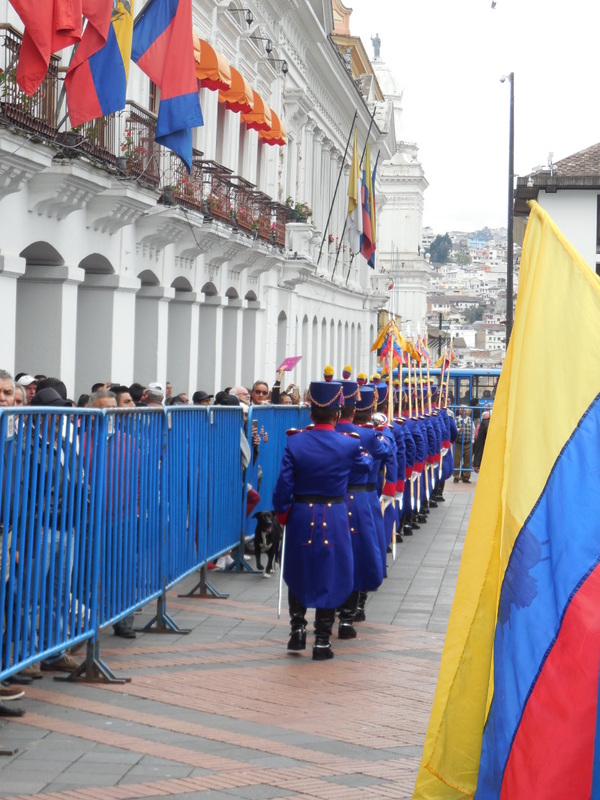 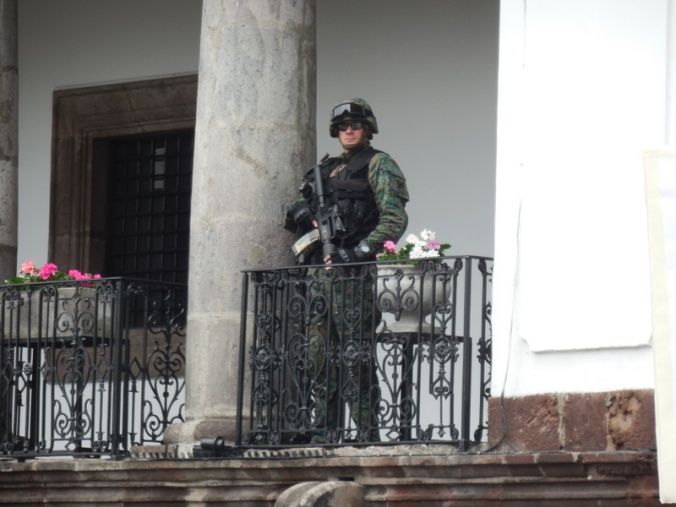 The real security around this joint

More spear guys standing guard on top of the palace

In other exciting news, this morning around 8:30 am, we experienced a 5.0 magnitude earthquake – our third earthquake of the trip.  Luckily, the apartment building is quite new and listed as an anti-seismic building.  We definitely felt the building sway side to side for several seconds but earthquakes are a very common occurrence here and seem to be just a part of everyday life in Ecuador.  This was the first earthquake in 30 days, but Ecuador has experienced 10 in the past six months ranging from 3.8 to 6.0, and over 24 in the 12 months.  I suppose you do get used to them.  I’m happy to also report that the popsicle building noted yesterday seems to have remained standing – phew.

And finally, we have decided that we will stay in Quito a second week to continue our Spanish studies.  We found a school near where we are staying and a smaller Airbnb close by.  Nancy marked us as intermediate on the school admission form but that was quickly dispelled when we registered in person today.  It doesn’t matter too much, however, as we will have a private two person, one teacher class.  Whatever our level, that’s what the teacher will work with.

I’ll stop there and turn this over to my team of editors – it should be interesting to see what I get to post once they are finished – haha.

19 thoughts on “Quito – Changing of the guard and other thoughts”