We were out for the count early last night – well, I was anyway, falling asleep while Dave posted the blog out in the lobby area of the hotel.  All that climbing really wears me out – and I know we’ve got a lot more ahead of us so I expect it will be a repeating pattern.  Ride until we find somewhere to sleep, try to stay awake long enough to eat something to make sure we have some fuel for the following day, and then fall asleep to get up and do it all over again!  (in the rain…)

Our long ride yesterday put us in good stead to have a pretty short day into Popayan, one of the larger cities in southern Columbia.  We didn’t leave the hotel until almost 7:30, knowing we had a short day.  Yeah, alarm didn’t go off until 6am so that was our sleep in…. While it was a truck stop hotel we were on the back side of the hotel (away from the parking lot) so it was pretty quiet – all in all pretty good value for money!

When you are on the road for a long time it is easy to lose track of what day of the week it is, but here in Columbia you can always tell when it is Sunday by the number of cyclists out on the roads.  So, today we were joined lots of cyclists for parts of our journey into Popayan and we got lots of hollers, whistles and thumbs up from cyclists coming the other direction.  It really is good for the spirit to be amongst other cyclists – even if they are going way faster than we can go!

I stopped to take a photo of this tree – we see it a lot.  The photo didn’t turn out great but I liked this random extra photo – too bad about the power lines… 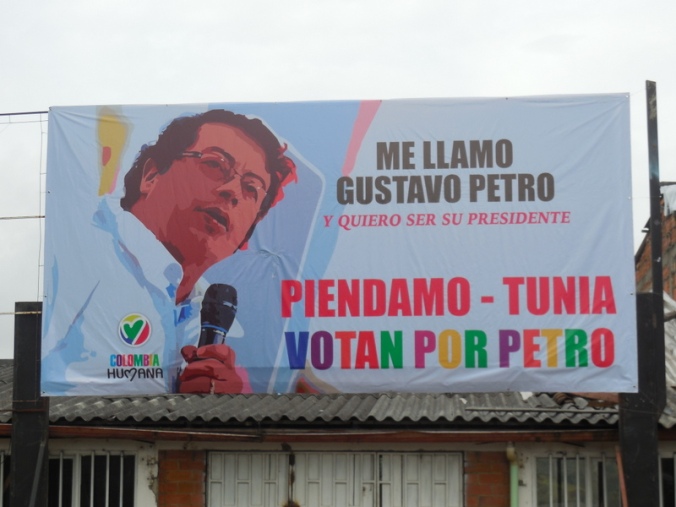 Meet Gustavo – running for president – elections are on the 27 of May, after we leave the country.  We hope that they are peaceful.

We had lots of ups and downs even with our short day, enough to get us breathing hard and sweating pretty good.  We had one group of cyclists come up behind us and chat for a bit, even handing us orange segments and then stopping to take pictures.  They were accompanied by a motorcycle rider who rode behind them, perhaps as a safety measure.  We saw a couple of groups going the other way that were also being trailed by a truck or car with its flashers on.  While there is some traffic on the road it didn’t seem dangerous – perhaps it’s the group riders that get someone to drive behind them, so they can ride together as a bunch.

We were then joined by another rider, Christian, who ended up riding with us all the way into Popayan.  We chatted almost the whole way, both of us practicing our bad Spanish and Christian being game enough to try to understand what we were saying.  Of course general cycling news and Colombian cyclists are always a good topic so Dave and Christian talked for a bit about the various famous Colombian cyclists, what was happening in the Giro, who was going to ride in the Tour de France, etc. After we came into the city limits of Popayan Christian treated us to some juice (served full of fruits of all kinds) at a little cart – clearly a favourite stop for local cyclists.  It was delicious and just what we needed to get us the remaining distance to our intended stop.  Thanks Christian for riding with us today, helping us practice our Spanish and for the juice – it’s interactions like that make Colombia a great destination for cycle touring. 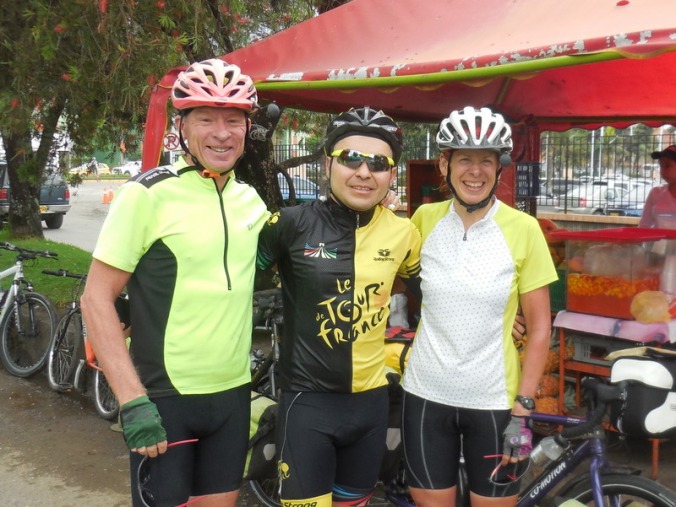 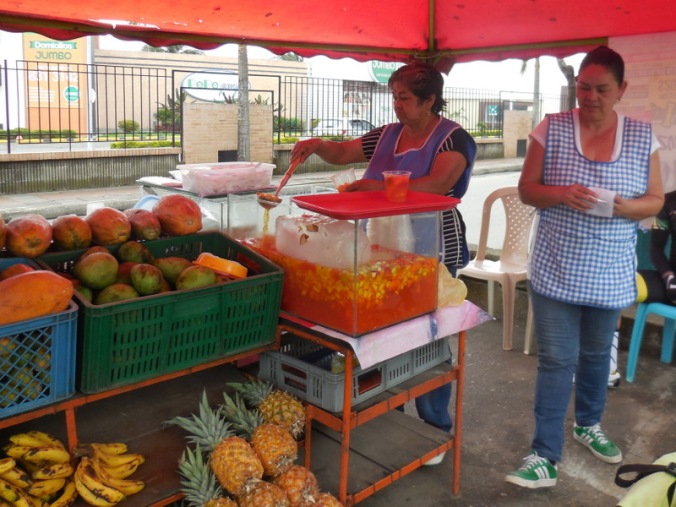 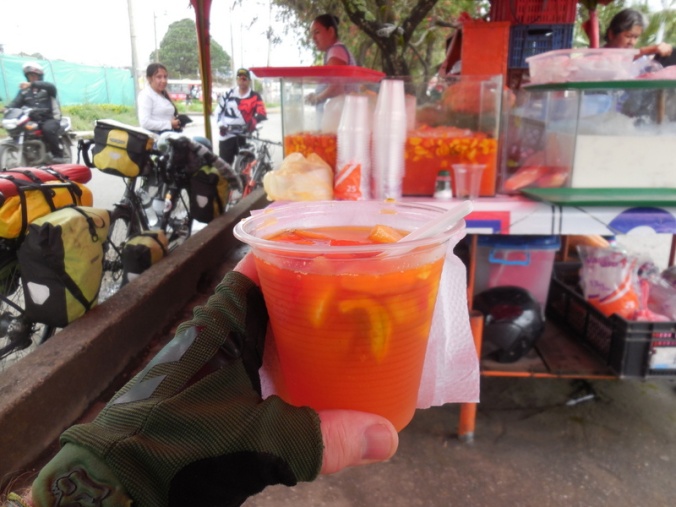 Wow, this was good!

There were some dark clouds looming when we left the juice stand and we had almost made it to our hostel when we felt the first couple of rain drops.  The sky let loose and it started absolutely pouring so we pulled over when we saw the first spot we could get some cover.  Checking the map it turned out we were just around the corner from our target hostel.  It was still pretty early, before 11am, but we took our chances and made a dash to the Le Soleil Hostel, pulled up under their covered porch and rang the bell.  Thankfully they were happy to let us in and they had an open room and a place where we could get the bikes under cover.

We unpacked and took hot showers and then arranged for a load of laundry to be done – feels great to get things washed and dried, rather than hand washing and hoping things dry.  It had stopped raining (mostly) so we decided to risk it and go have a wander around town.

Popayan is apparently one of the oldest cities in the Americas, having been founded (or perhaps more accurately, colonised) by the Spanish in the early 1500s.  The historic center is all white – all of the buildings are painted white, many with balconies of wood and/or rock providing some very nice contrasting detail.  It is somewhat stark but once your eyes get used to it is quite interesting and unique. 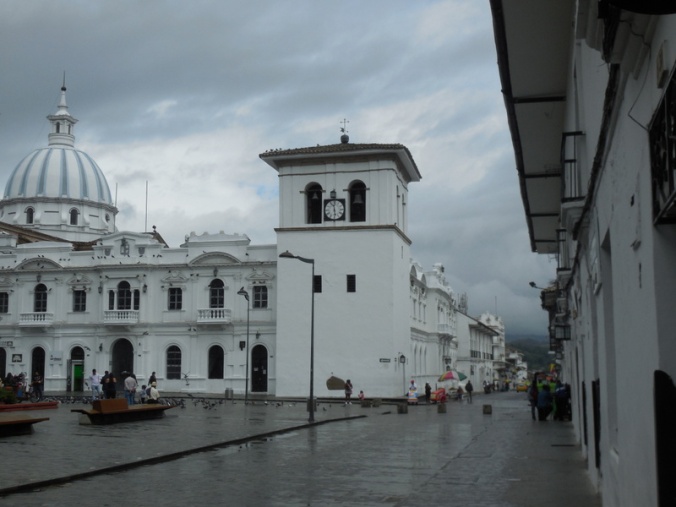 We stopped at a little cafeteria for the daily lunch special – starting off with great soup again and the usual meat, rice, plantains and salad.  It’s hard to beat the meal for nutrition and value – meals plus drinks for $4.50 USD.  After wandering around town a bit to see the sights we stopped off at the Juan Valdez cafe for a decent espresso and a brownie (must have dessert after lunch, right?).  It continued to rain on and off, but thankfully none of the heavy downpour we had in the morning.

Sunday is obviously a quiet day here, with many shops and restaurants closed.  So we found our way to a grocery store to pick up some things for dinner to make at the hostel.  On the menu is chilli, with avocado, cheese and some arepas – which are essentially like really thick tortillas.  It seems like a night for something warm as the rain comes down.

From Popayan we continue to make our way south toward the border with Ecuador.  Lots of hills between here and there.  We have planned out our days but we may have been overly ambitious on some of them, depending on how the climbing turns out.  I must say, I really dislike riding in the rain and getting my feet all wet but I am afraid that it is something I am going to have to get used too.  It’s especially hard with all the climbing, because having a heavy raincoat on while climbing steep mountains isn’t really pleasant either!  It would be different if we had a place at the end of the day where we knew we could throw stuff in a dryer to get dry but I think that’s pretty unlikely out where we are headed.  So, must toughen up I guess.  (Junior editor’s note: Ya gotta be haad Nancy, haad)

At least it is getting cooler so perhaps I can start carrying some chocolate bars (or chocolate in some form!) that won’t melt and will give me a bit of solace at the end of the day.