We had a quiet night in the Oasis (Drop Bear) Hostel.  Even though it was Friday night, the youngsters were well behaved.  The only issue was the rain starting up a little after midnight.  We of course were inside so the rain didn’t really bother us.  It was more that we kind of slept with one ear open to see if it would stop before the morning.

When the alarm went off, rain had not stopped.  Noises of staying another night were made and ignored.  We have a little bit of a schedule to keep between here and Quito.  And equally important, the forecast is basically the same for the next 10 days.  Riding in the rain is just going to be part of the story.  We got up, organized and lingered over brekkie – dragging our feet pretty much every step of the way.  Somehow right about 7AM, the rain stopped – we scrambled and were on the road by 7:15, almost right on schedule.

We had about 15k of Cali to get through and it was not much fun.  We thought an early start on Saturday morning would be ok but there was a lot of traffic.  That and the road being wet had us on our toes.  The traffic lights were the worst as we got stuck at couple with cars queuing up behind us – getting away was bumper to bumper cars and scooters.  We stopped at a servo to check the map, use the facilities, strip some raingear and generally calm our nerves.  It worked and we made it to the less busy Highway 25 after only an hour.

Once on Highway 25, almost on cue, it started to rain.  It was light at first but got heavier as we rode.  Nancy wanted to stop and put the rain gear back on but we both sort of thought that it would let up.  It didn’t, we pushed on and got wet.  Nancy eventually had enough and stoped for her rain coat and booties.  I just decided to tough it out.  When we pulled up for morning tea at a highway rest stop it was getting lighter but not quite finished.  Here we rung wet gloves, had coffee and a snack.  Leaving we had raingear on but the rains stayed away for the rest of the day.  So, a little later, we stopped and stripped things off again.  Not sure that we got the timing right on the rain gear ever throughout the morning – oh well. 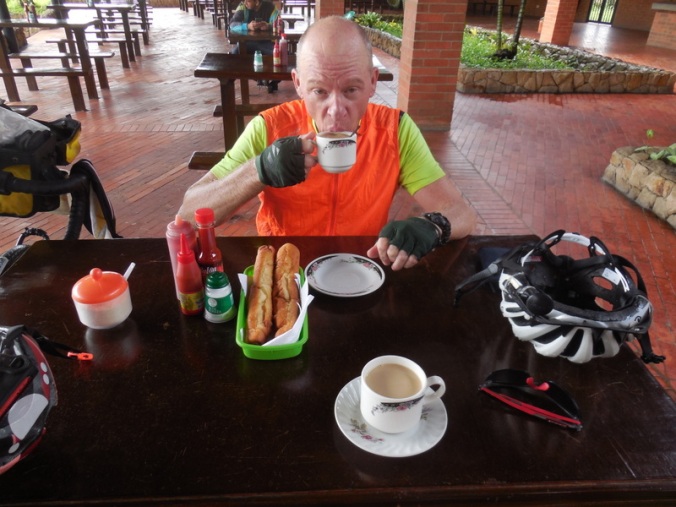 Everything is better with a “tinto” – ubiquitous Colombia coffee served everywhere

Water gushing out of Nancy’s gloves

We had about 55k of valley riding today before climbing back into the Andes.  Down in the valley, the crop is sugar cane.  They are harvesting now so there were more warning signs for the trucks and some trucks on the road.  These are monster trucks with up to 5 trailers.  We only had one pass us today and thankfully not during the wet roads – that would have been a real mess of road spray.

We had lunch at another servo just before the climbing started.  From here it was mostly uphill the last 40k.  The climb was steep in places but there were enough flats and small downhills to keep us going.  Almost as soon as we started climbing the crop of choice switched from sugar cane to coffee.  We saw lots of coffee out drying and plenty of coffee plants in rows heading up the hill.  The drying coffee was often on tarps – so that it could be quickly pulled up it rained I’m sure.

Fabulous old bus – not sure it would be fun to ride, but it is nice to look at

We had afternoon tea at about 1:30, halfway up the climb.  We choose to push onto a truck stop hotel that we had read about near the small town of Tunia, the second and furthest possible destination in our notes. We knew that the hotel here was not fancy and it isn’t.  Having said that the CMG Hostal is high in terms of value for money.  We got a warm shower (no shower head), a toilet seat, firm bed and WiFi all for $8 USD – yep, that’s not a typo.  For dinner we ate at the restaurant, also bargain priced and very delicious.  The people running both hotel and restaurant are very nice and speak reasonable English.  We had nice Spenglish conversations – them speaking broken English, us speaking more broken Spanish.

Our hotel/hostel/hostal – with a dark cloud

Nancy and the dinner cook 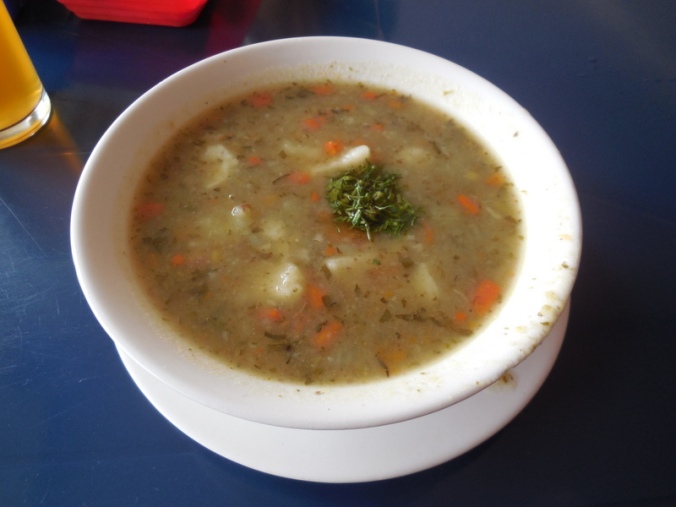 View near our hotel, we’re back in the mountains now 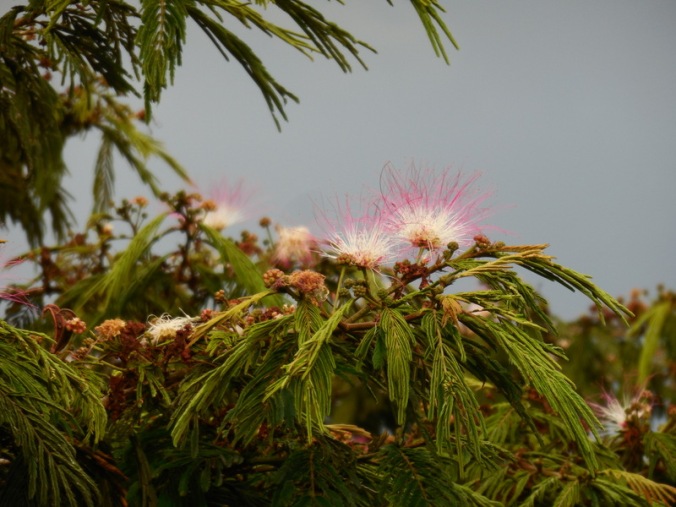 By reaching our more distant stop today we have a shorter day tomorrow.  Nancy has mentioned a later alarm several times to me this afternoon and evening so we’ll see where that debate ends.  She’s on pretty good footing actually so I think she will win out.  I just hope that we can avoid rain riding again tomorrow.  The bikes were really mucky again today so the great bike wash that we got in Cali lasted about 10 minutes after we started to ride today.  I had to wipe the bikes down again, and we even washed the panniers in the shower!