Wow, what a day.  We didn’t cover that much ground but it was hard earned.  The easy part of the day started last night with a good meal in the restaurant and finished with the staff getting us sorted with some brekkie fixins this morning (we were too early for their scheduled serving).

So…  We were ready to ride before 7AM.  Only trouble was that it was bucketing down rain – so much for the sunny forecast.  The hanging plants drip water system was on full bore at this point as well, overflowing.  This added to overall feeling of dread from the rain.

Around 7:45 we decided to rug up and give it a go.  We convinced ourselves that the rain was getting lighter.  Ready, set, hold on…  My back tire was very low.  Ok, 30 more minutes delay to get it replaced.  The hole was easy to find, right where I patched the tire after the massive wire I had picked up on the Mexican motorway.  The tire was still holding but the patch rubbed a hole in the tire.  At least we were got to fix it in the room, out of the rain and where we had a sink to clean-up.

We rolled out about 8:30, wearing our rain coats, rain pants and booties.

It was raining pretty good now and it wasn’t long before we had to stop to take off our sun glasses.  They were just too wet to see through.  We rode about 18k in the rain, getting wet from the inside sweat and outside rain.  Just as we were getting a rhythm, we came upon a road construction control point where everyone going our way was stopped.  We rode to the front of the queue with all the scooters and waited.  And we waited.  And we waited.  It was at least 30 minutes before we were allowed to go.  Most of this time was spent standing in the rain.

We set off first but were passed by tens of cars and trucks. Of course, the rains had made all the construction muck a complete mess for us to ride through.  So much for our efforts to get the bikes clean yesterday.

All this time, and earlier in the morning, I just didn’t feel like the tire I repaired was working correctly.  About 5k after the control we came upon a nice roadside hotel and cafe, overlooking the river.  We decided to stop for coffee and a closer look at my wheel.  It was a good call.  My tire was separating from the bead and probably would have blown if I kept riding. 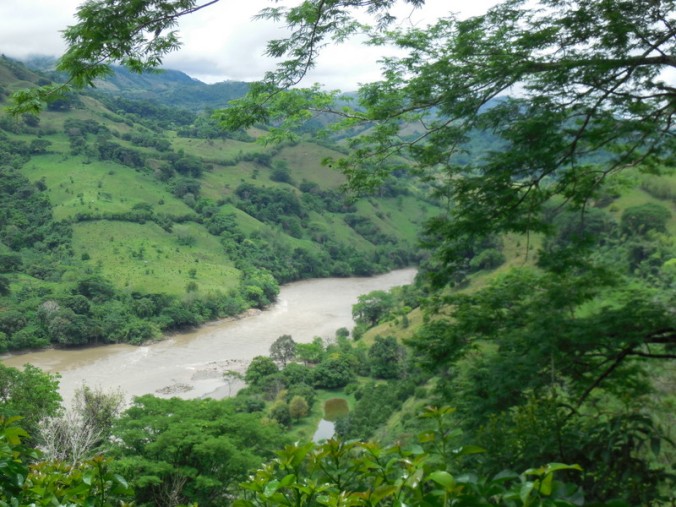 No worries, we have two spare tires.

Bad news, the first tire is no good – it’s a tire we carried from Alaska but we’d folded it for the first three months and stretched out the bead.  I couldn’t get it too seat properly.  Luckily the second tire worked fine.  The original tire on my bike can be fixed with great effort and that could fail.  So, now after putting the good tire on my wheel, instead of being confident we had two spare tires, we had none!  At least we have four working tires.  And tomorrow we may be able to find a shop in our next town that could have a replacement for our spares so we will have at least one until our replacement tires arrive with Nancy’s sisters who are coming to visit us in Ecuador.

While we were at the tire stop, a bus full of Dutch folks pulled in.  They were super excited to meet us and hear about our trip.  We had to pose for photos as well.  So, it was not a bad stop considering the situation. 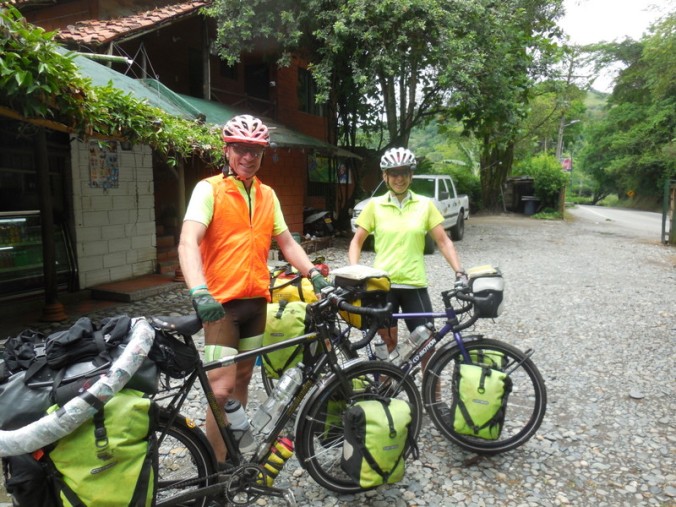 Thanks Dutch people, we don’t get many photos of both of us

We pulled away at about noon, having ridden a whole 20k – and we had another 55k to go.  Not our normal pace but at least the rain had stopped and we were able to put away our rain gear.  Without further issues, we could do it.

The riding here was nice, right along the river.  Knowing schedule I didn’t need to be told that I couldn’t stop for photos.  We just agreed to roll on and make some time.  We were riding up river but the grades were gentle.

Snuck this photo in when we were stopped at a control

Could it be coffee – maybe, we are getting close to the coffee region now

Our progress was slowed several times for more road controls.  None of them were a long as the first but they all cut into our riding time.  All the controls also made for some nice quiet riding as well however.  We only had to survive the bunched of traffic that made it through the controls, then we had a virtual private bike lane.

At one set of controls, we were let through probably when we weren’t supposed to.  We had quiet road until the traffic came at us.  We just got out of their way and continued.  We saw several very long sets of backed-up cars coming at us.  I can’t imagine how upset some of the folks would have been getting – being on a bike and our control by-passes probably made us faster than the cars.  Even though there was no more rain, much of the construction areas were muddy and a wee bit slippery.  Our bikes were a complete mess but we stayed upright – good result.

We finally made it to Irra and a possible hotel about 3PM.  Town was not very inviting so we grabbed a snack/late lunch and rode up the highway another 9k where we heard that there as a “nice” highway hotel.

Helpful worker and Nancy at lunch

We had visions of a hotel like we had for our morning tire issue but weren’t as lucky.  Our room is barely big enough for the bed – forget about bikes in the room.  We arrived here at 4PM – much later than we like to finish but still it the day light.  And yes, we were caked in mud.

I washed the bikes, we showered and now where heading up for dinner at the hotel restaurant.  They have a bunch of meat turning on a giant fire.  I’m sure it will taste good, anything will taste good now.

Tomorrow we have a shorter, uphill day – hopefully with a new spare tire at the end at the shop we’ve heard about.  And maybe, just a little less mud to deal with would be nice as well.  Tired, but clean and safe – what a day.  Sorry – photos are pretty limited today – priorities…