Today was our best day climbing in the Andes so far.  We still climbed nearly 4,000 feet but it was spread out over a longer distance so the gradient was more gradual than the last couple of days.  Cutting the distance way back from normal meant that we didn’t feel a time pressure and we were able to stop often.  We spent the entire day over 8,000 feet and could feel the altitude a little in our breathing, but only a little.  We wore summer clothes – it is obviously cooler than back in the lowlands, but it still over 60 degrees for the low.  We are only 6 degrees latitude from the equator.

I’m not sure what you think of when you think of the Andes but for sure, we expected towering rocky snow bound peaks.  Well, this part of the Andes is nothing like we expected.  Today we climbed and descended through giant rolling green cow pastures.  It is still visually interesting, don’t get me wrong.  It is just not the Andes that we expected. 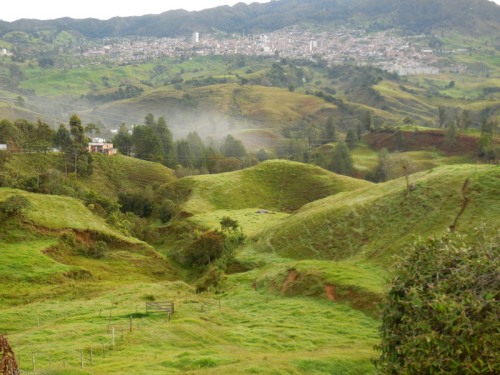 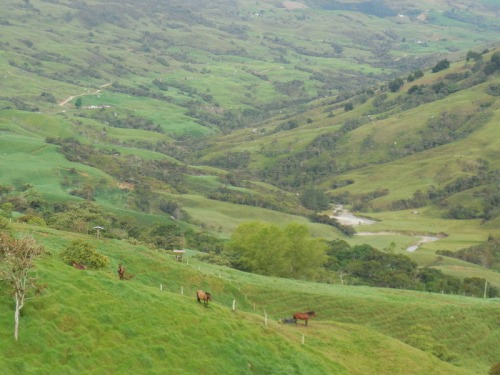 We had a 3k downhill right out of the hotel front door, the first part being extremely steep.  The streets in Yarumal are crazy steep but I managed to craft a route that only had downhills – Nancy was happy, other than the one really steep street that we almost went over the front of the bike.  I had to hang my butt off the back of the bike, Nancy sort of scootered down – fun! 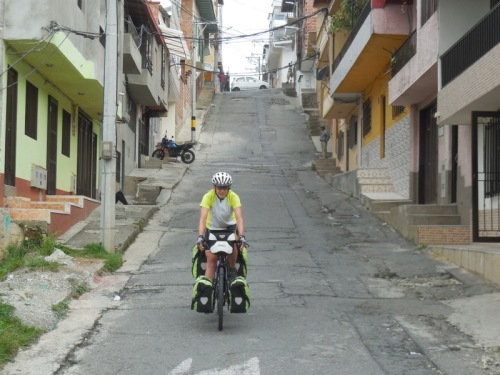 Nancy got her foot up just in time for this photo!

Once the downhill ended, we had a 25k mostly gentle climb.  Traffic was pretty light and we had a great shoulder.  There were a few trucks out and about but they were all more than polite.  I’m not sure that it’s related, but right now, there are a couple Colombian professional cyclists doing well in the Tour de France and in the European races.  We’ve heard kids yell out us “Quintana” several times (Nairo Quintana is the most famous racer currently).  Cycling is important and respected in Colombia, making it nice for even people who ride as slow as we do! 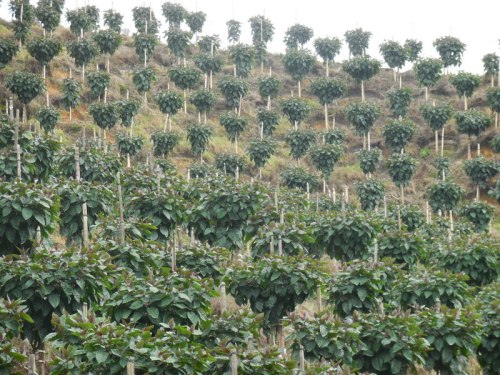 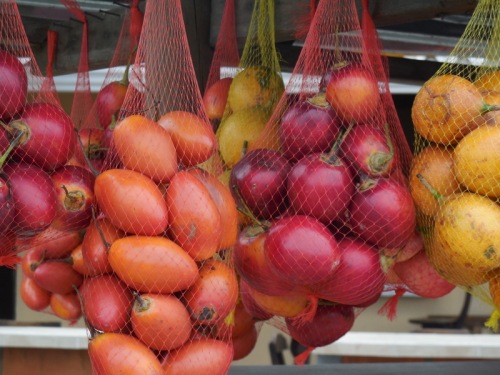 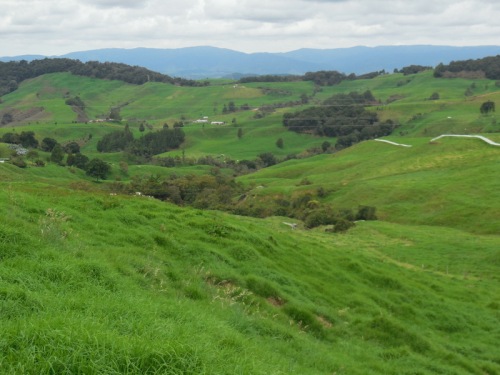 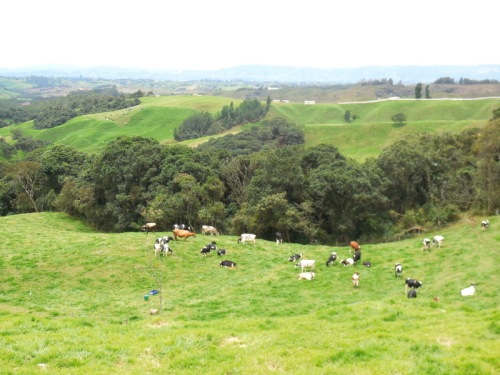 We saw lots of cows today in our “great Andes pasture” ride.  We didn’t really notice that many milk trucks but we did see a lot of milk cans at the end of driveways.  All the cows of course mean milk processing so it wasn’t really that surprising when we came upon a cheese factory with a large store/restaurant that sold its products and other farm products.  For those in Oregon, it was a bit like the Tillamook Cheese Factory, so of course we had to stop.

The cheese makers were very friendly.  In addition to making cheese, they seemed to be famous for their pan de queso.  The version that they make is often called almojebana.  It looks like a bagel but is much softer.  We bought a couple of them right from the oven and boy they were good. 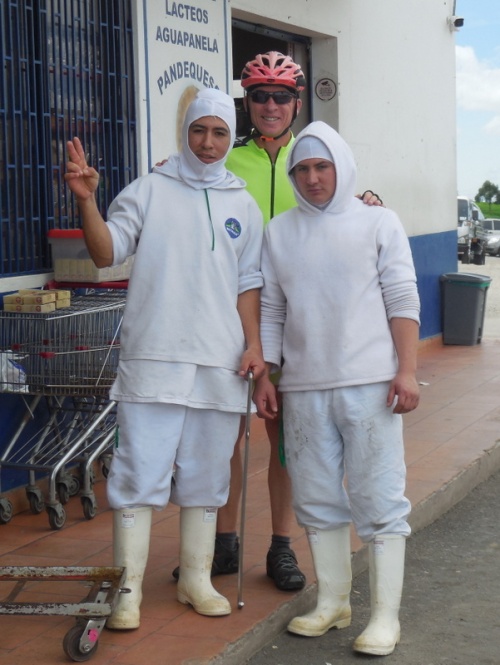 Dave and the cheesemakers

Nancy was in charge of ordering our almojebana but it was much harder than this may initially seem.  We saw people eating the bagel like things but we didn’t know what they were called.  The photos below show Nancy’s ordering process and the gal that helped her – it was quite fun to watch (Senior editor’s note – yeah, thanks Dave, leave me hanging there trying to order something the name of which I have no idea!  After being offered a few things that weren’t what I was trying for, I was reduced to pointing at some folks at a nearby table that had some of the rolls.  Primitive, but it worked!). 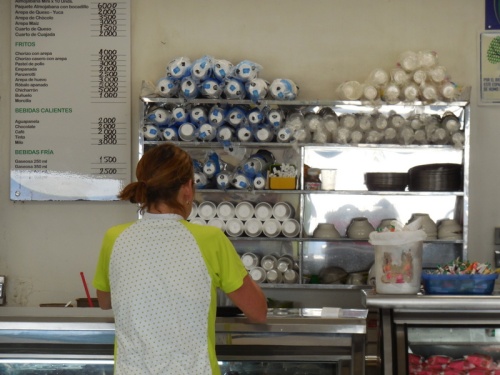 Hmmm…  what should I order? 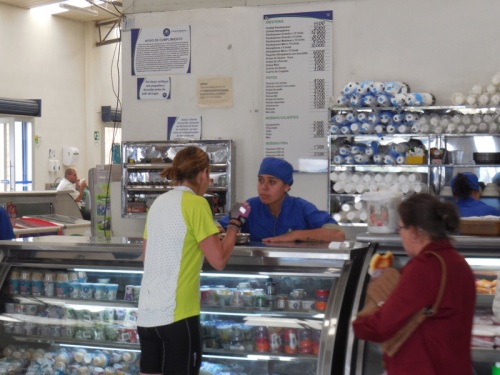 Gal helping Nancy has no idea what she is saying 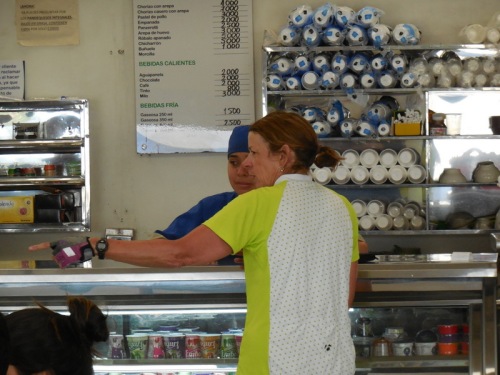 Ok, give me two of what she’s having 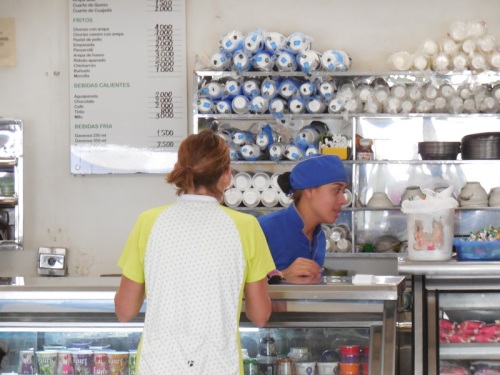 Clerk: “ok, I think I got it but it would be easier if you spoke Spanish” 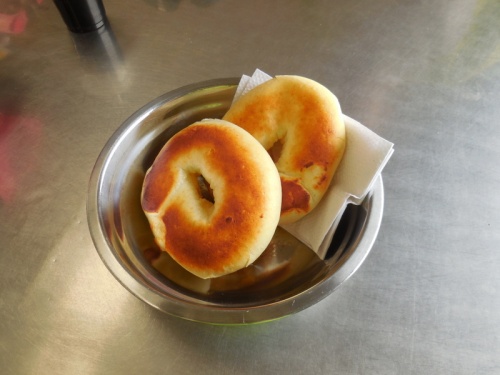 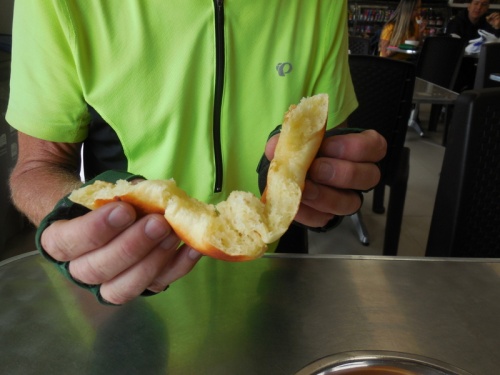 Can you see the steam?

Somehow we pulled ourselves away from the cheese factory and made our way to our destination – Santa Rosa de Osos.  This town has a pretty interesting history.  It was reportedly founded in 1636 when gold was discovered nearby.  The conquistadors came here in 1541 but they didn’t really settle on a single location.  Even before the conquistadors, the Nutabes Indians lived here.  So the whole question of “founding” is really still an open issue.

The name of the town is even more interesting.  The word Osos means bears in Spanish.  This part of the name was given to the town/area by the conquistadors in 1541 because there were a large number of bears in the area.  We didn’t know that there were bears here and were even more surprised to learn that the Andean Bear or Spectacled Bear still lives in a narrow band of land that stretches all the way to Argentina – wow, good thing we still have a bear spray (from what I’ve read, we will be extremely lucky so see one of these bears – don’t worry Nancy!)

We wandered the main square, took some pictures of their impressive church and had another one of those grand Colombian lunch meals (another $9 for more food than two people should really eat).  I also got a haircut which was quite fun.  Nancy joined me at the barber and helped perform translation.  It is hard to hear when there is a clipper buzzing in your ear.  Somehow I got a haircut and a straight edge shave – when I only wanted a haircut – so much for Nancy’s translation skills! 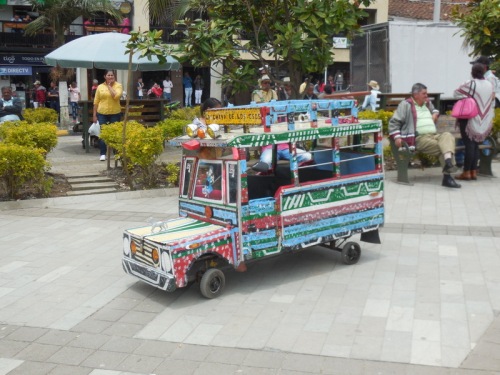 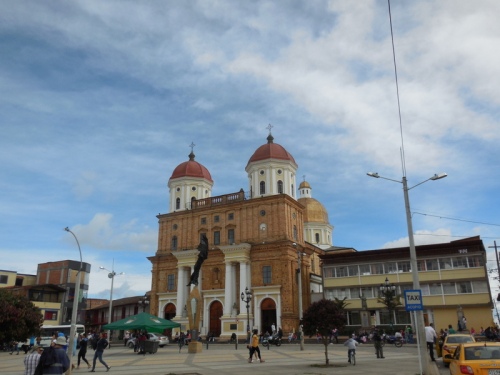 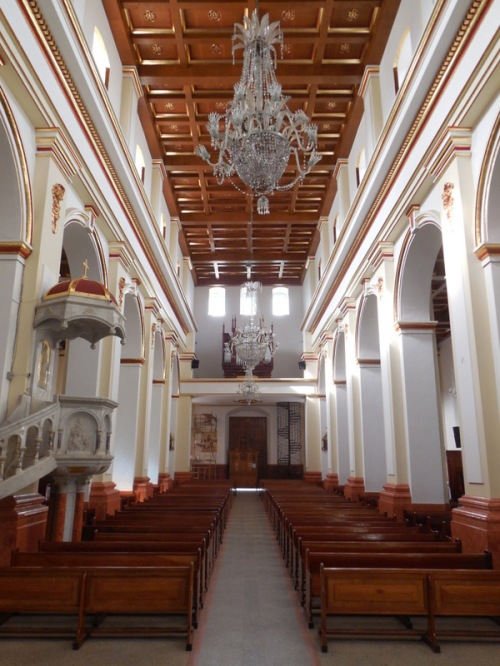 View the priest gets – nice ceiling 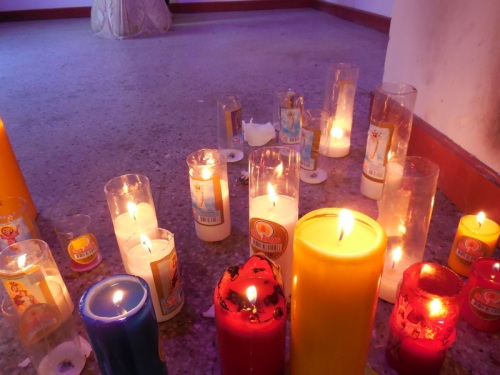 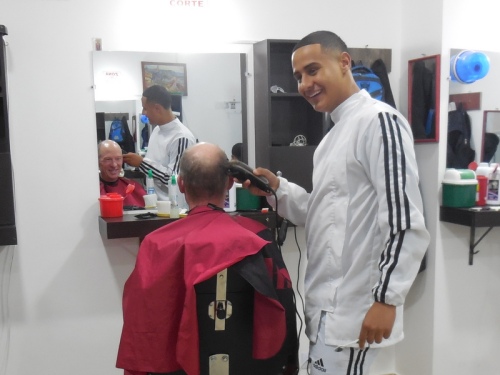 It’s all fun and games until someone (me) loses an ear!

We are now settled into our fancy hotel room resting.  We are staying in the Hotel Cortejo and it’s upmarket for us.  It’s not overly expensive but is has an amazing list of nice features – toilet seat, hot water, shower head, queen bed, sitting chairs and a writing desk.  Add to that it’s clean enough that Nancy announced that she “may not have to wear her sandals all the time” – now that’s clean.

Tomorrow we have a longer ride into Medellin – longer than the last few climbing days simply because we have a lot more down than up.  Medellin closes a number of major north/south streets on Sundays, just for cyclists.  We are hoping to hop on them and avoid the higher traffic normally found in a bigger city.  We’ll be in Medellin for a few days – depature date TBD…