South, finally!  Today we passed below 8 degrees latitude.  Nearly 3 weeks ago back on March 28; we flirted with 8 degrees south.  That was back on our first day in Panama.  The last 5 days in Panama we rode north – I know that’s hard to believe – fact check me if you will.  Then of course, flying from Panama City to Cartagena, Columbia, we flew almost 2 degree north as well.  In Cartagena, we were further north than we were on our first day in Costa Rica.

This is all pretty boring to all but the true geography nerds out there (namely me!).  But honestly, before now, who thought that Central America ran west-east and that Columbia was further north than Costa Rica.  If you’re still with me, try this one on.  The northernmost point of South America is Santa Catalina Island, Colombia at a whopping 13°24′03″N.  We were in El Salvador when we crossed 13.34 degrees.

You may ask how we have all of this geo- data (or maybe you’ve lost interest and are doing something else already).  Well, the answer is that we have a SPOT device that we use every day to capture our longitude and latitude, as well as send a “We’re OK” message to our mothers.  SPOT works fine most of the time but it does require fairly clear sky and no trees or buildings.  You basically set it on the ground (in the hot sun), turn it on and start watching for the OK email.  Sometimes, like today, it takes 4 or 5 cycles to get it to go through.  This is just about as much fun as you can imagine – standing out in the equatorial sun hitting the email refresh button on one’s smart phone.

In addition to being “south” again, we are also now officially in the foothills of the Andes Mountains.  The road from Cartagena to here was mostly flat to rolling but I guess that each little roller has netted some level of altitude gain.  The town we are in today, Caucasia, bills itself as being in the foothills of the Andes so who am I to argue.  We have to go up some 5,000 metres to get from here to Medellin but the next day and a half are more of this rolling hills terrain.

We really enjoyed today’s ride again.  Even though we are at the tail end of the dry season, everything is very lush and green.  The rolling hills reminded us of Wales or maybe Kentucky.  Ranching is clearly a big business here as most of the fields are dotted with cows munching away.  The highway from Planet Rica is mostly new pavement and super smooth with a great shoulder.  This makes for easy riding as you can look around and not have to worry too much about road debris. 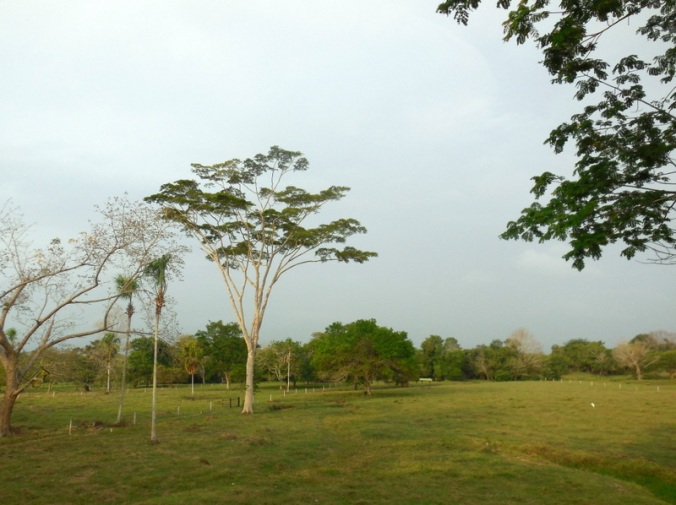 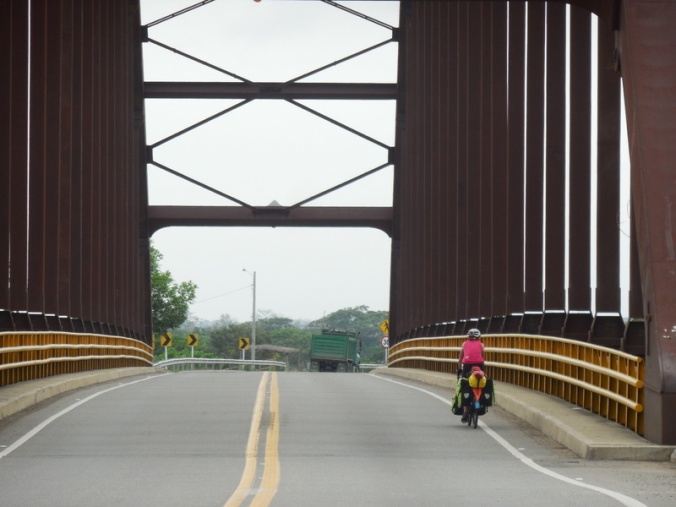 When the road wasn’t smooth, it was being worked on.  There are a number of highway sections where they are still laying new asphalt.  On most of these, they stop traffic in one direction with flaggers.  We stopped at the first one but soon realized that motorcycles and bikes don’t really have to stop so we just started slowing, waving at the flagger guy and moving on.  We had to be careful when the one lane had oncoming traffic but given that we were not the only ones riding this way, traffic was not surprised or upset to see us.

We stopped in La Parted for morning tea and to kill time.  We chose to ride 70k today because the next town would have made the day 120k.  Only trouble was that the smooth roads meant we made really good time.  We’d ridden 50k by 9AM and knew that the hotel would not let us check-in at 10AM.  So we stopped at a bakery and tried out some of their fried treats.  The little round balls are called buñuelos and are supposed to be a treat.  I wouldn’t say that they were bad – anything fried is bound to taste ok – but they were kind of just fried dough with not a lot of flavour – so not super exciting.  Though I will admit that we tried them again later in town for afternoon tea.  They are fun thing to eat while on a bike trip – they will certainly be off limits if we start living normal lives with normal calorie consumption. 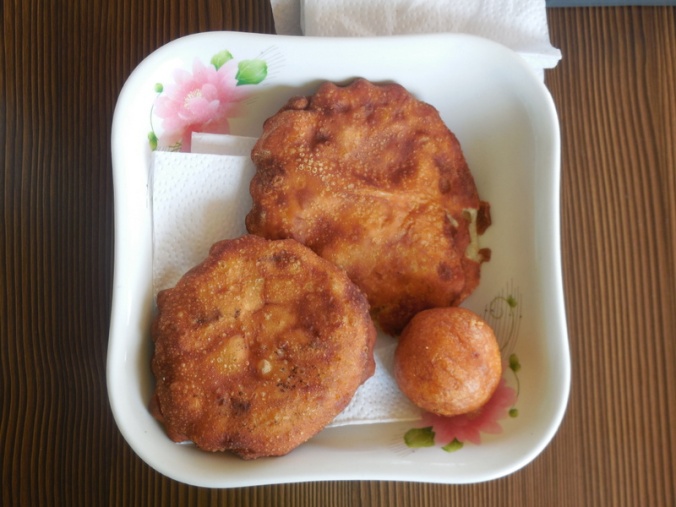 Two ham and cheese pocket things and a ball 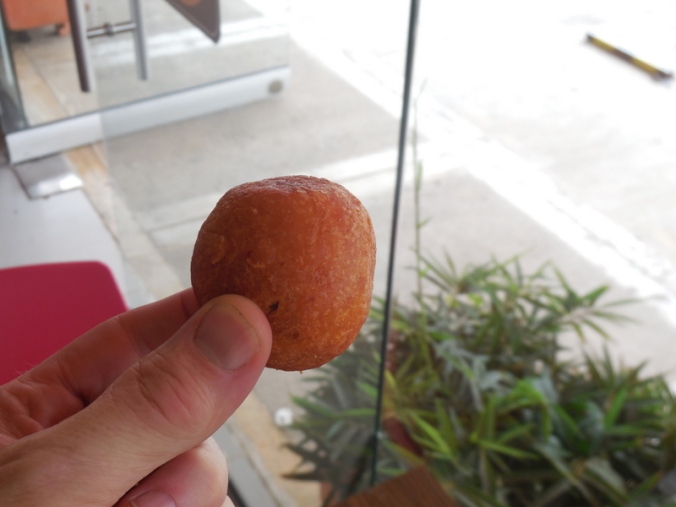 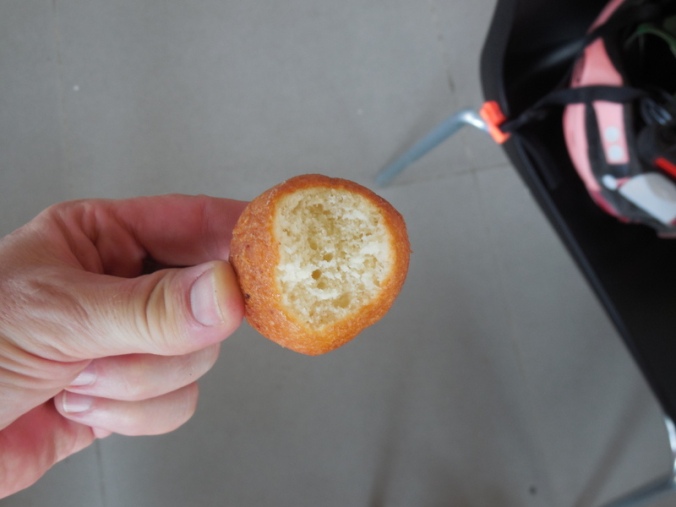 Buñuelos minus one bite

We eventually pulled ourselves away from the bakery and rode the last 20k to Caucasia.  We arrived at the Hotel Caucasia just about 11AM but they let us check-in early.  Our room is almost twice the cost of rooms the past few nights and it is nice, but not overly spectacular.  We have a shower head for the first time since Cartagena, but Nancy had to install it and it didn’t really work – it’s the thought that counts.  And we have a toilet seat cover but no toilet seat – I’m not even sure how that works.

Ready to be installed

Seriously, that’s hard to do!

I was responsible for checking out the room today – and I saw the cover.  Fool me once, shame on you, fool me twice….  Now I know, you can’t assume there is a seat, just because there’s a cover (seriously, that’s just crazy – who thinks to look for a toilet seat cover when you check into a hotel – adventure travel!)

We wandered town a bit and found another bakery.  The second trial of buñuelos was just about the same as the first.  I also had a milk bag – that is, a milk that comes in a bag.  It’s a little like the water in a bag – a good idea to reduce plastic but what do you do with it once it is open.  Today once of us had to kind of hold it while we enjoyed our bakery treats.  Nothing more relaxing than holding a slippery bag of milk while having a break.

I’ll just hold this milk while we sit and relax, sure, that works…

Tomorrow we have another shortish day with about the same amount of climbing.  If it is like today, no worries, just another cruiser spin in the foothills of the Andes.  And best of all, it’s all downhill (make that south) from here.