Sleep in the hotel last night was easy.  There was no one outside our room solving the world’s problems and in fact very little noise at all.  We both got a little hot sleeping in our sleeping bag, rather than the using hotel provided sheets.  It was not perfect but a definite upgrade from the night before, at least in terms of noise – and for sure we woke this morning feeling more refreshed than the day before.

The route out of town and the first 15k+ to Monteria were on a bike path that was separated from the highway.  The highway was 2 lanes in each direction with a wide shoulder.  As it was Sunday there were a lot of folks out exercising, including heaps of recreational bike riders.  We even saw a couple fast groups out on the highway, with sag vehicles with spare wheels.  We rode on the bike lane even though the road traffic was light.  We were not in a hurry and using the shoulder sometimes aggravates the car drivers who think we don’t belong there. 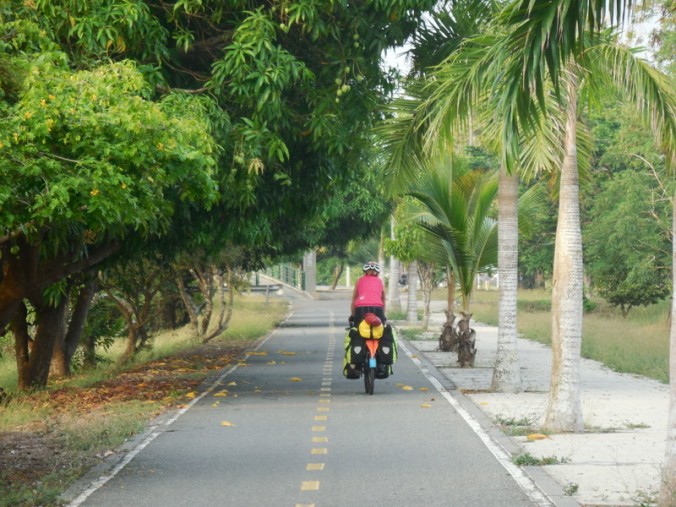 Seen on bike path where it crossed a driveway – nice to have my dual suspension mountain bike for the path!

At the city of Monteria the bike path went right past a McDonalds and even though it was early and we’d only ridden a short distance, we pulled in for a second brekkie.  We were the only customers and service wasn’t too slow.  Maybe all the folks out exercising stop there on the way home – the strategic location right next to the bike path seemed well thought out. 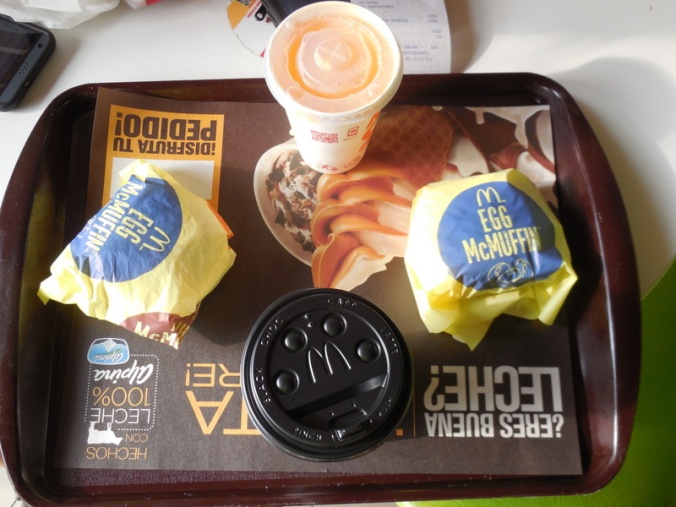 A short distance after Maccas we came upon a small outdoor cycling velodrome where rollerblade races were under way.  We were in time to watch the 5 year olds do one lap sprints – cute kids.  It was obviously a very serious event as all the kids had body suits on, there were a good number of sponsor tents and lots of parents made for a large crowd.  Good to see so many kids getting exercise and not be glued to their screens.

Soon after the velodrome, we turned off Highway 74 and onto Highway 23 where we lost the bike path.  The next 50k to Planeta Rica was mostly new pavement and there was a nice wide shoulder.  We saw so many cyclists out riding here, we thought that there might be an event on.  We couldn’t see numbers on anyone so we don’t really know.  There is a mountain bike area about 5k from town and most of the folks we saw were on mountain bikes so maybe everyone was just riding back from the park.  After the park the riders thinned but we saw another road group with a support vehicle (it could have been one of the earlier groups – we aren’t sure).  Whatever the reasons, it gave us a nice vibe to be out with so many other riders.

Looked like the front guy was just getting ready to jump

About half way to Planeta Rica, we pulled over at a servo for cold drinks.  The station was run by a family and Mom, Dad, a son and daughter were all working the counter.  I grabbed my camera to get some photos prompting Nancy to say that maybe I shouldn’t be too invasive.  It was all fine however as I was only taking pictures of the families 3 small green pet parrots.  We learned from the young daughter that the birds were 7 years old.  They clearly had their wings clipped but were also very tame and well looked after.  They were more than happy to play with the girl and then with Nancy.  We’ve been trying to get a photo of these birds in the wild with very little luck – they are so fast and generally very nervous – gone long before I get the camera out. 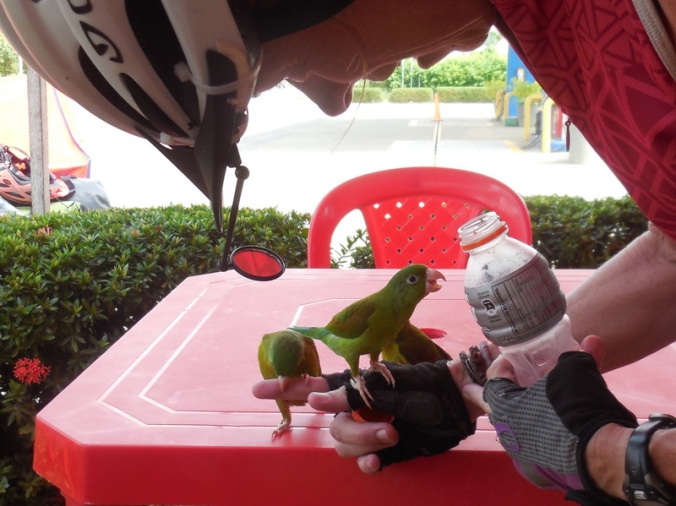 The road between Monteria and Planeta Rica was rolling and I think we climbed up to 500 feet higher before heading back down.  It didn’t seem that hard however as the smooth surface, slightly cooler temps and general cycling vibe put us in really good moods. 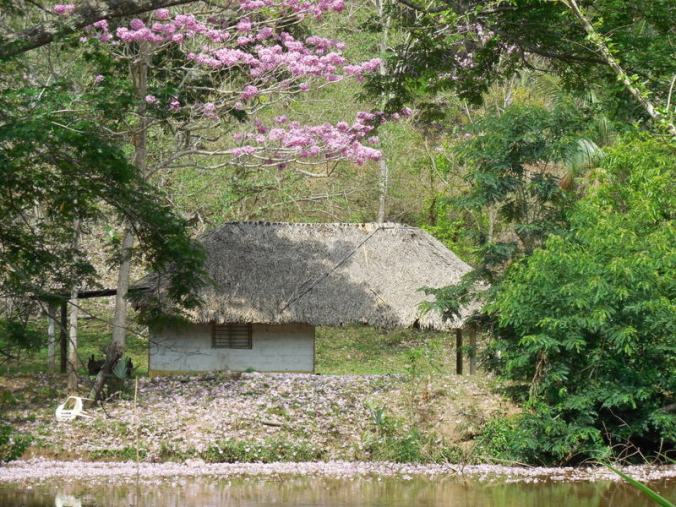 When we arrived in Planeta Rica we had a hotel picked out (Hotel Casas Blancas) but saw a few more on the ways to ours.  Hotels in this town are odd – second story affairs with only a small door leading to stairs and a sign down on street level.  None of the hotels looked overly attractive.  We kind of wandered a bit before just going to the intended hotel, where Nancy went up to have a look.  Much to our surprise, the hotel is OK.  Nice room, AC, good WiFi, warmish shower and pretty clean.  There is still no shower head but we’re kind of getting used to that – but there is a top sheet on the bed, so we are happy.

Nancy at our hotel

We took the scenic route through town getting to the hotel so we didn’t feel overly obligated to get out and see the sights.  We found a spit roast chicken shop just across from the hotel and had a nice pollo and papas for lunch.  It was cooler today than the past few days but it is really hard to leave our AC equipped hotel rooms when it’s hot.  By cooler, I mean less than 100 but probably still over 90 and humid.  We’ll be heading into the mountains in a few days – lots of climbing, cooler temps and maybe a few more strolls through the town squares in the afternoon.

Another new sign – I’m kind of blah on this one

This is how you buy water in Colombia – 6 liters bag with less plastic, but it is hard to pour and doesn’t stand up unless you put it in the corner.

Tomorrow is another day like today – mostly flattish, not too long and a list of hotels to look at when we get there.  Nancy is the Queen of hotel research.  I cut off her internet access before she gets to sheet thread count per hotel – I tease her but it is nice to have a hotel target when pulling into a new unknown town.