Well, we lucked out last night as the competing Calypso music on the waterfront knocked off relatively early (around 11pm, we think).  But, instead of a nice quiet night of sleep, we instead were treated to other guests of our hotel sitting out on the balcony of the hotel on our floor right outside our room talking and laughing very loudly for literally the whole night.  There must have been 10 people out there chattering away and there was no attempt to be quiet as they yelled back and forth to each other.  And there were some really grating voices in the mix of people – or perhaps that was just after hearing it for hours and hours in the middle of the night.

When our alarm went off at 5am and we turned our light on the remaining idiots slunk back to their rooms.  We should probably have turned the light on in the middle of the night and gone out to ask them to be quiet but I’m afraid our Spanish isn’t good enough and we were a bit worried about the safety of our bicycles, which we had to store down in the courtyard, accessible to all guests.  So, instead we kind of half slept throughout the night, waking at regular intervals to ‘enjoy’ the continued chatter.  Grrr.  I am sure it would have been a lovely relaxing night but for those obnoxious guests.

(junior editors note: seriously, what possibly could anyone talk about for 5 hours – between midnight and 5AM.  Solved all the world’s problems for sure.  Stand-by, I’m sure their outstanding analysis and memo are forthcoming!)

We were on the road by 6:30, somewhat sleepy but glad to be on our way out of town.  We continued along the coast for just a little bit before the road turned inland.  I think that is the last of the Caribbean Sea that we will see.  We passed by another beach resort area, with lots of hotels, cabanas and accommodation.  It was quite of mix of the old and the new – clearly some of these little places have been here for a long time, but interspersed were what looked like some relatively new fancy beachside condominiums. 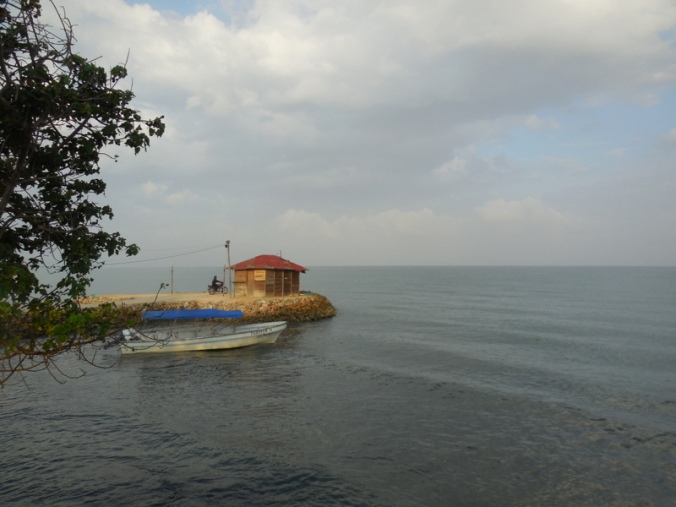 Last views of the Caribbean Sea

We had a mostly flat ride today, with a few rollers to keep us occupied.  It was very warm already when we left and the humidity makes it feel much hotter.  Sweating starts immediately as we ride, and even Dave ends up with his shirt soaking wet – and that is saying something, for those of you who know Dave and how little he usually sweats even under the hot Australian sun.  Not surprisingly, the humidity doesn’t seem to bother the locals much, though I notice many of them carry with them a little towel that they use to dab of any moisture that might develop.  I think I’d need a big beach towel to be of any use to keep up with the moisture dripping off of me! 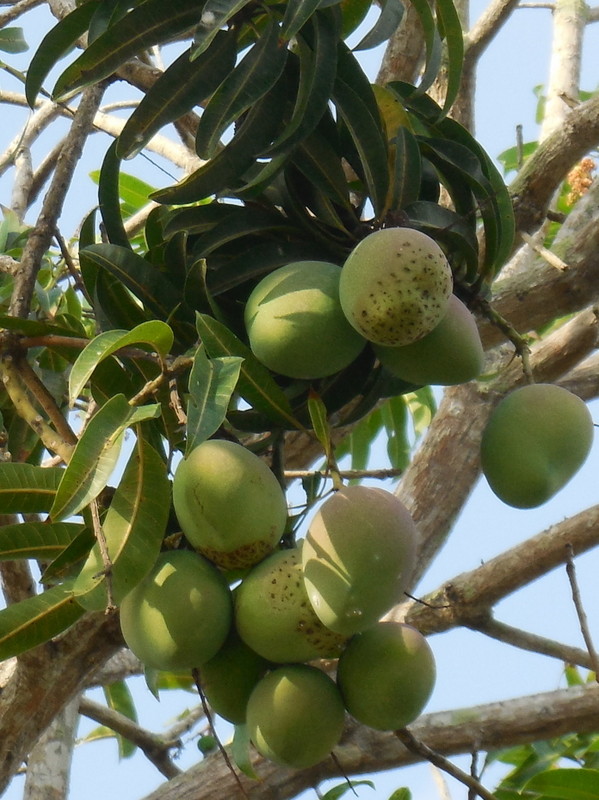 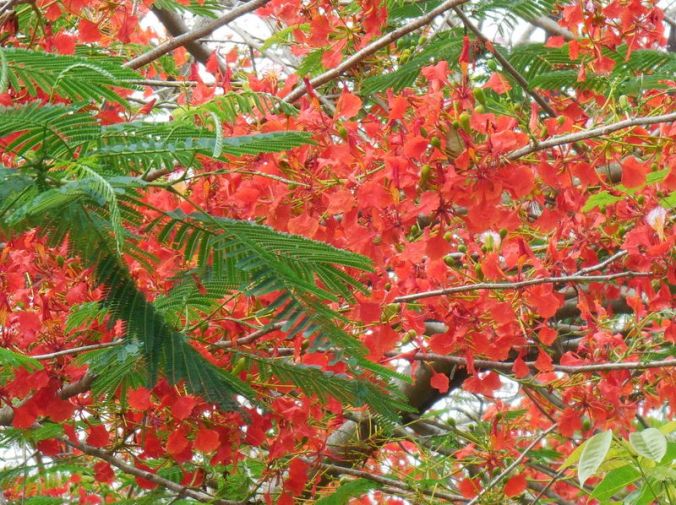 Lots of these trees today as well 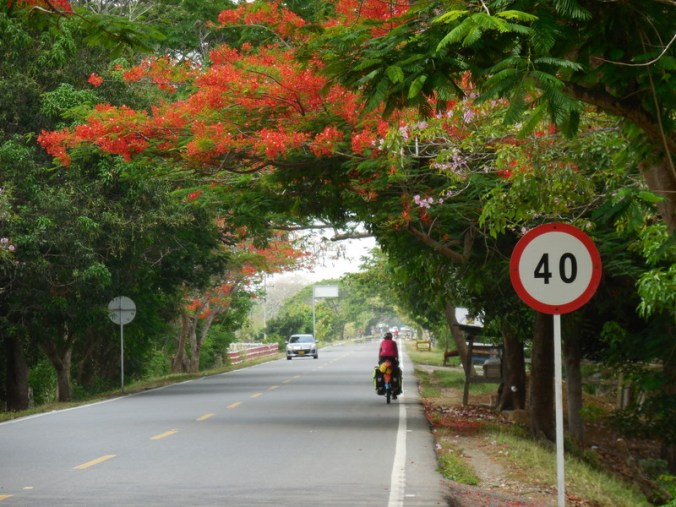 They make a nice covering from the sun 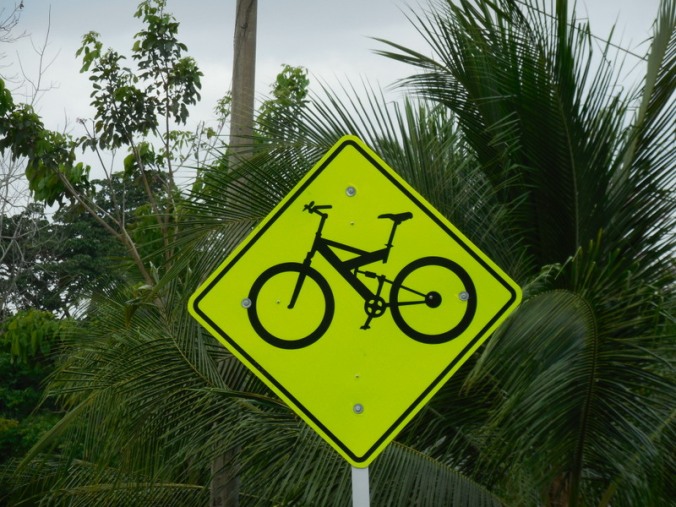 Wow – now that’s a detailed bicycle warning sign – a high-end dual suspension mountain bike.  I’m not sure so much detail makes us safer, but it does make us laugh.

We stopped for morning tea in a town called Lorica.  There were several bakeries and we picked one and pulled in.  Lots of different treats in the case but of course no signs so I bumbled through picking a few things to try.  As we sat and ate our pan de queso and rolls with some unidentified sweet stuff in the middle, two fellows came over and were very interested in hearing about our trip.  It is always a bit of a struggle to understand such fast Spanish but we talked to them for a bit and almost, kind of, carried on a conversation. 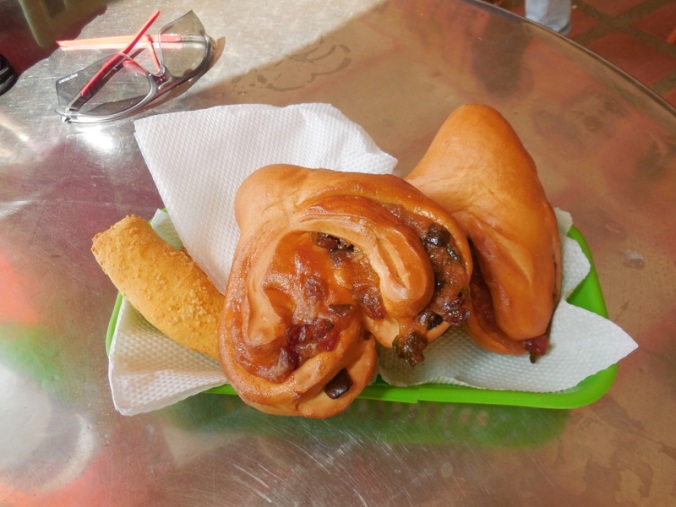 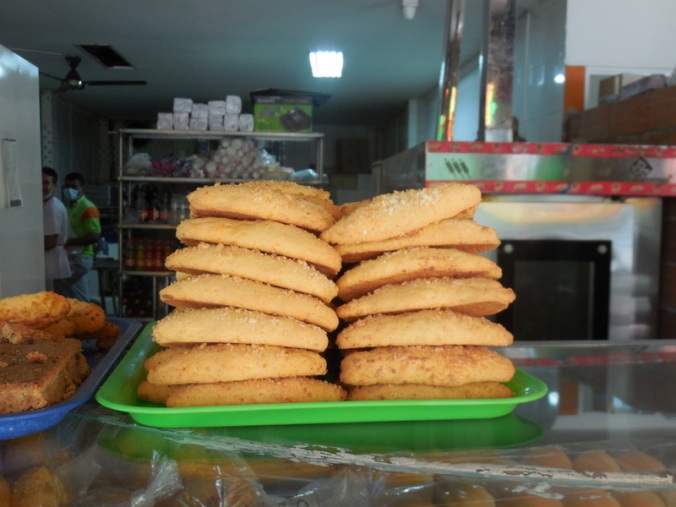 We bought a stack of these cheese rolls

Today on the road the number of cars was distinctly less than we have had the last couple of days.  Instead, motorcycles seem to be the choice of transport (in addition to the ubiquitous chicken buses).  Any place there is a little village along the road, or an intersection with the road that leads to a village, motorcycles zoom up and down, tooting their horn to see if someone needs a ride somewhere.  They are often also clustered around the intersection and anywhere a bus lets off to try to catch passengers.  Oftentimes the road is full of motorcycles going each direction, zipping around each other or riding two or three abreast.  And they often have more than one passenger.  Today we saw a woman with three kids on the motorcycle with her.  It’s a bit reminiscent of what we used to see in SE Asia. 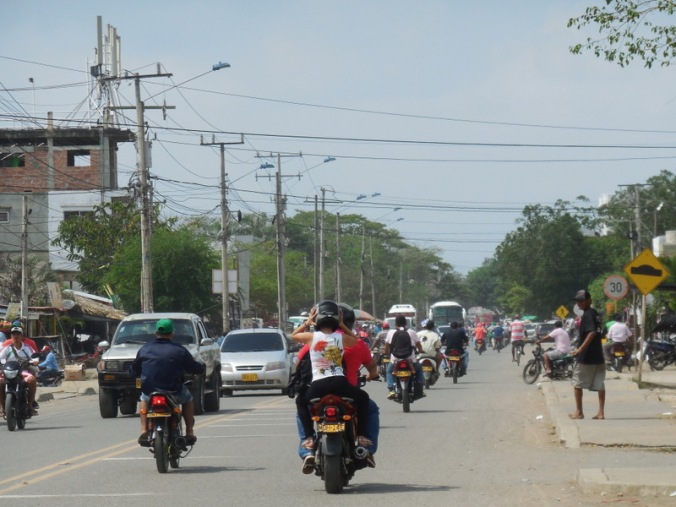 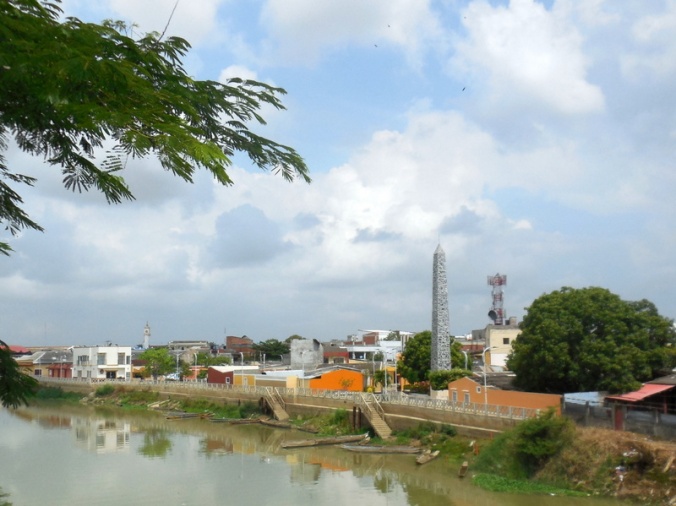 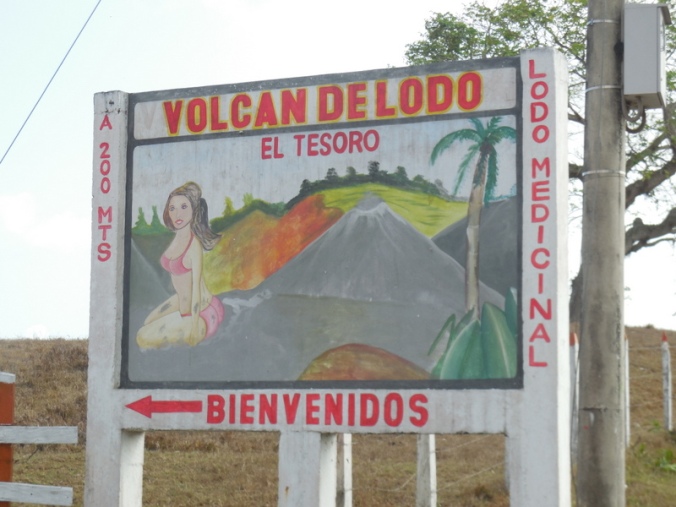 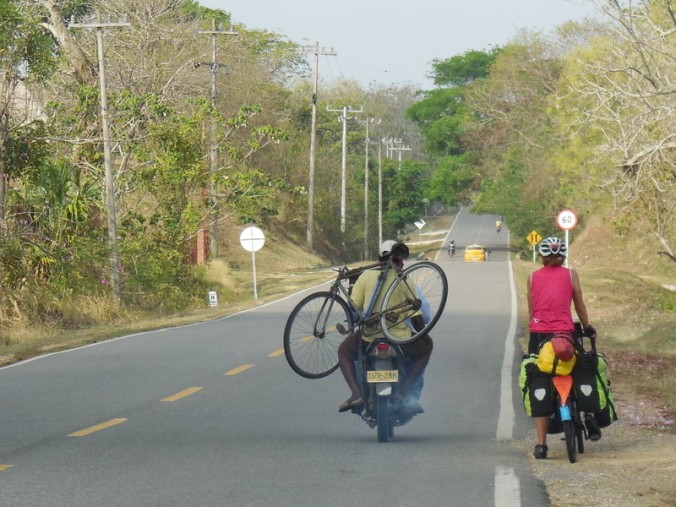 We made it to our intended destination of Cereté by 12:30 or so.  We were both feeling a bit tired and peckish, so as soon as we found a hotel we popped into a restaurant right next door for a ‘plate of the day’ lunch.  We both picked the fish – tasty, and with soup, rice, salad and the always available fried plantains it was only $5, so a real bargain. 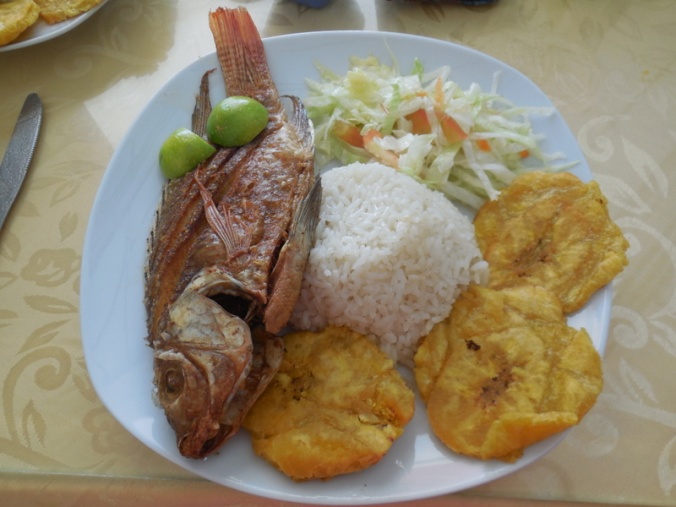 Lunch – better than it looked

The Hotel Santa Cruz Cereté, where we are staying, is serviceable.  No hot water but good Wi-Fi, toilet seat but no top sheet, only a bedspread (I really do not like that, as I expect they don’t wash the bedspread after every customer – eww).  A bit funny though, after I got my shower Dave tried to take one and after a minute or two the water petered into nothing.  I went out to check with the hotel clerk and after running around a bit he came back to say (I think) that the whole area was out of water.  Hmm, what to do?  I ended up with a bucket of water to take to Dave, who was standing in the shower, waiting expectantly for water to come out of the shower pipe (no shower head, of course).  He made do with a bucket shower, and the water has now come back on so crisis averted. 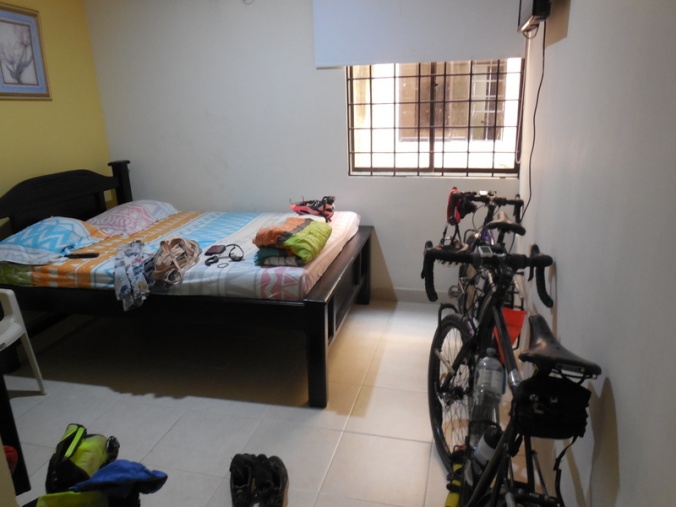 Tomorrow we have a slightly shorter day planned to a town called Planeta Rica, where we will connect back up to the main north-south road that will eventually take us into Medellin.