We’ve had a restful yet exciting day here at Cabanas Canas Castilla Eco Lodge in the Costa Rica rainforest.

First a quick update on the German camper crew that we met yesterday afternoon.  There are 18 rigs (mostly with two people), 17 from Germany, 1 from Belgium.  They all purchased their rigs in Europe and shipped them to Buenos Aires for this trip.  They drove from Buenos Aires to Ushuaia, turned north and drove here.  They drive as a group to Tombstone Arizona, but many of them will also continue all the way to Alaska.  Some will even drive across Canada before shipping their rigs from Nova Scotia back to home.

None of the couples knew each other before the trip and they will travel together for the better part of a year – brave.  We sensed a little tension but how could this not happen with a trip set up as it was.  At least at this point more than half way, no one had dropped out and we didn’t hear of any fisticuffs.  Only a few of them ate at the lodge – most just used the lodge as the stopping point for today and cooked their own food in their rigs.  Unfortunately, they were all gone this morning when we got up – we didn’t get any tips from the road ahead from them.  Still it was interesting hearing about their trip.

Before dinner last night I went out for sunset photos from the lodge deck.  The light was poor so I gave up and walked a little ways into one of the forest paths.  As I originally only intended to go to the deck, I was wearing flip-flops – yes, completely inappropriate footwear for a rainforest trail.  This actually worked out fortuitous as with limited progress being made on foot, I did a lot of standing and listening.  Just at dust, I heard some rustling in the bushed and out popped what looked to me like an anteater.  What luck!  I snapped a few photos and returned to our room. 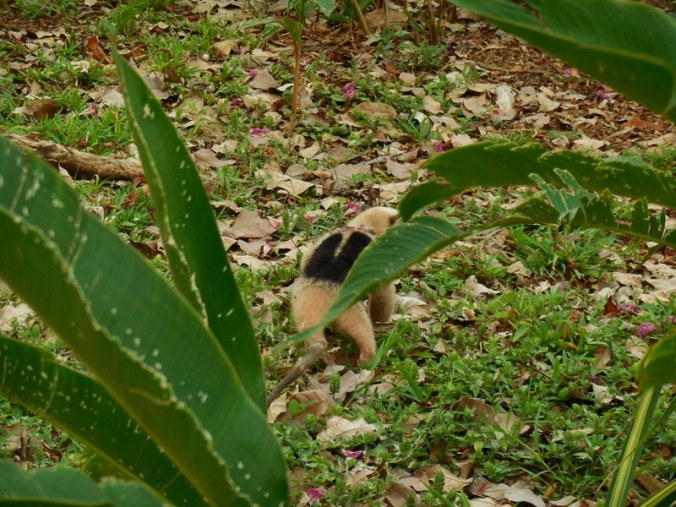 Later at dinner I shared this story with the owners and learned that I was extremely lucky.  No, not lucky to have not been bitten on the big toe by a snake, but rather lucky to have seen an anteater.  In their 20 years here, they’ve only seen a couple and had not seen one in over a year.  My photos were not great, but at least they proved that I was not some crazy tourist making things up.

Because the fancy cabanas at the lodged were all booked, we stayed in a budget room.  It worked out just fine.  The fan in the room and a screened open window kept us comfortably cool all night.  We slept great.  We were up at 7AM for brekkie – sort of early for a rest day but we didn’t want all the German camper folks to eat all the good stuff.  We needn’t worried, all but 2 of the campers had left by the time we got up.  Still it was nice being up in the cool morning air and we enjoyed a wonderful brekkie on the restaurant deck.

We spent the next four hours hiking two of the lodges rainforest trails (with appropriate footwear).  We hoped that we would see some more monkeys.  We heard a few howler monkeys and saw a few spider monkeys but from the monkey perspective, we could have just hung out at our room.  Almost as soon as we returned, a troop of howler monkeys moved into the trees above our deck.  And a little while later, while we were eating lunch, a group of spider monkeys worked their way through the howlers and to the trees just to the right of our deck.

A break on the walk 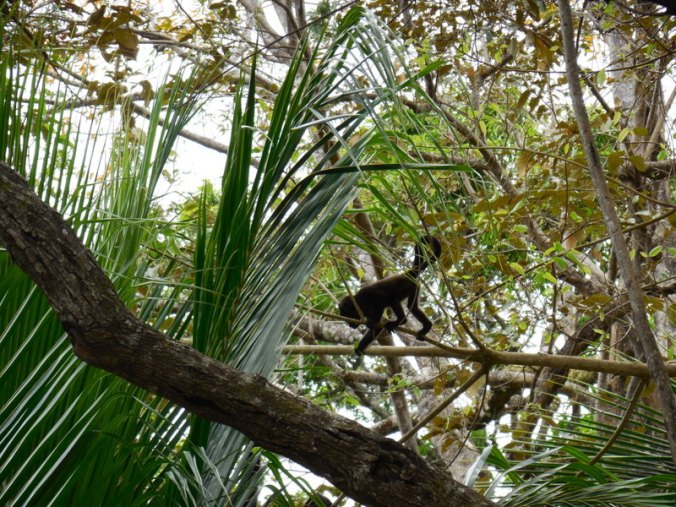 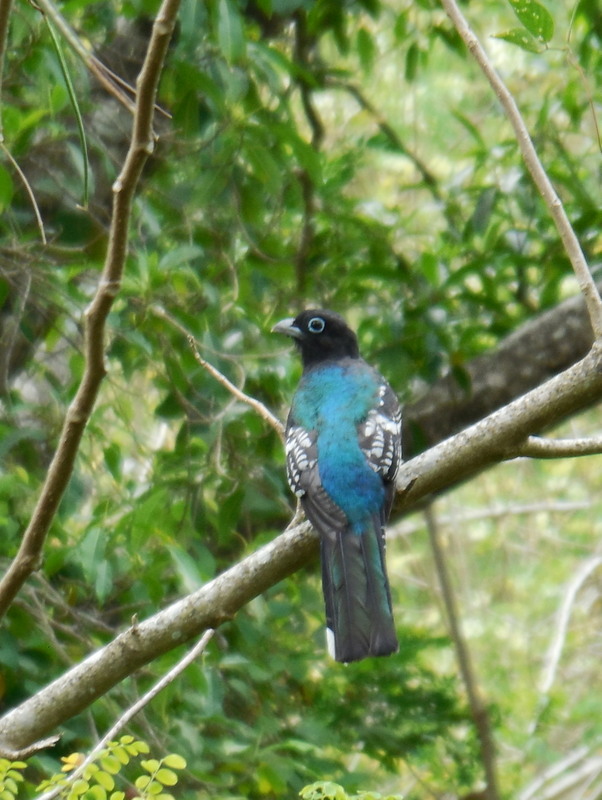 Both groups contained a couple mischievous youngsters but the adults were pretty active as well.  I don’t think we will ever tire of watching them swinging from branch to branch, eating, playing and just being monkeys.

Spider monkey on the move 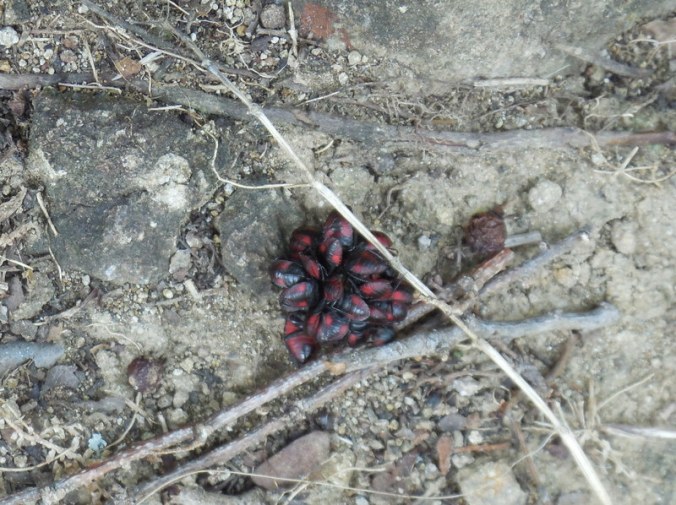 Agi, the co-owner of the lodge told us about a sloth and also that we could find iguanas down on the river bank.  I headed for the river and sure enough I spotted a large green iguana within minutes of reaching the bank.  I’m actually not sure how I would have missed it – it was much larger than I thought it would be and it made quite a racket running away from me.  Later I walked out to where the sloth was supposed to be and managed to find it right away as well.  Being early afternoon at this point the sloth was sleeping.  It kind of reminded me of a koala – wedged in the fork of a tree branch and not really responding to anything I said or yelled.  My photos turned out ok, as in a “fur ball in the crook of a tree” ok.

Iguana with boat for scale 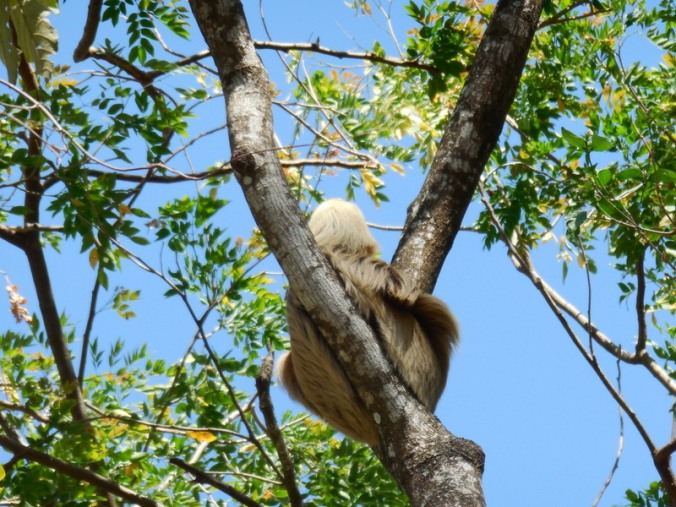 We are not on this trip to tick off list of things we’ve seen but if we were, we made pretty good progress here at Cabanas Canas Castilla.  It has been fun being at the eco lodge and actually quite amazing what Agi and Guido have created out of an old cattle farm over the past 20 years.  Today when the howler monkeys moved in, Agi was just as excited as we were – Agi and Guido certainly picked the right place to live if 20 years on a troop of monkeys can still generate as much excitement for them as it did for us.

Tomorrow we move onward towards Liberia.  We don’t have firm plans for more stops in Costa Rica but we’ll keep an open mind.  If further stops can be as interesting as our short stop here in the rainforest, well, we may never leave!