I awoke this morning with a hankering for Fruit Loops.  I’m not sure why, perhaps I bumped my head on the fruit headboard in the middle of the night.  Other than that, our escape for Hotel Fruitlandia was uneventful.  We had a longer day planned and were on the road by 7:30.  Pretty good for my travelling companion and her stuffy nose.  Not much else to do really, some days you just have to get on with it.

We retraced the 4k back to Highway 190 and turned left, this time heading south.  We had no shoulder all day but traffic was light and very considerate.  About 10k out, we reached Matatlan, clearly a center for the regional mezcal industry.  Not only did they have a big still on their welcome sign, their main street was lined with a bunch of small scale mezcal factories.  Some factories were smashing, some were cooking.  We saw a few more horse powered smashers.  For a shotgun main street, highway town, Matatlan didn’t look too bad.

From Matatlan we had our first real climb of the day but it was not too bad.  We were slow and there was some traffic but they gave us space.  At the top of climb, about 16k from Mitla, we had the beginnings of a couple great downhills.  The first one was about 5k, followed by a small climb, then a great 20k decent.  At times the latter was steep, we were happy to be heading down.  The views to the Oaxaca Mountains were nice and we had some fun cactus as well.  There must have been some rain here recently as the “whitetop” cactus were blooming, along with a few of the others.  Stopping on the downhill for photos was quickly frowned on by my senior editor – message received.

Look close, can you see the bird face? 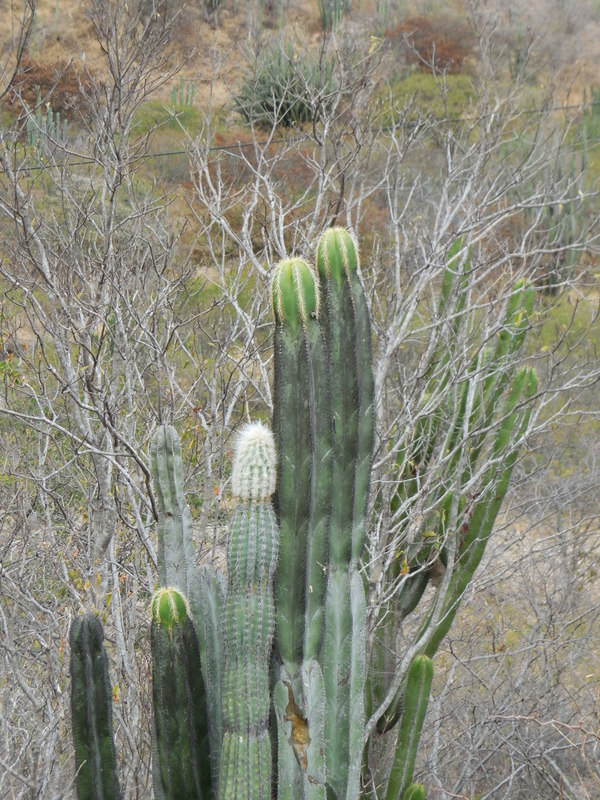 Cactus on the decent

We stopped for morning tea at the only Pemex of the day in San Pedro Todolapa.  Our second climb of the day started here and went on for about 6 or 7k.  The grades were not too bad and the road had a lot of switchbacks – slowing down what little traffic we had.  At some point on the climb we hit a small patch of “spit”.  I hate to even write the word rain as it was basically 3 drops each – enough to cool us off a little but so little that you’d almost think it was coming off the rider in front of you – Nancy was on the front. 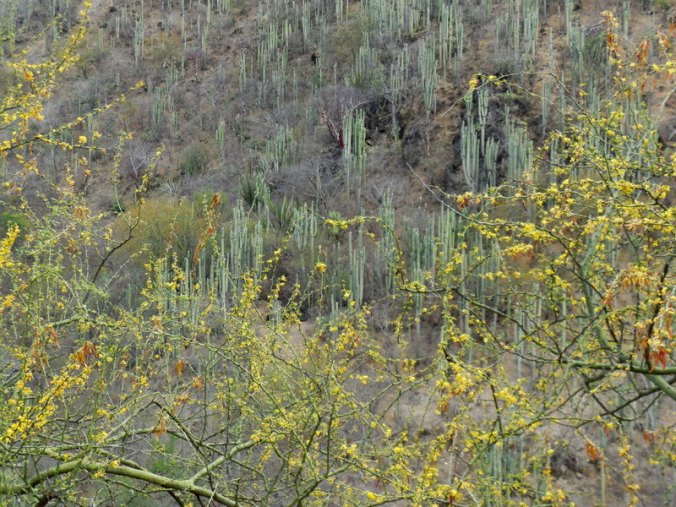 We crested the last big climb before 11AM and made pretty good time downriver to a small cafe for lunch.  We had our sandwiches and bought cold drinks to go with them.  It was cloudy but the temps still made it to the low 70s.  We never could figure out the name of the river we followed all afternoon.  Rest stops, summit signs and even information signs are not a big thing here in Mexico. We had some nice views heading down but a surprising amount of climbing as the gorge was too steep for the road to follow the river.  The road surface was stunningly poor at times but mostly on the uphills.  Going slow it was bone jarring – they shouldn’t have paid whoever chipsealed that road. 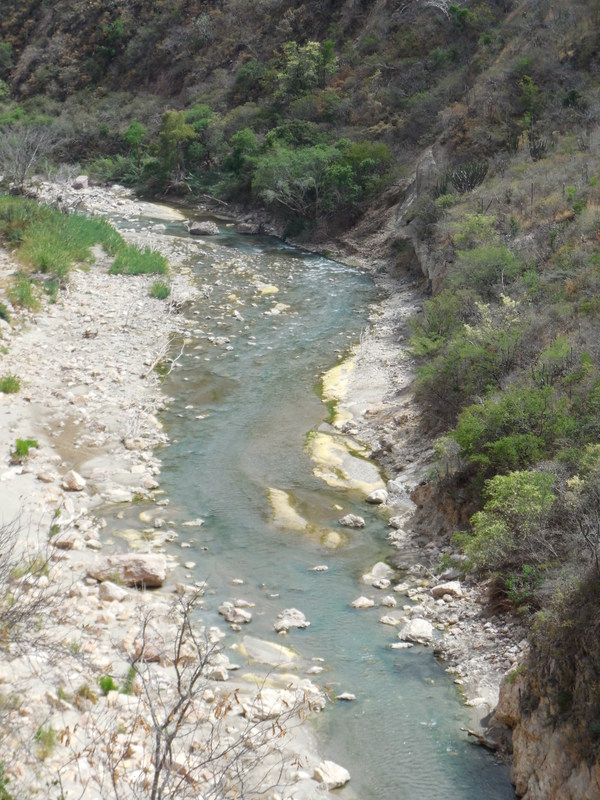 The last 10k was more up and down and we were both getting tired.  I got a second warning about too many photos but still managed to sneak in a stop at roadside field where they were cutting agave.  This particular crew was cutting the “bigger” ones and it looked like hard work.  The workers were happy however and happy for photos – perhaps to get a break. 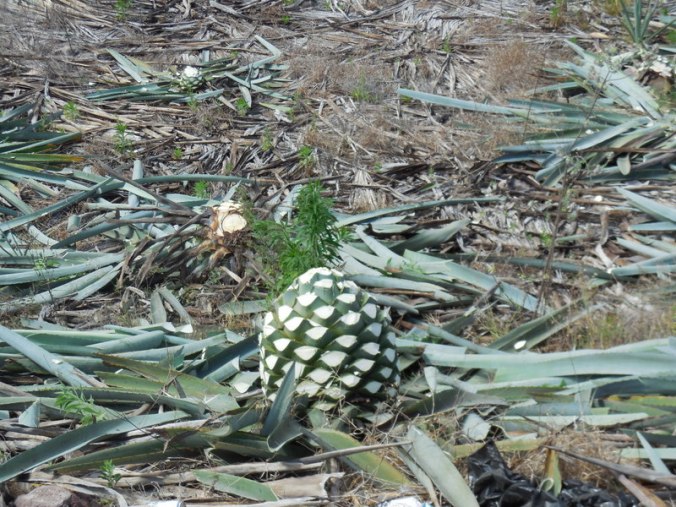 We pulled into town right at 2PM.  There are two hotels here.  We chose the one that had hot water.  There is no fruit tonight but hot water is about the only luxury at this hotel.  The room is very basic.  It was so cheap that we got sort of a double room – with two bathrooms.  Two bathrooms but only one toilet seat however.  And in that bathroom, my knees hit the wall in front of the toilet before my bun hits the seat – but I guess you do what you need to do to take advantage of a toilet seat.  I’m not really sure how you are supposed to use that toilet if you are over 5 foot 5 inches tall.  Like I said, it is not a fancy hotel.

Happy to be here, even if it’s not the nicest

The pool, I’d be doing laps now, had it had water

We are now getting ready to head to dinner.  There is one restaurant in town.  It is not fancy either.  We’ll be using Nancy’s scale to rate it – anything we eat that doesn’t make us sick – well, that’s a good result and at least 3 stars.

We have more of the same tomorrow – another 90k day.  The Oaxaca Mountains are rugged and nice to look at so at least they distract you.  Nancy is still feeling her cold, I’m nearly done.  Since I gave the cold to her, I’m an not allowed to complain if she coughs at night – not that I would do that anyway – haha.