We’ve had a short but interesting and productive day.  We were planning on a small town and hotel a little further than we stopped at, but it was off the direct route to Aguascalientes, our destination for tomorrow night.  We found a highway hotel at the turn off and decided to stay here rather than riding “off route”.  More on this later…

Our new room was super quiet last night and both of us slept great, until about 12:50 when someone with a key that opened our room tried to barge in.  Luckily Nancy had set the chain/physical lock to on so the person was stopped.  We both yelled something about being occupied (in English).  The person apologized and was not heard from again.  We should probably yell out in Spanish when this happens but our automatic language is still English.  After breakfast today, I tried using our key and getting back in the room – it didn’t work.  I think the paperwork to our room shuffle yesterday didn’t keep up with us, thus the late night guest and non-working key.  No big deal, we got it sorted this morning without too much difficulty.

The lift to our 5th floor room broke down sometime while we were down eating brekkie this morning.  I was not excited to discover this but luckily they fixed it while I was getting the key sorted.  I had visions of lugging our now loaded and ready to roll bikes down 5 flights of stairs – not fun.  By the way, we think that this was first lift we’ve been in while in Mexico.  I’m sure that there are other lifts in Mexico, but we generally don’t stay in places nice enough to have lifts.

The ride today was pretty exciting leaving town.  It was basically downhill along a somewhat busy 6 lane road all the way to the tollway.  Traffic was more than polite to us but we were riding into the sun – both we and the drivers were having a hard time seeing.  Luckily, we were going against the commute into Zacatecas.  I likened these first 13k to being on a rollercoaster ride – that is, you’re pretty sure that it is designed well and safe, but you’re not 100% sure that the cart won’t come off the tracks.  Yes, we were safe, but it was a little white knuckle riding for awhile.

Zacatecas University art – a quick stop on the roller coaster 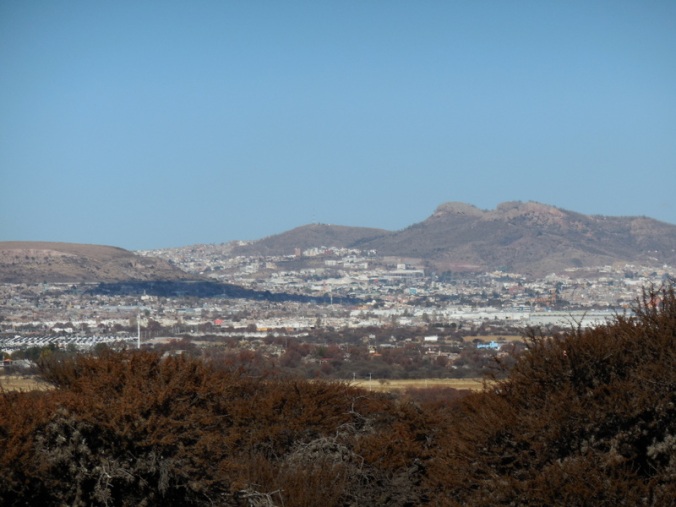 Zacatecas and its 1.6 million people disappear into the distance

We reached the end of the first section and had the choice of turning due south on the toll-way or continuing on a bit and taking the free Hwy 45.  We’d heard of other cyclist riding this route but we were not certain that it was legal.  We took the plunge and were surprised to find no bicycles prohibited signs.  Not only that, but the guard hopped out his toll collecting booth and moved a barrier for us.  Ok, so this was completely legal – great.  We had 35k of toll way riding – it was not too bad.  Toll ways here seem to be only two lanes, one each way, and a massive shoulder.  Trucks and slow cars drive nearly continuously on the shoulder but everyone pulled into the proper traffic lane long before they overtook us.  It sure is nice to ride with rear-view mirrors so we can check to make sure traffic is in fact moving back into the lane. 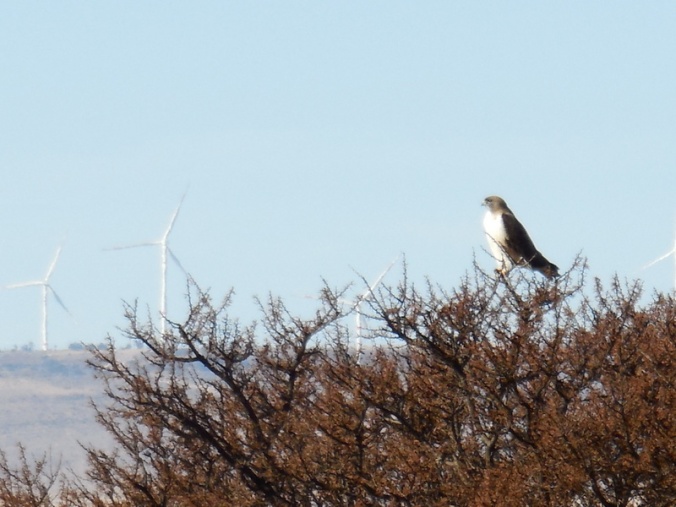 Bird of the day – hawk in tree 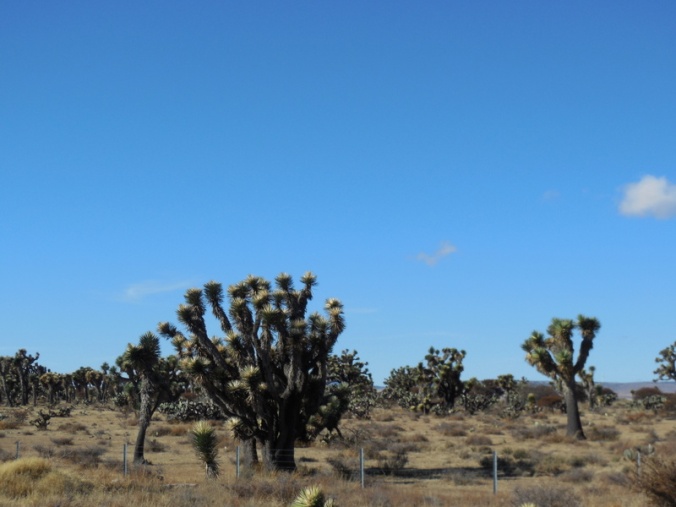 Back into the desert now

Not a cloud in site, in spite of the warning sign

So, we finished our planned chunk of toll-way riding and pulled up at an Oxxo for lunch.  Note that there are no on/off ramps, even though we were on a toll-way, you just pull over – be careful if you have to walk across the road, as trucks and cars not stopping don’t slow down – it’s a toll-way with no limits on access.

Anyway, we were getting stuck into our lunch.  Yes, Nancy had more noodles – don’t judge her until you’ve tried them on a cool winter day.  While eating, a nice local chap named Alejandro stopped to talk to us.  He was from Aguascalientes and heading to the border with Texas to import some goods.  He spoke great English.  We eventually got around to talking about our planned route and he told us that we shouldn’t go to the town we planned on going to.  Ok – local knowledge is always a good thing – we decided to check out the highway hotel just across the road.  It was more than adequate and we called it a day.  We spent the afternoon cleaning the bikes so a short day was not wasted just hanging out – we got some maintenance done as well. 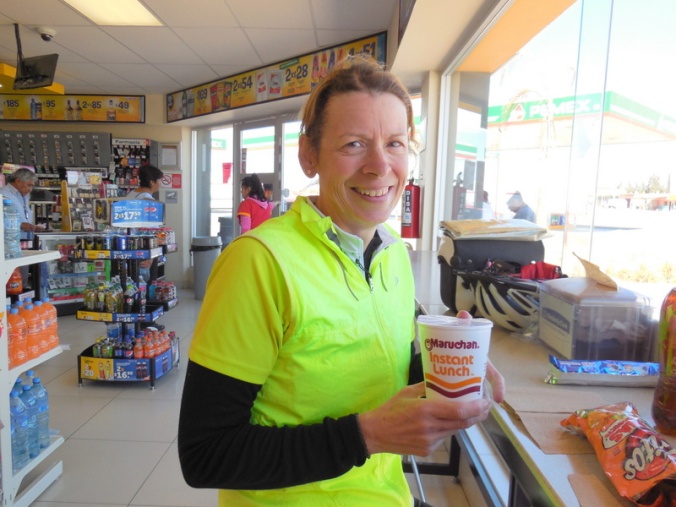 Ok – so what’s a highway hotel.  It’s a basic/normal Mexican hotel.  We have a bed, a bathroom (with toilet seat), TV and WiFi (though it is slow).  What’s different about a highway hotel it seems is that most people only stay here for an hour.  And by “people” I mean couples.  You have to honk your car horn to get in the parking lot (which is hidden from the road) and honk your car again when you want to leave.  It seems odd to me that people only need an hour but I guess when you are tired, a quick one hour nap is all that’s required to get you back on the road.  Whatever works I guess.  While cleaning the bikes, we heard lots of toots for people wanting in and out.  The poor guy running the place has to be on his toes as the gates are all manual.  We’ll see how this works out for sleep – the price and location were great.  I think it’s probably a good thing that I asked for “una noche” when I checked in, just so that the manager knew we needed more than a quick nap. 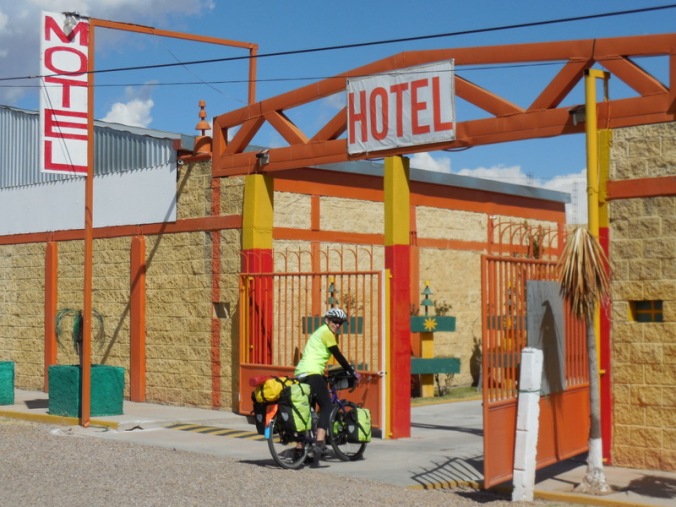 Heading in for a one hour nap 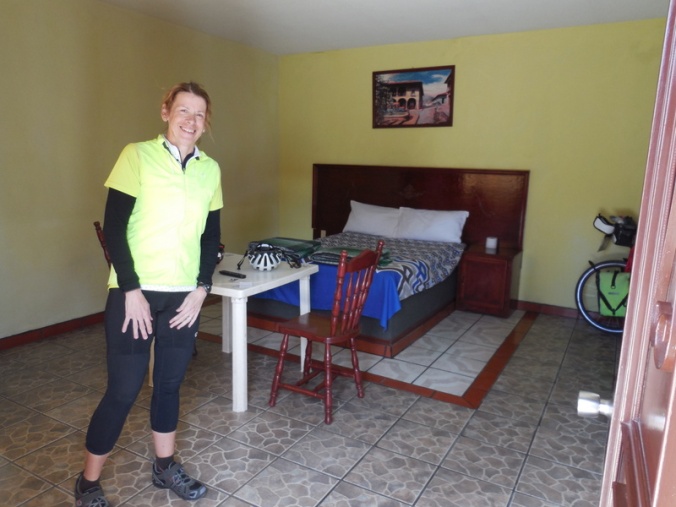 Nancy getting excited about….  cleaning the bikes

We are now about ready to run (quickly) back across the highway to have dinner at the all-you-can eat Mexican Buffet.  I think that it’s a normal buffet but then again, before today, I thought hotels were just hotels.  Tomorrow we have a little further than today to ride to reach Aguascalientes.  We have another one of those “free points” nights at a central city business hotel.  At some point we’ll run out of points but for now, we are enjoying a little extra luxury at no cost, so what the heck…