A bit of a rough night in the old Hotel Samantha last night.  Someone had had a fire in the fireplace in the room recently and the smell of smoke was still quite strong so we both tossed and turned a bit during the night.  Knowing we had a relatively hard day ahead of us we were up at 6am (which seemed to come very early) and packed and ready to ride at 7:30.  Nancy pointed out a very large spider on the wall as we were packing – thank goodness she didn’t see that last night!

Today was all about the El Espinazo del Diablo (The Devils Backbone).  I’ve been dreaming of this road every since we started planning for riding in Mexico.  The past two days were very scenic.  Today was off the scale.

El Espinazo del Diablo is technically located at kilometre 168 of the Mexican Federal Highway 40 (mile 0 is in Durango).  We started our ride this morning at kilometre 200 so technically we had to ride 32 kilometres before reaching the Devil.  I kept thinking, if this is the dull part, I can hardly wait to see the Backbone.  The road snakes its way up and along a set of cliff faces following the contours of what must have been a crazy road to build.

We had lots of ups and a few downs – climbing 4,300 feet in total today.  We only travelled 36 miles but it took us six and half hours.  After the past two days, we were both feeling our legs from the start but the views did a pretty good job of keeping our minds elsewhere.  Just outside of El Palmito, we crossed the Sinaloa to Durango state line – we didn’t stop to pose for photos because we knew we had a long day ahead of us so I just snapped one as Nancy rode under the sign.  We stopped for water and a snack about 11k out at little town called Revolcaderos.  We learned that there are 35 people living in town, that they have great water (a spring) and a school.  Note that all of that was in Spanish with the old gal running a little restaurant – so we are getting by okay after our two months at El Nopal.

I tried not to overdo the photo stops and did pretty good in not slowing us too much.  I would normally ride ahead and take a few pictures while Nancy caught up.  This meant that I got several bonus uphill time trials on a loaded touring bike.  I didn’t really need this but someone had to get the some photos.

How could I pass the longest long drop toilet in the world?

Our road on the far side of the ridge 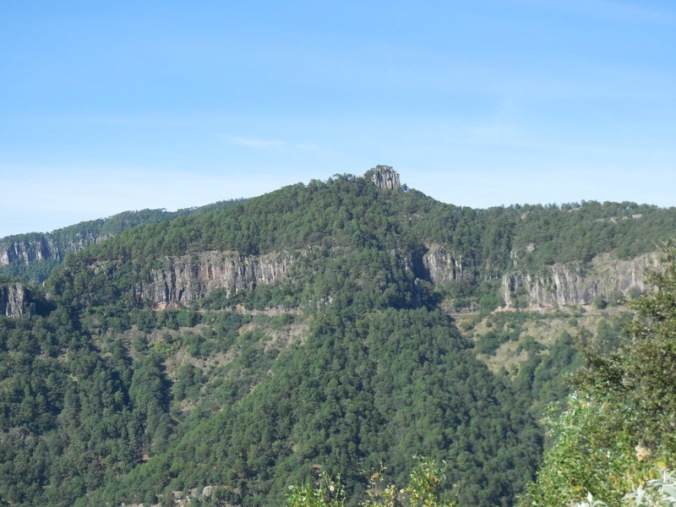 Our road again on a different ridge

We took a few more little breaks and worked our way up the mountain – beautiful scenery continued.  Eventually we reach kilometre 168 and the start of the Backbone.  This was the first place where you could see off both sides of the mountain.  Views off either side were stunning – ranges and canyons extending as far as the eye could see.  Of course we snapped few photos of the “Ruta 666” sign that someone has cleverly pained just below the organ pipes at the start. 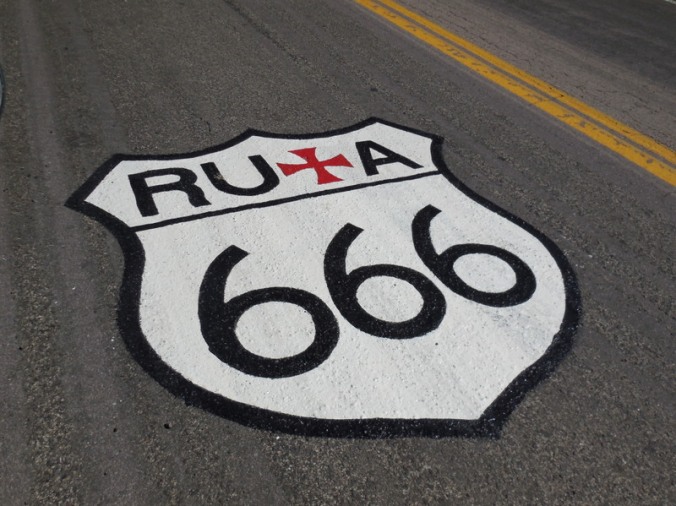 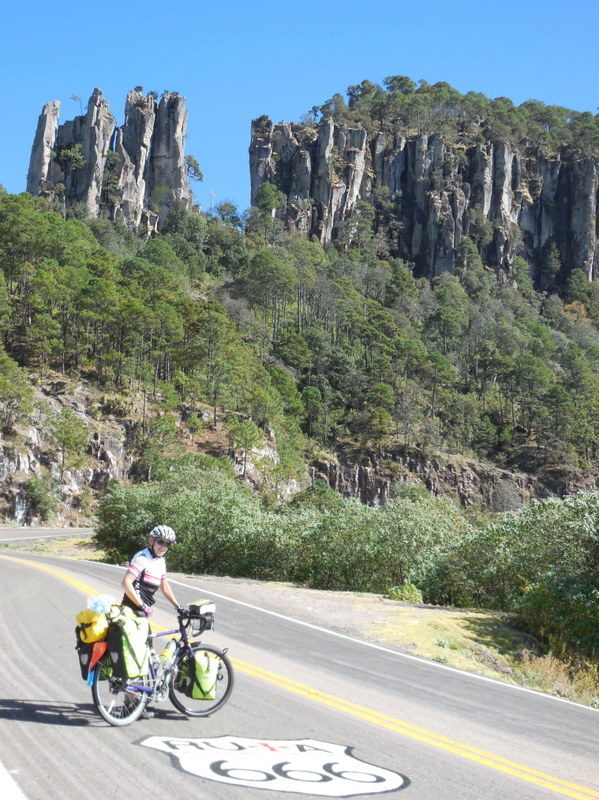 “Pipes” on the Backbone

The Backbone is only officially about 10 kilometres long.  It is billed as narrow, with lots of curves, but really, it was basically more of the same that we’d been riding all morning.  In fact, the whole day was narrow with heaps of sharp corners, with 1,000 metre drops to keep you on your toes.  We didn’t monitor it formally, but we could only recall about 6 cars passing us the entire day.  So we got to spend all of our time looking at the views and not our review mirrors. 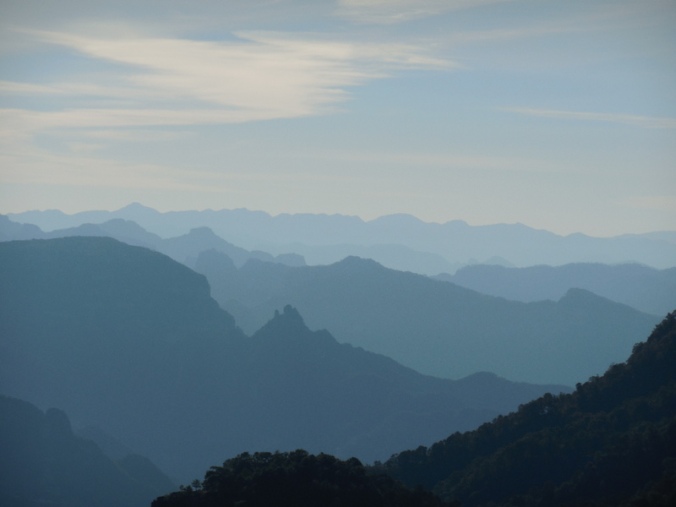 The Backbone is supposed to get a lot of rain, some winter ice and fog.  We had temps in the low to mid 20s, blue skies and road the entire day in summer cycling gear.  Not bad for the middle of winter.  The name Devil’s Backbone has a couple origins.  Local legend says that when the Archangel Michael threw the devil from heaven and he landed here on earth, his backbone formed the rugged ridgeline of the Sierra Madres.  The road has had a bad reputation for many reasons: it’s accident-prone and hundreds of people have died on it, these mountains have historically been remote and inaccessible enough that they are used for growing marijuana and poppies, and therefore, there has been a lot of crime related to drug trafficking.  We steered clear of all drug traffickers – we didn’t see any! 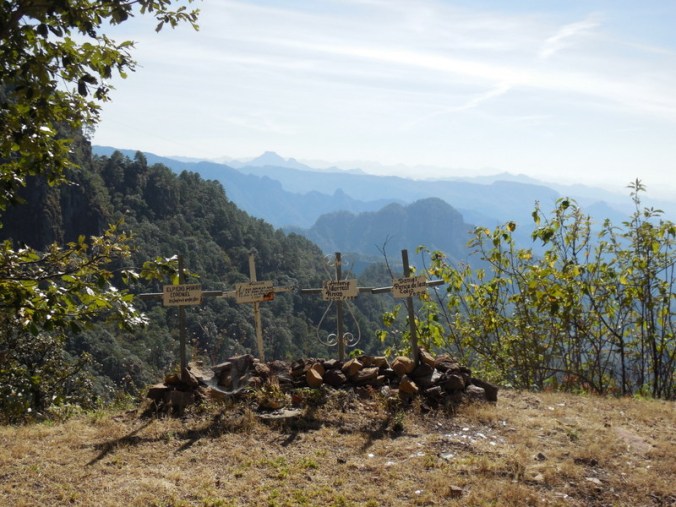 Eventually we hit the top and had about a 5k downhill into our destination for the day, La Ciudad.  We knew there was a hostal here and it looked like there were several sets of cabins for rent, as this place is near one of the national parks.  Before we got too stuck into finding a place to stay we stopped at a clean looking gordita stand and each had three bean and cheese gorditas.  Gorditas are basically like pita pockets, and the shop owner stuffs them with whatever you order.  It was nice and warm in the shop, which felt great as it was getting cool once we came down the hill and got off the bikes.

Nancy sent a message through Facebook with the hostel yesterday to confirm they were open and that they had rooms.  Since it was already almost 4:00 (the time zone changed at the border) and we couldn’t really see anything else we decided to ride up to the hostel to see what it looked like.  Nancy went in to look and we went ahead and took one of the rooms.  It seems relatively spendy compared to what we have paid in Mexico (600 pesos) but the rooms are very clean (barefeet walkable), as well as the bathroom – it feels like luxury after last night.  The only downside is that our room is on the second floor so we had to schlep all of the bags up.  The owner has said we can cook in their kitchen (at least we think that’s what she said) so we’ll head down pretty soon to cook up some pasta for dinner.

Home for the night – it is nicer than it looks

Tomorrow we have a relatively short day – about 47ks, with about 1500 feet of climbing, so hopefully it will be an easier day and we can get in earlier.  We have a long day into Durango on the following day, so getting some rest would be a bonus.

Bottom-line:  Serious adventurers should put the Devil’s Backbone on your bucket list – it is worth the hype and hard work getting to it.