Yesterday’s heat meant an early start today.  After brekkie in the room, we were on the road at 7:30 and rest of the other riders were not too far behind us.  While we didn’t love yesterday’s heat, the later risers in our little band of riders really got hit.  Lesson learned – everyone was keen to hit the trail early this morning.

Last night we had a nice visit with the Canadians (Myra, Kendra and Sonya – we have their names now), along with Nina and Martin.  Frederik is sending us notes for the day ahead (as he is a day ahead of us now).  It feels like we are not travelling alone at all – though we are riding mostly with just the two of us. 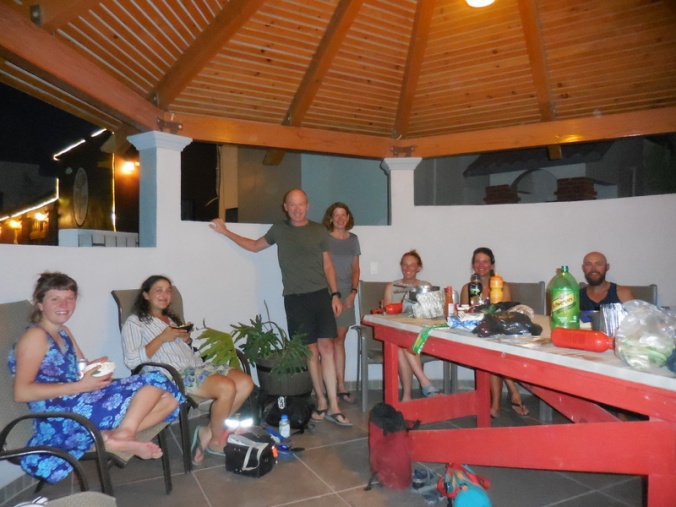 Being out so early we had a good look at the sunrise this morning.  Getting out early with the cooler air was great.  The only issue is that I wanted to snap a few too many photos.  The valleys and surrounding hills were all pretty green today.  It was night and day from yesterday’s dry scrub ride.  We had lots of cactus and yucca trees as we rode. 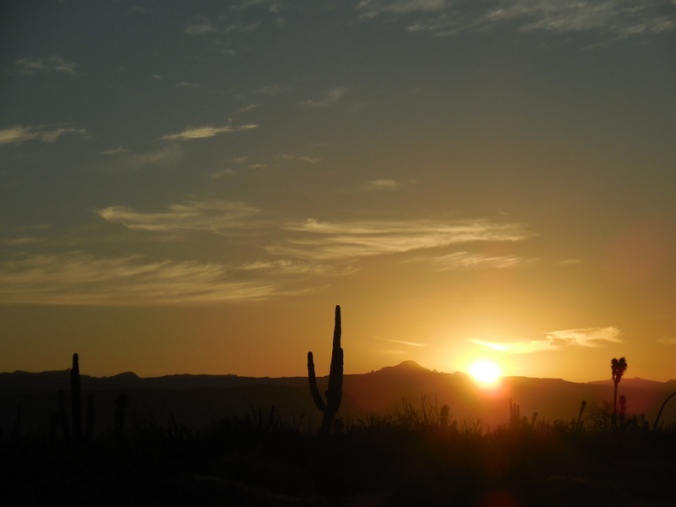 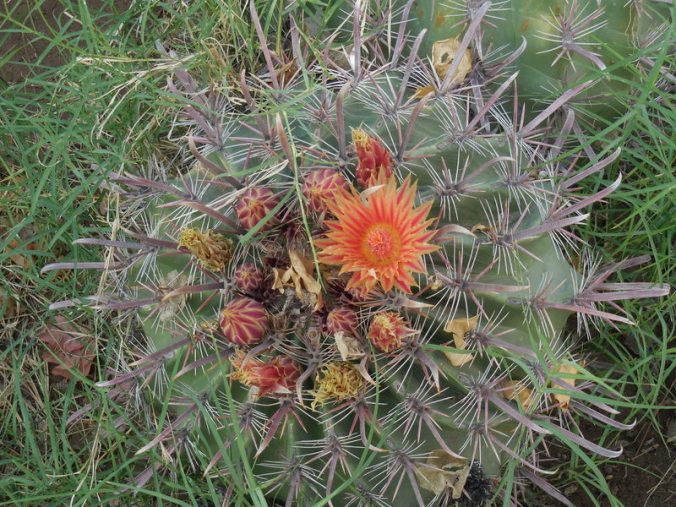 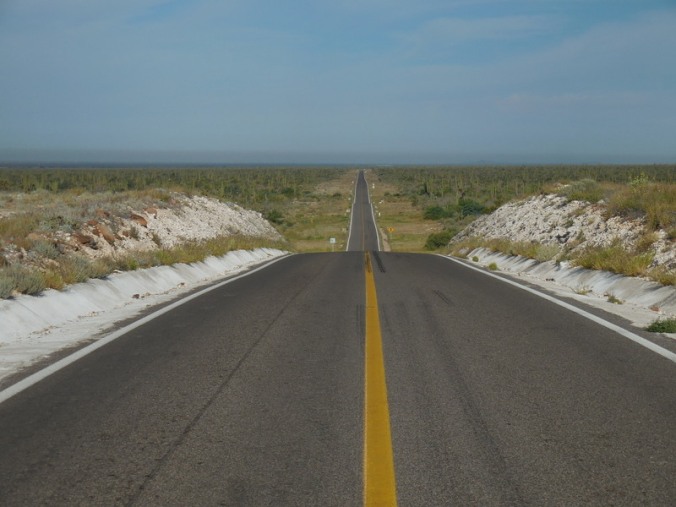 View of the road today

We stopped today and snapped a couple of photos of roadside shrines.  There are way too many of them out here.  We are pretty sure that each one represents someone dying in a road accident.  Some of them are very old – I saw one today that noted 1968.  It was very weathered so I’m pretty sure that that was an accident date, not the birth date.  It is hard to ride by these monuments and not pause for thought.  I’m sure that accidents happen in Australia and in the USA but those countries don’t normally build roadside monuments.  The monuments drive home the need to ride with caution and care – which we do.

Morning tea, and our only stop, was taken at a small cafe at a road junction.  The building was the only one around and it was very worn down.  We didn’t think that they were open but they were.  They only had cold coke and cold beer – no cold water or other soda choices.  We split a coke, because it was cold and ate our PB&J sandwiches.  There was a super cute puppy at the stop, along with a cat.  The dog was still too young to chase cars but you do worry about her as she gets older.  Not much else out there to chase. 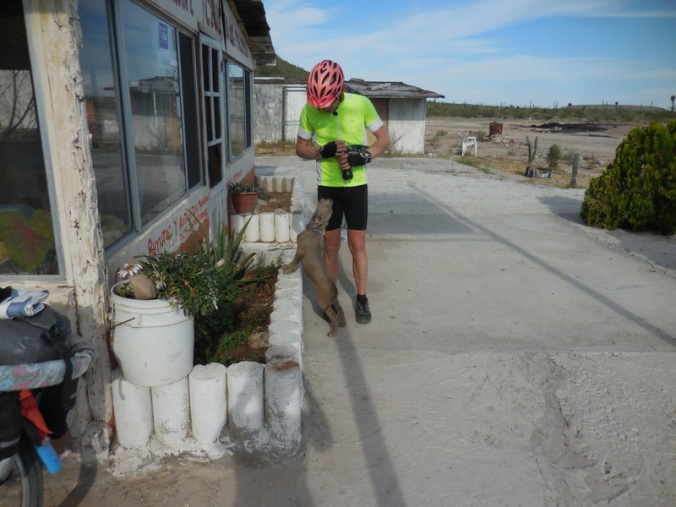 We rolled into San Ignacio at 11:30 – a trip record for arrival times.  The town center is 2 miles off the highway and the main square is quite nice, not fancy but relaxing. We found a place to have lunch where we had some nice fish tacos.  I really liked their menu and translations to English.  My Spanish is bad, so teasing anyone about English is a bit rich on my part, but the translation of Breakfast struck a funny bone for me. 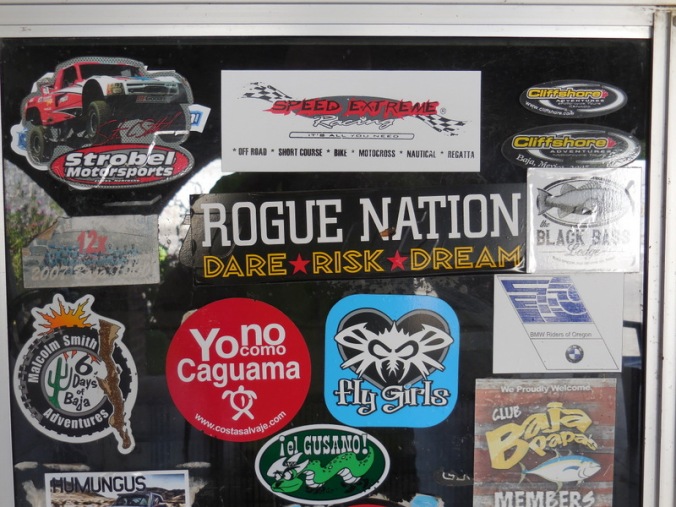 Our friends from Rogue Nation have passed by here!

We eventually moved onto a hotel just off the square.  The temperature was right about 100 and it was still not the hottest point of the day – heat rule invoked.  We are staying at the La Huerta Hotel, which is very nice.  It costs a little less than last night for some reason.

After showers we headed back to the square to have a better look around the mission and the cave painting museum.  The museum was nice, even though the signage was all in Spanish.  We took some photos for later study.  The mission was interesting.  We didn’t think that it was still in use but there some women were in a side room saying prayers, almost chanting.  It made for a nice atmosphere.  Of course we stopped for an ice cream in the square and watched the kids run around.  It seemed too hot to run around but kids are kids everywhere. 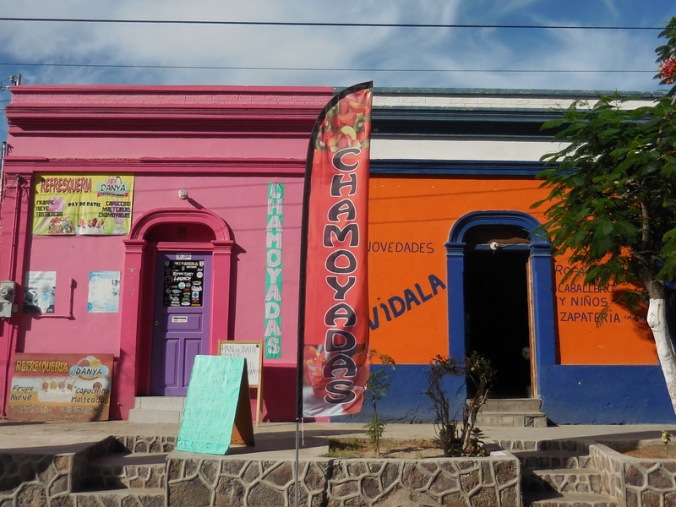 When we got back to the room we received a message that Kendra took a spill today.  She’s ok but currently on her way over to the hotel for me to look at her bike.  She is concerned that she may have to get on a bus tomorrow to get somewhere with a bike shop for help.  I think she’s bent her derailleur hanger – not an easy repair but I’ll do what I can.

Tomorrow we head for the Sea of Cortez, or Gulf of California if you prefer.  We are planning on riding to Santa Rosalia.  Frederik has already sent us the hotel report and in fact he and Seb may take another day off there.  Yes, we could see Frederik again!

There is a great grocery store right at the hotel so we picked up some supplies for dinner.  We are having avocado sandwiches and are being bold and chopping some tomatoes in with them.  We may have mentioned this before but we found some disinfectant that people recommend to use with local fruits and veggies before eating so we have soaked the vegetables as per the instructions.  They even had Orowheat multi-grain bread, so it should be a healthy dinner.  And, we’ll have bread left over to use for PB&J sandwiches for the road tomorrow.