We had planned another 75 mile day to complete the “desert crossing” – (we had heard that the 230 miles from El Rosario to Guerrero Negro were called this).  But our day was cut short when Nancy woke today with a little tummy bug.  We’re not sure what caused it but the doggy food at lunch yesterday is a top candidate.  She was the only one who didn’t have the burritos.  Luckily, we had good map details of all the various hotel options on this section – there are very few – but we knew we only had to ride 40k to reach the first hotel option where we could bail out.

Staying put where we spent last night probably would have made more sense but it wasn’t really an option.  The police workout court would have been absolutely sweltering this afternoon and no one really slept that well last night.  So another night there was out of the question.  This morning, Frederik, Seb, Nancy and I all commented about not really getting any sleep.  I’m not sure if it was the barking dogs, coyotes, truck noise or simply the large overhead lights that came on at dusk and only went off at dawn.  I’m pretty sure that near zero sleep didn’t help Nancy’s tummy either, so a change of plans was called this morning and we are now resting in the sketchy but cool Cactus Hotel in El Nuevo Rosarito.

Frederik and Seb were kind enough to stop and have a second brekkie in El Nuevo Rosarito – giving Nancy a chance to see about continuing – before they decided that they had to move on if they were going to make it to Guerrero Negro tonight.  It was a fairly long day to get there in the first place, plus they will cross the Baja/South Baja state line and lose an hour this afternoon.  Thanks for the company guys, I’m sure that our paths will cross again – they keep doing so.

Mesa seen along the way 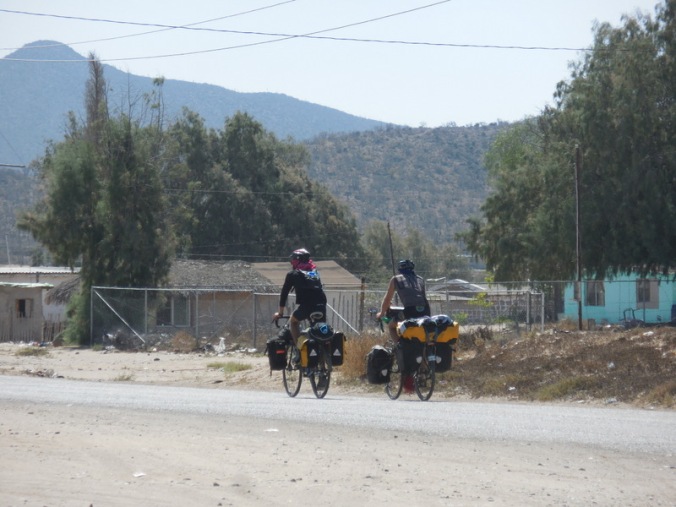 When not getting Nancy a new cold compress, soda water and/or Tums, I’ve been learning more about cactus…  First up, the post I did the other day entitled Saguaro, with lots of cactus photos, well, I got it all wrong.  There are no Saguaro cacti in Baja.  Instead, the giant cactus that grow here are called Elephant Cactus, or in Spanish, Cardon.  We are supposed to see Elephant cactus for the rest of the way down Baja, but no Saguaro.  Today however as we rode lower back towards the beach, the Elephant cactus became less common.

We saw a lot more Yucca trees today, along with another really cool looking tree called the Elephant tree.  The later is actually not that big, but the trunk and branches look too big for the tree, thus the name, I guess.  The Elephant tree is classified as deciduous but it loses and grows new leaves with cycles of rain, any time of year – unlike most deciduous trees that we know which lose their leaves seasonally.  I managed to get out behind our hotel for a few photos today – currently we must be in a dry period as there are no leaves.  Just back near Catavina though, we saw lots of them with leaves on them. 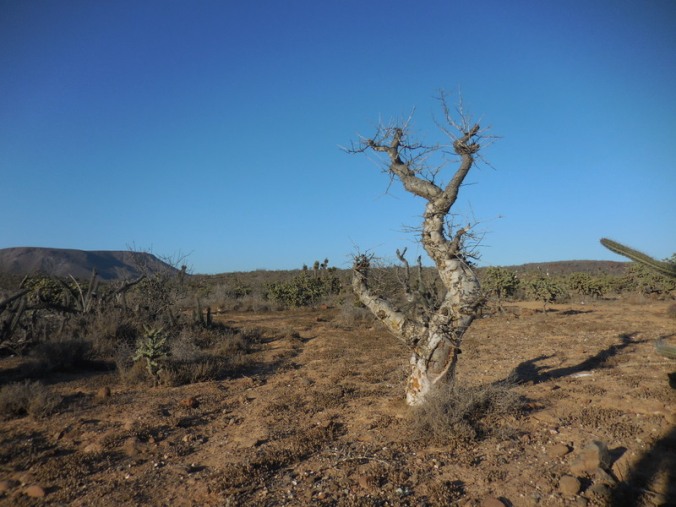 Close up of the above tree

We are also starting to see more Agave plants.  We are here at the start of their flowering season and started to see buds on some plants today.  It is pretty amazing how such a massive stock and flower grow out of such a small plant.  Agave is still used in cooking here in the region and in making of Tequila in other regions where the blue agave is more common.

Tomorrow, assuming that Nancy feels better, we are going to ride the last bit of desert to Guerrero Negro.  I don’t think that the desert actually ends there but…  GN is a bigger town where we’ll try getting a proper day off or two.  We heard that they have a Laundromat and at least a half dozen hotels.  If we are not 100%, we’ll stay here and make the most of Rosarito.  There is one store, one restaurant, we have WiFi (some of the time) and plenty of water.  We don’t plan on calling in at the local real-estate agent to inquire about the price of property, but we’ve been laid up in worse places.

Home for the night – it is not as nice as this photo makes it look!