We had a big milestone today – we crossed into Mexico!  It feels like a big step, as so far on this trip we have been in countries where we spoke the same language and where things were fairly similar to where we come from.  Well, that all certainly changed today and we will be the ‘foreigners’ from now until we reach the bottom of South America.

Barb, our lovely host in Jamul, gave us a warm send-off this morning, making us scrambled eggs for breakfast and giving us a final pep talk as we got ready to go.  It was such a nice stay at her (and Steve’s) house the last couple of nights.  Having the chance to talk to someone who has been in Mexico many, many times over the last 30+ years and who really enjoys the country was really reassuring.  Thanks so much Barb for your hospitality and spending some time with us – it was just what we needed! 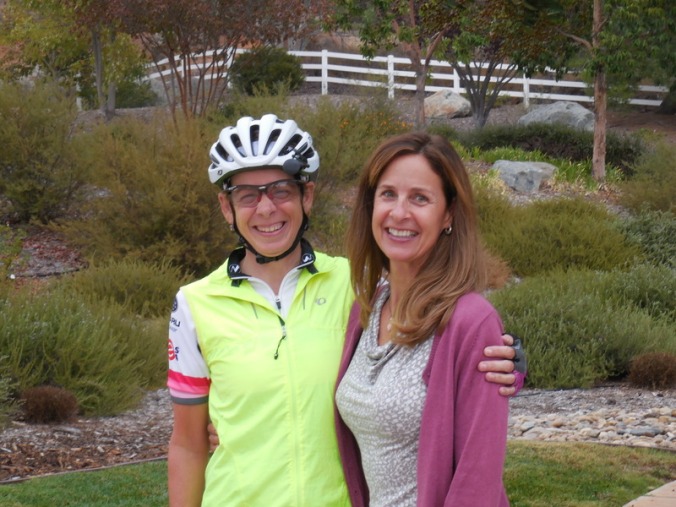 We left Barb’s house about 7:30 this morning, and had about a 20 mile ride to reach the border.  Based on advice from Steve we stopped to get some Mexican pesos on the US side of the border and then rolled up to the border gates.  There was a bit of confusion as to where we were supposed to go – in the vehicle line or the pedestrian line, but we were eventually directed to push our bikes through the pedestrian entry.  We made a slight mistake in going all the way through without getting the Mexican tourist visa that gives us 180 days, so we had to loop back through and go into the immigration office (which we walked right by the first time – it’s not really marked well).  We filled out the forms, went out to the bank next door and paid the fee (500 pesos or US$28 each – they take US dollars for this), then went back into the immigration office and completed the process.  Finally we made our way back out to our bikes and then we were really in Mexico! 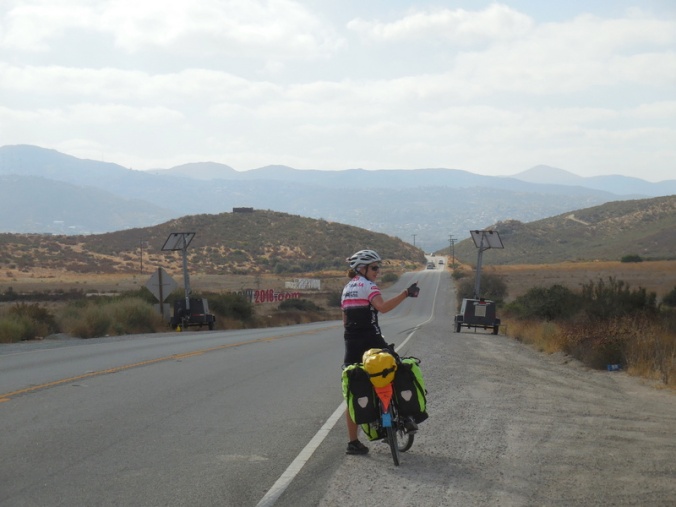 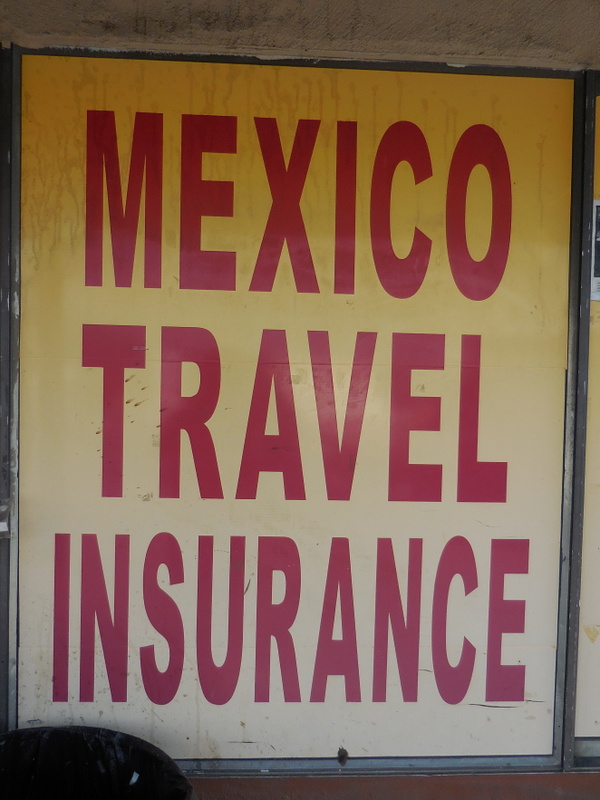 Thanks but we already have some 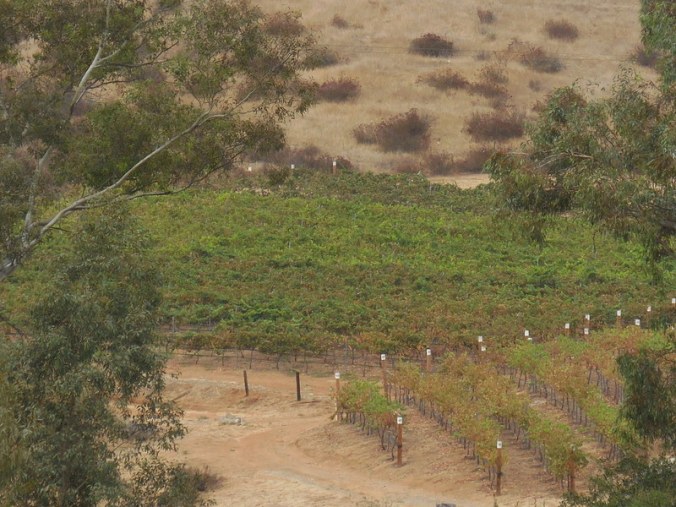 Wine growing north of the border 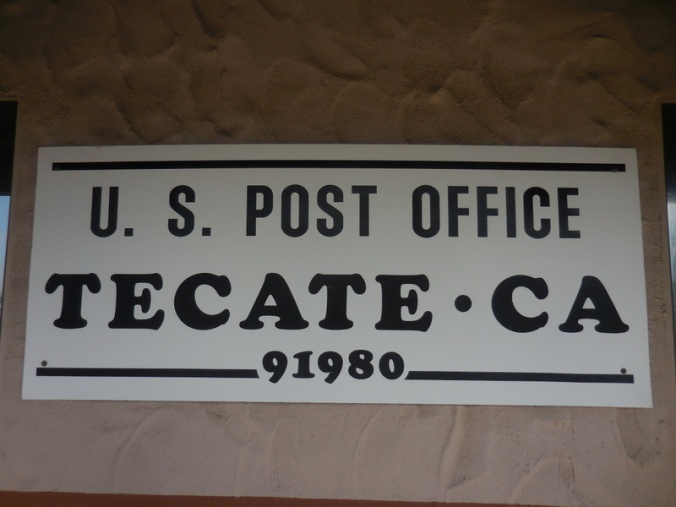 Tecate is the end of the Cascades-Sierra Bicycle route – woohoo 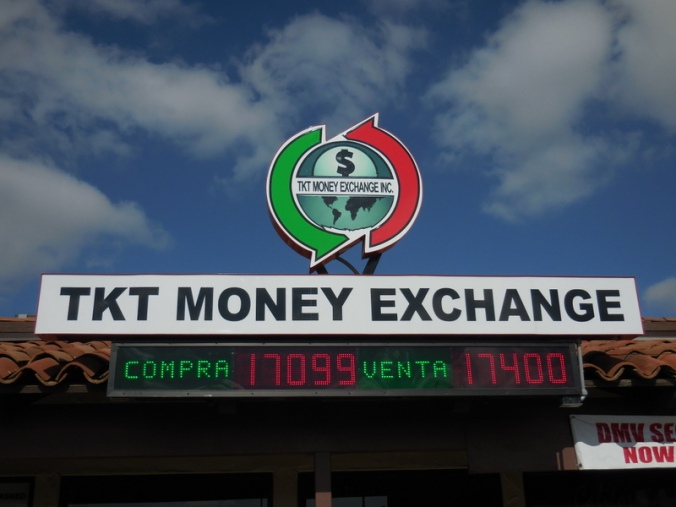 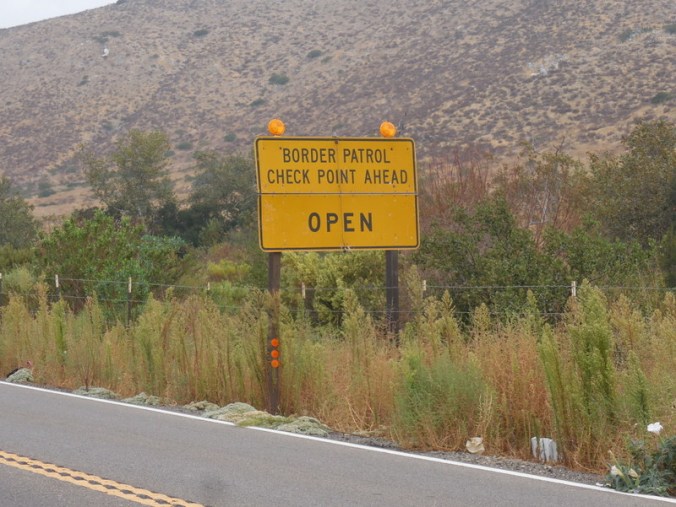 North of the border check point – for cars coming in 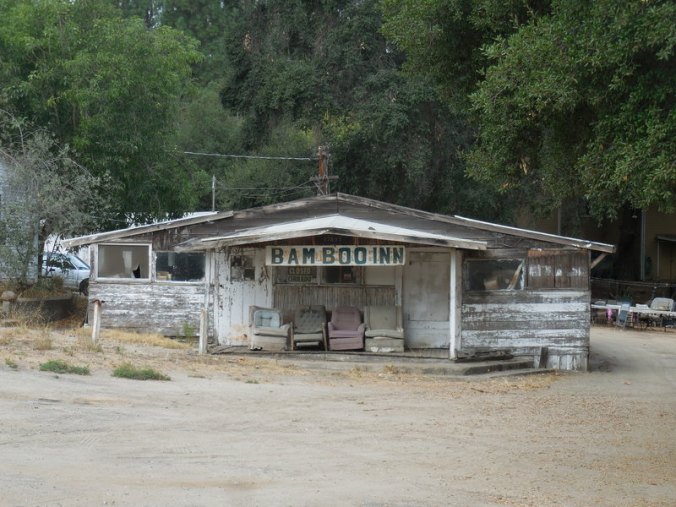 We headed straight down the main street to where we could see a little square to figure out a plan for the day.  It was only about 11:30 by then, too early to try to check into a hotel so we did the next logical thing – went to a coffee shop right on the corner (Casa Paris) and had a nice coffee.  Our Verizon phone was still picking up signal so we mapped out where a couple of hotels were, as well as a big Telcel office (a major Mexican phone carrier) and a hardware store.  We spent the next hour and a half successfully ticking off all those things on our list.

We first made our way to a hardware store (a ‘ferretería’, in Spanish) to look for a new immersion heater.  The little one we have is not really powerful enough to boil water (at least, without taking 30+ minutes to do it) so based on some other cycling blogs we knew that Mexican hardware stores carried larger ones (‘calentador de immersión’).  This will be handy to allow us to heat water for coffee and oatmeal in the morning and tea at night, without having to start up the stove all of the time. 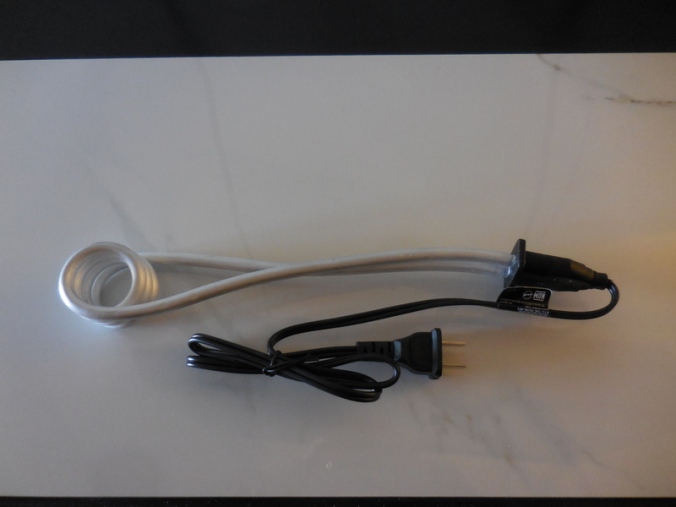 From the hardware store we made our way to the Telcel store to try to get a Mexican sim.  Our initial efforts with the folks who were greeting people at the door were quite funny.  Trying to figure out phone plans in your own language is complicated – now try to figure it out in a language you do not understand!  Thankfully the Telcel store had a lovely guy named Diego who spoke great English and helped us get a prepaid sim that should work for us.  Thankfully we have our older Motorola phone (which is GSM technology), as the Verizon phone (which is CDMA technology) will not work in Mexico.  Anyway, Diego walked us through everything, told us how to recharge the phone, etc. so I think we are good to go.  I suspect we will run into areas where there is little to no mobile coverage (a bit like parts of Alaska and Canada), so blogs may be delayed a bit as we work our way down Baja. 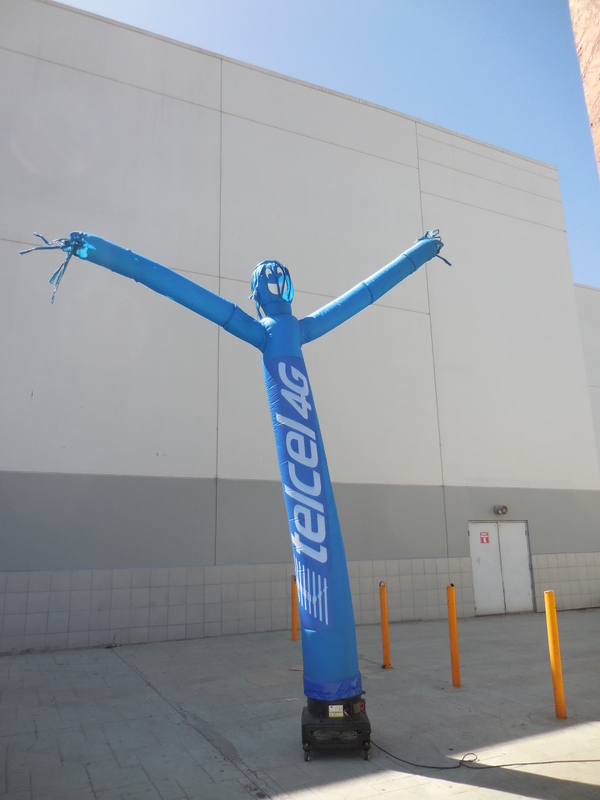 Not Diego – but we are happy

The next chore was to get some pesos from a bank, and luckily enough there was a bank in the same mall area where the Telcel office was located, so I took a deep breath and used the ATM there.  Success – it did give me pesos and it didn’t eat my card!

So it was finally time to find a hotel.  One of the ones we had seen on the map was not too far from where we were at, so we rode up to the El Dorado Hotel to check it out.  They had a vacancy, it didn’t look too bad, it wasn’t as cheap as some of the others right near the border but it wasn’t ridiculous and we could get in the room right then.  So, we took it.  The only downside was that the room is on the second floor, so there was a bit of work to lug the bags and bikes up a set of stairs.  The room isn’t a place you’d want to spend too many days but we have certainly stayed in worse.

We cleaned up, Dave had a nap (not sure why, I was the one that kept getting woken up last night by his snoring!) and then we went out for a walk, making our way to the El Major Pan de Tecate – the best bread in Tecate.  This is a fairly famous bakery in Tecate, with shelves full of all kinds of baked goods, from bread, to muffins, empanadas, cookies, biscuits, donuts – anything you could think of.  Of course we couldn’t really tell what was in anything, so we stood in the aisle using Google translate on our phone to figure out what all these delicious looking things were!  No surprise that we ended up buying too much, so we are going to have to figure out how to carry all of this stuff tomorrow – or at least what we don’t eat tonight! 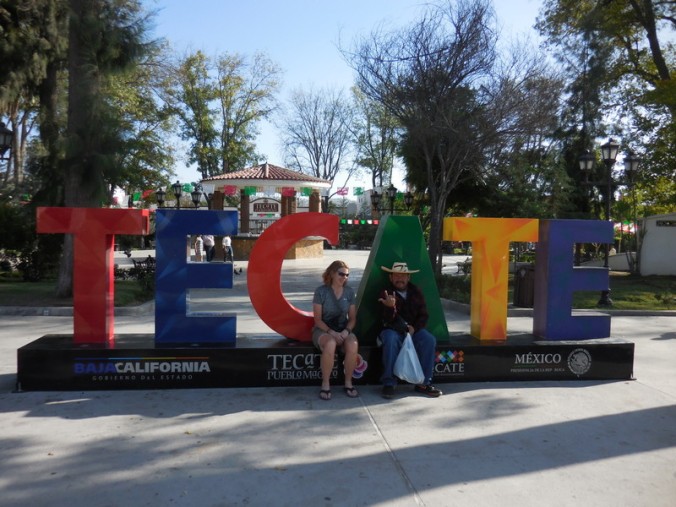 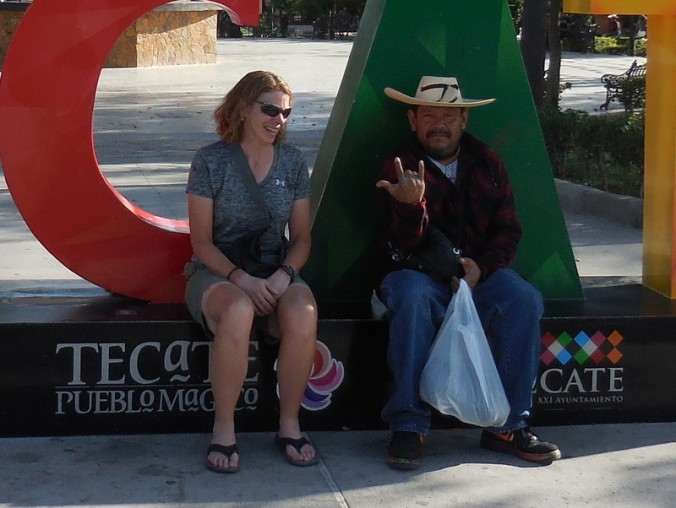 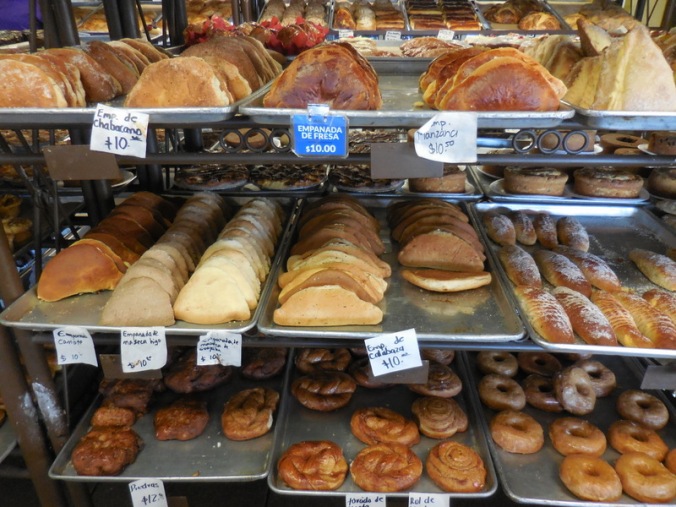 Too much choice at the bakery

Final stop on the way back was at Tacos el Guero, a taco stand just down the street from the hotel that was recommended by the hotel clerk.  It was kind of an open-air taco stand, with tables and lots of people.  It wasn’t entirely clear what the process for ordering was (well, it probably was to everyone but us!) but a nice man who was making little tacos from a pork spit (tacos adobada) spoke English and helped us.  They were very tasty – pretty spice, but very tasty.  Thanks to Barb (again!) for telling us about this kind of taco – I am sure we will be having them again. 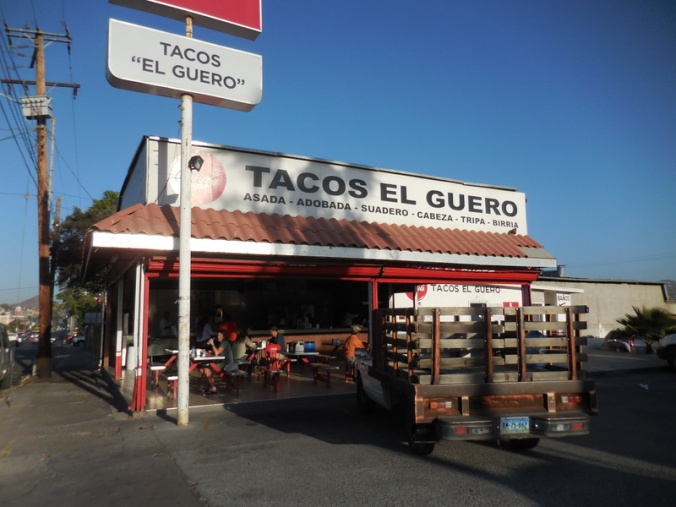 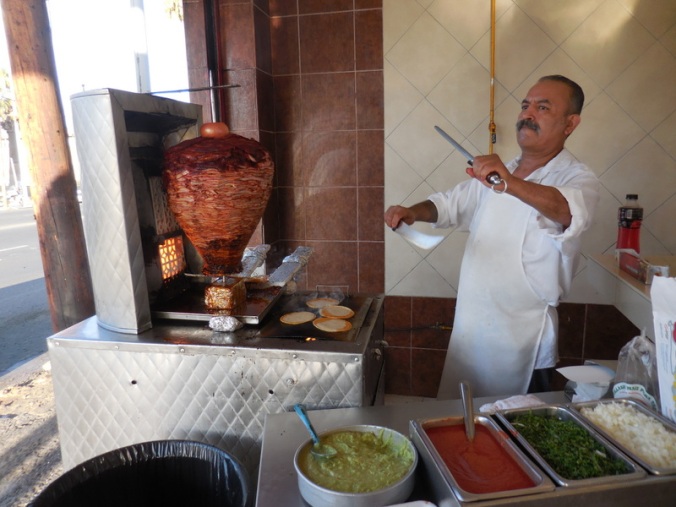 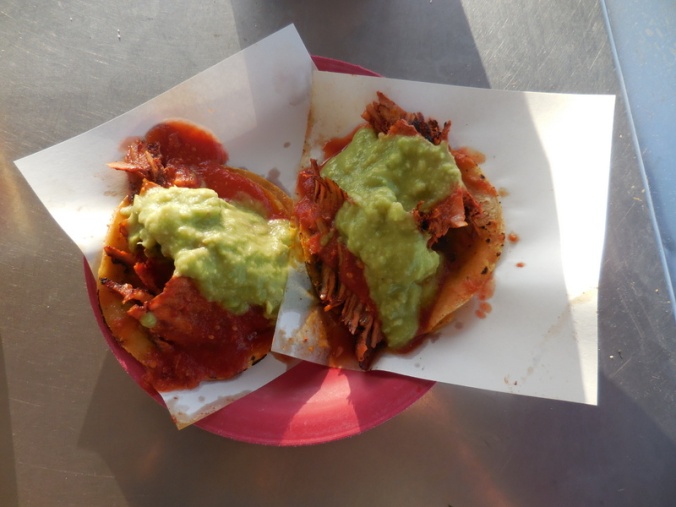 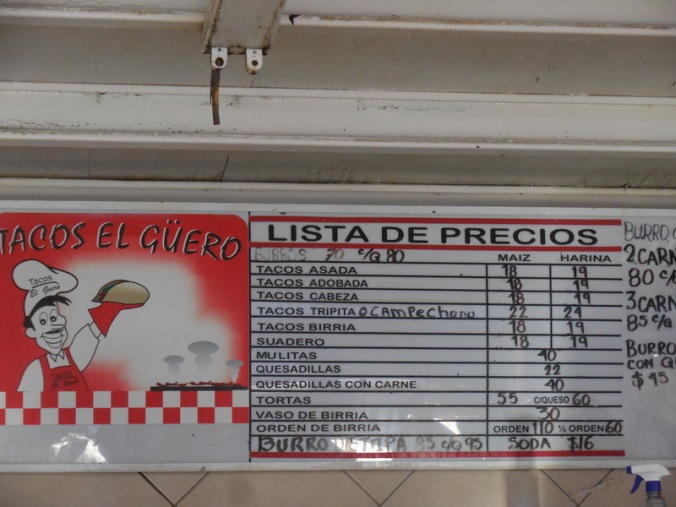 We are now back in our room, practicing Spanish by watching some kind of Survivor show – neither of us have any idea what is going on, though we do recognise a word or two.  Dave has made tea with our new immersion heater, and we have some nice cookies from the bakery to eat.  So, all in all it has been a pretty successful first day in Mexico. 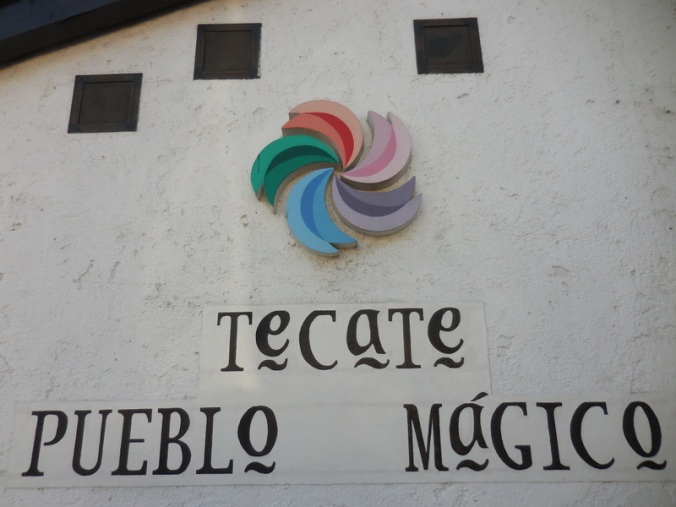 Tomorrow we head toward the small town of Guadalupe, around 40 miles south of here on Hwy 3.  Guadalupe is part of a wine region, but there isn’t much there in terms of hotels (other than some very expensive ones).  There is supposed to be a campground nearby so I think that’s where we will aim for.  Hopefully it will be open and operational when we get there.  If not, we may have to do a wild camp somewhere down the road….