We had a great day today, starting with a lovely breakfast made by our awesome Warmshowers hosts Gary and Lee.  We sat and talked with them over coffee for quite some time – this was one of those places that really rejuvenates the soul and it was hard to tear ourselves away.  Gary gave us a good map of San Diego bike routes and lots of information on things to look for along the way to San Diego.  We finally said goodbye about 9:45 – perhaps we’ll see Gary and Less on their cruise through NZ and Australia in Feb 2019.

We had a pretty short day today, but there were many things to see.  And, most importantly, we ran into Alred, a Welsh fellow who is doing a ride similar to us.  We had heard of him from one of our Warmshowers’ hosts (Hank), and today as we rode through one of the many beach towns and stopped at a red light, we noticed a fellow tourer on the sidewalk.  As we started to ride off, he said “Are you the Petersons?”.  Well, I guess that’s kind of who we are…  Anyway, we regrouped on the sidewalk to have a proper conversation, catching up on plans going forward, what we had done, etc.  Alred is crossing the border tomorrow, so he will be a few days ahead of us as we are heading east a bit on Sunday and will cross at Tecate in a couple of days.  Hopefully we can keep in contact with him and get some info from him as he heads south ahead of us. 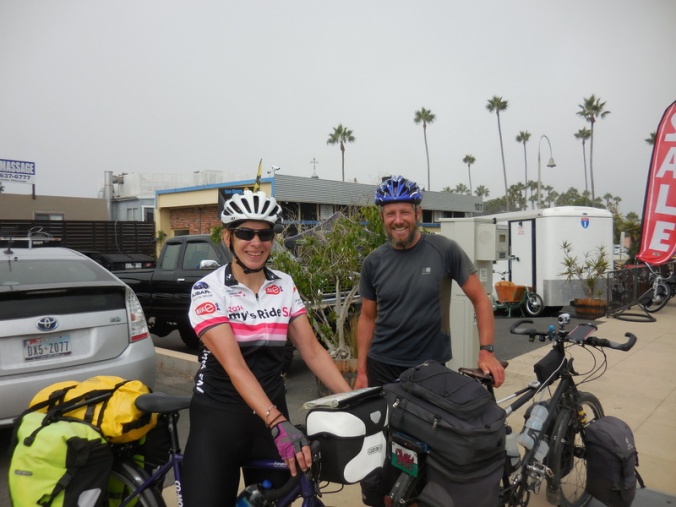 It was clear blue sky when we left Carlsbad this morning but it wasn’t too far out of town when we hit the fog rolling in.  We had foggy weather for quite some miles, finally riding out of it as we got closer to San Diego.

No Swami were spotted

Fogging up near Encinitas

One of the interesting sights today was the Cardiff Kook – or the Kook.  It is a 6 foot bronze sculpture of a young surfer, situated on the Coast Hwy at Cardiff by the Sea.  The hand positions and childish appearance have garnered a fair bit of “dress up” over the years by pranksters.  Kook has been dressed in various attire over the years.  The boy has become a wrestler, Zorro, a pumpkin head, Santa Clause, Uncle Sam, a prisoner from Abu Ghraib prison – and attacked by a shark and pterodactyl.  Kook has had so many different looks that the park service no longer rushes to take off the costume of the day, as a new one is only waiting in the wings to take over.  He only had a few balloons and bits today – perhaps the Halloween costume is being saved for later in October.

We went by the famous Torrey Pines Golf Course (famous, if you are into that kind of thing).  Thanks to Gary’s advice we got off the highway and took an inland road in the state park that is there.  There is a nice (steep) hill, but very few cars are on the inside road as it just goes from a lower car park to an upper car park in the park.  There were lots of folks walking up the hill though – it clearly is a route for the locals to get some exercise.

We wound our way through several beach communities, getting close to the ocean and the fancy houses that line the cliffsides.  La Jolla seemed to be the fanciest, with several high end jewellery shops in the village area.  Of course we didn’t stop at any of those – just a quick stop at Starbucks for a bite to eat and some cold drinks.  We did feel decidedly underdressed for the area though.

Dave went to highshool with Bill Scripps – Grandson of “the” Scripps

Then we had the big push into San Diego proper, working our way through some Friday afternoon traffic to get to the ferry terminal to catch a ferry to Coronado Island to our home for the next two nights – we just made the 3pm ferry.  We could see lots of black smoke in the harbour and as the ferry made its way out to the harbour the source of the smoke became clear.  An older boat near the harbour wall was fully engaged in flames, spewing black smoke.  A fire boat was nearby, spraying it but it didn’t seem to be attracting too much information.  According to news reports, fire gutted much of the interior of a 130-foot fishing and research boat docked north in the harbour called the Norton Sound. They finally have the fire mostly out tonight but it took all day and made quite the scene in the harbour.

Fire on the harbour

It was only a 15 minute ferry ride to Coronado Island, where we are lucky to have a place to stay with a friend of Dave’s mom – thanks Joyce, Susie and family.  Actually, Dave went to high school with Joyce’s son Jay (Susie’s husband), but he is unfortunately away at a softball tournament this weekend so we won’t see him.  Joyce cooked us up a great dinner and we are now ready for sleep (at least I am).  Tomorrow Joyce and Susie are taking us to see some sites around the area – we are really lucking out with great places to stay these days!