We had a nice quiet night in the hiker/biker site at Mugu Beach Campground.  We had heard that some of these sites are overrun by “homeless people on bikes”.  Technically, we are homeless people on bikes so our concerns here are a bit of the pot calling the kettle black.  Good news for us all the same, only one other rider (besides us and Frederik) showed up.  The other guy sort of kept to himself but we were able to learn that he had travelled from Portland and was ultimately heading to Columbia – via Colorado.  We may get the chance to connect with him down the road.

As for Frederik, we rode with him for about half of today.  I’m pretty sure that we won’t see him again as his last day of riding was today.  He is spending some time in LA and Seattle, before flying back to Italy on October.6.  He could learn in the next few weeks if Australia will grant his request to immigrate – so who knows, we may see him again in Oz one day.  It was nice getting to know him and travel with him for a couple weeks.  If anyone in Australian immigration needs someone to vouch for him, we’d certainly be willing 🙂 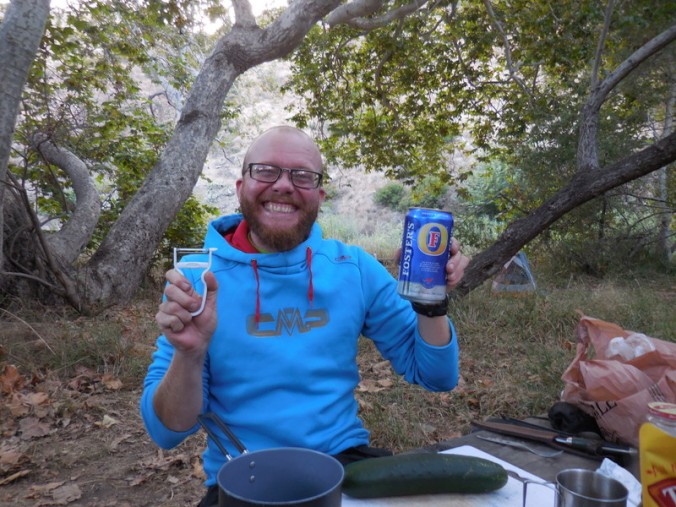 As for today’s ride…  It was mostly flat, except a few bumps around Malibu.  We started by finishing up the Mugu Point area, then riding into Malibu.  There were quite a few weekend bike riders out for a Sunday morning spin.  I resisted the temptation drag race all but one guy where a steep hill proved too much – nothing like giving the “carbon bike boys (and girls)” a run for their money.  The cool part about my little drag race was reaching the top with time to get out the camera and capture Nancy and Frederik as a 40 person peloton rode past.  Good work hopping on the back guys 🙂 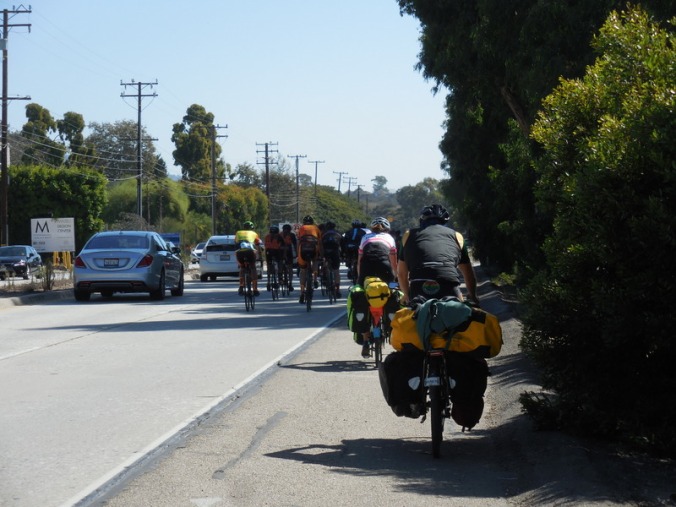 Nancy jumping on the back of the paceline 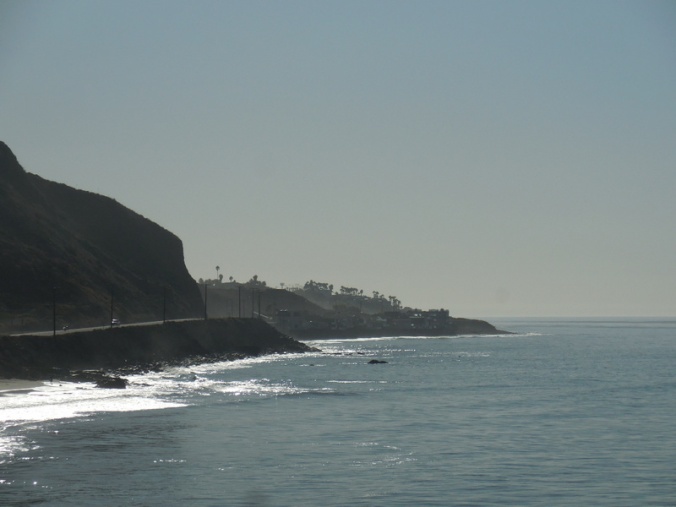 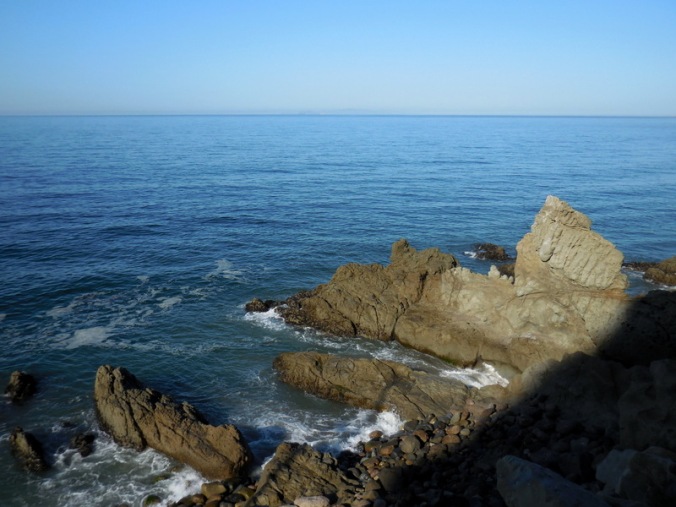 Traffic was not too bad early, expect for when the nice wide shoulder was blocked by parked cars.  We had to ride in the traffic lane for a few short spells.  Eventually the road became two lanes and traffic increased.  We could mostly count on the inside lane being safe except a few drivers didn’t feel the need to move left as they passed.  It made for a nervy ride until we reached Will Rogers Beach where we picked up the beachside bike path.  We rode this path the rest of the way here and had no further car issues. 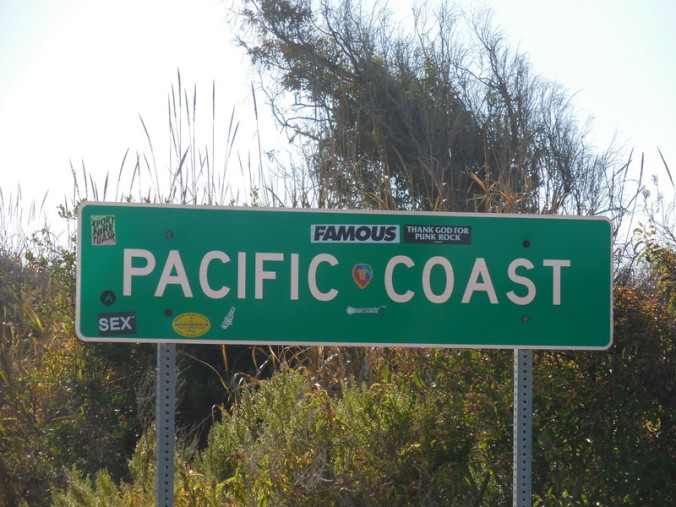 Very helpful sign, just in case we forget where we are at 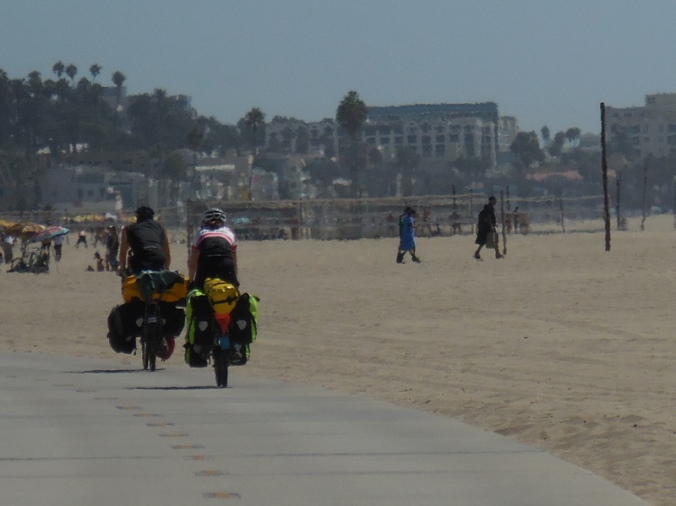 Frederik and Nancy riding the sand 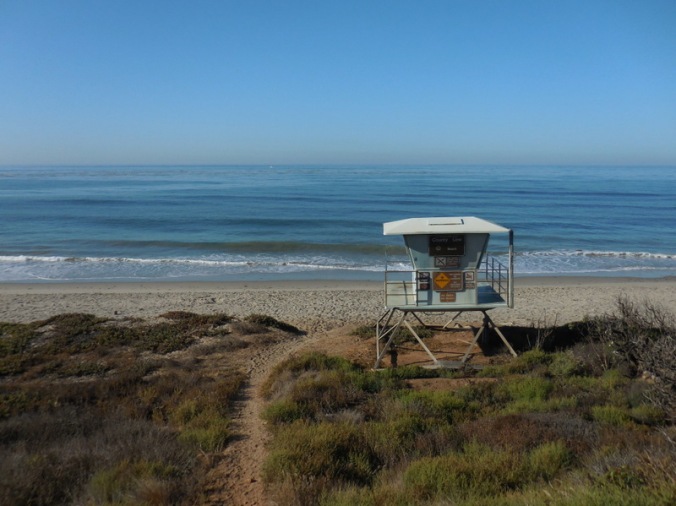 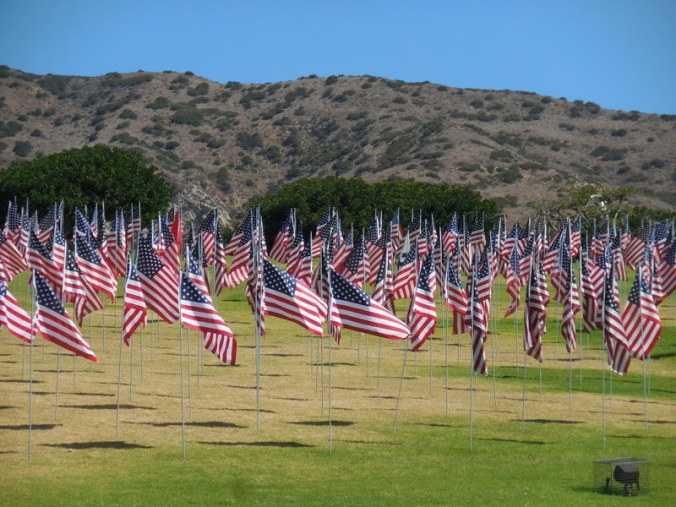 We stopped for a final goodbye with Frederik at the Santa Monica Pier.  Boy, what a crazy place it was.  Around here and at nearby Venice Beach, for the first time in long time, we felt that we didn’t really stand out that much.  There are so many people trying to “make a statement” of some kind, three people in bright lycra simply blended into the background noise. 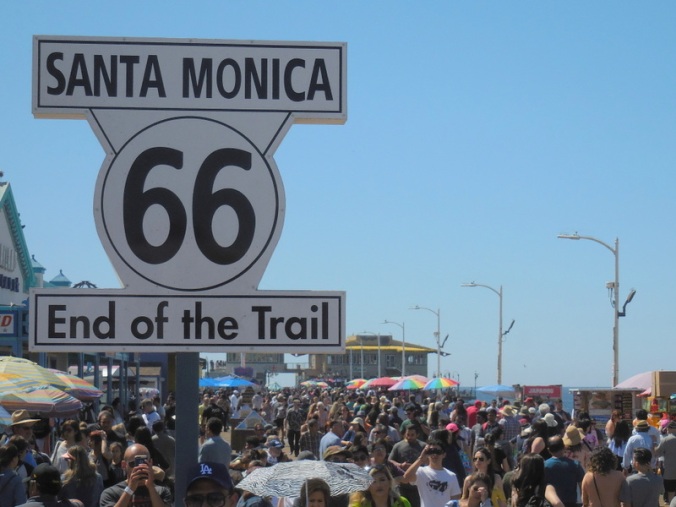 Pier and the official end of Route 66 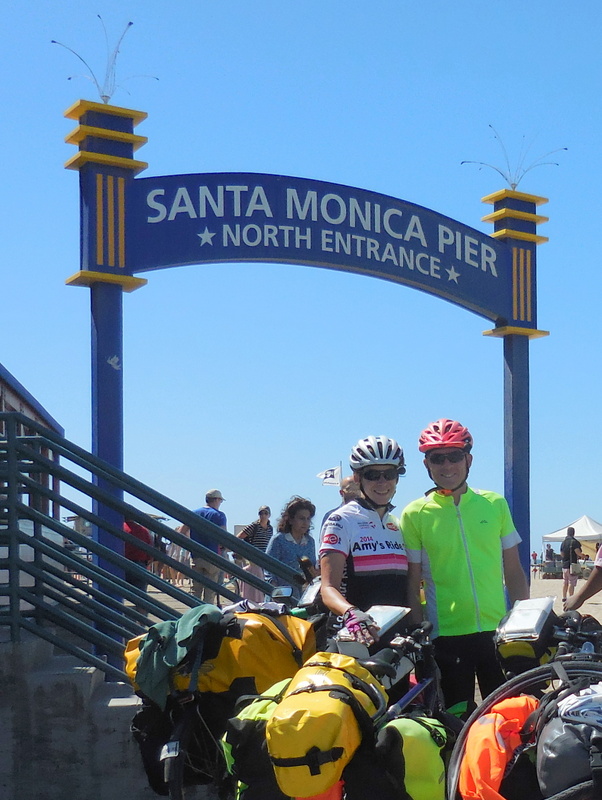 The two of us made it to Manhattan Pier and I got a little messed up on my LA beach piers.  We rode 1.5 miles past our B&B only to have to stop a local to ask where the best cafe was, and to give us a chance to regroup.  We had a great second brekkie at around 3PM and got sorted on the route to our B&B.  The ride back was easy, except for the climb up away from the beach – it was quite steep. 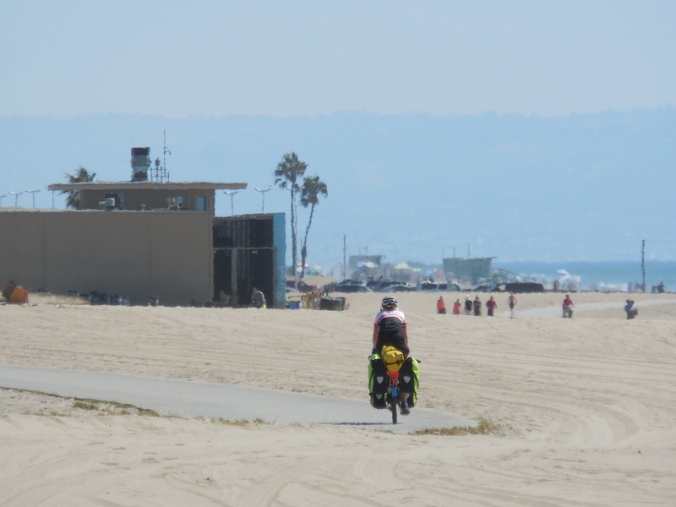 Nancy now on her own, riding the sands 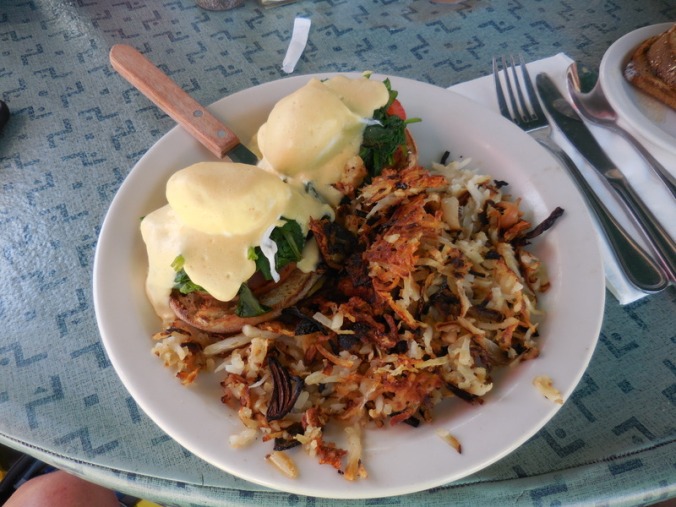 Hermosa Eggs – on Hermosa Beach – when in LA…

We’ve settled into the B&B, gone shopping and had dinner.  The B&B is mostly what was billed at on the web.  It’s not fancy, but the location is great and we are happy to have a few days off here.  We’ve ridden 7 days in a row to reach Manhattan Beach and have also just finished out first 4 months on the road.  We are pretty much on schedule, whatever our schedule is.  We’ll see if we can’t maybe do a 4 month summary post and perhaps share a bit of the LA beach scene in the next couple days.  We also have to figure out how we are going to enter Mexico and a rough plan for how we’ll cover Baja.