We are really liking our new “along the ocean” route and we only just reached the beach late this afternoon.  In fact today, we had a great day overall.  The roads were not all that great, some too bumpy, many too narrow and there was lots of Saturday traffic.  But where the roads lacked, the people we met (and re-met) today really made up for it.

The people experience started almost as soon as we left the hotel when we stopped to ask a local rider if the bike path along the river went where we wanted to go.  Meet Jack, a 76 year old cyclist riding a classic old 1990s aluminium frame.  Jack asked us about our trip, took a few photos then decided that rather than explain the route to us, he would simply turn around from where he came and just guide us.

Jack was only going to go a few blocks but at every junction for the next 40k he decided that he would take us “just a little further”.  We eventually stopped after about 40k at a Starbucks in Fillmore where Jack wouldn’t even let us buy our coffees.  Jack will be in Mexico about when we are and we’ve invited him to join us on the Devils Backbone – a famous mountain range we hope to ride.  Even if he doesn’t make it, we really enjoyed talking with Jack and hearing about all the exciting things he’s done in his life – such as living and sailing on a boat for 5 years, nearly around the world.

The only trouble riding with Jack was that he is bloody fast!  Sure, we are loaded and slow, but regardless, Jack is lickety-split fast, let alone for someone who is 76 years old!  I didn’t dare stop for photos for fear of losing him and Nancy at the next corner.  I’m pretty sure that was fastest we’ve ridden the first 40k of any day on this trip.

From Fillmore to Oxnard it was a bit of motorway riding on highway 126 and then some back road ridding through a nice little burg of Santa Paula.  We saw many more citrus trees, some avocado trees, lots of pepper plants and some pomegranate trees – we know where our fruit and veg comes from now.  We got off the highway at Santa Paul and found an amazingly active main street.  All the parking spots were used and all the shops were buzzing – no Walmart affect here and it was really nice to see. 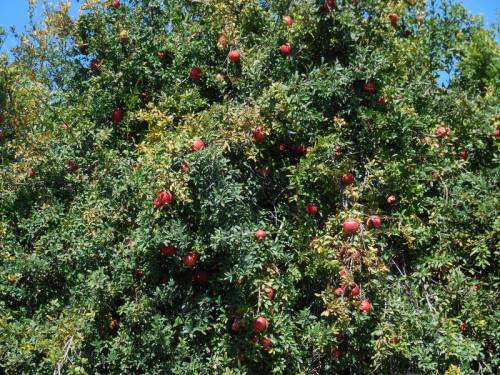 Peppers as far as you can see

We had some more narrow roads to Oxnard where I’d mapped out a route the Performance bike shop.  I was looking for new chains and brake pads.  I’m not sure that either is necessary yet but they both may be hard to find in Baja.  The bike shop manager gave us a couple $20 off coupons (even though the sale doesn’t start until tomorrow).  Then he gave us two cases of Honey/Stinger sport gels – these are the little gels you eat when out riding.  We don’t generally use them simply because we can never find them.  Both cases were past use by date (by a few weeks) – normally the shop guys use them for rides so they are perfectly good and will fuel us for a few weeks.  While we got photos, somehow we missed the manager’s name – whoops.  We had a little more city riding before we reached the bike route on the ocean but this wasn’t too bad because the shop manager gave us a better route to take.

Dave and more gu than a man should have

Once we reached the “official” route, it was pretty well signed.  We followed it along out to the coast and along the ocean at Mugu Point.  It was pretty cool to see the ocean again, having not seen it since up in Washington.  And yes, we had a tailwind now – life is good.

We’re on the coast route now 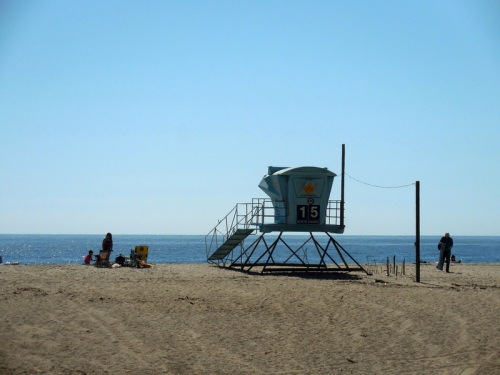 Somewhere along the way, we got an email from our old friend Frederik.  We exchanged a few notes and agreed to meet up at the Mugu campground hiker biker sites where we traded tales of each other’s last week.  We had not expected to see Frederik again and this was a really nice surprise.  We “unloaded” one of our Honey/Stinger cases on him in exchange for the photo below of him in the “stolen” Aussie board shorts.  Somehow I got the colour red from his first telling of the story but as you can clearly see, they are white, not red.  The one thing I definitely got right was the loud part of them.  If you were to steal these shorts, you’d have to think twice before wearing them the next day.  And yes, for those wondering, Frederik has written the thoughtful letters to both police and the kid who stole his bike.  Who knows, maybe one day the kid will benefit from Frederik’s thoughtfulness.

Tomorrow we are heading the Manhattan Beach and a few days off in a B&B.  It will be our 7th day in a row of riding so we are ready for some R&R.  We’ll be riding a lot of beach cycle path in the Santa Monica and Manhattan areas – should be interesting.  Before all of this of course, we’ll stop for one more goodbye and final coffee with Frederik in Malibu.