Today was easier than yesterday – it had to be.  We had some new challenges in the morning however, as it was raining on the tent.  We haven’t had a wet tent to deal with in forever.  Our tent is supposed to be able to be taken down from the inside but you have to set it up correctly.  Needless to say, last night we did not do this.  So a wet tent went into the bag.

We “only” had 50 miles to ride to reach Palmdale so we were pretty relaxed about getting going.  Truth be told, it was more down than up and it looked like strong tailwinds so we took several rain delay coffees at the nearby glider terminal cafe.  The rain meant no flying until it lifted so we milled around with several pilots waiting to see if they would get airborne today.  Eventually, around 10AM we bailed on more waiting and hit the road with sprinkles still flitting about.

Brekkie at the glider port

The first 10k was mostly uphill through the foothills and up into the Tehachapi wind farm.  The wind farm is interesting for many reasons.  It was the first large scale wind farm in the USA.  There are at least 4, maybe more, generations of turbines and towers.  Everything was spinning today, even the really old towers.  Given that the first turbines are not that old, it was fascinating to see the progress in technology.  Towers used to be made of steel strut construction and blades used to be pretty short.  Modern towers are single steel columns and blades are 4 to 5 times as long as the original.  The folks at the airpark were not happy with the towers in general because they said that most of the power is shipped off to Los Angeles.  Me, I liked the visual that they created and no matter where the power is going, it means less fossil fuel is being burnt. 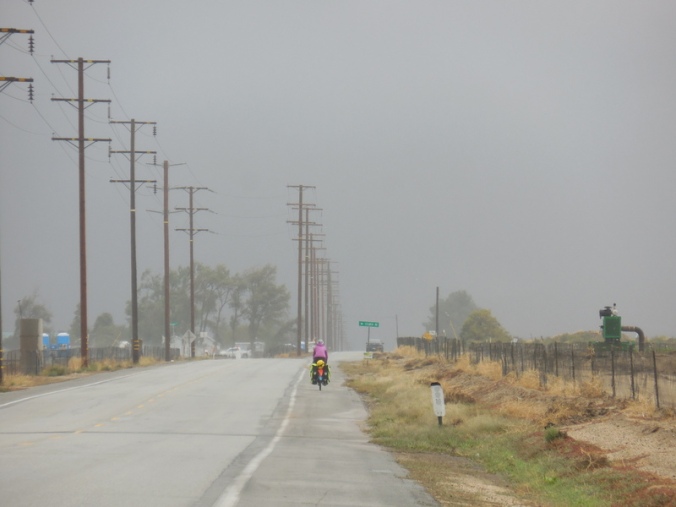 Nancy riding into the abyss 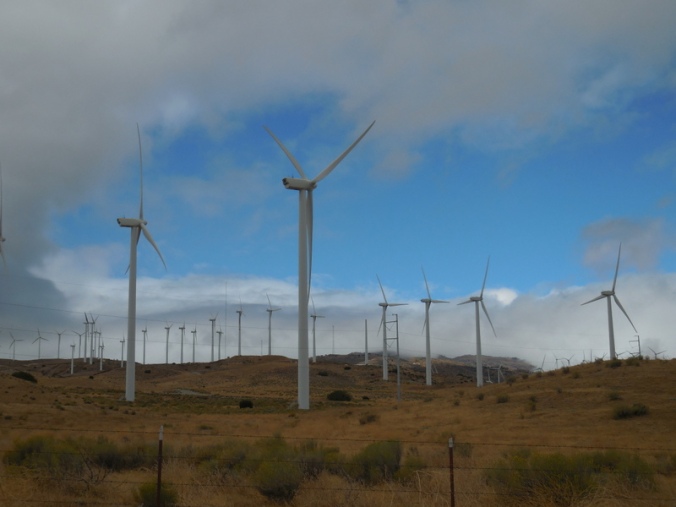 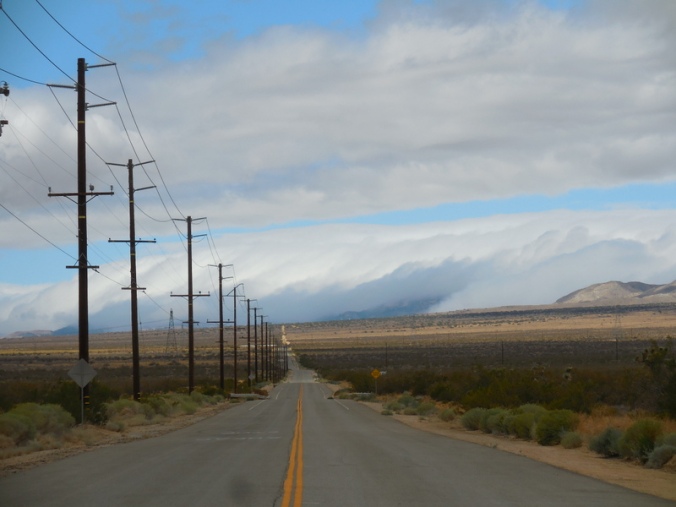 Clouds flowing over the mountains

The whirling blades also meant a strong tailwind for us for the descent off the pass.  And a ripper it was.  We were riding 55-60KPH with zero effort.  All this fun came to a sudden stop when we reached the valley floor and had to turn slightly more windward.  We had 25 miles of massive crosswind.  The road was not too busy but it was a real push to reach Antelope Valley and lunch at the highly recommended Aztec restaurant – we had a great lunch and a nice respite from the breeze.

We eventually peeled ourselves away and onto Lancaster – where we found a Starbucks.  We didn’t want to reach our Warmshowers host too early and I needed an afternoon cafe.  We had our usuals and a great conversation with Pat Hogan – Pat is 75 and a former age group state champion in CA/NV time trials and track racing.  Pat always wished he toured but said that it was too late now for him.  We tried to talk him into giving it a go – who knows we may see Pat on the road one day.  It was nice visiting with him.

From there it was on to Evelyn and Roberts’s house (where they live with Kay, Evelyn’s mom).  We had a lovely dinner and talked all kinds of bike stories.  Kay did a trip through Europe 35ish years ago and had lots of fun memories.  We plugged Evelyn and Robert for local knowledge and have decided to make a route change.  We’ve been following the Sierra/Cascades route more or less since Portland and are tired of the hills (not so tired of the downhills).  Evelyn and Robert pointed out a relatively easy route to the coast and were super keen on the coastal route down through LA to San Diego.

Local knowledge is always better than just looking at a map and we’re ready for a change.  So tomorrow we are starting the journey over to the coast.  It will take us a couple days to get there but we are pretty excited to try something new.  These changes make it easier for us to link up later in the month with our “Baja contact”.  We have a Baja contact near San Diego with whom we are hoping to get some experienced south of the border knowledge.

So, tomorrow we head to Santa Clarita, or thereabouts, perhaps Ventura by the weekend.  We’ll see how it goes.  Thanks again to Evelyn and Robert for hosting us, feeding us, giving us all your maps and helping us pick out a new route south.  You guys are so much more than warm showers!