We’ve arrived at the blip on the map called Woss.  In fact, we managed to find Woss Lake campground.  It had pretty mixed reviews but it turned out to be alright – nothing fancy but they have TP in the outhouses and enough budget to have garbage service, at least during the summer season.

But I’m getting ahead of myself.  We should talk about the day.  Today the riding was not overly spectacular.  In fact it was mostly just riding through wooded corridors on the main highway.  The road is ok but there is not much of a shoulder and a few log trucks, so we were on our toes all day.

What made today interesting was meeting three bicycle tourists during the day, three personalities so different that they really drive home the point that it takes all kinds.  First we met Josh from Melbourne, Australia.  Josh was maybe 30 years old, fit and zipping along.  He appeared to be a keen cyclist with lots of questions about the road ahead.   Next we met David.  David was older than us, from Vancouver and clearly knew what he was doing.  I suspect that David and Josh rode at very different paces.  They were both bicycle touring but couldn’t be more different in most other ways. 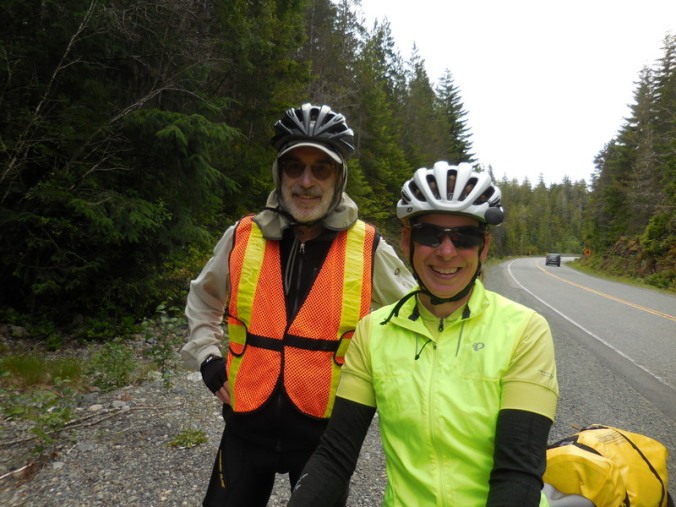 Then at Woss Lake, we met the third cyclist of the day – meet Michele from France.  He was probably older than David but it’s hard to tell.  He was sitting on a log next to his tent that was set-up in the boat ramp.  He had leathery skin (no shirt) and a very well travelled look about him.  He didn’t really know where he was going next after he reached Port Hardy and caught the ferry but didn’t seem care – full of life and footloose.

It just goes to show, you can’t judge a book by its cover.  All three of them were out riding, doing essentially the same thing that we are doing but doing it in very much their own way.  If you were to pass any of them on the road in your car however, you’d probably not even think of them as any more than just another bicycle tourist.

And speaking of bears – ok, I wasn’t speaking of bears but I should have been.  We saw one more black bear today, about 5k from Alder Bay, just before rejoining the highway.  That’s 19 blacks and 2 brown – so far.  The more interesting story about bears today however, involved our new friend Michele.  He is heading for Alaska with only a bicycle bell to deal with the bears.  Since Whitehorse, we’ve been carrying Mark’s old bear spray so today, Mark made a contribution to Anglo-Franco relations and donated his bear spray to Michele.  Good luck Michele.  And thanks Mark. 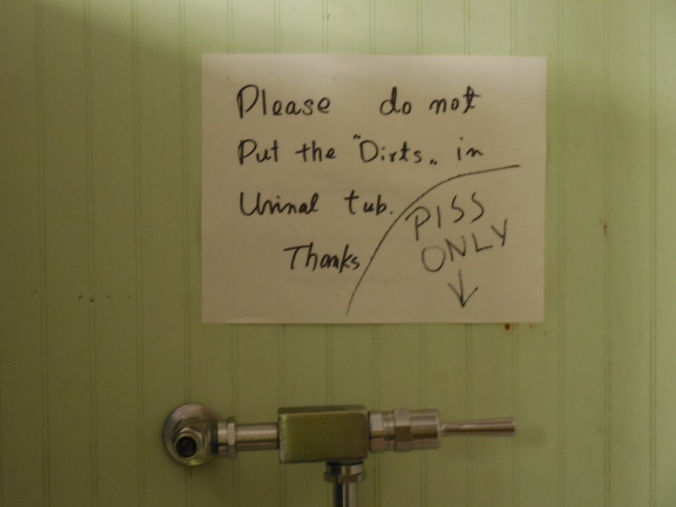 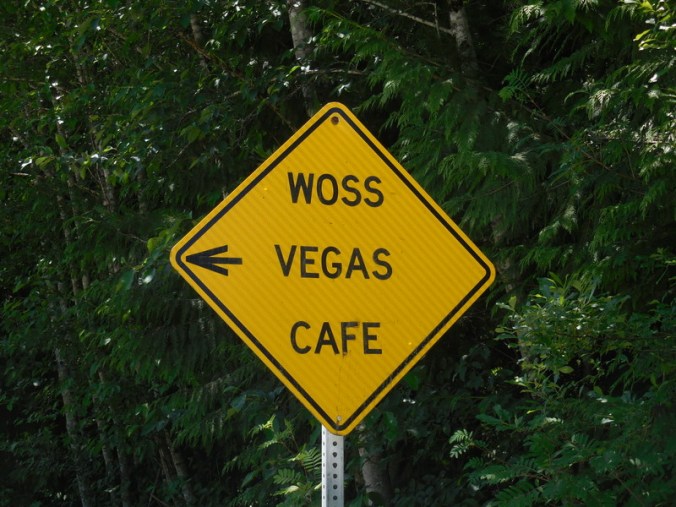 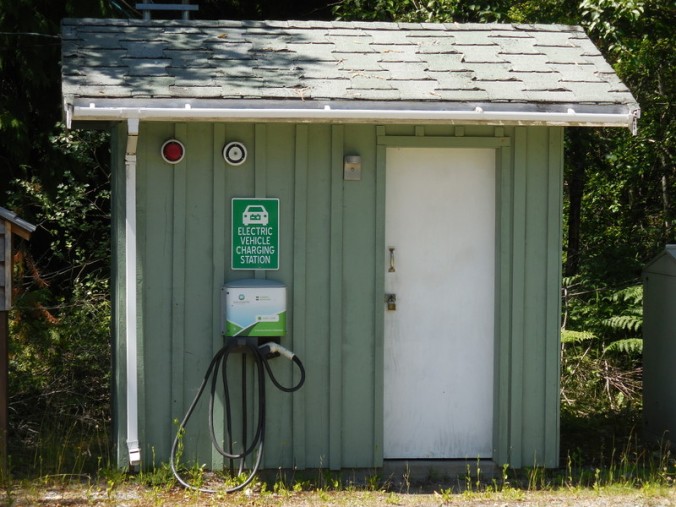 And a quick weather update.  Today we got finished up riding without leg and arm warmers and vests for the first time on the entire trip.  Nancy was quite excited by this as you can see in the photos below.  We had a second day of nice tailwinds as well.  Pay back for all those headwinds on the Alcan perhaps – whatever the reason, we’ll take it. 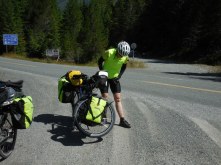 Other than the tourist and the slightly boring ride, we were entertained as well by Woss itself.  We are not sure if the Woss Vegas Cafe is still open.  We’ve heard conflicting reports from two locals and couldn’t find it when we looked around.  We’ll try again tomorrow on the way back through town.  Rather than eat at Woss Vegas, we ate at the Woss Pho shop – actually it was the Lucky Logger Pub, which now sells pho, sushi and burgers.  It is run by a Korean couple who spoke very little English.  They are rumoured to have good sushi (who knew out in the middle of nowhere).  We opted at lunch for chicken pho and chicken teriyaki – both of which were very tasty.  We didn’t expect to find anything near this good to eat in Woss.  While sad to miss Woss Vegas, we were pretty happy to find Woss Pho.  They even were kind enough to fill our water bottles and our water bladder, as we knew the campground did not have water and we would have to filter water from the lake.

The next search was for Woss Campground.  We got more local tips and headed out.  The road out of town turned gravel and bumpy and as we rode, we were really hoping that we hadn’t made a mistake.  The Woss motel (the Rugged Mountain Motel) at the junction was an option but we’d heard from David that it smelled like dead rats in the walls and other reviews equally complimentary.  As we went further and further down the gravel road, our doubts grew.  Luckily, a couple trucks from the local lumber company came by and gave us reassurance that we were on the right route.  Eventually, after one last worker check, we found the camp.  It’s rugged but the views are nice. 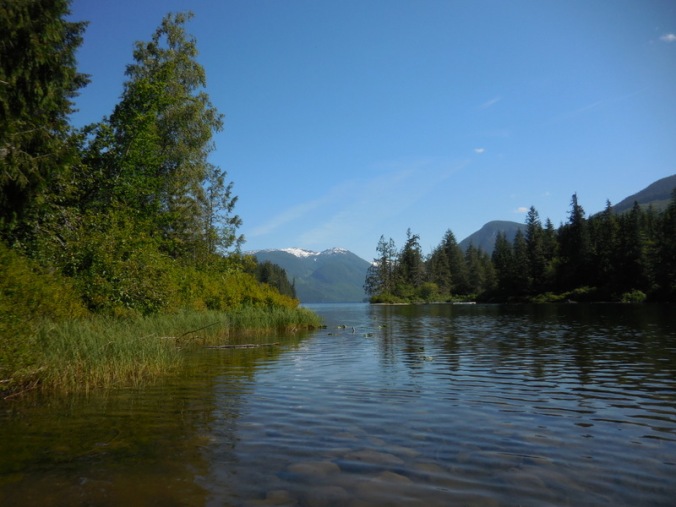 We both went for swims in the lake to clean up.  We only have photos of me because I was the only one to take a full plunge.  It was cool but not too bad.  Nancy made do with a sponge bath.  We are hopeful for a quiet night – our immediate neighbours are friendly and seem quiet and the campground is not completely full so we may be in luck.  I think tomorrow night would be a different story, particularly with Canada Day on Saturday.

Tomorrow we’re off to Sayward Junction, about 70k from here.  We think there is a long climb tomorrow (30k or so) but it sounds like it is gradual so shouldn’t be too bad.  There is rumoured to be a bakery/cafe along the way that has great cinnamon buns, but Michele, our French cyclist neighbour, said that it was closed when he went by.  Hopefully that was just for the afternoon or day and we will find fresh buns for morning tea.  If not, we have some smashed Fig Newtons to eat, though it won’t be quite the same.