Thwarted at 12:30 this morning! After a nice dinner at the pub we retired to our tent early to listen to a podcast and then be rocked to sleep by the crashing waves of Horseshoe Bay. Other than the waves, the caravan park was nice and quiet. And even though the pub was just across the road, the waves blocked out any noise coming from the pub. Peaceful.

That was all until about 12:30 when both of us woke at the same time to hear someone out messing with our bicycles, right next to the tent. I had locked them but last night as an extra precaution I also used a couple of our Velcro bag straps around the wheels. My thought was not that the straps would stop anyone, but rather anyone undoing the straps would make some noise and wake us up. Well, what do you know, that’s exactly what happened at 12:30 last night.

I was startled but somehow all 150 fighting weight wet pounds of me instinctually yelled out in a loud command voice, “Hey, get away from the bikes!” The perpetrators were startled and bolted off into the reserve just past the caravan park. I was so flustered, it took me what seemed like forever to get my tent fly open. By the time we exited the tent, we could see three people just down the hill at a reserve table. They were making an exit but had also slowed at this point to keep an eye on who came out of the tent. I tied to look big and tough – good luck.

We didn’t know what to do. We were pretty sure we knew who’d been trying to take the bikes but we didn’t see any faces and who knows, maybe the folks in the reserve (at 12:30 in the night) were just there for a picnic – sure. We thought about calling the police but opted to move the bikes under the tent fly, lock them tighter and loop the tent fly tie downs through the frames. If the would-be thieves came back and were keen to take the bikes, well, they’d have to take us and the tent with them. We slept with the tent fly open and an eye on the bikes the rest of the night. No further attempts were made on the bikes.

And to think, we rode through all of Central and Southern America, clearly surrounded by bandits all the time (not!), only to have our first bike theft attempt happen in safe old Australia – phew, what a night!

After that night, riding our bikes on a calm, clear Saturday morning seemed like just the escape we needed. We had to backtrack about 11k to get out on the main route north but we were happy to depart. We honestly enjoyed South West Rocks but our time was certainly coloured by the would-be thieves.

And out on the Macleay River – great colours

My bike at the Macleay River – nice to still call it my bike! 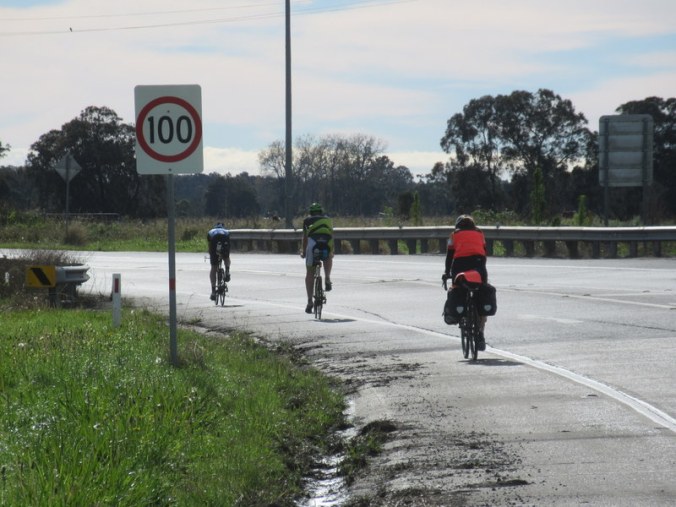 A couple triathletes passed, Nancy tried to catch them – haha

About 30k after departing we ran into another touring cyclist heading the opposite direction. We had a great roadside meeting with Russ, an Aussie from Ballina, who was heading south to Sydney. He was supposed to be riding across the USA right now but flights and the trip through Adventure Cycling had all been cancelled. Like us, he decided that he would not let Covid stop him going on a bike tour. He lives up near the closed NSW/Queensland border so naturally, he was riding south. If you read this Russ, thanks for stopping and be sure to shoot us any route questions you might have between here and Sydney. And naturally, if you have time, a coffee in Sydney when you arrive would be fun.

Nancy and Russ, a lovely stop on the side of the highway 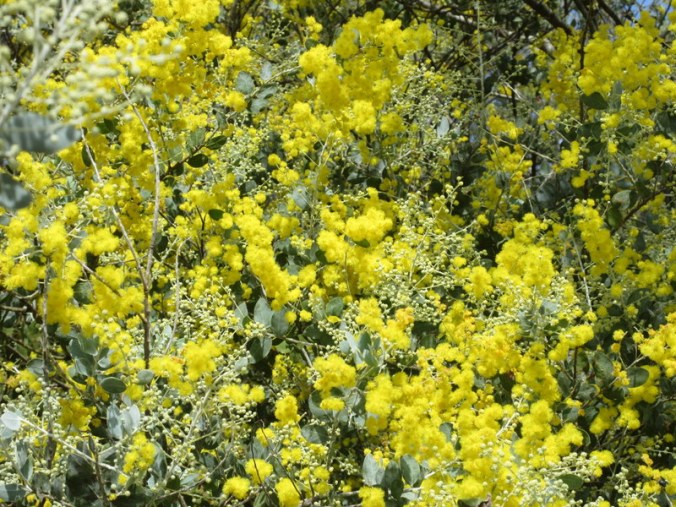 We had to spend a little time on the motorway after we met Russ but it was very short and again there was a great shoulder. We ended up stopping for lunch in Macksville. Macksville was sort anonymous until recently when a famous young Aussie cricketer died tragically after being struck on the head batting in a state match. Naturally, town has a nice mural for Phillip Hughes and they even renamed a freeway bridge in his honour. 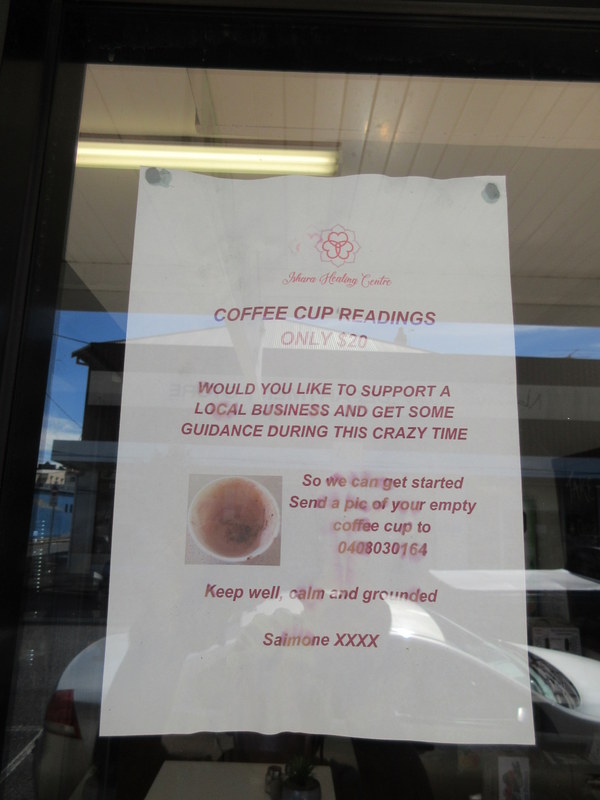 In Macksville, 20 bucks to read your coffee crema – bargain

It was a short ride from lunch to Nambucca Heads, our stop for the night. We had a couple caravan parks picked out but found one of those nice old 1950s onsite vans at the first one, Foreshore Caravan Park, and we grabbed it for two nights. It is supposed to rain tomorrow so we are calling another rest day here in the fancy van. Nancy may bake something in the oven, if she can find an apron (Senior Editor’s note – no, I will not be doing any baking.)  I will try to find some manly things to do in the yard around the van.

Seen entering Nambucca. Not THE Big Banana but we must be getting close now!

Before showers we borrowed a hose and washed all the mud off the bikes that we picked up on dirt roads so far on this trip. We don’t think we have any more dirt roads left so we put in a little extra effort to get even the tires cleaned. We still had time to drop into the fish market next to the caravan park and head to town for supplies. We picked up some fresh, caught today, black fish at the market then purely by chance got to watch a local fisherman clean a batch his own black fish.

Nambucca RIver near our van

Ok, watching someone clean fish may not be something you’d pick for a vacation highlight but the fish cleaning stand is right on the Nambucca River’s edge and pelicans hang out at the station just for these moments. As the fisherman filleted each fish, he shared the carcass with the pelicans. They stomped around, pushing and squawking until finally one of them would get the fish in their mouth and start trying to get it aligned so it could be swallowed. A couple hopeful pelicans would follow the winner but all the others returned to the station to await the next offering. It was probably more entertaining than it sounds. Best of all, we got some black fish cooking tips from the fisherman.

Back at the caravan, we enjoyed the last half hour of sunlight sitting at a picnic table overlooking the Nambucca River, sharing a bag of fancy popcorn. I know, aren’t we exciting! Anyway, it was nice peaceful and we have tomorrow reserved for a proper look around Nambucca Heads. Our bikes will be safely tucked in our caravan. We may put the Velcro straps on them, just to be sure. More on Nambucca Heads later…

Sunset over the Nambucca River