Rain was forecast today and we are ahead of schedule for our return train ride from the Big Banana, so today we decided to stay dry and hang out for a day here in Port Macquarie. Since we really don’t have a hard and fast fixed timeline, it seemed a shame to race out of town this morning, especially since the first 30k are on an unsealed road and this morning’s rain would have made it messy.

Before today, we didn’t really know what to think of Port Macquarie. About 50,000 people live here now but from our perspective it’s more famous for being “half way between Sydney and Byron” – as in Byron Bay – it was just a town on the highway to us.

Port Macquarie was founded as a penal outpost in the early 1800s and has a pretty dark history. Only the “worst of the worst” prisoners were sent here. If you were shipped out to Australia as a convict and you re-offended here, they’d put you on a transport ship and send you north. There was probably never a good time to be a convict in Australia but being a convict in Port Macquarie, Australia probably made the bad even worse.

We walked a good part of the town, the waterfront, the downtown area and some streets near our hostel. We were on foot so it’s probably not 100% fair but my summary of town is: “a series of car filled roundabouts that connect busy streets”. There a few old buildings with character but no nice old downtown area like we saw in Newcastle for example. Port Macquarie is probably too big to be a quaint small town and too small to be a vibrant city. We thought it was bigger but it is only the 9th largest town in NSW.

For me, the two photos below encapsulate the town’s vibe somewhat. The first photo is of a charming small church on the edge of the downtown area. It’s a cute building that no doubt has an interesting history. But the second photo tells a more complete story as right next to the church is a busy roundabout complete with a Kentucky Fried Chicken drive-through. Perhaps a little more thought could have gone into the planning/layout of how things interconnect. Perhaps.

Photo from the marketing flyer 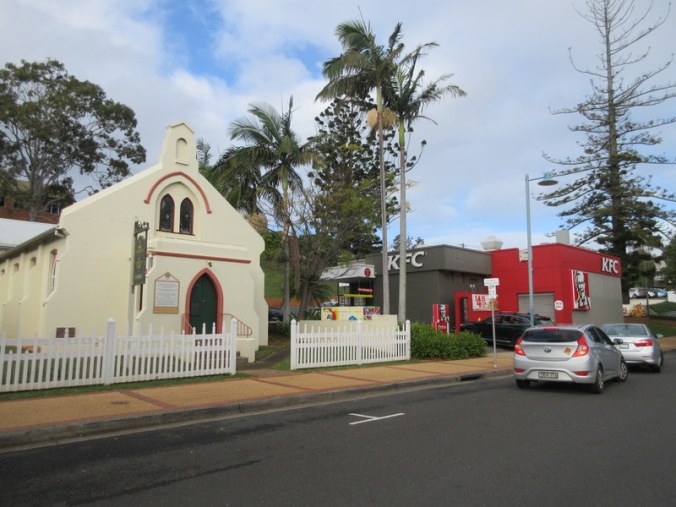 And the real world, a drive-through with a queue

I hope that doesn’t sound overly negative as we did find some charm here in Port Macquarie. We had hoped to visit the famous koala rescue hospital but unfortunately it has closed to the public. It is still open and doing good work, they just don’t offer tours any longer. Port Macquarie has tried to build on the koala theme however with a project called the Hello Koalas https://www.hellokoalas.com/. The koala project is similar to the cow projects seen in other parts of the world. There are roughly 70 fancifully decorated koala scattered around town and throughout the district. We found two of the koalas on our wanderings, plus one koala wannabe, captured in the photos below. 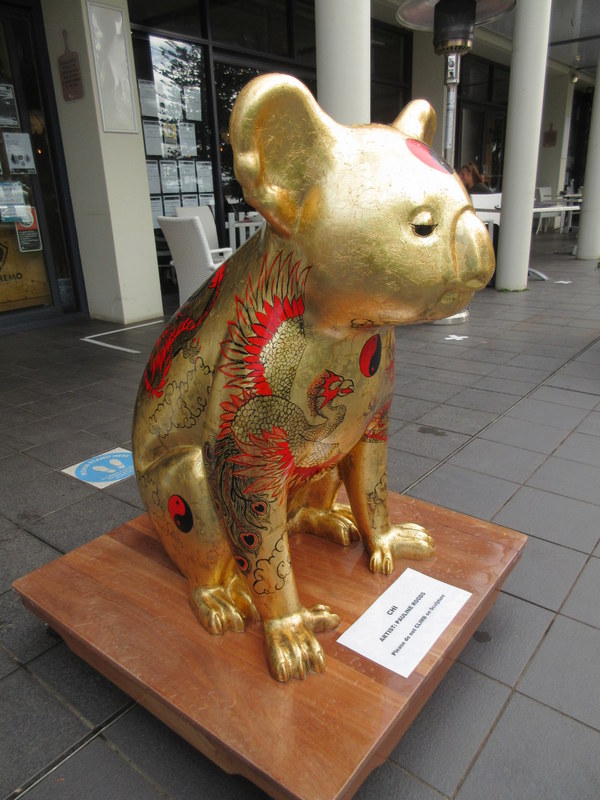 We had a nice stroll along the waterfront where we spotted more dolphins and some colourful rocks. I was again too slow with the camera to capture the dolphins but it does make you feel good about the ecosystems on the coast to see them about – you’ll have take my word for it. There were a bunch of guys fishing on the waterfront as well – catching a bunch of fish as we passed – more signs of a healthy environment.

As for the rocks, somewhere along the way tourists visiting Port Macquarie decided that painting a rock on the breakwater would be a good way to mark their vacation. No one seems to know exactly when this all started and as it is sort “ok” if you paint over someone else’s art, the oldest painted rock surely has been covered many times by now. They try to keep certain areas paint free but in the paint areas, the rocks add an interesting visual to the breakwater. We don’t generally carry paint with us on bike tours so we had to settle for just admiring the rocks painted by others.

Colourful breakwater in the sun 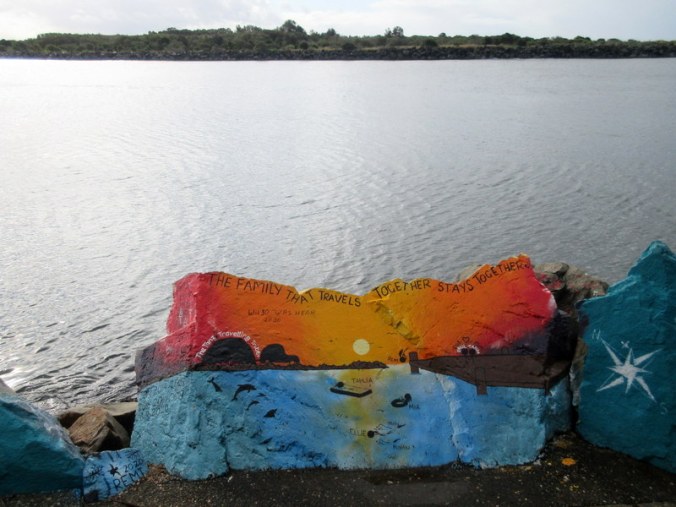 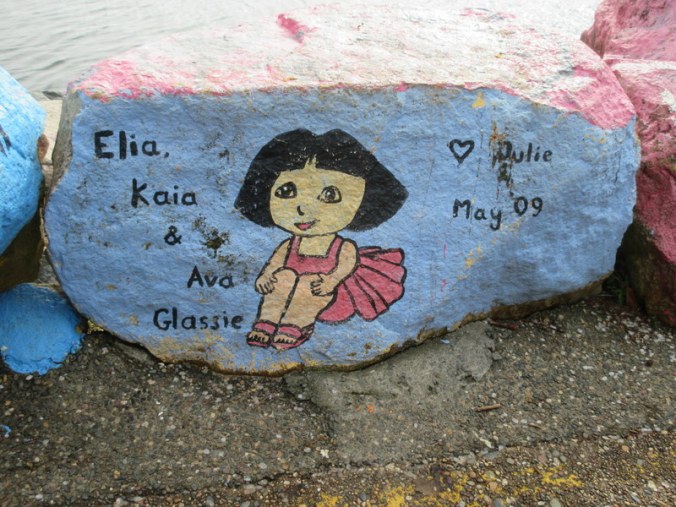 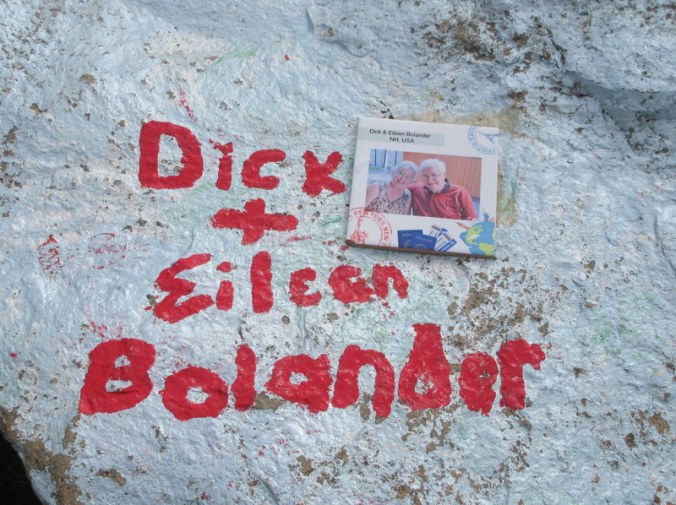 Wouldn’t you love to know the rest of the story?

Complete with hundreds of mirrors

The whole gang was here in ’18 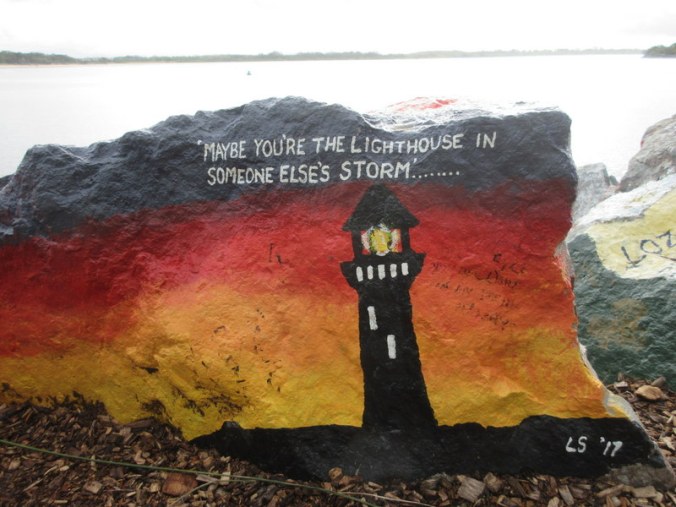 We found some good rest day food in Port Macquarie as well. We had a wonderful Turkish pide for lunch and found a fantastic bike shop/espresso shop just around the corner from the hostel for brekkie. The bike shop guys gave us the skinny on the roads we are planning tomorrow and indeed it seems like letting today’s rain pass was a good idea. The road is maintained but it’s a farm road and would been mucky today. It looks like we can escape town out the back road by the hostel and skip riding any of the previously mentioned roundabouts – happy days. 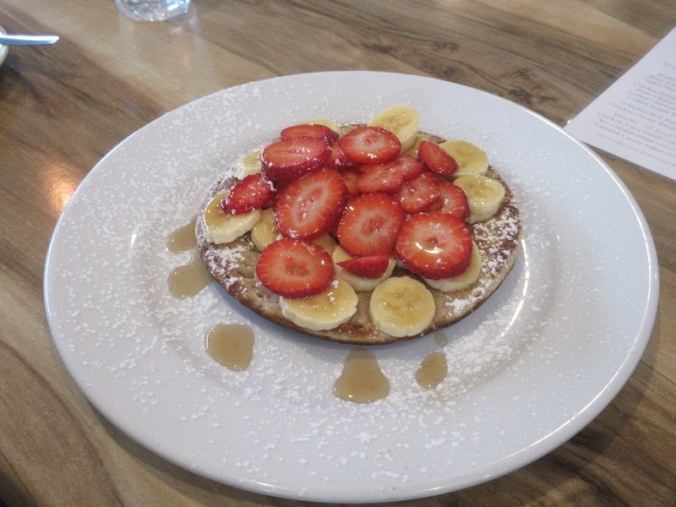 Nancy gets her pancakes – somewhere under all that fruit 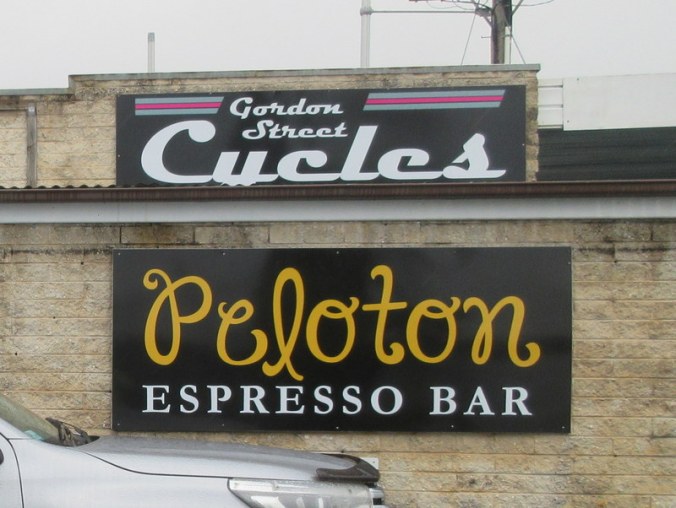 Two connected businesses – how lucky are we?

Who would have thought, in the middle of Port Macquarie

The forecast for tomorrow is much improved and so long as I sneak out of the hostel and buy Nancy a nice coffee, she said that we could have an early start tomorrow. We are heading north to South West Rocks (I know, figure that out, how do you head north and arrive at South West Rocks?). You can reach South West Rocks by taking Pacific Highway but we have found more of those delightful coastal back roads and should be able to avoid crowds. We’ve had a nice day off here in Port Macquarie – we only scratched the surface but at it’s more than just a dot on a map for us now.

This one is for our stalker, Andy. Nancy’s pancakes were almost as good as Dee’s. Read here for rest of the story here