I know, you’re thinking that I’ve got yet another typo in the title of this blog. Doesn’t the saying normally include a plural of the word banana? As in “I’m going bananas”?  Well keen readers always on the lookout for my typos, in this case, banana is correct. But you’ll have to read on to see why.

As of June 1st, most states in Australia have rolled back “lockdown” restrictions. Pubs are open, restaurants are open, hostels are open, national parks and caravan parks are open; churches, weddings and funerals are all back on. Everything is being done with “appropriate” social distancing but it sort of feels almost normal – the new normal, I guess.

Even with all the re-opening, we still have one rather stark reminder of Covid’s presence – interstate and international travel remains mostly closed. A number of states in Australia closed their borders at the beginning of lockdown. The “closed” states are all doing really well with the virus, mostly having less than 10 known active cases within their borders. As such, they have decided to keep their borders closed for a bit longer, to be sure to be sure, I guess. In addition to closed state borders, Australians are not allowed to travel internationally. Closed state and international borders mean that if we want to go on an adventure, then we have to stay within boundaries of New South Wales (NSW is our home state). So much for flying somewhere warmer in one of the northern states or sneaking off to Bali.

There is a lot to see in NSW but it is winter here so heading inland means cold temperatures. Well, Aussie winter cold temperatures – not often below freezing, but cold enough to make a bike trip less fun. Heading along the coast is definitely the way to go if you want to stay warmer in the winter. Naturally, while heading north won’t guarantee warmer weather, heading toward the sun (north) is the best bet for this time of year in NSW. If you head north from Sydney, there are enough interesting things to see and a point to point trip is possible. All you have to do is start in Sydney, pick an endpoint town where Australia’s east coast interstate rail line stops, ride your bike there and then hop the train to get back home.

After lots of staring at maps, we’ve settled on Coffs Harbour in Northern NSW as our escape destination.

We’ve never been to Coffs Harbour but we know that it is the home of the “Big Banana”. We’ve seen a few Australia’s famous “big” roadside attractions such as the Big Lobster at Kingston, SA, the Big Merino at Goulburn, NSW and the Big Galah at Kimba, SA. Somehow, the Big Banana has eluded us. In relation to the blog title, the Big Banana is indeed a single large banana, not a bunch of bananas. So, today’s blog title is correct; we are Going Banana, not Going Bananas. 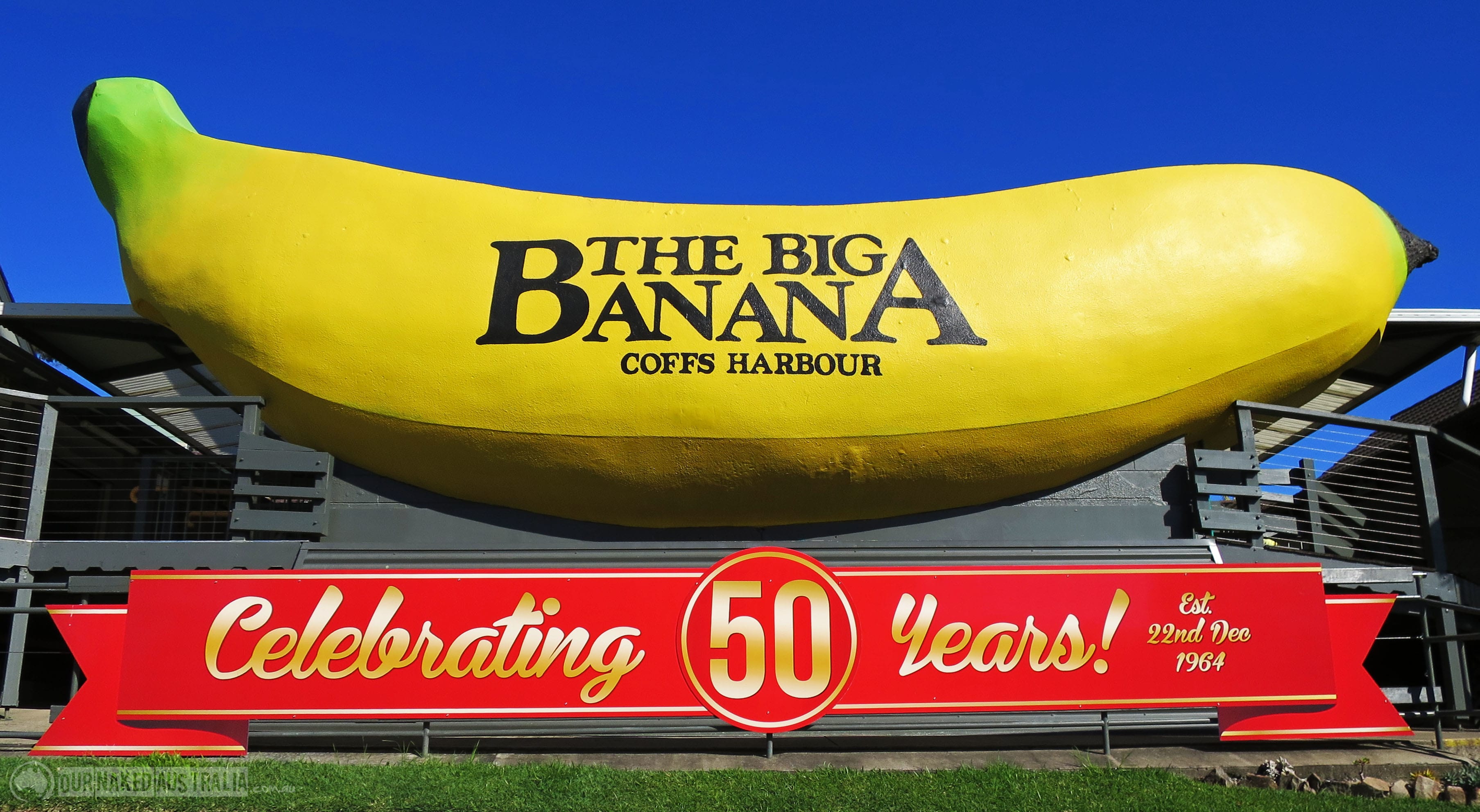 Here we come, The Big Banana

The Big Banana is one of Australia’s original “big things built on the side of the highway”. I’m not sure why they are so popular here but today there are roughly 150 big things scattered around the country. The Big Banana was built in 1964, making it one of the oldest. Only the Big Scotsman, the Big Santa Claus and a couple big dinosaurs predate the Banana. The big dinosaurs may have been built as scientific replicas, all before supersizing things for tourists became popular – so, the big dinosaurs don’t count in the unofficial top 5. This makes the Big Banana number three on the all-time list. Keen adventurers chasing the top 5 original Big Things can’t consider themselves legitimate without making a trip to the Big Banana. We certainly want to be legitimate, so off we go, up the coast chasing the Big Banana.

Anyone thinking that the Big Banana is just a quick photo stop would be sorely mistaken. In the 50+ years since being built, a full-service tourist destination has grown up around the Banana. Today, the Big Banana site includes the original large walk-through banana, a downhill toboggan ride, an ice skating rink (yes, in sub-tropical Australia), a water park, a restaurant, a gift shop and the always popular World of Bananas educational experience. Naturally, there is also an actual banana plantation and for the keen, plantation tours.

Pre-Covid, the Big Banana was attracting as many as 150,000 visitors annually. This year visitor numbers will obviously be way down. We’d hate to see the big things getting boarded up so it’s the least we can do – we’re Going Banana.

Depending on how many side trips we make, we think it’s about 700k to from our house to the Big Banana. We are not really on a schedule but are planning about two weeks to complete the trip, so it shouldn’t be overly stressful mileage wise. As many things only re-opened on June 1st, we are not sure what we’ll find in the way services. We are taking our camping, cooking and sleeping gear just in case we have to rough it.

Like our last bicycle trip here in Australia, we are going bikepacking style on this trip. That is, slimmer, lighter bags, limited gear and fewer changes of underwear (Senior editor’s note – speak for yourself, Dave). We’ve added small rear panniers but are trying not to overload up the bikes. We are not sure about taking a computer so we may have to revert to hand written notes that we type up at the end of the trip. Nancy will try shooting out a few Instagram posts along the way from the mobile phone (Instagram handle – @leavewithoutpay).

So there you have it. Rather than sit around home and go bananas, we are Going Banana. It’s not the grand adventure we hoped for this summer (we intended to ride the length of Japan this northern hemisphere summer), but it’s better than sitting around and waiting for the latest CNN Breaking News and worrying about the demise of democracy. And really, who amongst our readers could have imagined the world we are living in today a short three or four months ago. We are lucky – we are healthy, our country is nearly virus free, we can still ride our bikes and the forecast for the next couple of weeks doesn’t look overly cold or wet. In the big scheme of things, we must focus on the good things – life is good.