Brekkie was delivered to the room right on time at 6:30. Surprisingly, the hotel seemed to really fill up overnight and the carpark was completely packed. As planned, we were on the road by 7AM and as forecast, it was quite a bit cooler – 35c yesterday, 15c today. We had very little traffic on Coopers Road leading out of Kandos or back out on the last bit of the Bylong Valley Way. If anything, we were more worried about running into roos than we were about car traffic. Starting earlier meant that there were more animals still up and stirring (sorry no photos, they all run off pretty quick when they see us). 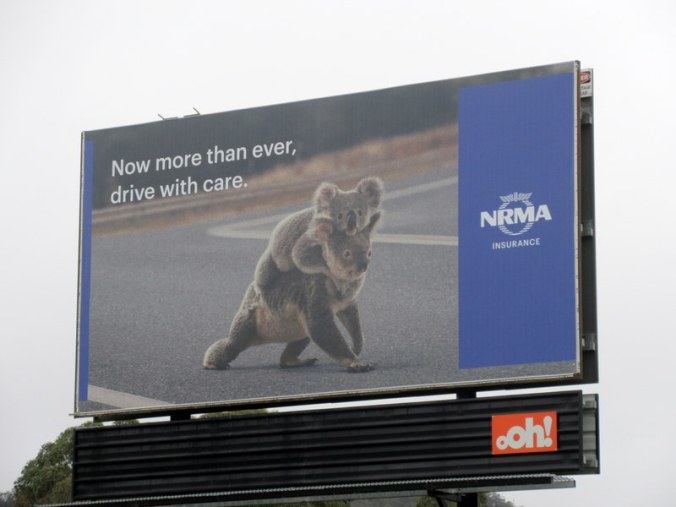 Billboard just as we started on the Castlereagh Highway – you hardly ever see koalas in the wild – even so, this sign is really important for the car drivers out there

We had one long climb early on the highway to the top of Cherry Tree Hill. By the time we reached the summit, we had climbed up into the clouds. It was a little wet but at least at this point, not from rain, just misty cloud. The summit was actually higher than Lithgow but it was far from downhill the rest of the ride – the highway crosses a good number of creeks and is quite undulating. 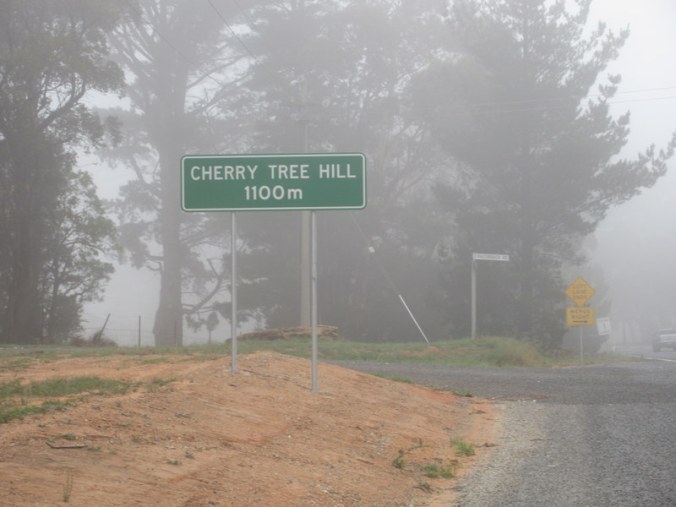 At about 46k we pulled into the small highway berg of Capertee where we found a warm cafe and friendly owner ready to make us flat whites and nice warm muffins. There is a famous old roadhouse in Capertee but it wasn’t open as we came through. The roadhouse would probably make a good overnight stop – noted for future trips. 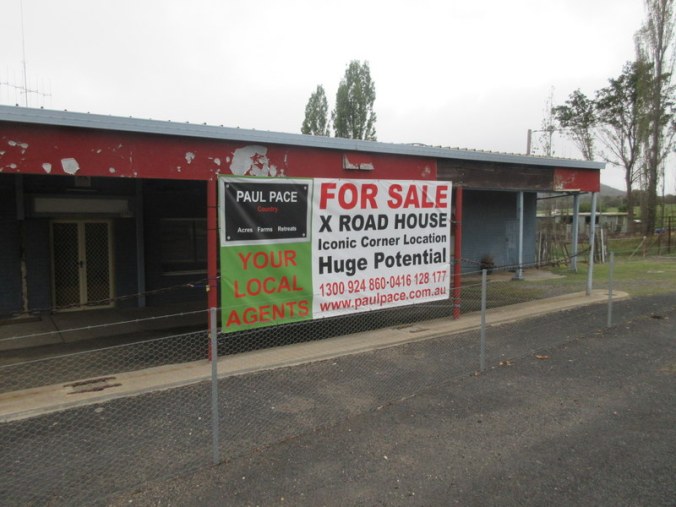 The next longish climb on the highway summited at Pearson’s Lookout. There was a spur road and little extra climb required to reach the lookout proper but I managed to convince Nancy that it was worth the effort. The lookout afforded nice views of the Capertee Valley. The sign at the viewpoint claimed that the Capertee Valley is the second largest enclosed canyon in the world. For the record, the deepest and widest canyon in the world is the Grand Canyon of Yarlung, in the south-eastern corner of Tibet. The Grand Canyon in the USA is deeper than Capertee but not deeper than Yarlung. And Capertee is wider than the USA Grand Canyon – phew, glad we cleared that up. 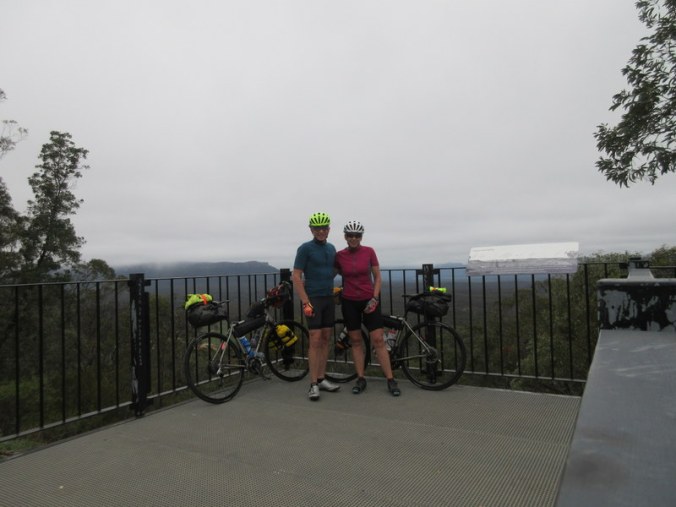 Little cloudy up here at the viewpoint 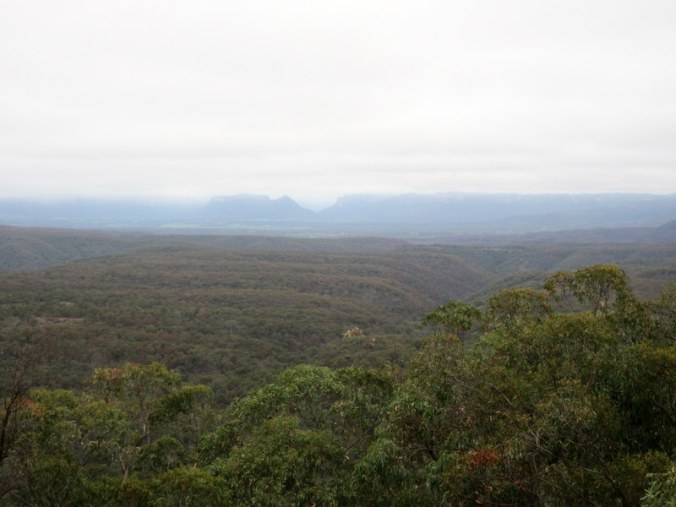 At the viewpoint, with the rains holding off, I had the idea that we might ride past Lithgow and all the way to Katoomba – our planned stop for the following night. I didn’t say anything out loud yet as I thought maybe we should get a little closer to Lithgow first. While the ride all morning was more up than down, we made really good progress. On the last hill before Lithgow, at just past 11:30AM, I sprung the “if the weather holds, Katoomba dash” idea on Nancy. Puffing up a hill, she wasn’t at first all that keen. By the time we reached town, she’d kind of warmed to the idea.

Neither of us was looking forward to staying Lithgow. The last couple times we were there, both Sunday afternoons, the town had a definite abandoned feel to it. To our surprise, riding up the main street at mid-day on Tuesday, there was a lot more action –shops were open, people were bustling about and there were plenty of places to eat. We popped into the bakery for a pie and further discussions about pressing onwards. 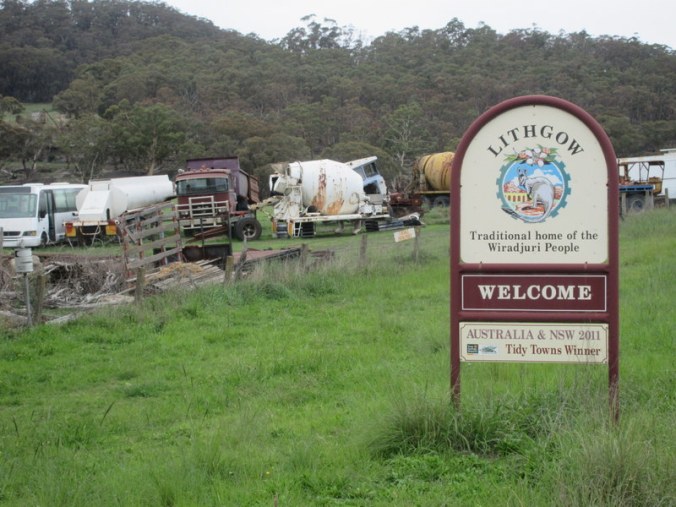 Lithgow isn’t a bad looking town. But seriously, how can you put up a sign claiming to be a Tidy Town Winner right next to a truck wrecking yard?

It was pretty cloudy but there was no rain yet. We checked the latest forecast and heavy rains were called for later in the afternoon and for all of the next two days. We’d already ridden 95k and climbed over 1,000 meters but we felt pretty fresh (Senior editor’s note – I wouldn’t say ‘fresh’, more like not completely dead yet). The road to Katoomba was pretty steep with another 1,000+ meters of climbing but it was “only” 45k. If we stayed, we could have had a nice, relaxing afternoon. If we pushed on, we could make it or possibly worse case get plastered by the rains. After lots of back and forth we decided to make a run for it.

It was only 16 degrees at this point and we knew it would get colder as we climbed. We put on another layer of clothing and got our raincoats ready just in case the rains caught us. We turned on our flashing rear lights as we could see the road from town climbing into the clouds. The last time we climbed Bells Line Road out of Lithgow on bikes, we were on fully loaded touring bikes. Our memories of the climb were of a super hard effort. Today the climb seemed more manageable, but still pretty steep, particularly on the initial section where the gradient hits at least 14%. Score a point for the ultra-light touring set-up. 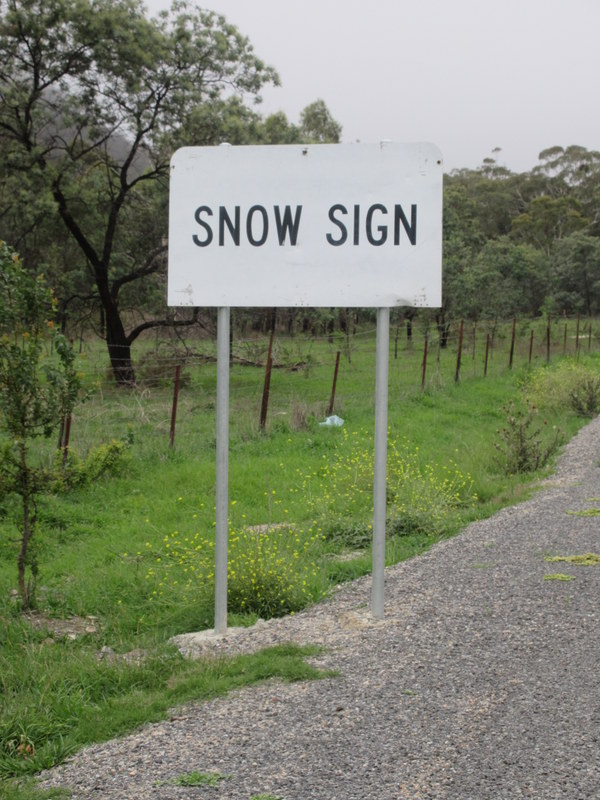 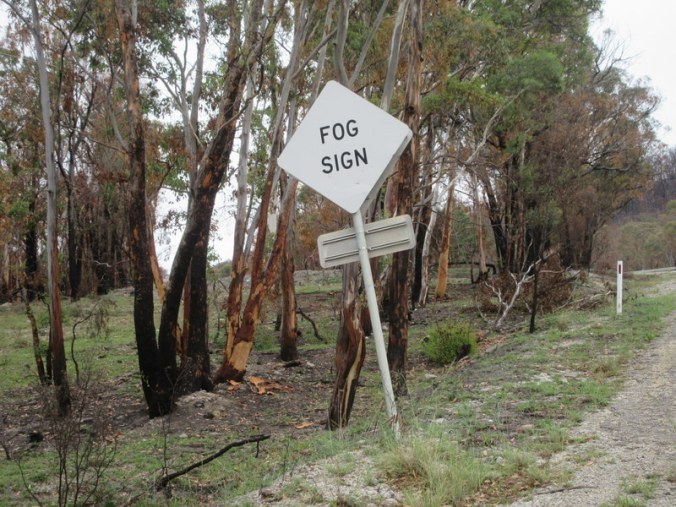 As we climbed we entered the clouds and had sort of a mist but the road surface remained dry. There was a bit of traffic but mostly everyone was driving slowly due to the conditions. After the steep initial section it was just gentle up to the turn-off towards Mt Victoria on the Darling Causeway road. Traffic dropped to near zero once we left Bells Line Road. In fact, had it not been for crews working on restoring fire-caused train and powerline damage, there would have been almost no traffic at all. The mist seemed to get heavier but still, somehow, the road remained dry.

The Darling Causeway cuts through part of Blue Mountains National Park where the summer fires had been particularly hot. Even though there have been some rains, the trees don’t yet have their usual post-fire sprouting. Aside from the sheer amount of forest that burnt this year, the temperature which the fires burned is a real issue. Trees here need heat and smoke to trigger regeneration but super hot fires can be so extreme that trees actually die. It will take years for some areas in the Blue Mountains to recover. 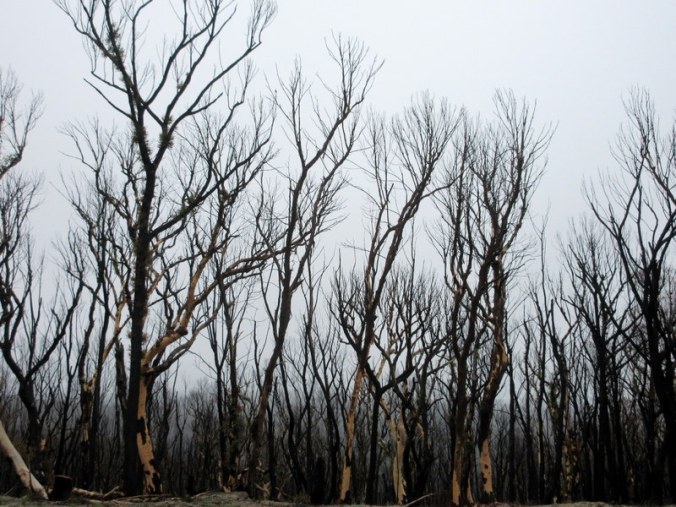 Not sure how long this forest will take to come back.

At Mt Victoria, we reached the Great Western Highway. At this point the mist was as thick as it had been all day. The GW Highway is the major route through the Blue Mountains and carries a lot of traffic, cars and especially trucks. Some parts of the highway are great – proper shoulders, 2 traffic lanes each way and lots of room. Other parts of it are a bit of a joke, one lane each way, no shoulder and everything squeezing between narrow rock cuts on both road sides. Knowing this, we stopped and put on our high-vis rain gear. It wasn’t nearly wet or cold enough to have on these extra layers – we did it simply to be more visible and as safe as possible. 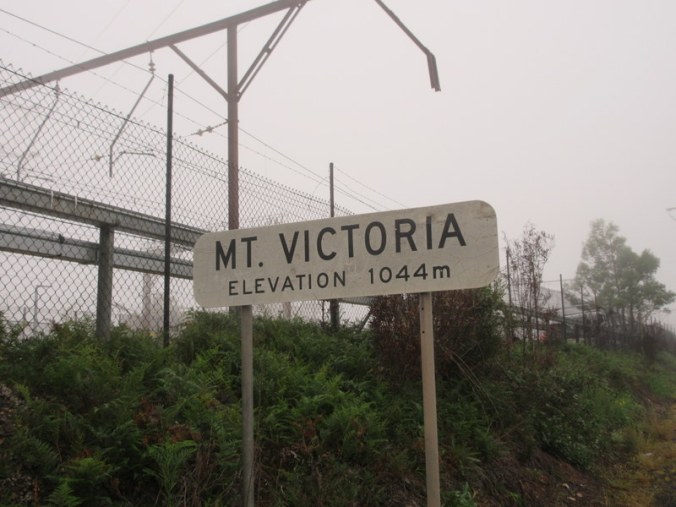 Second high point of the day.

The road surface still remained dry but we had to “finger squeegee” our glasses as we worked our way towards Katoomba. At some point we stopped and removed the glasses completely. With the traffic, the narrow road sections and the mist, it was a bit white-knuckle but we rode in tight formation and arrived safely in Katoomba just on 4PM. We headed straight for the Katoomba YHA and our luck held as they had rooms open available. 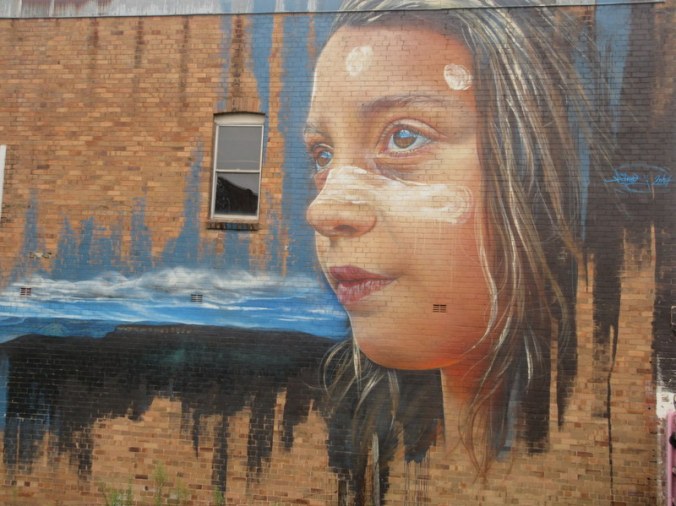 After getting cleaned up and putting the bikes in the YHA bike room, we decided to head out to find something to eat. As we left the hostel on foot, we were met with those forecasted heavy afternoon rains – we didn’t care, we made it! We celebrated making the right call in Lithgow and our overall good luck with some great Indian takeaway and a lovely Aussie Pinot Noir. 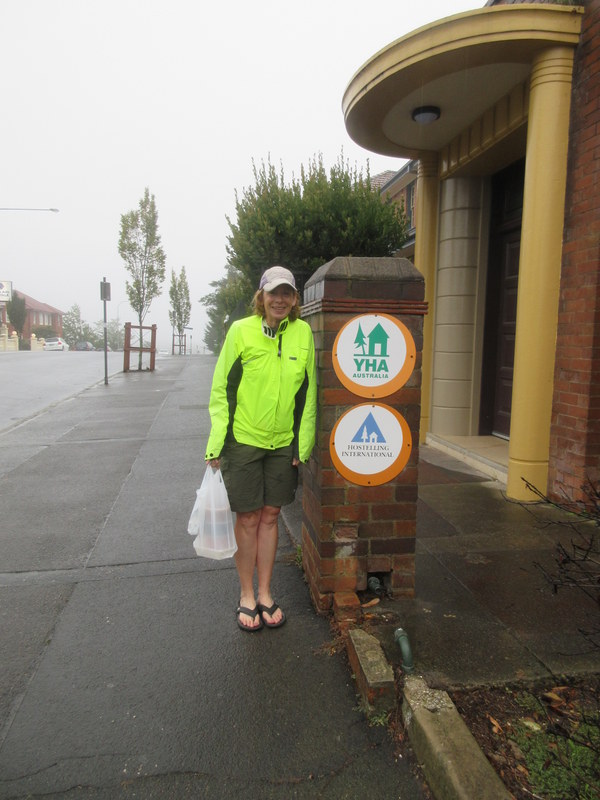 Happy at the YHA – What rain?

We have another 30k to ride tomorrow to finish the trip. Normally we’d catch the train home from Katoomba but the rains a few weeks ago washed out part of the line east of Katoomba. So we have to ride 30k, all downhill, to Springwood where normal train service continues into Sydney. But that’s tomorrow, tonight we celebrate another big day and our fortuitous timing! Who are we to complain about a little rain when everyone out here in the bush is celebrating!