For virtually the entire week of Cycle Oregon we had no mobile signal and thus no chance of posting blogs. This first blog will cover Days 1-3, in large part because it wasn’t until Day 3 that I found the time to actually get the computer out, make some notes and download photos. We’ll be posting follow-up blogs over the next few days.

The first three days were hard for a couple reasons. For starters, we had quite a bit of rain and very cold temperatures. Multi-year Cycle Oregon veterans were commenting that it was the “wettest ever”. We’ve certainly ridden in worse conditions but on our more recent long trips we would have taken days off to wait out the weather – not an option in the rolling circus that is Cycle Oregon. Rain slows everything down, from cleaning and packing up, riding and setting up tents in the next location.

The second factor the made blog write ups difficult was the time spent working the coffee booth.  As we mentioned in our previous blog, this year we volunteered to work on the Nossa Familia coffee van that services delicious coffee to the riders in the mornings and afternoons.  The booth and coffee gig was a blast overall but in the first few days everything we did we were doing for the first time and it was slow. The experienced team members were great help in showing us the ropes but showing us how to do something slowed them down from their normal tasks. Under virtually identical work and customer load conditions, we left camp 45 minutes earlier on Day 3 than we did on Day 1. The team’s efficiency improved dramatically in a short period of time, but we had to get through those learning curves.

Us in our Kitsbow caps getting ready to sell some coffee

There are a number of distinct jobs on the coffee crew, shot puller, milk frother, front of house sales, front of house runner, brewmaster, etc. We were supposed to rotate jobs but in the end, everyone settled into rolls and got good at them. This made us more efficient and worked out just fine. Nancy ended up on front of house sales, and I ended up being a brewmaster. There was naturally heaps of overlap and covering done by everyone but more or less, we stuck to our primary rolls all week.

Our typical Cycle Oregon day went something like the following:

4AM alarm – (yes, that’s 30 minutes earlier than we anticipated).  Quick clean up – brush your teeth, comb your hair (if you have any) and try to make yourself look presentable (at least not too scary) to customers

4:20AM – start brewing for Dave, start setting up booth for Nancy

5:00AM – open booth and start selling coffee, trying to think through the fog of sleep to add up all the prices correctly, including add-ons for alternative milk, extra shots, flavouring, and the extra 25 cents for supplying a cup if the customer doesn’t bring their own

7:30AM booth closes, stop selling espresso drinks but continue to be nice to the stragglers who come along and beg for tasty brewed coffee

2:00 to 3:00PM – arrive at camp, shower, set-up personal tents (your tent and everyone else’s tent who hasn’t yet arrived or tents for drivers who hadn’t gotten to theirs yet), catch your breath, finish booth set-up that drivers may not have finished, brew coffee to sell in the afternoon

3:00 – 6:00PM – sell coffee, brew more coffee, smile at customers through the raindrops no matter how tired you are

6:00 – 7:30PM – secure booth for night, pre-boil water for next day, clean everything, restock cups, tea, milk, water, whatever is needed

8:00 – 9:30PM – finish up anything not done before dinner, hang with crew, tell stories about funny customers or grand exploits of the day’s ride, decide who’s riding/driving the next day, decide who’s doing what jobs the next day

9:30PM – pass out in your tent knowing that you’re up again 6.5 hours later to do it all over again

If it sounds exhausting, well, it was. Just the riding would be enough to make us tired. Being part of the coffee team kicked tired up a notch or two.  Still, we managed to enjoy the rides, being part of the coffee crew and interacting with the riders every day as they tried to wake themselves up was great fun. 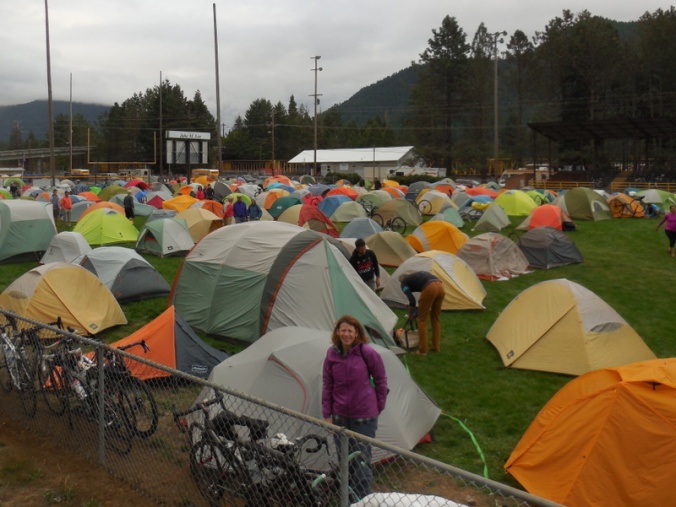 Here are some notes from the first three days that I scratched out when we finally got a breather during the afternoon of Day 3:

Day 1 Oakridge to Rainbow (65.8 miles, 3300 feet) – Cycle Oregon is well-known for being a challenging multi-day tour.  Challenging means lots of climbing each day and this year was no exception, with each day having at least 3300 feet of climbing and several days over 6000 feet.  Day 1 had the least climbing of all of the days but was a difficult day due to less-than-ideal weather conditions.  Day 1 saw us ride over up the Aufderheide Scenic by-way. The Aufderheide connects Highways 58 and 126, winding through the lush undergrowth of the Willamette National Forest. Going up, we rode alongside the Willamette River. Coming down the backside we rode along the McKenzie River.

The Aufderheide has a center line most of the time but it’s not a big road. It’s only open in the summer as there is so little use of it that it’s not worth plowing snow in the winter. This is one of those classic back roads that Cycle Oregon is famous for – a bit off the beaten track, going between points A and B in a much less direct way than the normal route.

We rode most of the Day 1 morning in the rain, had lunch in broken clouds at the top of the climb, then some sun and dry roads for the ride back down to Rainbow and our second night of camping (first night was in Oakridge before the ride started). We managed to dry tents out and get cleaned up before more rain rolled through. We had rain on and off all night. 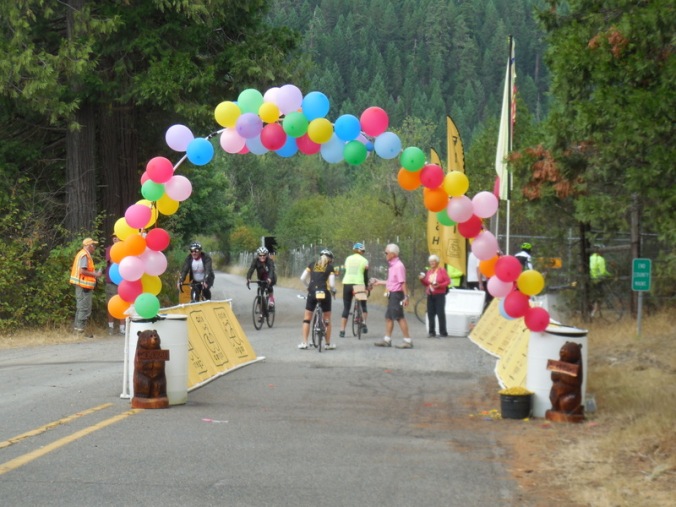 Finish line in Rainbow, OR

A nice treat, chocolate milk handed out at every finish line

Day 2 Rainbow to Tumalo (67.3 miles, 4786 feet) – All the rain overnight and the 4AM alarm left us a little groggy and not overly sure about riding this day. In fact, Nancy was pretty keen on not riding even though skies were lifting as we made and served coffees. Each day at least two coffee teammates have to volunteer to drive one of the Sprinter coffee vans but on a cold wet morning, there were plenty of volunteers. We waited until the last minute to make a decision about riding. In the end, the chance to ride McKenzie Pass again won out. We rugged up in rain gear and headed out.

The route for day two was basically up and over McKenzie Pass, lunch in Sisters and onward to camp in Tumalo. In our lifetimes, we’ve ridden McKenzie Pass twice, both times on fully loaded tandem touring bikes. The first time we rode it was in 1992 on our cross the USA honeymoon trip. The second time was a year later in 1993, when we rode the first 3 days of our friends Pete and Inge’s cross-country tandem trip with them.

McKenzie Pass climb is stunningly beautiful. You start at the bottom in a typical Oregon tall fir Cascadian rain forest, ride upwards to a series of dramatic lava flows at the top and then finally descend through a high desert pine forest on the other side. The climb for us was roughly 30 miles of uphill.

McKenzie Pass – all smiles with no rain

We started riding with lots of clouds and fog but even though we had wet roads, we never really got rained on. The climb itself was easier than either of us remembered – perhaps because we were on our light weight road bikes and not a heavy tandem! It also helped that we were riding pretty strongly through the mass of riders that got out ahead of us – there’s nothing quite like passing fellow riders while not “drilling it” to make one enjoy the climb even more.

View on the climb

There was not really room at the top of the pass for a proper rest stop but Cycle Oregon put one there anyway. We were glad that they did because we got to stop at the summit observatory to retake a photo that we first took 27 years ago. I kept my helmet to avoid any comparison of hairlines – haha.  At least the waistlines seem to be holding mostly steady after all the years.

Rest stop at top of pass

Us at the top of McKenzie Pass

Us 27 years ago – slightly warmer, slightly more hair (for some of us) and some zinc to protect my nose from the sun

Team at the Tumalo campsite

Day 3 Tumalo to La Pine (55.3 miles, 3357 feet) – On Day 3 we started out riding with 6 fellow Nossa Familia teammates and enjoyed a nice group spin up towards Mt Bachelor. There was a little rain overnight in Tumalo but only broken clouds for the ride up to a glorious sunny lunch stop on the mountain. Views of Bachelor were broken with threatening clouds building. 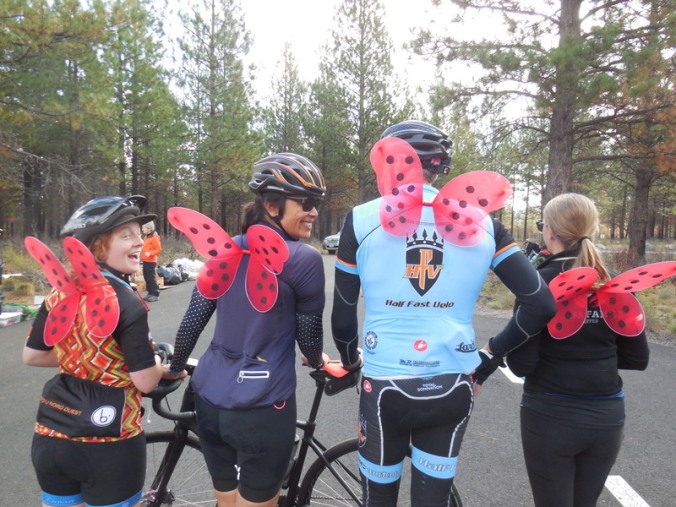 There was long decent after lunch and the temperature dropped as we rode down. It was pretty clear that we were going to get wet at some point and it didn’t take long for a deluge to arrive. We had off and on cloudbursts all the way to the wet finish in La Pine. As we rode that section, I shared the “wet feet = hotel room” rule with Augusto (the owner of Nossa), who we finished the ride with. He liked the rule but hotel room offers were not forthcoming – we set-up wet tents in a soggy field, spending a rainy afternoon huddled under the Nossa coffee marquee.

Throughout the afternoon and evening, we heard a never-ending stream of “wow, it is wet this year” comments.  It rained more again overnight.  The temps were also very low, and with the rain it was pretty clear most of the riders were very uncomfortable.

Even though the forecast for the next day was better, Nancy and I volunteered to be daily drivers.  We knew we’d have to give up at least one day of riding and Day 4, where some of the time would be spent on busy Highway 97, seemed like a good choice to raise our hand.  More on that tomorrow, for now all eyes were on the weekly forecast with fingers crossed for two days out when we were scheduled to ride around Crater Lake.