We’ve been in Western Australia for more than a month now and have really enjoying seeing a part of Australia new to us.  We debated about writing a post as we are, technically, not on a bicycle trip but we’ve really enjoy WA (so far) and thought it would be a shame to not share some pictures and observations.

After spending a month in Busselton in an AirB&B we decided to rent a van and drive back to Sydney.  We have 6 weeks to complete the 3,000 mile trek so that gives us plenty of time to check out WA and other remote areas of the country and to see if we like van living.

First about the van.  Because we have our road bikes and airline travel boxes with us, we rented a relatively large van from Apollo camper rentals.  We ended up getting a Mercedes Sprinter conversion, the longest version that Mercedes makes.  It is so long, we can leave the rear bed set-up all the time.  It has a full galley, toilet/shower and even a TV.  So it may be a little cushy to be called “van living”.  So far we like the van but have a long list of things we’d do differently if we ever convert a van ourselves.  The biggest issues are the overall length, bed position and lack of proper storage for the bikes.  If we ever convert a van ourselves, we’d build on a shorter wheelbase model but really, the whole van conversion subject is for another series of posts so I’ll stop there. 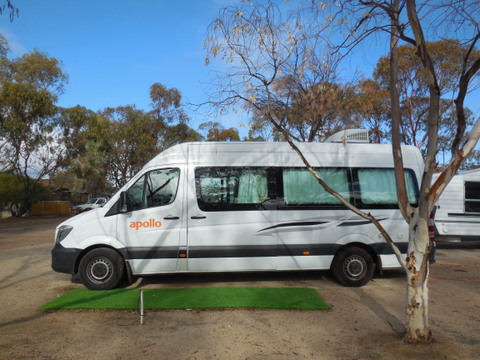 Our big van – and no, Nancy has not driven it yet!

And about WA.  For starters, WA is massive.  We’ve put close to 1,400ks on the van and barely scratched the surface of the southwest corner.  Our general pattern has been pick a destination that is 2-3 hours away, generally going towards Sydney, drive there, hang out, go for bike rides/runs and then move to the next stop.  So far, we’ve seen some pretty amazing things along the way.  I’ll briefly recount a few of the highlights.

Margaret River is known for wines – we stayed there four nights and hit a few wineries.  Yallingup is just northwest of Margaret River on the upper tip of the southwest cape of Australia.  We camped there right on the edge of the Indian Ocean for a couple of stormy days.  It was fun watching the waves roll in and to have sunset views out towards Madagascar (ok, we couldn’t see quite that far).  And yes, the wine is very nice. 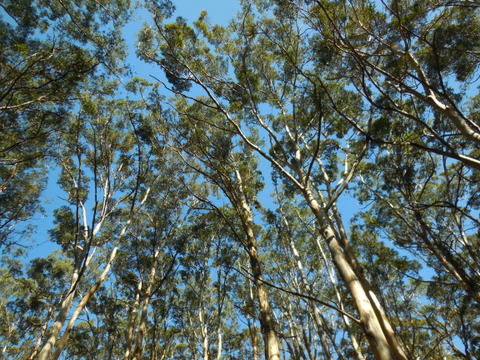 Big trees in the Boranup Forest near Margaret River 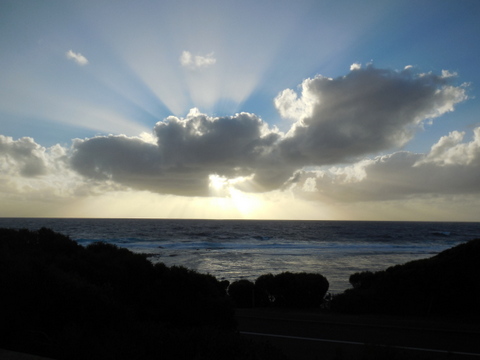 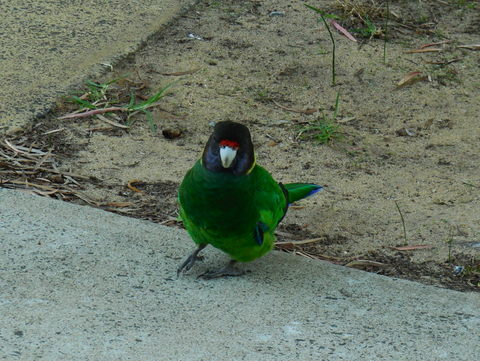 Camp visitor – these guys are everywhere out here in WA 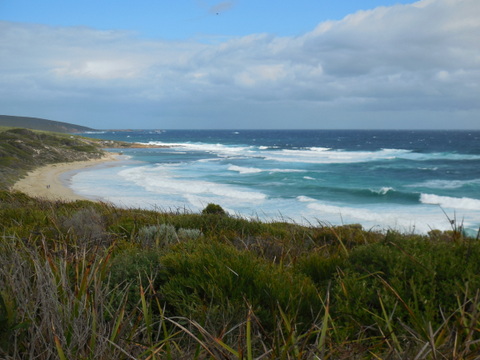 The beach in Yallingup

Augusta is on the lower tip of the southwest cape of Australia.  It is the end of the road, literally.  From town you can drive about 8k to reach Cape Leeuwin and a very photogenic lighthouse.  From the lighthouse, the next stop is Antarctica – swimming.  We camped back in Augusta for a couple days on the banks of the Blackwood River.  We watched local fishermen clean their catches and “feed the rays” with scraps.  Nancy was brave enough to put her feet in one day and yes, the rays came up to check her out as well. 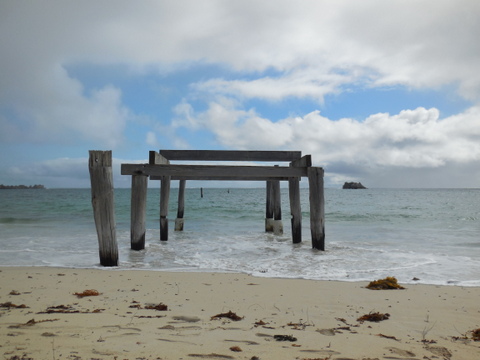 Hamelin Bay – the remains of an Indian Ocean jetty 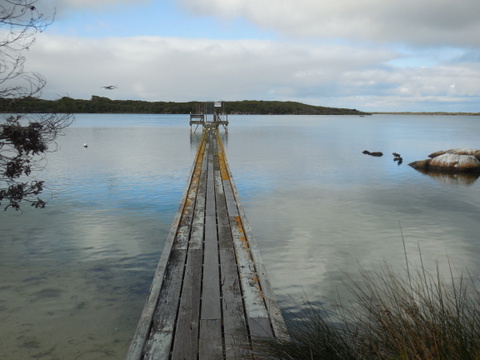 Blackwood River – just in front of our campsite 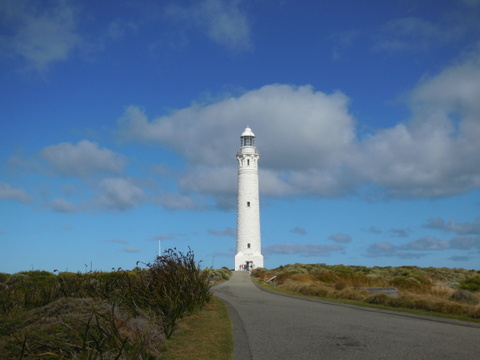 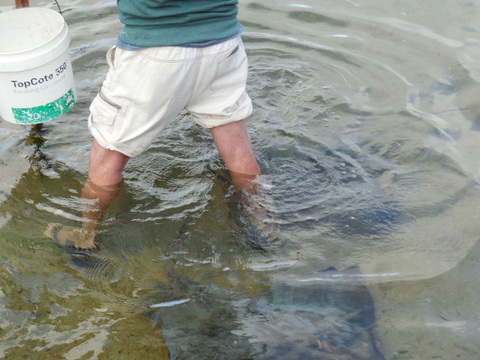 The drive from Augusta to Denmark was a long day – but mostly because we had so many things to stop and see.  In Pemberton, we stopped at one of the traditional fire lookout trees called the Gloucester Tree.  It was a 61 meter climb to reach the lookout platform on top – that’s 200 feet, climbing up what is basically a rebar ladder pounded into the tree, with near-zero safety protection.  We both climbed – not over thinking the risk factor being key to success. 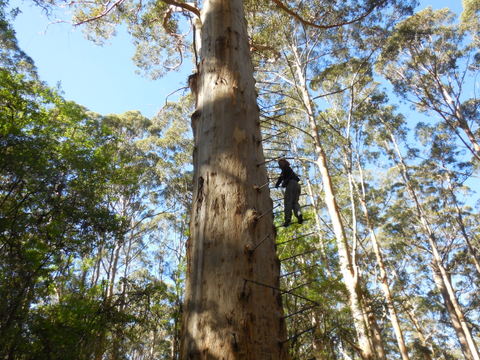 Our next stop was the Valley of the Giants where we climbed the tree top walk through an ancient stand of Red Tingle gum trees.  Almost all of the trees out here are gum trees.  The Red Tingle is a unique species that only grows in a small range.  Trees grow to 70 meters and live for over 500 years.  The walkway is an amazing series of bridges and girders that take you from the forest floor to the tops of the trees.  It was much safer than the lookout tree but the walkways still got to swaying as people walked on them – not for the faint of heart.

The drive from Demark to Albany is pretty short but we had a tough time making to Albany in a single day.  We made a quick stop at Greens Pool and were greeted by stunning blue waters of the Southern Ocean, plus some really nice looking rock formations at Elephant Rocks.  We could have spent a full day there but passed on swimming in Greens Pool, for fear we’d never get out. 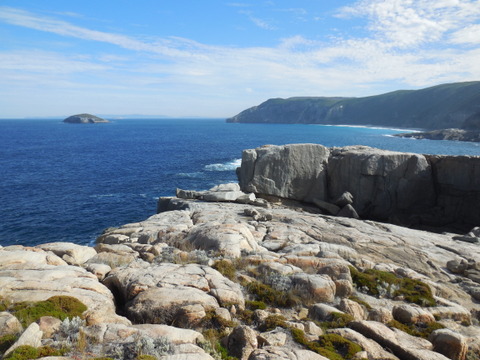 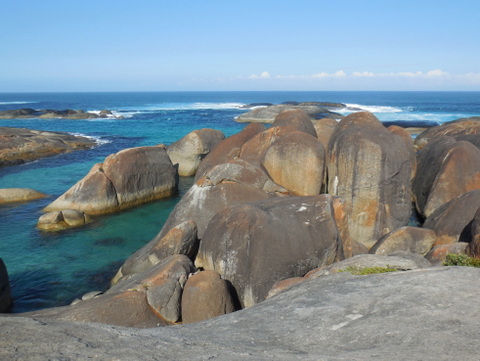 We thought we’d make a “quick stop” at the Albany whaling museum on the way into town and were really glad that we did.  While it wasn’t quick, it was very interesting.  The museum is located at the actually whaling station where they actively whaled from the early 1950s until 1978.  Who knew that it was so recent?  We took a tour, watched some great films and contemplated what gruesome, smelly mess it would have been when whales were pulled onto the rendering deck.  Several of the films included interviews with guys who worked there while it was in operation.  The museum was very well done, but it’s good to know that the brutal practice is no longer undertaken. 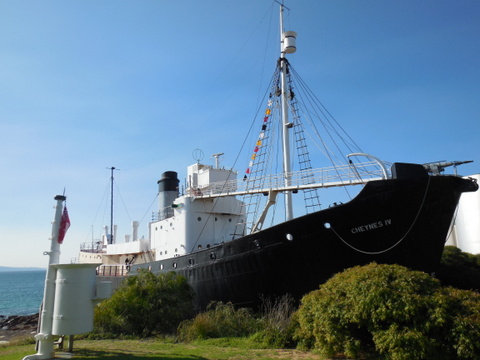 In Albany we were camped within walking distance of various restaurants and bars, including the place that won the best fish and chip shop in Australia last year (Hooked, on Middleton Beach).  So of course we had to go and test it out.  We give it a big thumbs up – fresh local fish, superb chips and cheery and helpful staff, well deserving of its award. 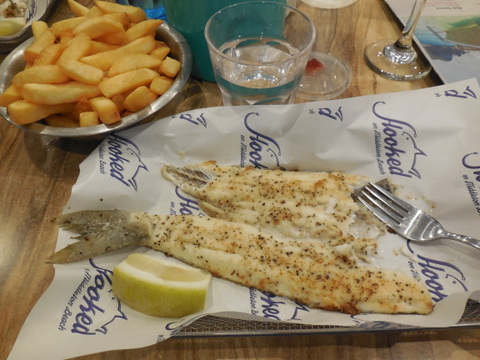 Hooked – the best fish and chips restaurant in Australia – yep! 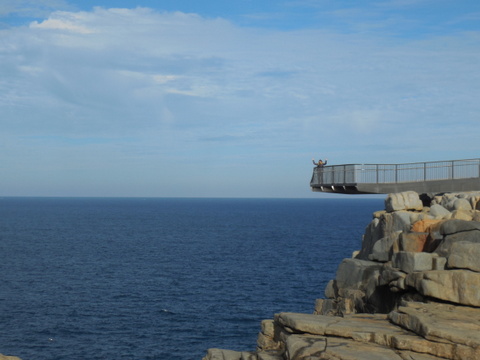 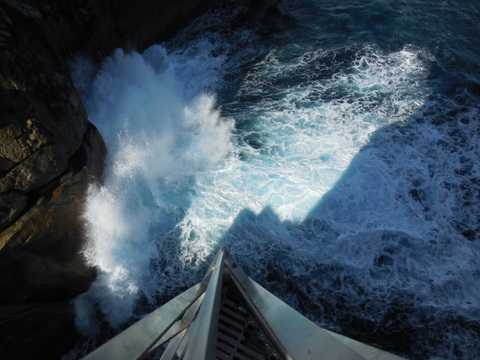 Looking down from the platform – yikes

We moved on from Albany in the general direction of Hyden.  Hyden is a very small town out in the western wheat belt.  On the way there we were delayed in the Porongurup and Stirling Ranges – delayed again, that is, by more stunning WA scenery.  Even though some weather was coming in, we managed to get a sunny afternoon and climb the Granite Skywalk, a remarkable feet of engineering in the middle of nowhere, on top of a very remote granite outcrop.  With no roads to the rocks, helicopters and abseilers had to be used to build it.  Who thought to build it and who did the engineer work in the first place, well those are unanswered questions.  We spent a night at a bush camp/caravan park out in the middle of nowhere that was surprisingly nice, with power, hot showers and a fun camp kitchen/lounge area. 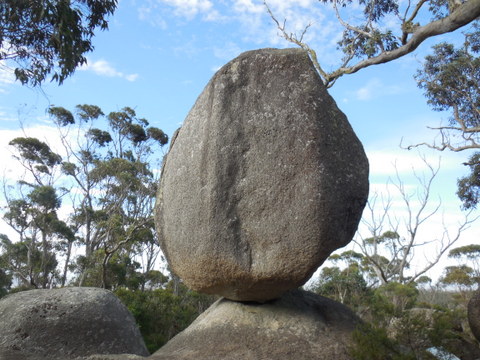 Balancing Rock in the Porongurup Ranges 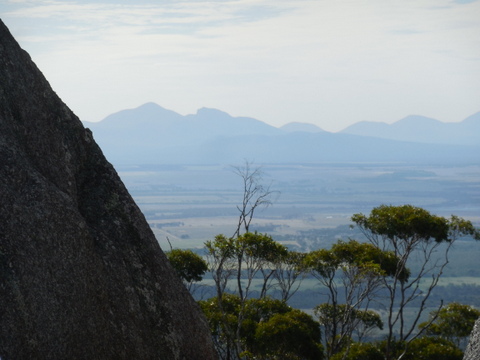 Stirling Ranges in the distance

We reached Hyden after a really wet 300k drive through the wheat belt – a good day for transiting, and an even better day for the farmers.  They don’t get much rain out here and really need a good soak before they can get their winter wheat in the ground.

Just outside of Hyden we visited stopped for the night at Wave Rock – another middle-of-nowhere tourist draw.  Wave Rock is a granite rock that has been eroded into the shape of a wave by some 27 million years of wind, water and chemicals.  It was “discovered” in 1964 and draws a pretty good crowd in these days.  In addition to building the tourist stop, in 1964, the locals of Hyden also build a small retaining wall on top of the rock.  The retaining wall forces rain spilling off the rock to drain all over one side into a reservoir – supplying the town’s water.  The folks who settled the area out here are pretty resourceful – what a great idea to collect rock water. 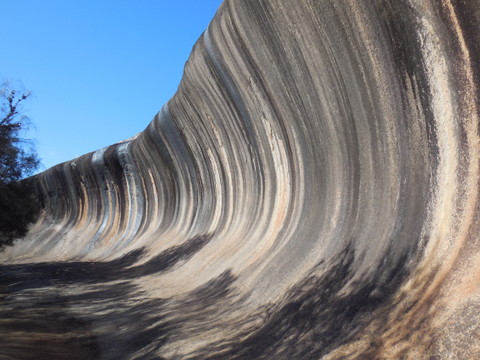 Surfs always up at Wave Rock 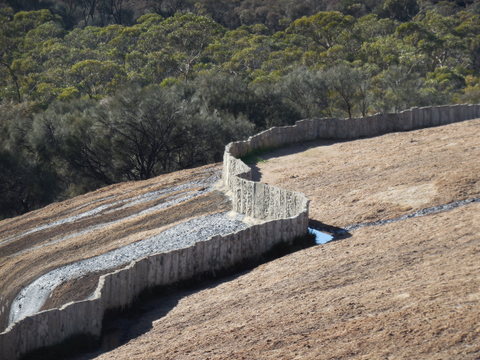 The Great Wall of China – as seen from space – no wait, that’s just the Wave Rock catchment wall, clever.

Tomorrow we leave Hyder and head back to the coast for a brief stop in Esperance.  From there it is on to Norseman and finally onto the famous Nullarbor Plain.  But more on that later.  We’ve been surprised by WA and how beautiful it is.  Who knew that “red dirt Australia” had so many interesting things to see – thanks for coming along with us.