Not all parts of a bicycle tour are fun.  One particularly un-fun part is often the travel getting to the start or from the end of a ride.  We spent the last 36 hours travelling from Ushuaia to Portland, Oregon.  Boy, was it fun. 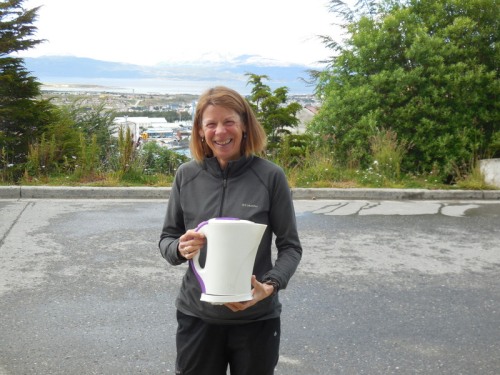 We thought we were flying Aerolines Argentinas from Ushuaia to Buenos Aires.  And we did that, but along the way, we stopped in Trelew, Argentina (yeah, I’d never heard of Trelew before either).  This stop was not listed on our booking or itineraries.  In fact, our trip was billed as 2 stops.  I’m not sure if Trelew was planned all along or things changed after we booked.  Oh well, 2 stops or 3 stops, no harm done.

In all honestly, it would be hard to complain about the Aerolines leg of the journey.  And one big reason for not complaining was that they did not charge us for our bicycles.  And as a bonus, they checked them all the way through to Portland.  That’s at least a couple hundred bucks saved right there.  We are not sure why but what the heck, we’ll take it.

Buenos Aires was a 4 hour layover but we found a bank, waited in the queue and got a good exchange rate on our last pesos.  So that worked out perfect.  The 10-hour flight to Houston was a non-event for me as I slept almost the entire way.  That is after the lovely dinner service was completed.  I’m including a photo of the airplane dinner here just to show you that not all travel meals are as glamorous as the ones we normally photograph and share on this blog. 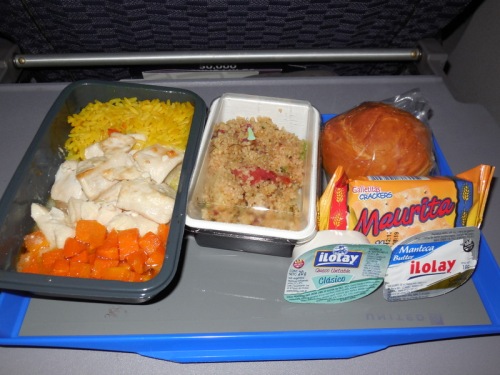 All travel meals are not created equal – posting this one here to give equal time to the below average meals.

We had 4 hour layover in Houston as well.  TSA was fantastic there.  It didn’t seem like they were shorthanded or stressed.  If anything, there were more agents than needed.  As with most international flights to the USA, you have to claim your bags, take it through customs and then re-check them.  In Houston, we discovered that the lovely baggage handlers felt it appropriate to leave our cardboard bike boxes out in the rain.  One was soaked, the other damp.  Both were also a bit banged up but we had tape and re-taped them.

I think a lot of the box damage came from them shoving two bike boxes through the normal luggage conveyor, rather than the oversized one.  I was not overly excited when I later saw the boxes being reloaded on the Portland flight, with the bottom of Nancy’s box opening as it went up the belt into the plane.  Oh great, something else to worry about.

We went to the United lounges in Buenos Aires and Houston.  In the former we had to put toilet paper in a basket.  In the later, it was straight into the toilet.  Welcome home, as the TSA security agents said, after checking our US passports.  No more toilet paper baskets for a while I guess.  The agent didn’t ask where we’d been and we didn’t have to explain having no stamps in the passports reflecting last 20 months – they are all in the Australian passports.

The 5 hour flight from Houston to Portland went without incident.  It’s supposed to rain in Portland all winter but we arrived to sunny skies, and had nice views of the Cascade peaks on the way in.  We were met at the airport by Akemi and Eric (old friends from Nancy’s work), Jan (Nancy’s mum), Gretchen (one of Nancy’s sisters) and Andy (Nancy’s brother).  It was so nice to see all the friendly faces.  It was almost as if we’d never been away. 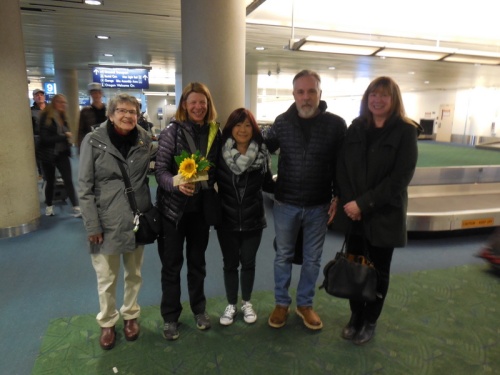 Nancy’s bike box came through the oversized chute in Portland, but it was upside down because the bottom had completely broken out.  Someone, somewhere had tried to retape it with masking tape – now there’s a great idea on a bike box weighing 50 pounds – masking tape, brilliant.  TSA had inspected both boxes as evidenced by their tape on the tops of the boxes.  We have no idea who taped the bottom.  I didn’t pack anything loose in Nancy’s box so everything seems ok – it’s all just a little frustrating to make the effort to pack bikes carefully only for them to be abused by the baggage handlers.  Like I said, the getting to and from a bike ride can be the worst part of trip.

We made it.  And yes, that bike box is upside down.  We had to put it in the cart that way to prevent the bike from falling out.  How exciting!

But anyway, we’re here.  We’re safe.  We made it through customs, immigration, TSA (in the USA) and PSA (in Argentina).  We’ve been X-rayed 3 times.  Sniffed by at least three different dogs.  And had our brand new bag that we bought in Ushuaia torn.  Is riding your bike across the Americas stressful?  Nah, it’s nothing compared to 36 hours in the hands of the airlines and their security partners.

This really will be the last regular post.  It is day 600 and we are really done.  The next couple posts will be spread out of over the next weeks and months.  We’ll do a trip statistical summary and a gear summary.  Until then, we’ll be giving you and your email inboxes a break…  Phew, deep breath, we made it!

This entry was posted in Americas trip, Oregon. Bookmark the permalink.