Here comes another blog post about the weather – ho hum…  So I’ll make the weather update quick.  Today we had rain, headwinds, tailwinds and, are you ready, sunny blue skies!  Yup, all in the same day.  At one point we had bright sunshine and we were riding in the rain.  Patagonia, go figure!  But really, the blue skies came at the end of the day as we reached Coyhaique and made for a fantastic finish of the day, and the first half of the Carretera Austral.  As the skies cleared, the mountains came out to play and the sun shone brightly.  This evening, there is hardly a cloud in the sky.  Woohoo – what fun!

We started the day to broken clouds but didn’t wear our rain paints and booties today – hope springs eternal.  We were the first ones up at camp and pretty much heading down the road while the others slept or were just getting brekkie started.  It takes all kinds to make a proper rolling cycling troop. 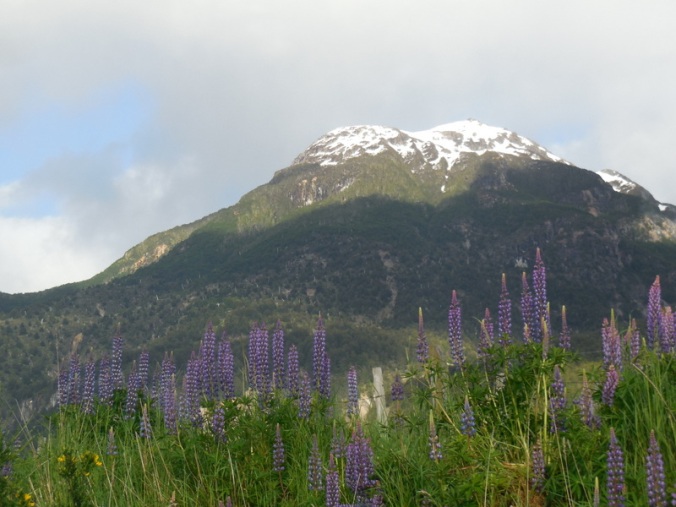 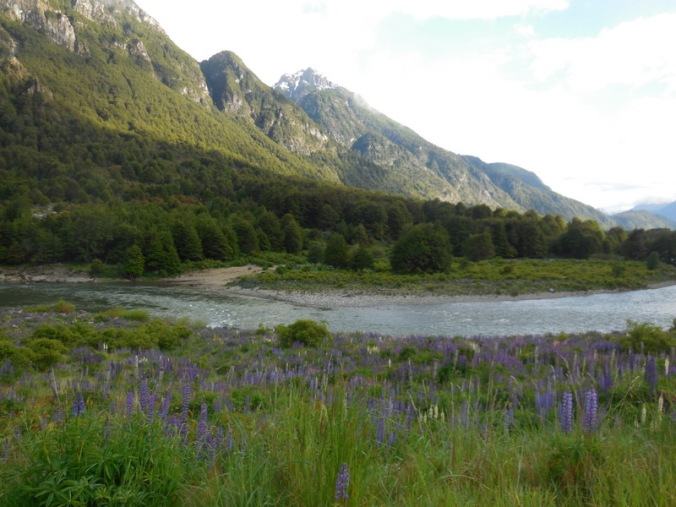 The first half the day we headed mostly southwest down the Rio Manihuales, towards Puerto Aysen and the sea.  The wind was coming off the sea and up the canyon that we were trying to ride down.  The canyon blocked the wind all but for a few times when we were almost blown to a stop going downhill.  There was a 23k-shorter option that we could have followed, heading inland, but it wasn’t sealed so we decided to head to the coast.  We’ll never know if the other way was good or bad but later in the day as we zipped up the Rio Simpson away from the coast, we were happy for the tailwind.

There was even more lupine today than yesterday and as such, I was convinced that it was an invasive pest.  To my surprise, when I looked it up this afternoon, I learned that it is native to this part of the world and just part of the natural environment.  There is recorded history of the Inca eating lupine seeds by boiling them to remove a natural bitter taste.  I was thinking invasive because the scenery (and weather) today reminded both of us of the south island of New Zealand.  That part of NZ is dealing with lupine as an introduced pest that is costing a lot to eradicate.  You can see why lupine grows so well there given the weather similarities to its homeland in Patagonia.

We reached a hard left turn where the road to the right went to the sea and the road to the left went up the Rio Simpson and to Coyhaique.  We stopped for morning tea at the corner, where Nancy posed for a photo with the lupine – she is very photogenic in purple.  We were very happy to turn left and head to Coyhaique, even though it was more or less uphill – as that’s the way the wind was blowing.  There were few nice waterfalls in the narrow gorge carved by the river – Cascadas de la Virgin being particularly nice and right on the highway. 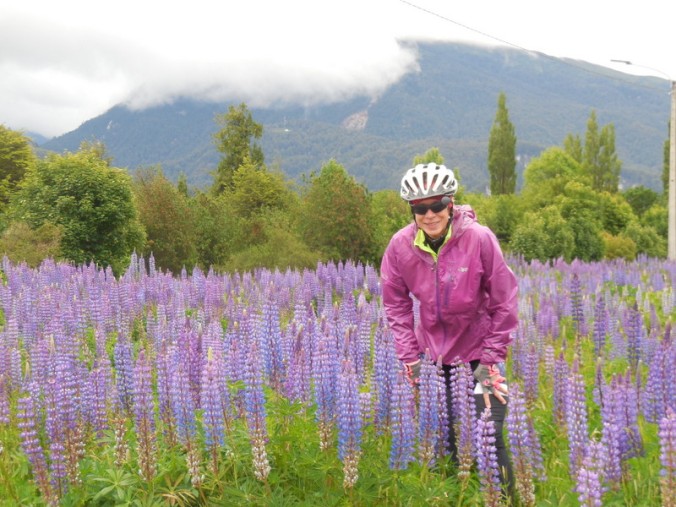 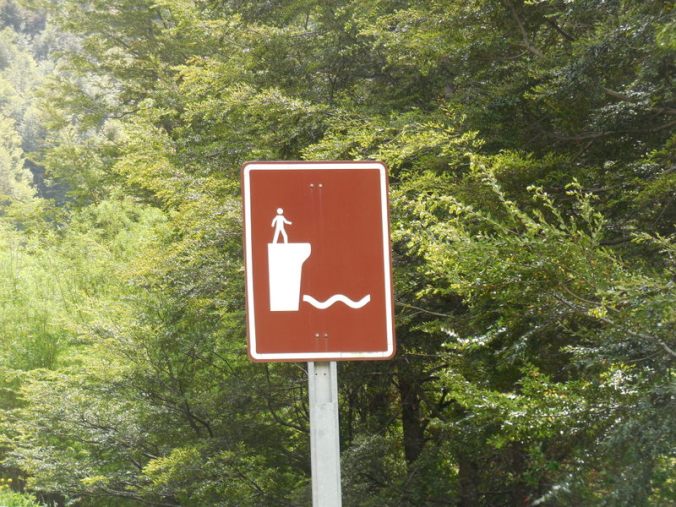 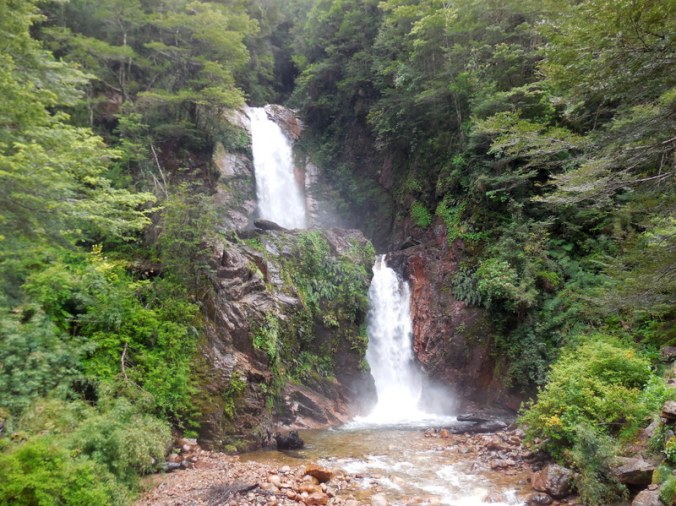 In the lower section of the canyon we had a light rain.  We could see sunshine ahead but it was just out of reach for at least 10k.  Just about the time we reached the end of the canyon and the only major climb of the day, we hit the sun.  While we were riding in the sun, the wind that was whipping up behind us blew the rain that was falling behind us right on top of us.  You had to laugh – after the past week and all the rain we’ve seen, to have it fall on us now in bright sunshine – haha, good one Mother Nature.

The climb was steep but we got ahead of the rain and rode up in sun.  The surrounding mountains started to pop out from behind the clouds – so the views more than made up for the effort.  Nancy was smart to take off her windbreaker before the climb.  I wasn’t as smart and was sweating up a storm and had to stop to remove a layer.  Nancy waited for me at the top of the climb at a great old transit bus that had been converted into a restaurant.  We stopped and had a couple hot empanadas, right off the top of the wood stove – yum. 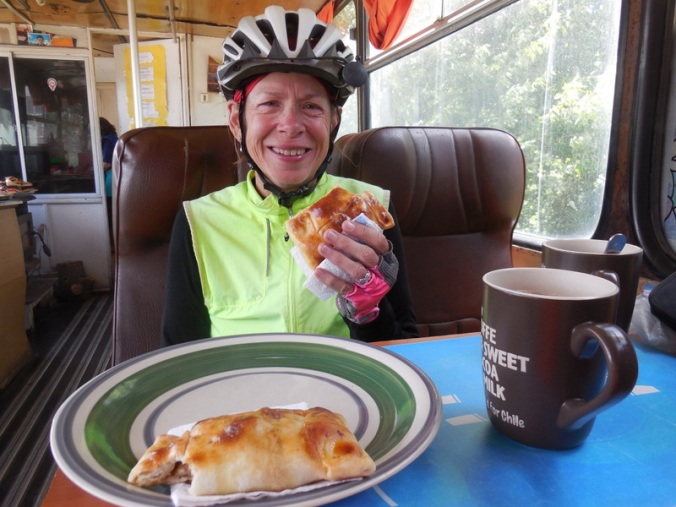 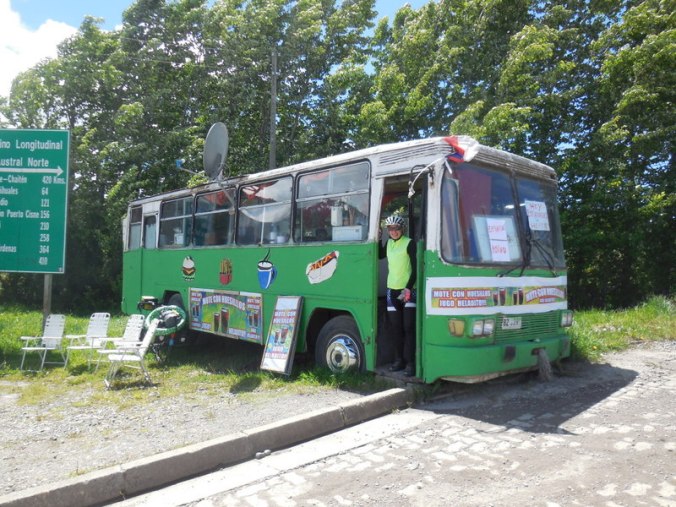 It was only 10k to town and by now we had more or less full on blue skies.  The mountains around Coyhaique are stunning and we could see them all.  After the last week, wow, what a treat.  I may have pushed the limits a little here taking pictures but it was just so nice.  Eventually, we made our way to town and found our AirB&B.  We are only a couple blocks from town, a big grocery store and have found a laundromat.  And we’ve booked in for a 3rd night as well.  There is some temptation to ride tomorrow as more sun is forecast but the long-range forecast looks pretty good as well.  We need a break to resupply and validate our timing for the route ahead. 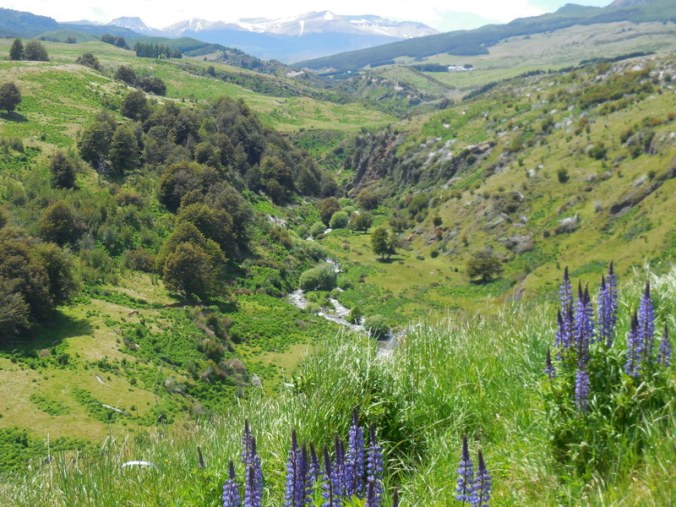 Looking up the canyon towards the sunshine 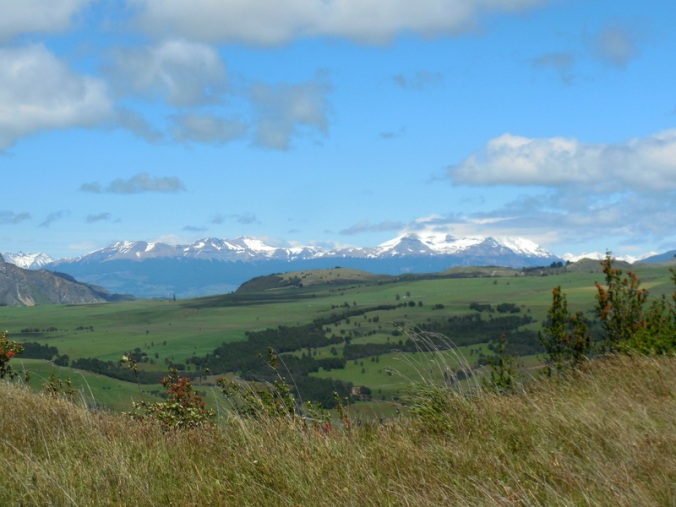 The mountains south of Coyhaique 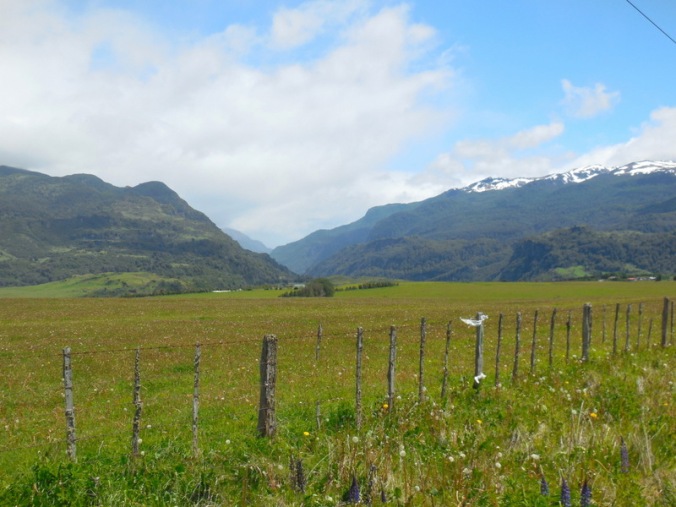 Looking back to the sea, and the rain

Five wind turbines at the top of the hill, they would get a great workout here

Looking down on Coyhaique

So, we’ll be here for the next two days and provide some sort of Coyhaique update in that time.  For now, we are settling in, eating, sleeping in and generally recharging our batteries.  Life is good.

Coyhaique – we made it 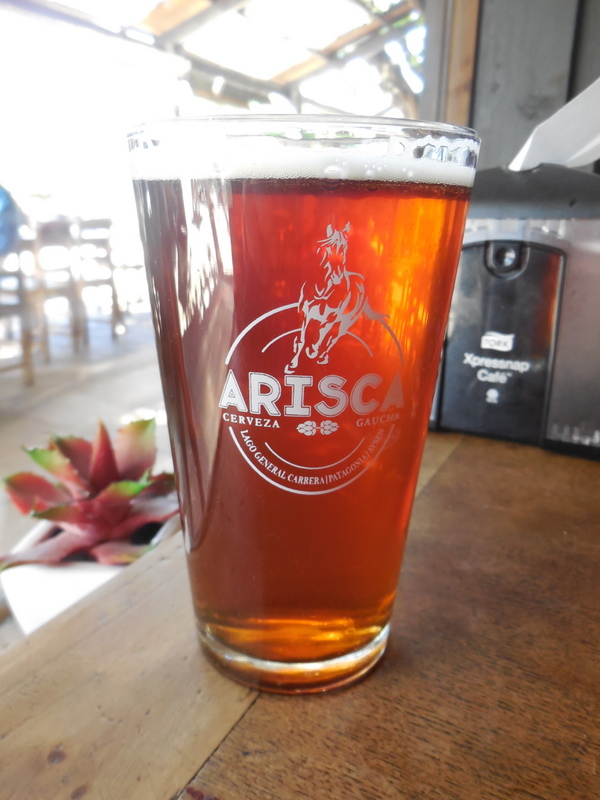 A local ale to help replenish the carbs, yup, that’s it…