The other day we were debating if having rain in first 5k or the last 5k of a ride was worse.  General consensuses concluded that the first 5k was worse, as more than likely, you’d probably just bag the ride anyway.  The last 5k is not fun as you arrive wet, but by that point, you are committed to finishing the ride.

Well, today, we had rain in the first 5k – but delayed the start until it finished.  Then we had more rain in about the middle 5k of the ride.  So, now our simple “beginning or ending rain” question becomes a multiple choice question.  Which is worse?

While you contemplate your answers, with a natural leaning towards option number 4, consider the following.  First, “10K Nancy” rode in the rain today and uttered not a single complaint.  Second, just before the rain started, we rode over some really wet roads and also passed “Adrian the skateboarder”.  Adrian’s feet and pants were soaked and he was smiling as broadly as ever.  Making matters worse for Adrian, right after the rain started, we encountered a 15k section of dirt roads as well.

Choose your answer now – be brave! 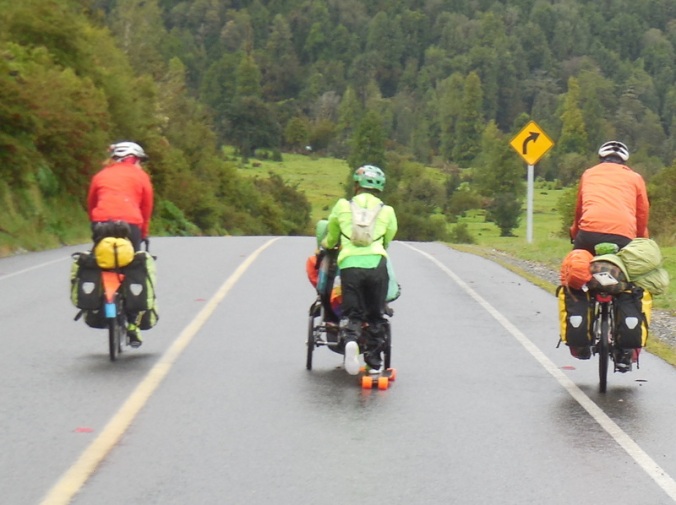 10k Nancy, Adrian the Skateboarder and a German (we think) riding with Adrian

As noted, our start was delayed this morning by about 15 minutes, to let a brief shower pass.  We still managed to be on the road by 8:15.  We had a few small patches of blue just as we started but that would be it for the day.  The ride was very straightforward.  We rode up a valley to Lago Risopatron, to the end of the lake (18k), then through a small pass and down to sea level at the Puyuhuapi Fjord. 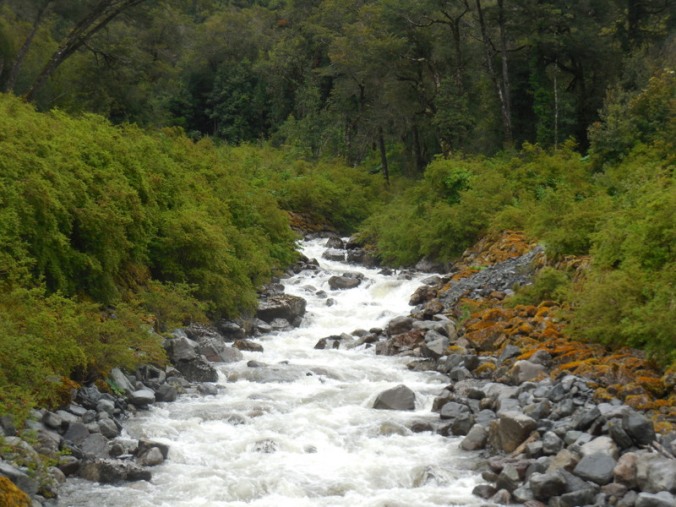 A raging creek – with rocks on the edge – how is it possible that any stream bed has room for more water after all that rain??? 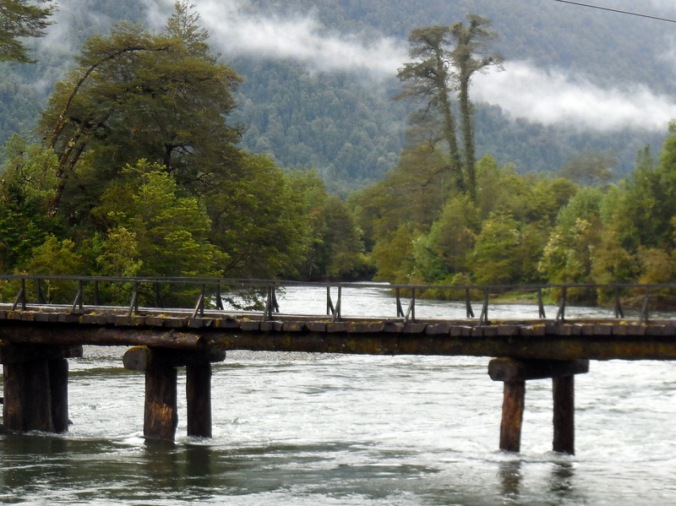 A full river and an old bridge over it 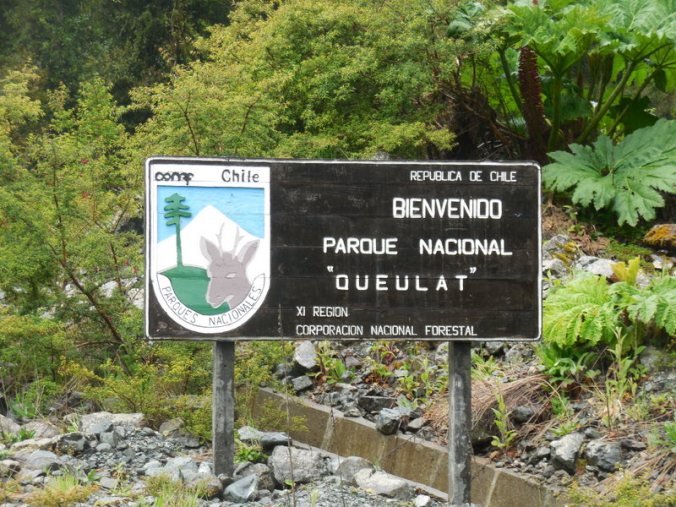 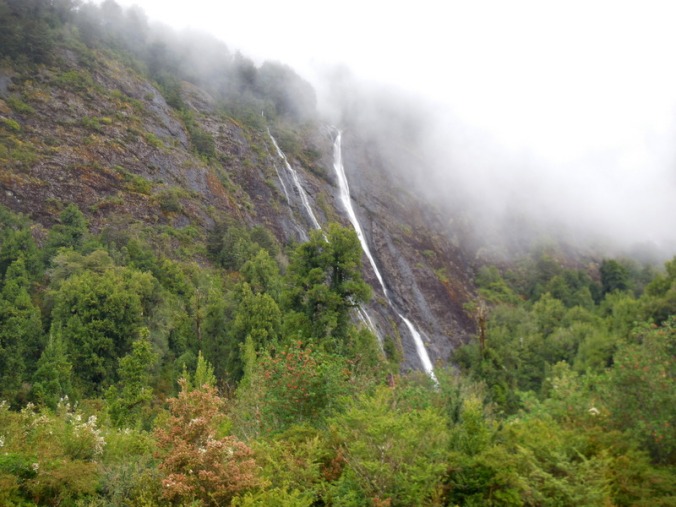 The valley was lined the entire way on both sides by snow capped peaks.  We only got brief glimpses of them from time to time.  Near the lake we could see where the snow line had been for the storm we had yesterday.  It didn’t look all that high but it was well above the lake.  We stopped at the tourist information centre in Puyuhuapi and learned that the road ahead was closed yesterday but is all open and that the snow line is above the 1,500 foot pass we have to ride over tomorrow. 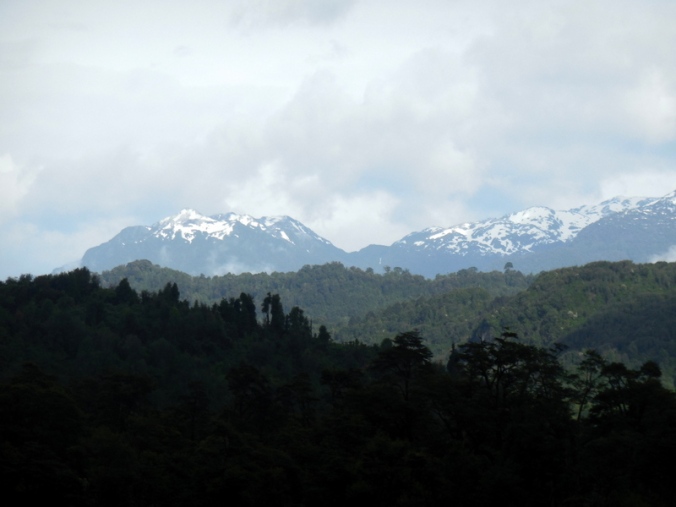 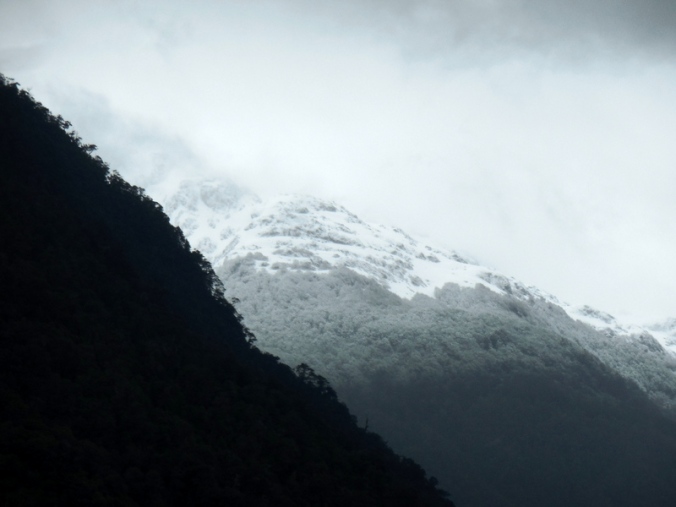 The frost snow line from overnight – I thought it was summer here!

Almost since the start of the CA, we’ve had day after day of wild fuchsia flowers lining the roadside.  Nancy’s Mum likes to grow fuchsia and is always getting starts in the Oregon spring.  Seeing all the flowers today reminded us of both of our mothers (and our families in general).  Happy Thanksgiving everyone in the “Ertel-Peterson” extended families – have a piece of pie (or two) for us! 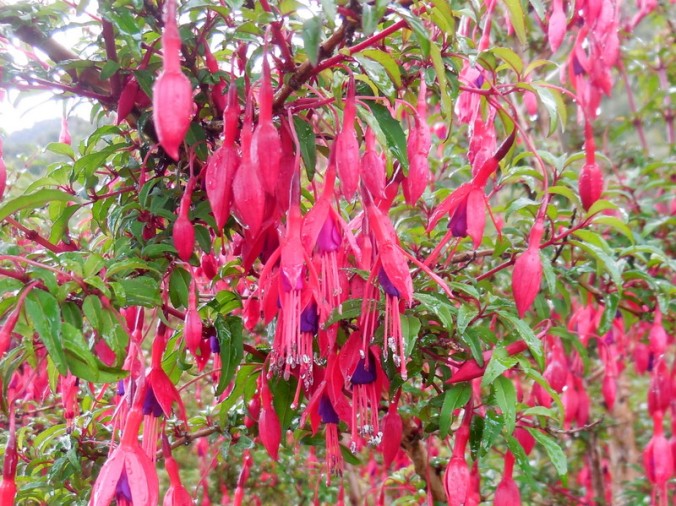 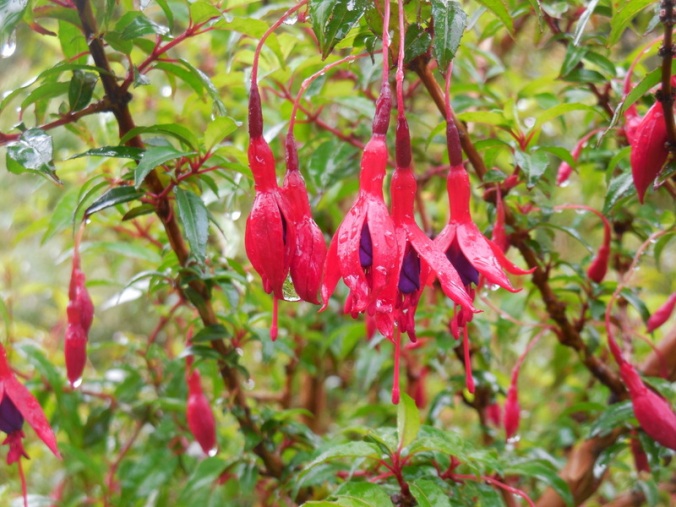 Puyuhuapi is a funny little town.  It is right on the fjord and surrounded by Parque Nacional Queulat.  As such, it has a big focus on tourism.  Today it would seem that every other building has a hostel or cabana sign.  It wasn’t always this way however… 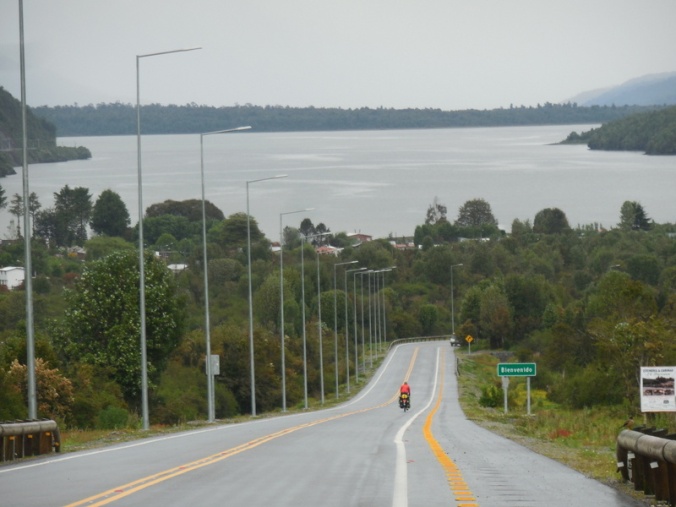 The ride down into Puyuhuapi

The town was founded in 1935.  A group of Germans living in the Czech Republic, because they had fled the politics of 1930s Germany, decided to look further afield for a better life.  A number of the menfolk came over to look at land being offered for free by the Chilean government (to encourage settlement).  The men liked what they saw and decided to move their full extended families here.  Many of the folks coming were delayed by the outbreak of WWII but eventually by 1947 nearly everyone who planned on come had made the voyage. 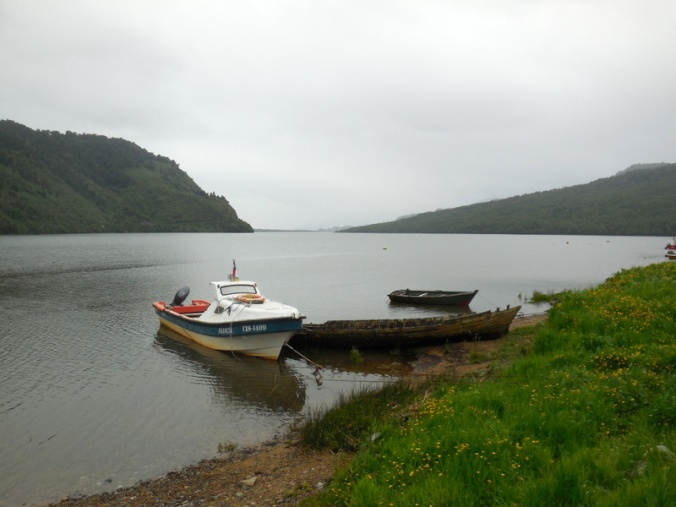 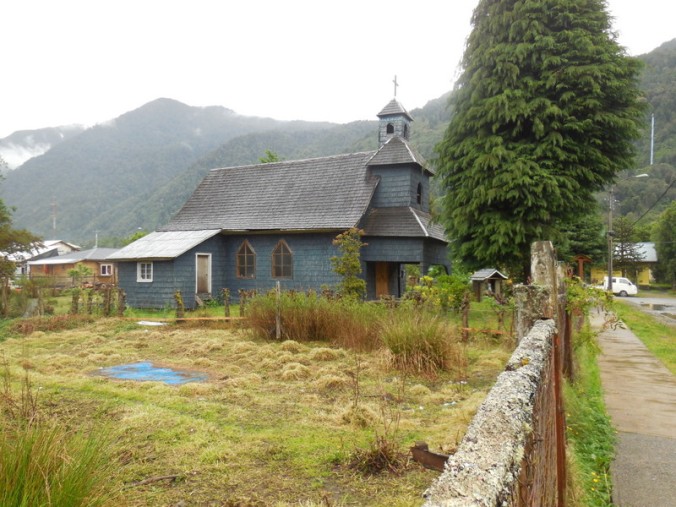 There was no road or air access – all supplies had to come in from the sea.  In reality, the town that was established had to get by with what they could grow, shoot or catch.  But they were industrious – moving quickly from tents to log cabins and houses that they made themselves.  One of their very first projects was to build a water wheel to give them power to mill logs and lumber.  They were a clever bunch for sure – as failure may have been fatal, they had to be.

Some of the original settlers lived well into this century – and many of their children, grandchildren and beyond, still live here.  It’s quirky town, one where you don’t want to assume where someone is from simply based on how they look.  So far it would seem that everyone speaks Spanish, though I’m sure that if we spoke German, we’d find a few folks to talk to.

We debated riding further today but we were wet stopped in town to check the state of the road past here.  There were reports of two washouts and riding further might have resulted in having to turn back.  We stopped at the visitor information centre and were told that we could get through – but they were working on the road.  At that point, we’d stopped pedalling and decided to just call it a day – it is Thanksgiving Day, after all.

The info centre recommended a nice little hostel to us called Hostal Augusto Grosse (named after one of the town founders).  It is very small, with only 3 rooms and beds for 8 people.  The main room is tiny but it has a wood stove – and that is just about cooking us out this afternoon.  The hostel manager was happy to get the fire going when we arrived – helping close the deal on us stopping.  Our room is very small, but we are snug and happy, and warm and DRY.  We treated ourselves to lunch out so are now full, hot and sleepy – just like you should be on Thanksgiving Day. 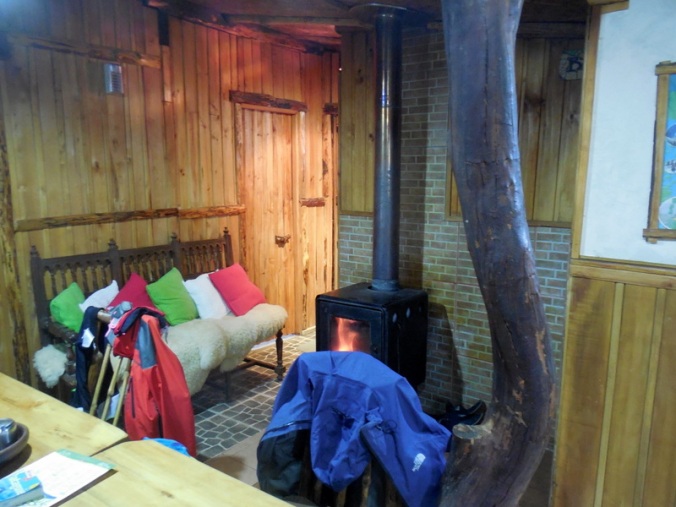 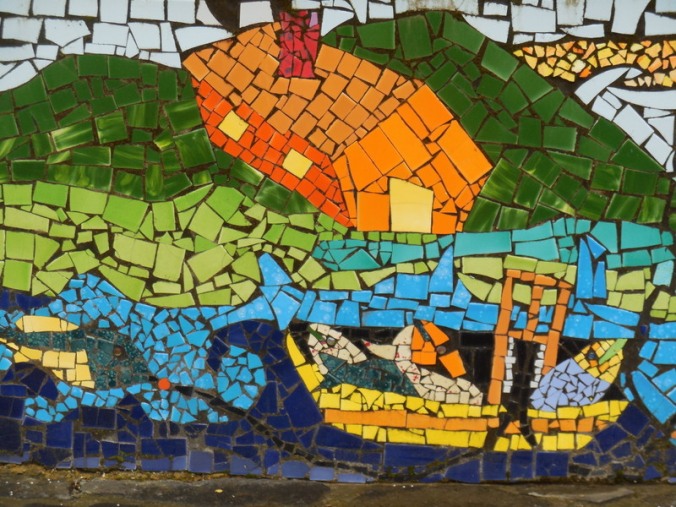 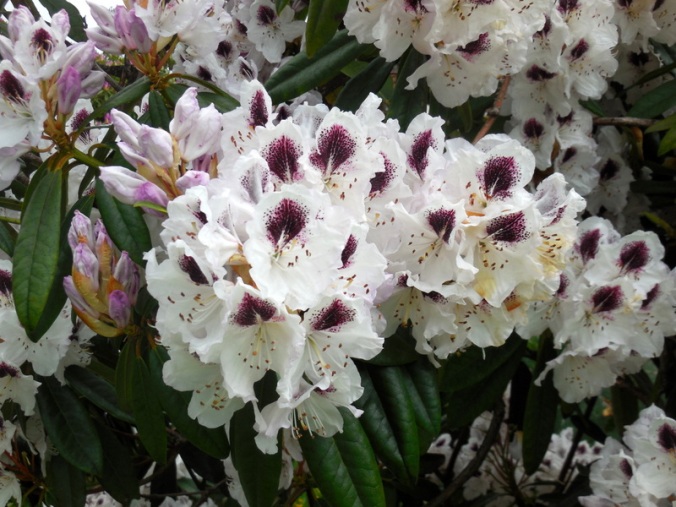 The forecast for the next couple days is nearly rain-free.  We are super excited about riding tomorrow and actually seeing some of the valley-side mountains.  We have a little longer day planned, with a big climb in the middle.  Wow, to think, doing any or all of it in the sunshine (or at least no rain) – how exciting!