Today’s forecast was spot on and we loved it – blue skies in the morning, a few clouds and then more blue later in the day.  Repeat this to the bottom and we’ll be happy campers.

We slept well in our tiny room, nice and cosy.  The owner’s dogs hung out under the cabanas (they are on stilts – the cabanas, not the dogs) but the dogs settled early on and we didn’t hear a sound overnight.  Other than the rain that is.  Ah, the soothing sound of rain on a metal roof when you are going for a bike ride in the morning.  Not to worry though, the sun was out in the morning.  We enjoyed a very nice brekkie at the hostel before hitting the road about 8:15.

Nice house early in the morning, just to show off the blue sky

We were climbing right away and pretty much for the first 10k. There were some steep grades early, and then it mellowed a little until we reach the first 8k of road construction.  Here the road was super steep, single lane and loose, wet gravel.  We rode up most of it until a group of cars came up behind us honking for us to get out of their way.  We stopped and pulled over – and there was only just enough room for them to squeeze past.  From here Nancy had to walk because it was too steep to get going again.  I remounted, somehow, and grunted to the top.

We had two sections of dirt road works today, one 8k and one 10k.  Mostly the surface was great, hard park and fast.  About 10% of the time it was potholed and about 10% time it was muddy.  We had one section that was not rideable – a complete lake.  We renamed the road the good, bad, ugly and the really ugly. 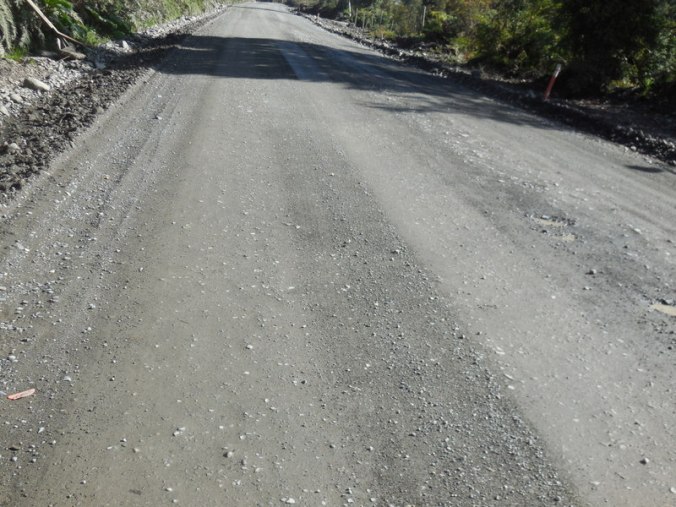 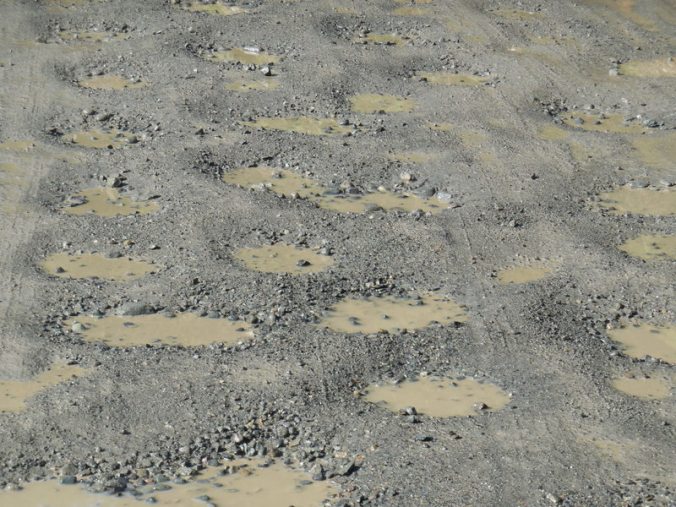 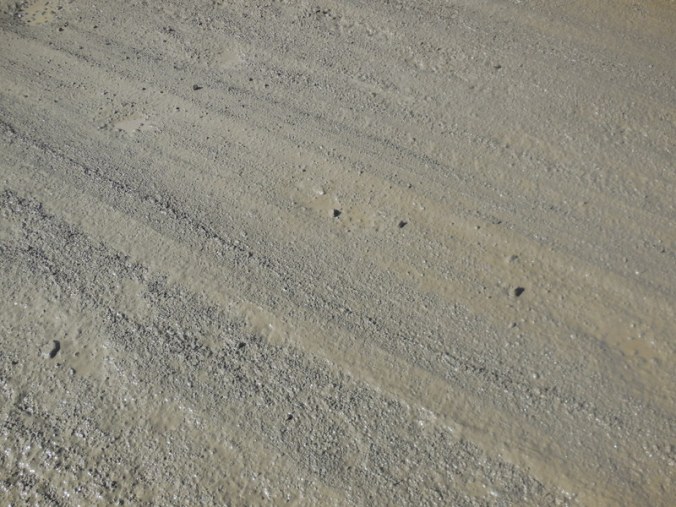 The ugly dirt road – this stuff gets everywhere

In the really ugly section, I tried to ride through and made it about 3/4s of the way before a rock took out my front wheel and I dismounted, almost landing on my side.  I had to put both of my feet down in 5 inch deep water.  With already wet feet, I just waded across the rest pushing.  Nancy tried to stay out of the water, pushing around the side.  She got her feet stuck in the mud and the bike stuck in the water.  I did the chivalrous thing and walked back through the water to push her bike across – ok, I had wet feet already, I’m not sure how chivalrous I was really being.  Nancy walked across the mud and her feet were probably dirtier than mine.  That was the “fun” part of the day!

Feet straight from the socks later in the day, covered in dirt – nice

From the water crossing, we had more dirt but the surface stayed mostly good.  There was another section of one lane where we got yelled at for riding in the left tire track by one of the flaggers.  It didn’t matter as riding in either track we blocked traffic in both directions and there was no traffic.  I guess she was just bored out in the middle of nowhere guarding a road from crazy cyclists – phew, thanks for that! 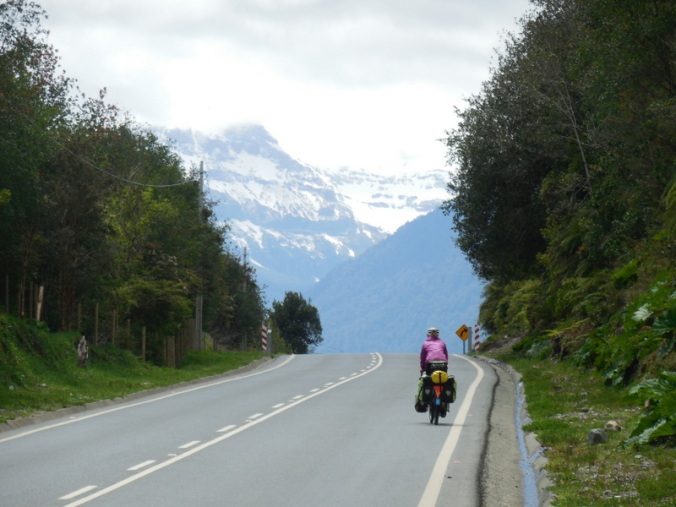 We had more up and down, and more unsealed roads until about 15k to go.  From there it was smooth asphalt the rest of the way.  We spotted a gently flowing drainage ditch where we stopped and washed the big chucks of mud off the bikes and cleaned our shoes.  It is always a worry showing up at a hostel looking too much like someone who has been rolling in mud puddles.

We rolled into town about 12:30 – a surprisingly long day for such a short distance.  We are not 100% with our colds but we may need to look at some of the longer days we have planned.  Road construction and steep hills really slows us down. 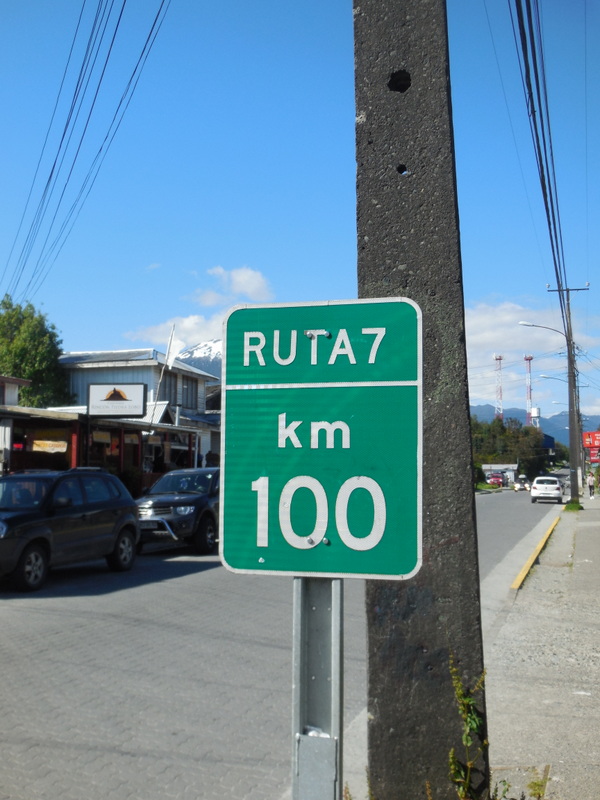 We passed 100k of the CA today

We had read about the Quilda Hostal on the net.  They are supposed to be bike friendly so we decided to check them out – hoping they wouldn’t mind our remaining mud.  They didn’t even notice.  Plus they have a bicycle repair stand and tools.

After showers and eating the lunch that we made this morning we took a stroll to the ferry office and to have a look around the harbour here.  Tomorrow we had a 4.5 hour ferry ride and needed to buy the tickets in advance.  Ruta 7 dead-ends here, at the ferry.  The waterfront area of town is beautiful – think snow capped mountains, a gorgeous blue fjord and lots of fishing boats rest on their sides waiting for the tide to come in.  It reminds us a lot of our trip to Sweden with Nancy’s sisters a few years back. 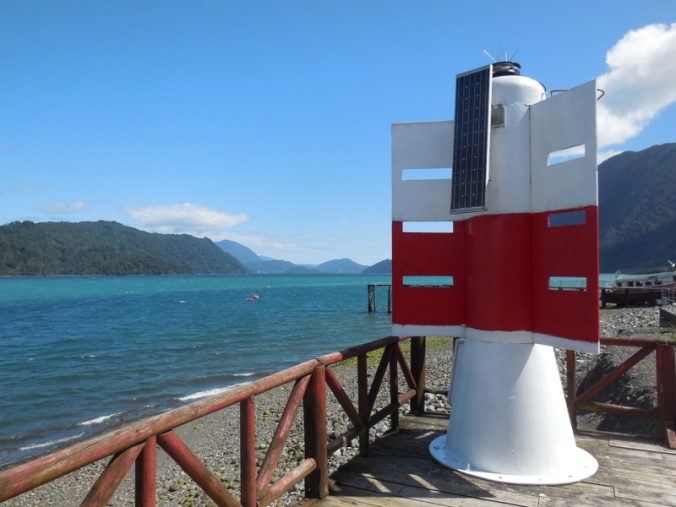 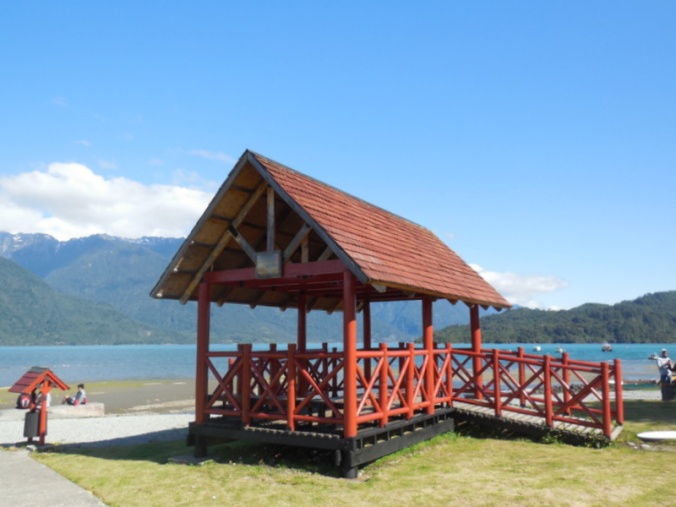 Hornopirén monument to the mariners 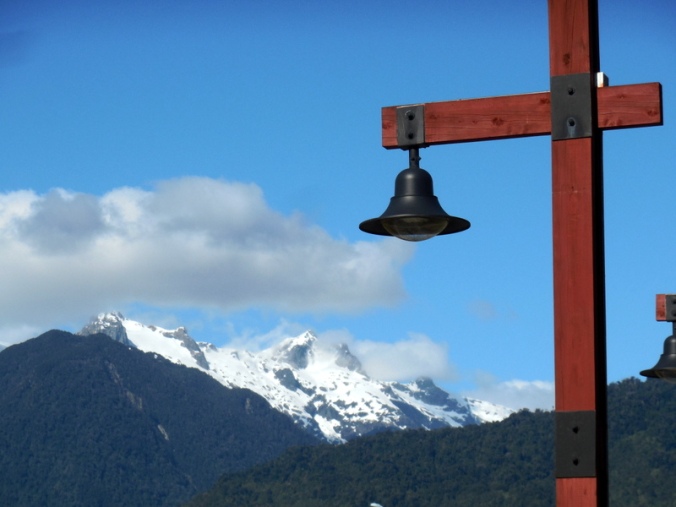 From the main square 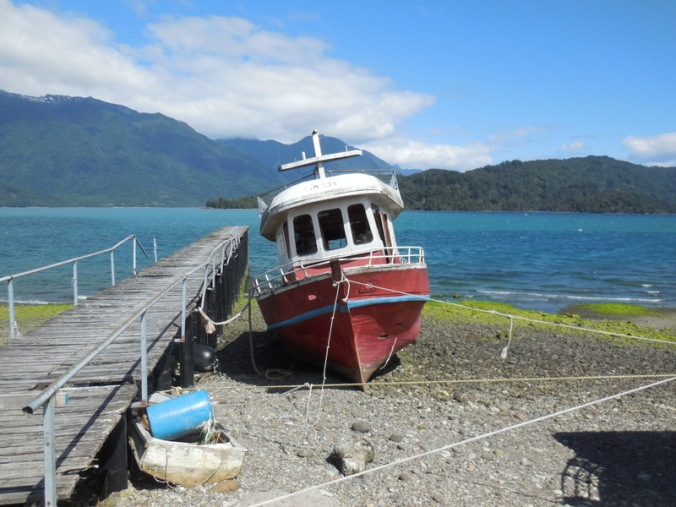 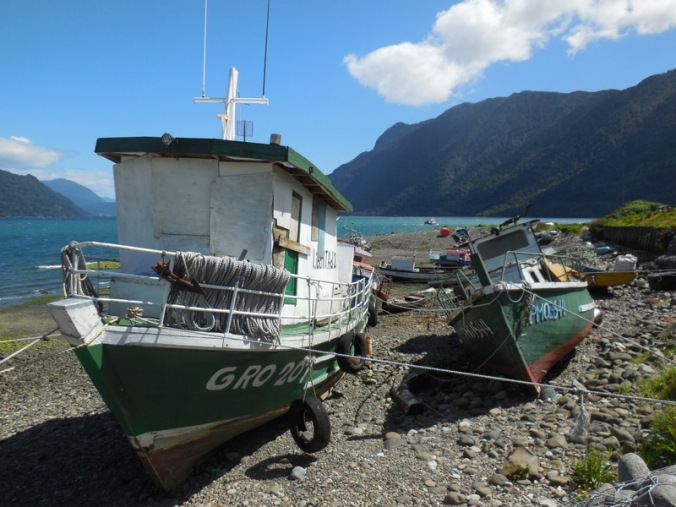 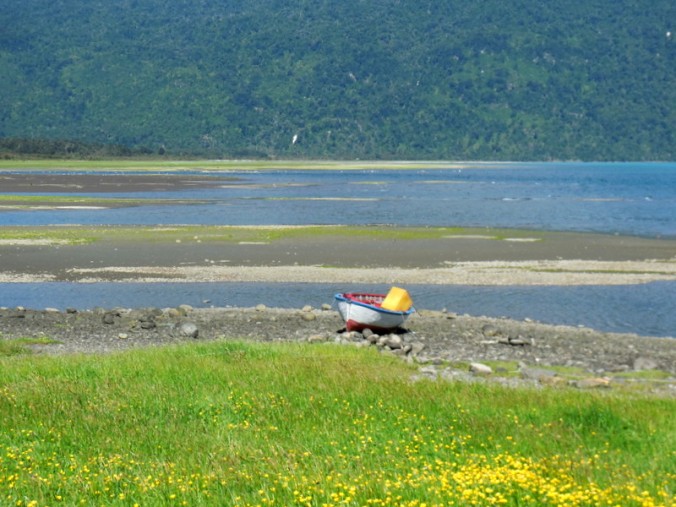 Up river with the wild flowers

We managed to find a harbour side restaurant that was open in the late afternoon and I got a delicious bowl of seafood soup – mostly mussels and some nice salty broth.   It was too early for dinner but the temptation too high to resist.  While it has been sunny all afternoon, there is a strong, cold wind blowing up the fjord.  I’m not sure that it gets overly hot here.

Tomorrow we have to ride about 14k in total but we’ll still cover some ground.  The ferry jumps us past a number of uninhabited headlands, dropping us about 13k from a campsite that Philipp and Tine told us about.  The ferry departs at 9AM – Nancy is forming her “anti-seasick” strategy as I type this entry.  Forecast is for no rain and light winds, so the sail should be great – I hear that this ferry even has an inside cabin.

We may not get a post out tomorrow as the campsite is pretty remote.  If not, we’ll post again from Chaiten in two days time.