Last night the owner of the hostel came by our room to ask us what time we wanted breakfast, as it was included with the room rate.  When Dave suggested 7:30, the host commented that that was very early, but after hesitating a moment he agreed to the time.  And, true to his word, he arrived to prepare breakfast for us right on 7:30.  Nothing fancy, toast, jam, cheese and ham slices, and the ever present instant coffee – pretty standard breakfast down here.  Thank goodness we finished up our Cheerios cereal before our hostel breakfast!

Actually the host was very nice and talked with us while we ate breakfast.  He was telling us (we think) a bit about water resources in the area, how the rainfall and groundwater is impacted by non-native tree species, and some other things that we weren’t quite getting.  Maybe someday our Spanish will be good enough to get all of the things that people try to tell us! 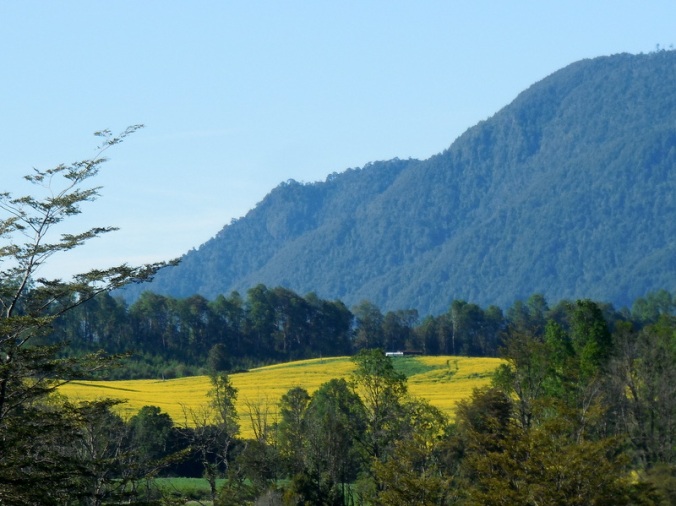 Another old wood church near town

We had a lovely sunny morning leaving Panguipulli, riding through farmlands under blue skies.  We ran into Adrian again about 10k or so out of Paguipulli – he camped down on the lakeshore last night.  It’s pretty amazing that he skates and pushed his cart each day as far as we ride our bikes.  We waited for him at the top of a little hill and after a chat we watched him skate off down the other side.  The wheels on his cart are fixed and his only brake is on the front wheel of his cart so after having to walk and push uphill he has to be really careful and slow going downhill – none of that great feeling of freewheeling down the hill that you get on a bike.  We are feeling pretty soft compared to his efforts! 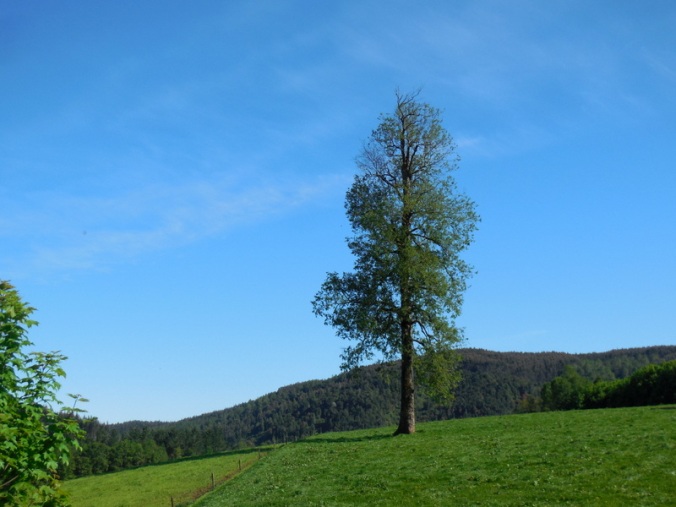 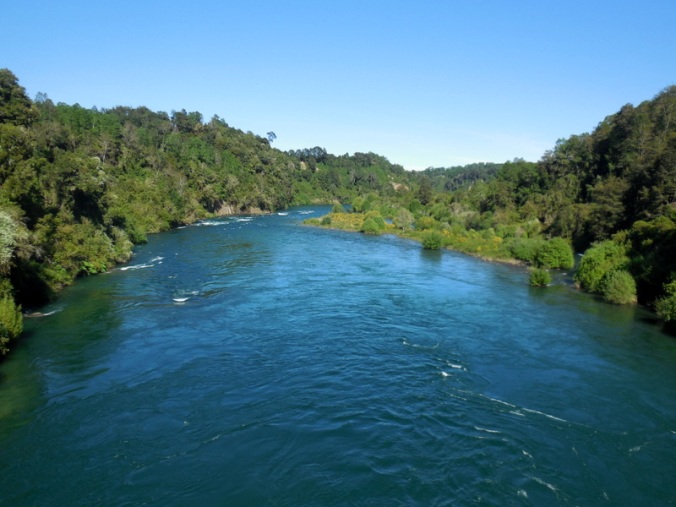 The rivers are pretty full here with rain and spring runoff 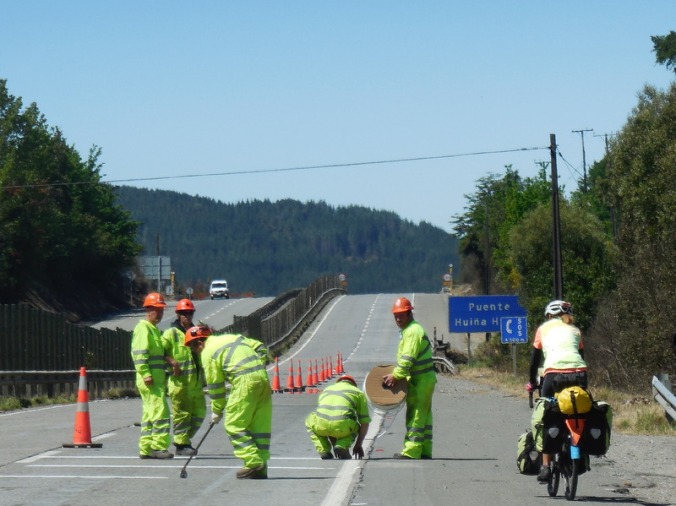 Dave was finally lucky today in his efforts to get a Chile license plate.  After riding through the farmlands we made our way back to Ruta 5.  Not long after we got back on the highway there was a nice clean license plate sitting right there on the verge of the highway.  So, now if he keeps complaining about how heavy his bags are you know why – they are getting full of the license plates he keeps picking up.  (Junior editor’s note:  for the record, I have one Argentina and one Chile plate.  They are aluminium and very light.  I will not be picking up anymore, unless…) 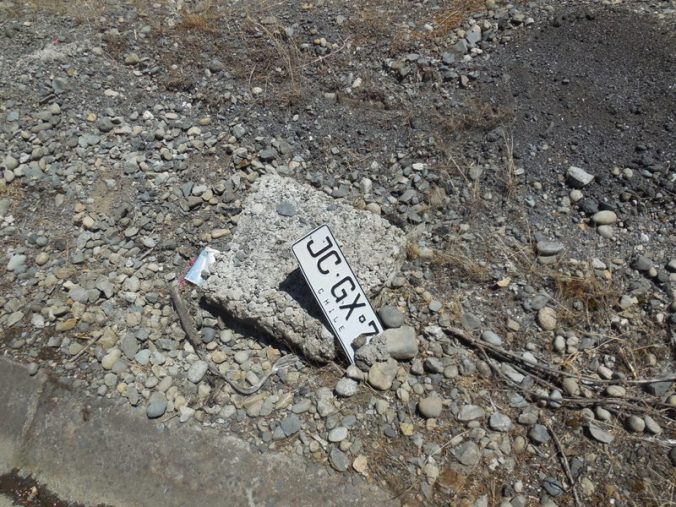 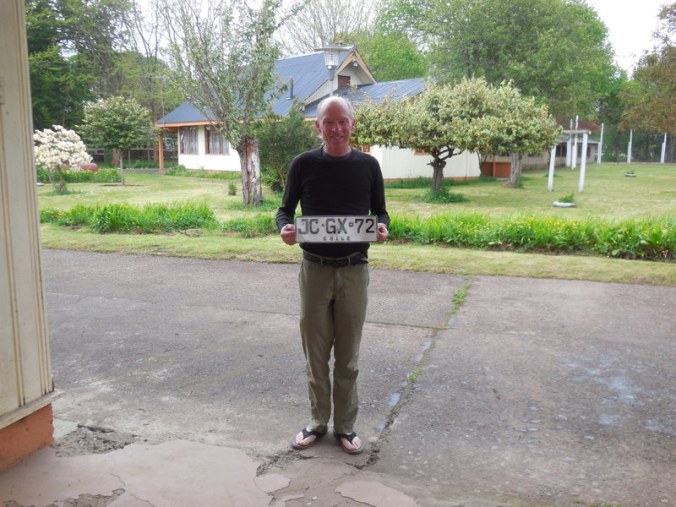 Posing with his prize

Today ended up to be a bit longer than we intended it to be and for a while there we thought we were going to have another double day.  Our intended destination was the little town of Paillaco, which would have given us just around 80k for the day.  We arrived in town just before 2pm and made our way to the Hotel Paillaco, where unfortunately we found out that they had no rooms available.  Google maps showed two other places in the small town – one seemed to no longer exist and the other was a half-finished place behind high concrete walls.

Puppy from first hotel wanted us to stay, please

Hotel three – not staying there…

We really wanted to go here for dinner but this place was in the town where there was no room…  Oh well, I still liked the name, Restobeer.

Hmmm, what to do?  Well, the only thing to do was to keep riding and see what we could find.  It was about 60k to Osorno, where we had booked an AirBnb for a couple of days from tomorrow night.  We didn’t know if we could extend the booking but we knew there were lots of accommodation options in Osorno if we made it there.  At that point the sun was still shining though we could see some clouds ahead and knew that rain was forecast for Osorno.

Under normal circumstances given the distance we would have probably just committed to make it to Osorno and gone for it.  But Dave is battling a cold and he was feeling pretty worn out at that point.  I was keeping my eye on him as he croaked out ‘Car back’ from time to time.  We were making a pretty good pace when we decided to pull over at a gas station to get something to drink.

Lino clothes sales, restaurant, cabanas and more – how could one drive by without stopping.

Well, lo and behold right near the gas station there was a nice restaurant and a sign that said ‘Cabañas’.  Dave had had enough by that point so after a bit of wandering around to find someone we have ended up with a little cabana with a kitchen and even cable TV.  We had a great meal at the restaurant and are now snug in our cabin (with 4 single beds!) as the rain is coming down. 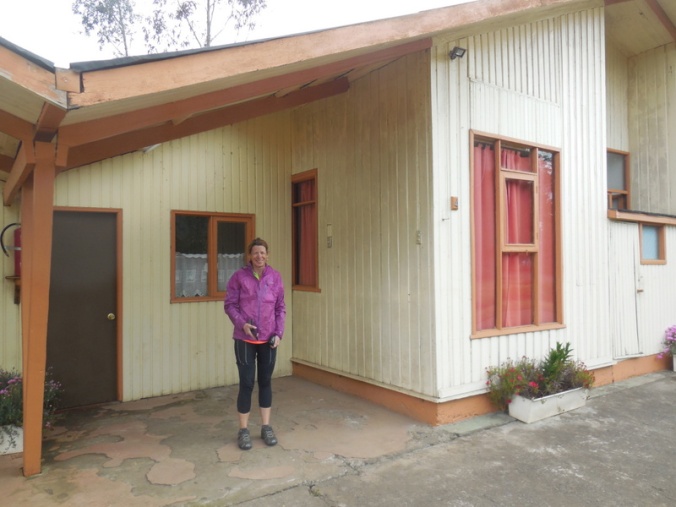 Dave is drinking loads of water so hopefully he will feel better in the morning after a good sleep – I doubt there will be much noise here as we are in the middle of nowhere!  We only have about 30k to get into Osorno so it rains like it is forecast too at least we don’t have a long ride and we know we have a nice place where we can warm up and dry out.