Back on January 3rd of this year, we took the ferry from La Paz, Baja, Mexico to Mazatlan.  While standing in the dinner queue on the ferry, I met a guy named Adrian Oh who was riding a skateboard from Vancouver, Canada to Ushuaia (yes, a skateboard).  We hadn’t seen Adrian since the ferry docked on January 4th.  He is pretty active in a Facebook group that we follow so we knew that he was still out pushing but we were not really expecting to run into him.

So, this morning, as we headed up Ruta 199 towards Villarrica when we saw a person stopped at what looked like a child pram, we didn’t give it much thought.  As we got closer however, it was clear that the person pushing was wearing a bicycle helmet and in fact, they had a skateboard.  Then the penny dropped – it was Adrian.  We stopped for a catch-up and shared amazement that we’d actually run into each other again.

This morning we had a bit of traffic getting out of Temuco.  It was fairly early and I can only imagine it would have been a nightmare later.  Temuco was a lot bigger than we imagined – it has a population of more than a quarter million people.  We rode the first 28k on Ruta 5 before turning off at Ruta 199.  The sky was a stunning blue, nice clean air from all the rain and not a cloud in the sky – in fact, no clouds all day – gorgeous.

After chatting with Adrian we headed off up 199, leaving him pushing behind us.  He’s probably pretty quick on the downhills, but on the slight uphills, bikes are faster – but not too much faster.  We stopped for lunch about 20k later and were only just finishing up our feed when up pushed Adrian.  He may not be super fast, but he just keeps going.  In case you were wondering, he pushes 6 times on one leg, then switches and pushes 6 times on the other leg. 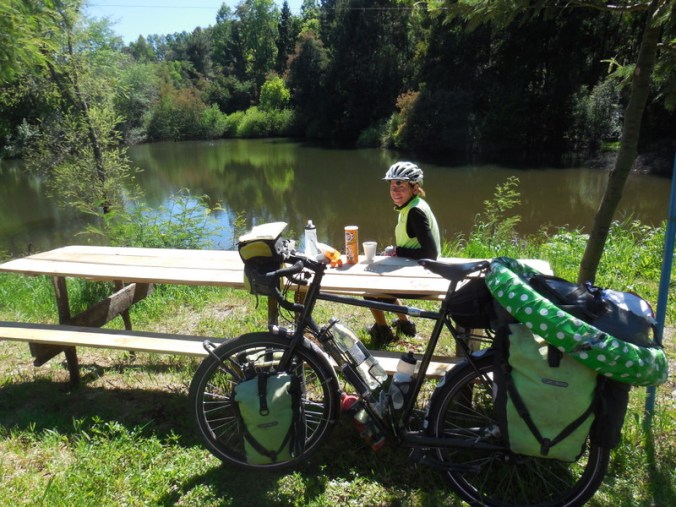 Shout out to Inge and Pete COSTA

Soon after getting on Ruta 199, we started seeing views of the three volcanos that you can see going this way on a clear day.  As we were heading for Villarrica, it became the main one coming into and going out of view as we crested hills and rounded corners.  I’m sure that both of us took too many pictures as it really doesn’t change with every hill and corner but what the heck, stopping and taking in the whole view is worth it, with or without a camera in your hand. 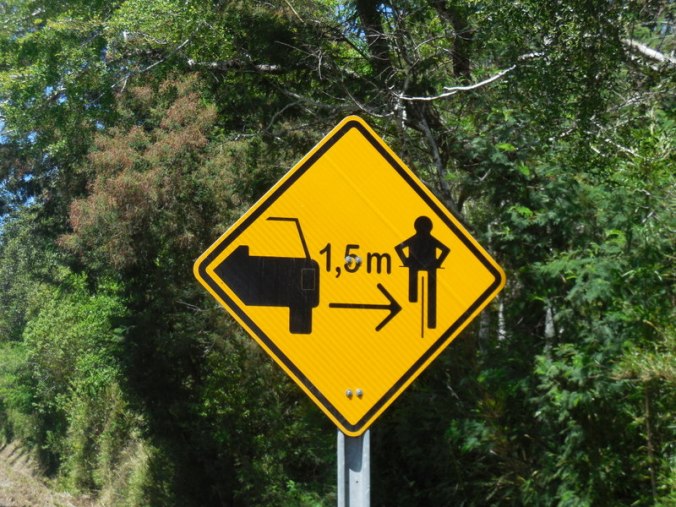 Great idea – but the bike tires are a wee bit thin

One of many Villarrica photos

We had a slight uphill and slight headwind for the entire day – we kind of felt like we were bogging all day.  But, like Adrian, you just have to keep pedalling.  We finally arrived in Villarrica about 2PM.  We wanted to get something to eat but ended up doing the hotel search instead.  I went in a handful of cabanas before we settled on the Om House, right on the lake shore.  It is over budget but the lake views were great and the light in the house really great.  It was such a nice day, we didn’t want to end up in a dark place where we couldn’t enjoy the sun.

After showers we headed to town and ice cream.  We lucked into a shop that has 2 for 1 ice creams on Tuesdays in November – score.  We didn’t mean to order doubles but we did, getting one for free.  Oh well, we still ate a full dinner not more than an hour later.  We strolled the lake shore on our way to dinner and what do you know, we ran into Adrian again.  He was hanging out in the park with the thought of putting his tent up once all the locals went home – we felt a little soft heading back towards our nice hotel but age does have its benefits sometimes! 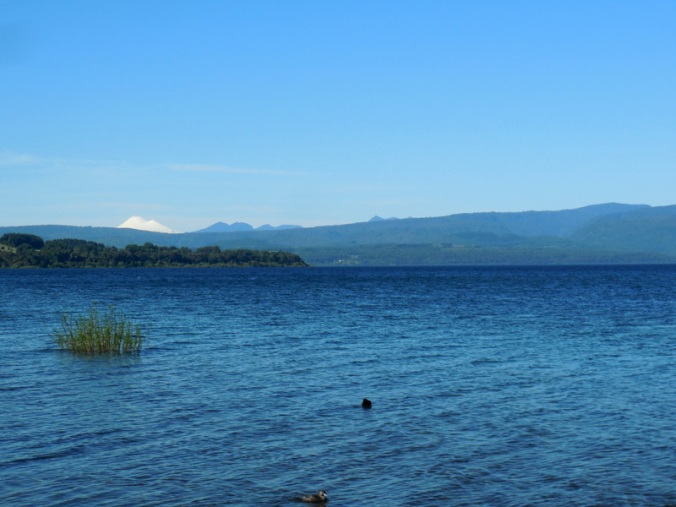 One of the other volcanoes from the lakeshore

Our bikes are locked in the back of our hotel.  You can see them from the street but this guy is on the job.  He’ll lick to death anyone who enters the backyard.

Weather tomorrow is supposed to be good as well.  We might see a few clouds but are not expecting rain.  We have a short day planned, heading towards another lakeside town here in the Chilean Lake District.  We hope to get in a little earlier and maybe get an afternoon nap on a park bench somewhere.  There must be a rest day somewhere in the future, somewhere….

Last photo of Villarrica – at sunset