We got up this morning expecting cloudy skies and possibly some rain.  So you can just imagine how happy we were to see some blue.  In fact, around the cabana and Laja Falls, it was nothing but bright blue skies.  Wow, what a treat.  We rode the 200 metres back to the falls for another look and then headed down the road with smiles on our faces.  We could see sound clouds to the south of us but we had a tailwind and figured that we’d never catch the benign looking high clouds.  Certainly at that point in the day, rain was far from our minds.

Ruta 5 was on its absolute best behaviour this morning.  Nice new tarmac – check.  No cars – check.  No trucks – check.  Tailwind – check.  No rain – check.  It was a beautiful Sunday morning to be out on Ruta 5 heading south in Chile.  Feeling good about the day, I even found time to stop and snap a few photos – nothing overly scenic but at least I was able to get a few shots of our favourite billboards from the last few days.  Spend enough time on an interstate and you’ll start seeing the same billboards over and over.

8 of 10 hybrids are Toyota, the other 2 are good also – which makes me think that Toyota is talking about our bikes being the other two, just maybe

Not a billboard, but we’ve seen a lot of these!

We took morning tea at 45k, at the southern highway exit for the Chilean town of Los Angeles.  I think that’s the fourth Los Angeles that we’ve seen on this trip.  The rest area was called Los Angeles Sur, or South LA.  People said that the big South LA (in California) was not safe – we rode through there in September 2017 with no issues, it was just fine.  Today we also felt completely safe in the small South LA.  You hear a lot about dangerous places when you travel – if you use your head, most places are completely safe.

We had our normal order of medialunas for tea (adding a cheese empanada as it was almost lunchtime after all) and worked out how far we might ride today.  We still had mostly blue skies and the wind was getting stronger.  We toyed with a 130k but agreed to see what the road brought us.  We have no profiles of this part of Ruta 5 because a) our mapping applications either think bikes aren’t allowed on Ruta 5 and won’t route use that way, or b) they simply don’t support bike routing at all in this part of the world and car drivers don’t generally care about profiles.  The second part of the day turned out to much hillier than the first and even with the wind, we had much lower average speed, putting a small damper on the thoughts of 130k. 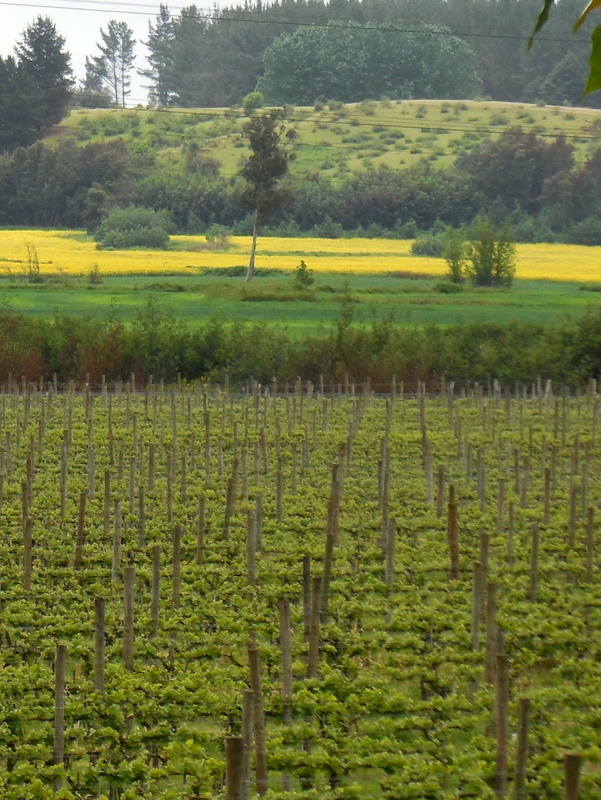 And then there was the minor issue of us catching up with the clouds that I mentioned earlier.  As the day progressed, we saw less and less blue.  By the time we reached 60k there was no blue at all.  Right on the 75k mark we had our first rain drops and by 76k we were stopping to put on rain gear.  It rained on and off for the next 20k but it was mostly a light rain.  Mostly we got wet from the road as it clearly had rained a lot heavier here earlier in the day – glad we missed that. 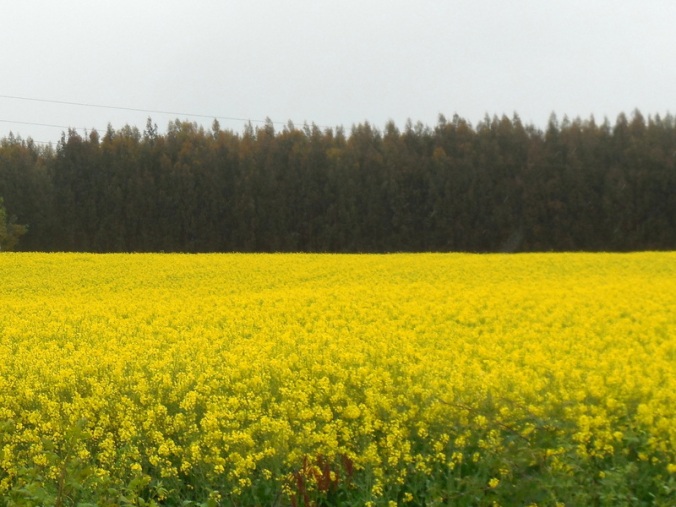 Two bright photos from where we put on our rain gear

One more bright photo before the rain

We pulled into Collipulli, our planned stop for the night about 1:15.  We had a hotel picked out – the Hotel Di Carlo (another tip from riders ahead of us).  We were super lucky at the hotel as the owner pulled up just as we did.  He seemed to be here dropping supplies off before heading out for the afternoon.  Had we missed him, there has been no one else by the hotel all afternoon.  We feared finding hotels fully booked over the long weekend when in fact, we should have worried more that all the hotel owners would themselves be out of town.  So far we are the only guests at this hotel tonight and expect it will stay that way. 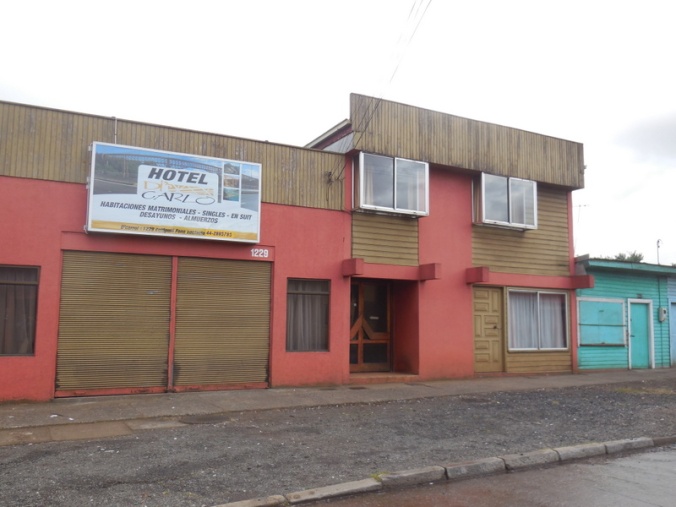 Not much more I can say about this hotel

The hotel owner offered that we could use the hotel kitchen but Nancy was not sure if he meant the entire kitchen, or just the kettle and microwave.  We took a chance that it was the former and hit the grocery store and then cooked up a massive “afternoon” brekkie.  We won’t need much dinner – which is a good thing as there is nothing open in this small Chilean town.

Pan fried potatoes are hiding underneath all that good!

We’ve sat and watched the rain come and go the last few hours but that is supposed to clear by tomorrow.  We’ve ridden 5 days in a row but may ride 5 more – there is a nice clear period forecast and the thought of riding full days in weather like we had this morning is inviting.  We’ll see how we feel tomorrow as we have another 100k planned to reach the small city of Temuco – that will be six 100k days in row.  Lots of miles on these old legs but we are feeling good.

Door of the day – roof missing!