Well, last night wasn’t quite as restful in the old refugio as we had hoped, though I guess that’s to be expected with that many people sharing a small space.  Actually I think it would have been fine but for the guy from the bus who joined us as he was a mad snorer – I didn’t think someone could actually snore that loud without waking themself up!  He seemed to let up sometime after midnight (or maybe we all just got used to it) so we did get some sleep.

By the time we got up this morning around 6 there were already 4x4s unloading people at the island to catch the sunrise.  Dave didn’t get up quick enough for the actual sunrise but did get some pictures of the sun making its way over the top.  The island hosts gigantic cactus and they look pretty spectacular when the morning sun hits them.  It was strange to walk out of our refugio and see all the people milling about after the silence of last night.  As we were sleeping in the building that housed a cultural display several people poked their heads in to see what was in there and were a bit surprised to see all of the bikes and us sitting on the floor, eating our oatmeal for breakfast! 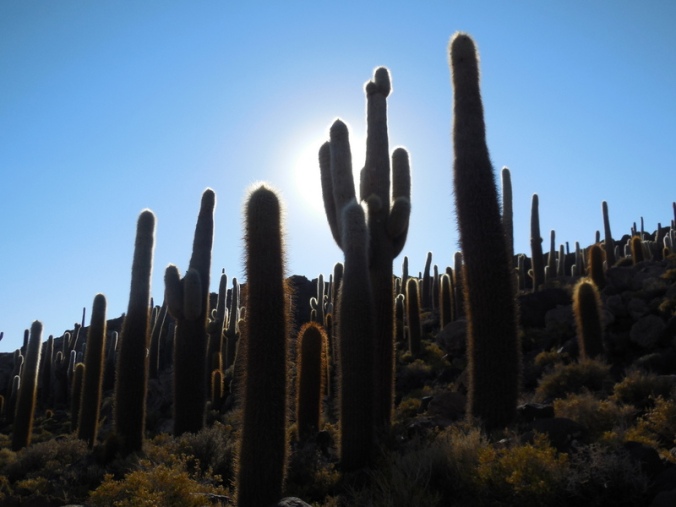 Sunrise over the island

We finally hit the road (more accurately, the sand) about 8:30, saying goodbye to the other cyclists who were heading south.  We checked our maps, got some directions from the workers and headed off.  Dave was a bit behind me and as I headed around the island he called out to me to ask me what I was doing.  Great, only a kilometre from the start and I was already going the wrong way…  I admit that my sense of direction is sometimes challenged, and then put me in a place where there are no visual markers to go by and it can be real trouble.  (Junior editor comment: the sun is a wonderful marker!) 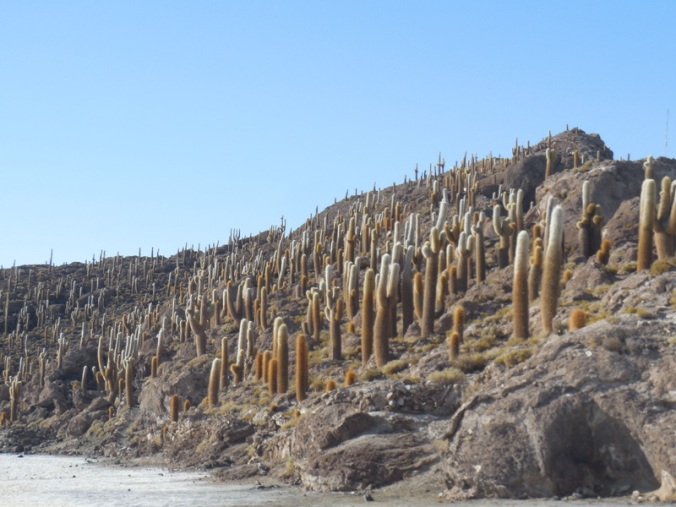 One last photo of the cactus on the island 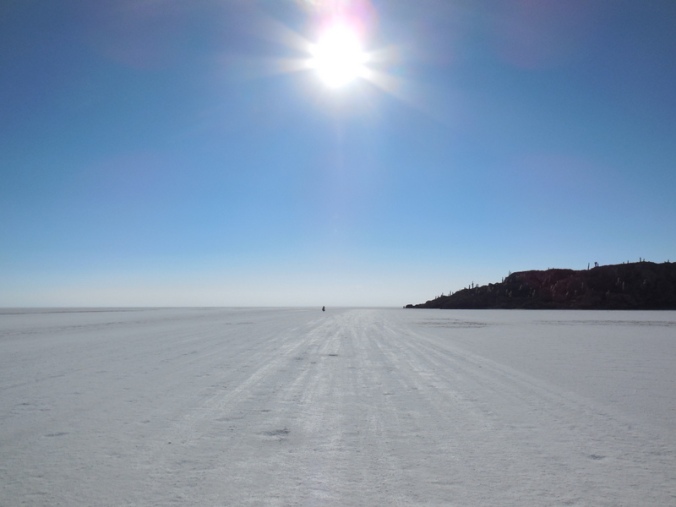 So, we trued up our course and headed east in the direction of Colchani, the first town off the Salar, with the intention of making it to Uyuni.  Just like yesterday, the day turned out to be a bit harder than we anticipated.  Once again, lots of tracks in the salt made it a bit hard to make sure you were on the right path.  We did feel a bit better about the direction than yesterday though, as most of the tracks seemed to be heading in the same direction.  Though it did seem to me at several points that we were drifting to the right a bit more than we should, Dave kept insisting we were fine to continue.  At some point with nothing to mark your progress it’s a bit hard to tell what direction you are going!

Our mapping tools showed we weren’t quite on the ‘main’ track but we weren’t sure if they were misreading our location out in the middle of nothingness.  We did seem to be heading in the right direction though, so we just continued along the tracks we had found.  The tracks were not really much darker than the sand itself, which was not what we expected given the traffic we thought would be coming in and out of Uyuni to the island.  Just enough uncertainty to make things feel a little bit edgy. 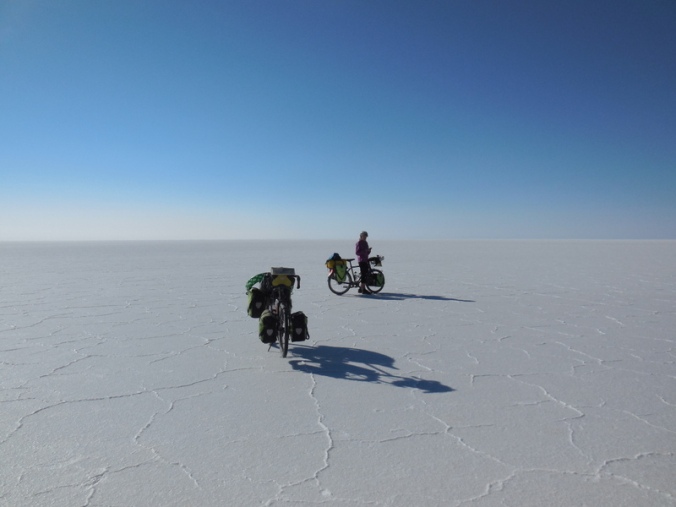 Nancy checking her phone for the route again – note surface – this is a good one, hard and not many rough edges

We did stop and play around with some photos again this morning.  It’s amazing how hard the salt is when you sit down on it!  Occasionally we would both have a moment of thinking to be careful as it could be slippery – it isn’t, of course but it looks so much like hard snow that you sometimes forget it is actually salt.  First thing this morning as we left the island Dave started to tell me to be careful that it might be slippery, before catching himself.  Very odd sensation as your brain and your eyes try to make sense of things. 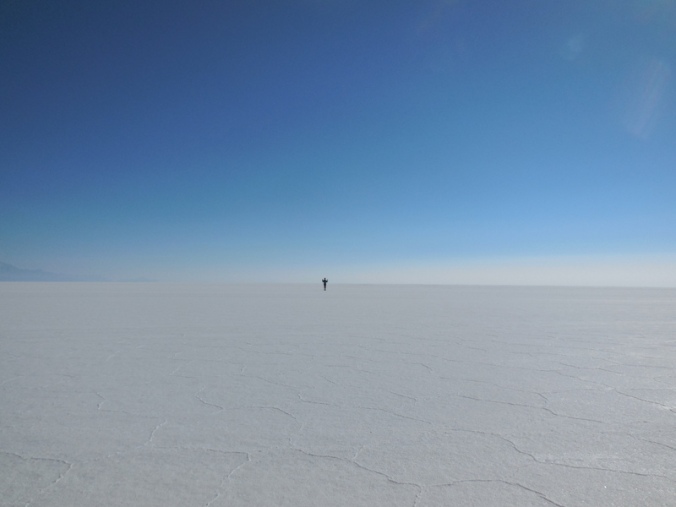 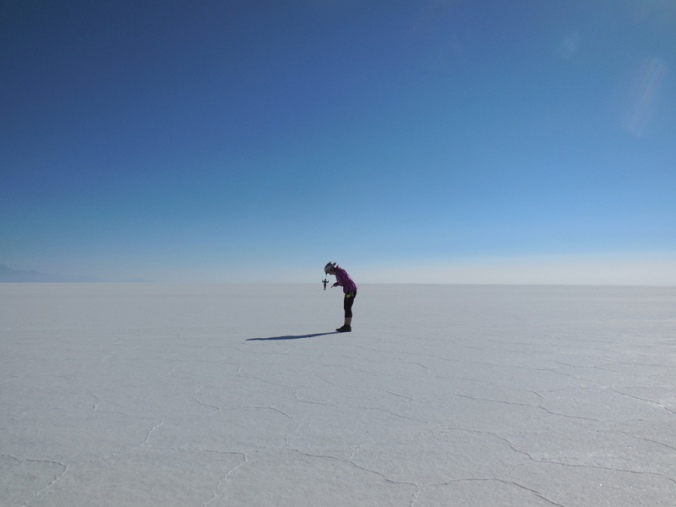 But Nancy is big and still finds him for a scolding 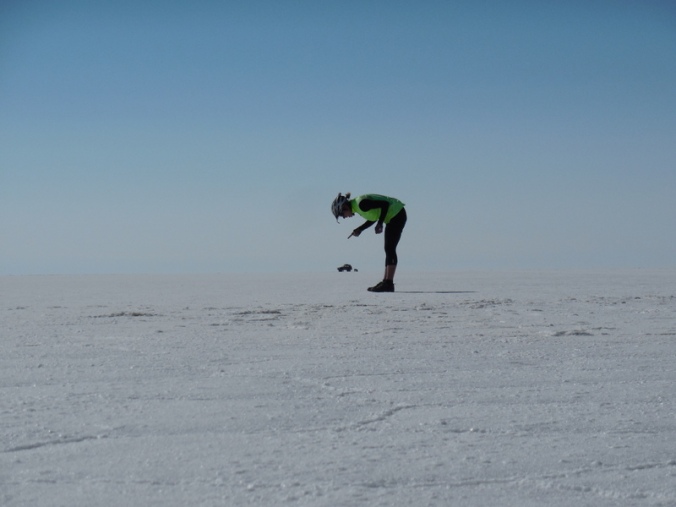 After our photo session we were making pretty good progress as the tracks were relatively smooth to allow us to keep up a decent speed.  We couldn’t see much of anything around us, though occasionally we would see a 4×4 off in the distance (making me wonder again if we were off course).  It was very bright out and I could feel the strain in my eyes despite the sunglasses.  It also started to feel very hot, with the sun reflecting off the salt warming up the sunburns on our faces that we got yesterday.  We did have suntan lotion on but we obviously should have put more on, and more frequently.

After about 40k the track started to get rougher with lots of bumps and even holes where you could see the water underneath.  That slowed our progress down quite a bit, as we bounced along trying to avoid the biggest bumps and the water holes.  I think both of us were getting pretty tired – a stop for a PB&J sandwich and a Snickers bar helped a little bit.  We had been watching a vehicle off to the side of us for a while and finally got close enough to see that it was a big tractor.  When it stopped ahead of us Dave went over to check with the driver that we were on the right track.  She said yes, thank goodness.  Not long after a pickup truck came roaring down the track and pulled over next to the tractor – apparently she had broken down out in the middle of nowhere.  Thank goodness mobile signal still worked out there! 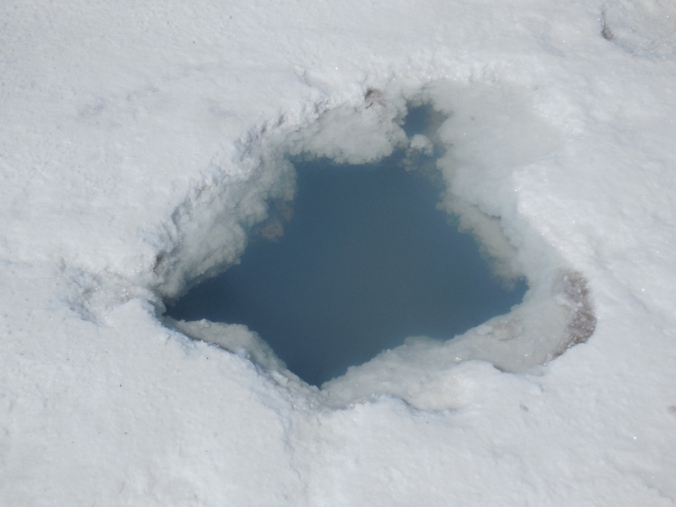 We kept struggling on and finally made it to the end of the track and the ‘famous’ monument to the Dakar rally that was first held here in 2014.  There was a big display of flags, and lots of people spilling out of 4x4s to take photos.  We stopped for a few pictures and then continued on, knowing we were almost finished with the Salar and should reach land sometime soon. 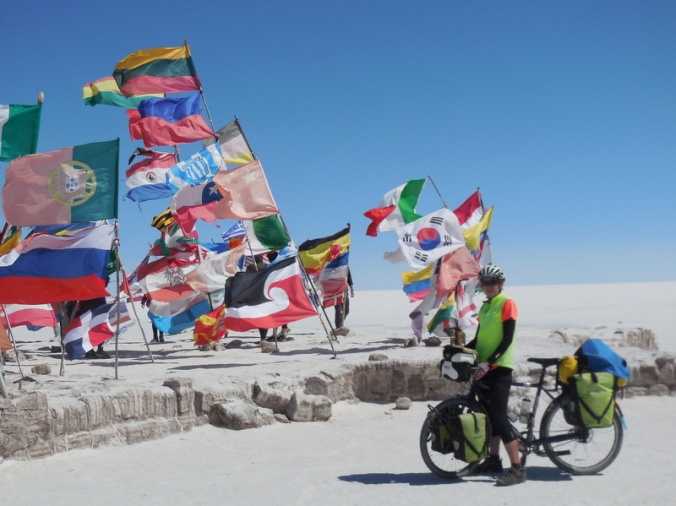 Just as we were coming off the Salar we saw two touring cyclists heading our way.  We pulled over and it turned out to be, the French couple we have met a few times on the road now.  They had taken a different route and were now heading out on the Salar.  We chatted for a few minutes and then each headed off in our respective directions. 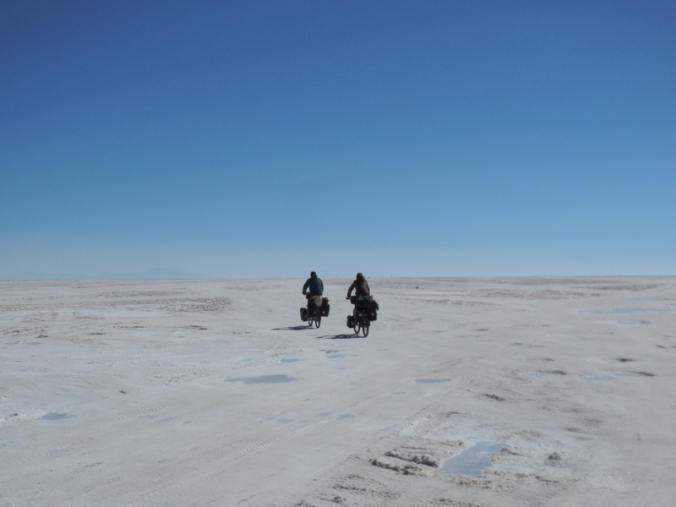 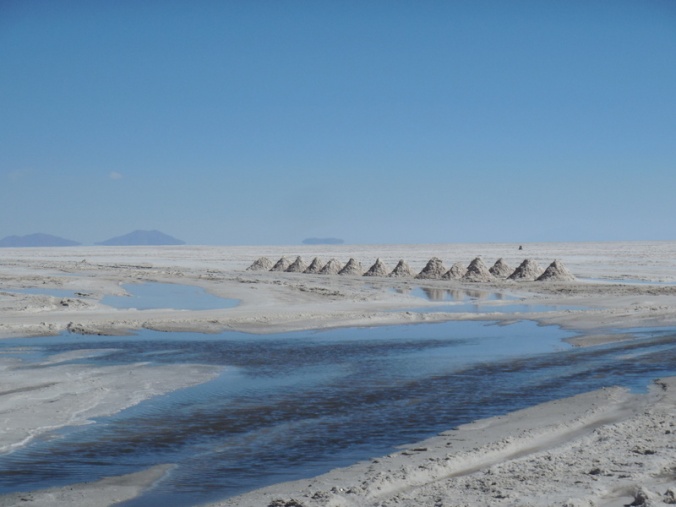 Mining salt near the edge of the salar

At that point it was about 3:00 and we still had 35k to ride to get to Uyuni.  We’d briefly discussed staying at one of the salt hotels on the edge of the Salar as a treat and decided we’d check out what was available.  We were just down the road from the Palacio de Sal, which bills itself as the first salt hotel in the world so we rode to hotel to check it out.  I expect they don’t get too many grubby, salt-encrusted cycle tourists rolling up to their door but they were all very polite.  Turns out they did have a room and even had a hose we could use to wash off the salt off the bikes so we decided to go for it.  Way over our budget but we will likely never be here again so – Sold!  (And thanks to our cycle touring friends Manja and Martin for suggesting a stop here!) 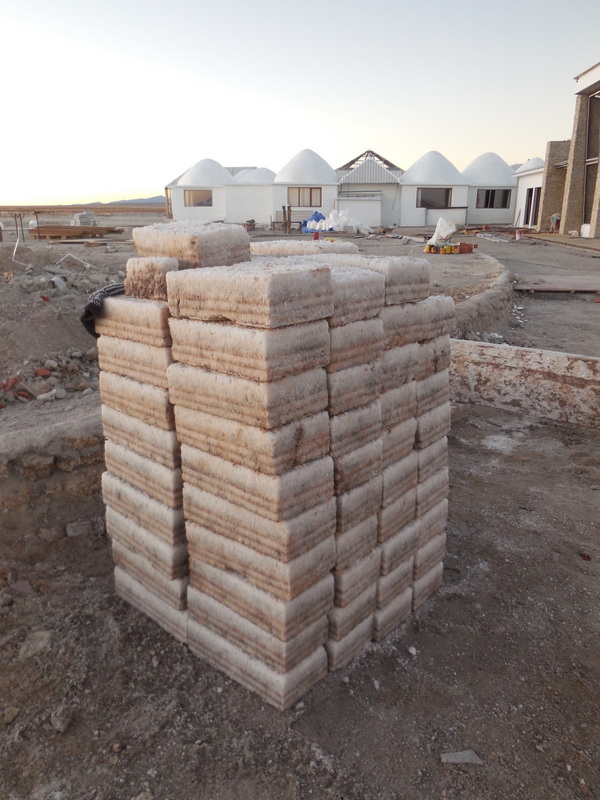 Our room is actually a suite, with views out to the Salar.  This is the nicest place we have stayed in, well, probably the whole trip.  Hot water, plush towels, shampoo and conditioner, fancy soap (2 packets even), a hair dryer and two salt domes, one above the lounge area and one above the bed.  It really is luxurious so we are going to enjoy it.  And it includes a buffet breakfast, which we will be sure to take full advantage of (might even have to take a few baggies with us)!  We have a short day tomorrow into Uyuni so we are in no rush to leave and can sit at our breakfast table until breakfast ends. 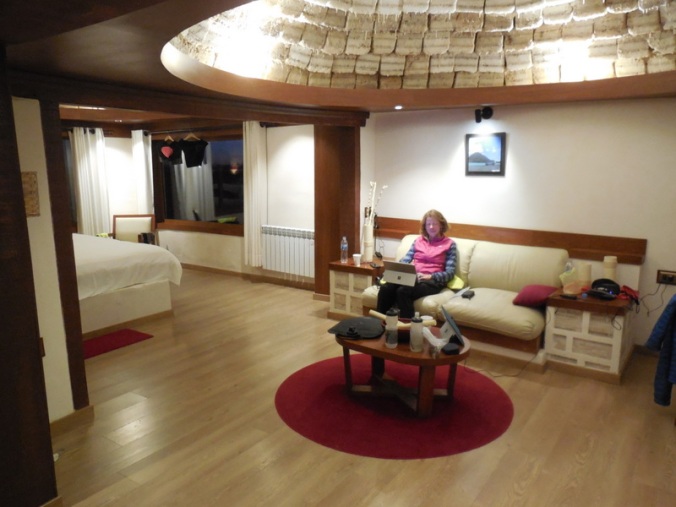 Our room, make that sitting room

So, we have conquered the Salar de Uyuni.  We have covered a lot of ground in the 6 days we left La Paz and we are glad to have made it through the world’s largest salt lake unscathed (other than a bit of a sunburn)! 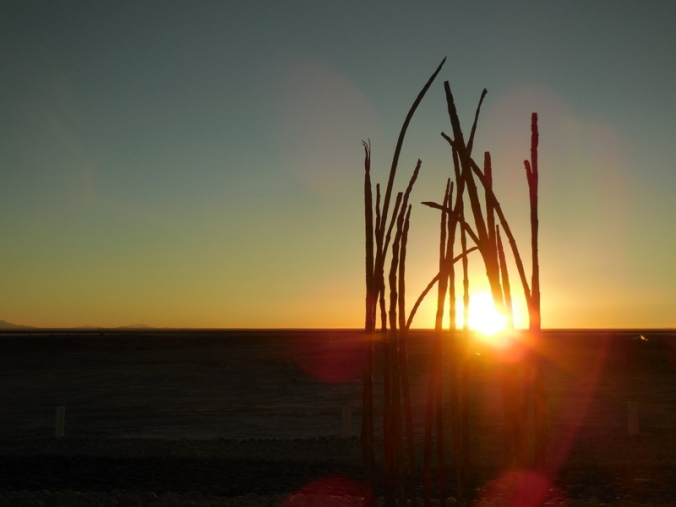 Sunset from our hotel