We’ve really enjoyed our time here in La Paz.  It’s a big city for sure, but we landed in a nice area (Quarter Juan XIII) where there everything we need is close by – grocery stores, restaurants, markets, hardware stores and outdoor stores.  The road south of here will be pretty remote and even basic supplies possibly hard to come by. 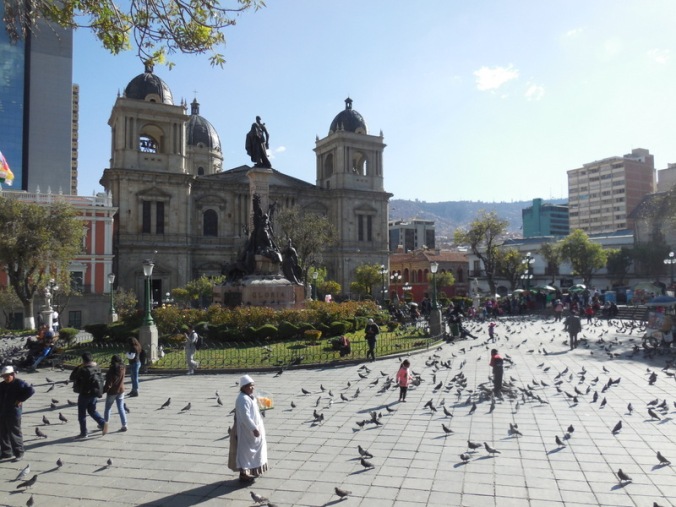 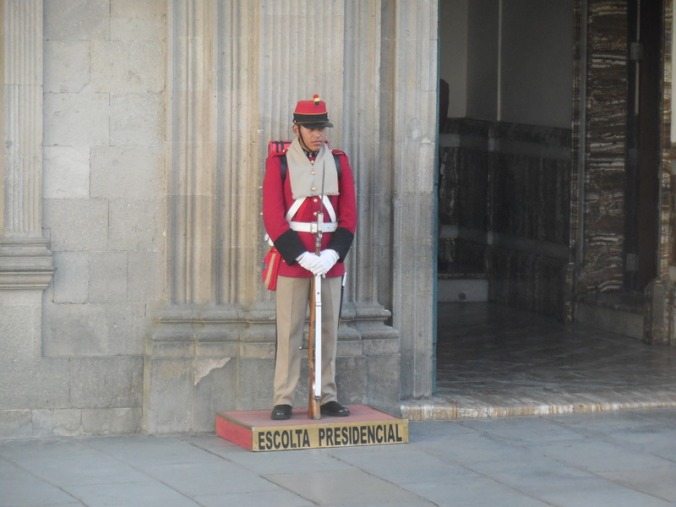 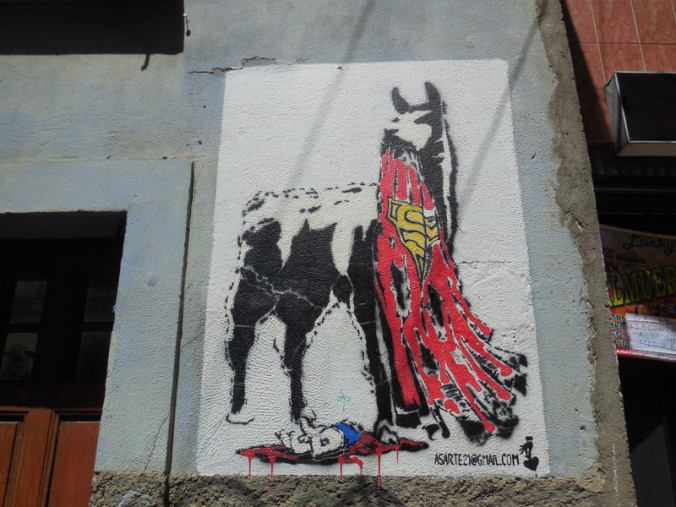 We also needed some difficult-to-find items – such as a new immersion heater and new wrap for our spare tires.  The new immersion heater is to replace one that we burnt out coming into Peru (where the power switched from 110v to 220v).  We found a new heater in one of the many hardware tents near our hotel but it was defective.  Nancy tried it for the first time and it blew up with a flash and loud bang (slightly scary).  We returned it and were told that we used it wrong and nothing could be done, so we bought a second one at a different stall (and gave the original seller a piece of my mind – in English).  We’ll carry the kettle and immersion heater for a while and see which we use more.  And yes, Nancy made me test the second heater.

Finding new tire wrap was pretty easy as there are heaps of shops near us selling vinyl.  We picked over the remanent bins and found a sample in fetching green with white polka dots.  The floral pattern that we picked up in Guerro Negro, Baja was lovely but we’ve been using it for a year now and the plastic is starting to break down from the sun. 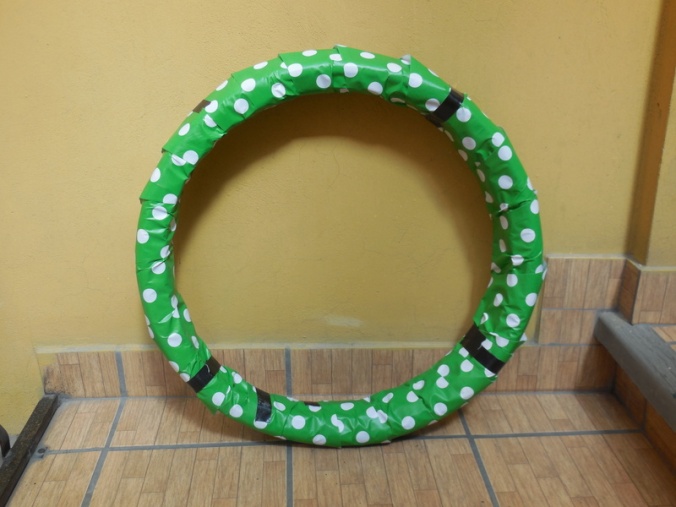 One of the reasons we like to travel is to try out the local food delicacies.  In La Paz we sampled the humble humitas – a tasty corn tortilla like dish.  The recipe for humitas varies between South American countries and today they are found in mostly what was the formerly Inca controlled areas.  In La Paz we tried the sweet version of Bolivian humitas – made with fresh corn, lard, sugar, cinnamon and raisins.  Ingredients are combined, wrapped in a corn husk and steamed.  Unwrap the warm husk and you get a steamy sweet cornbread like concoction – yummy. 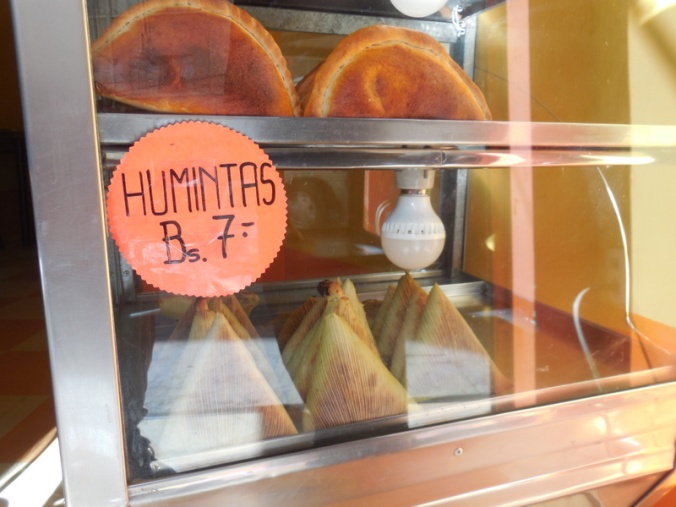 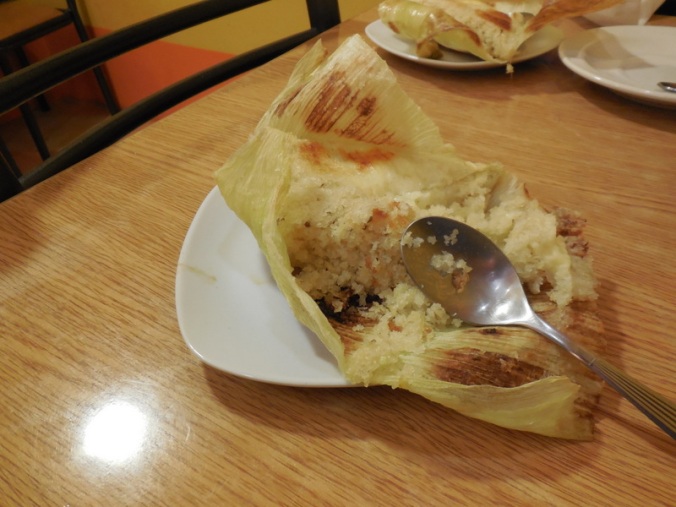 When one travels for a long period of time, it is also nice to take a break from local food and eat things that remind you of home.  Try this in the smaller towns and the standard of “international” food is often low.  In the bigger cities where more expats live or visit, sometimes you get things just as you remembered them.  In La Paz Nancy found an Aussie owned and operated cafe (Higher Ground) where I got to have and egg and bacon roll and she had an avocado smash – two Aussie staples, both done very well.  We also had proper flat whites and even had the chance to purchase a tube of Vegemite – for a staggering $24 AUD – yes, that’s right!  A tube would cost $3 AUD in Sydney and believe it or not, I already have a tube with m.  And though it is running low, we did not purchase a replacement tube. 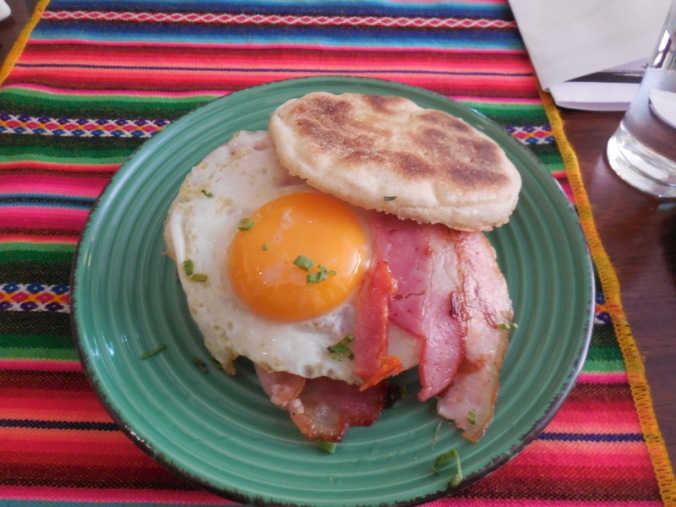 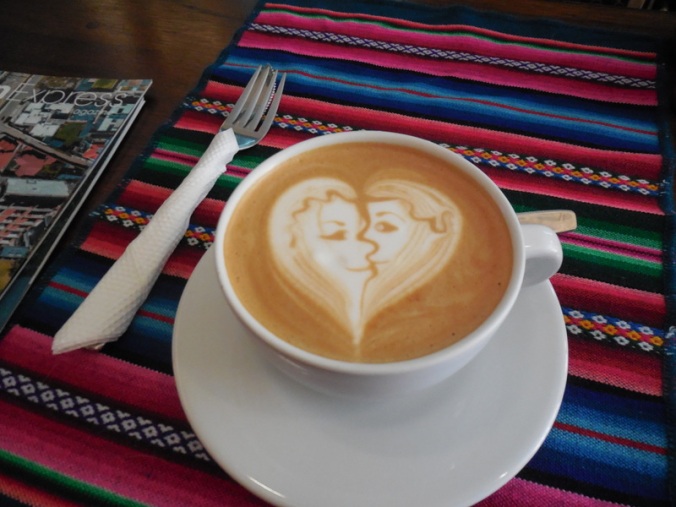 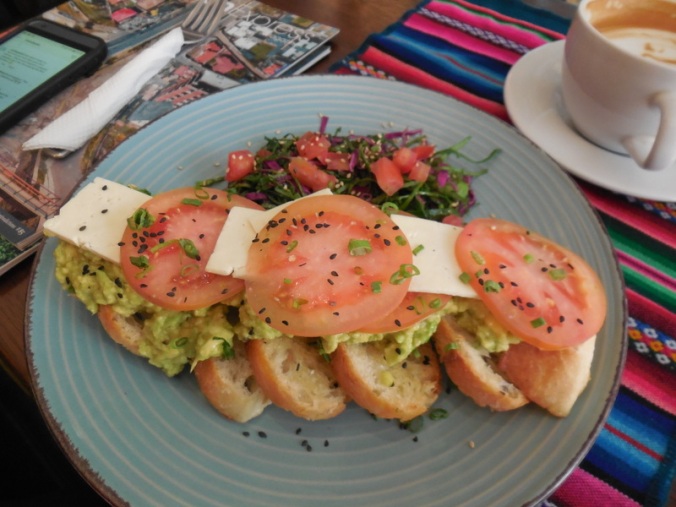 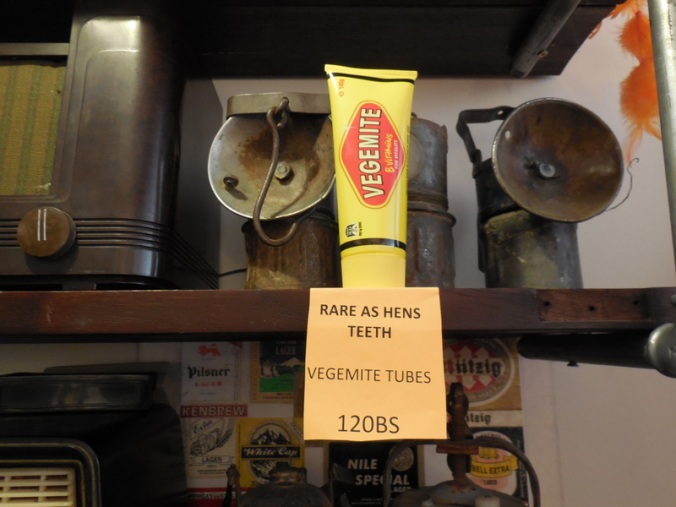 So onto the witches…  We are staying right near the Mercado de las Brujas – or Witches Market.  The Witches Market is the place to go for those suffering an ailment, searching for wealth or good luck, having issues with libido or even simply looking to exact revenge on one’s enemies.  You can find potions for everything, medicinal plants, spells and even spiritual advice.  But don’t go there looking for a show.  The folks in the market really believe in what they do, they don’t think of it as hocus pocus, don’t like their photos taken and are very serious.  Muck around too much and you might leave with a spell cast on you, or perhaps a long white tail that keeps growing – this is serious. 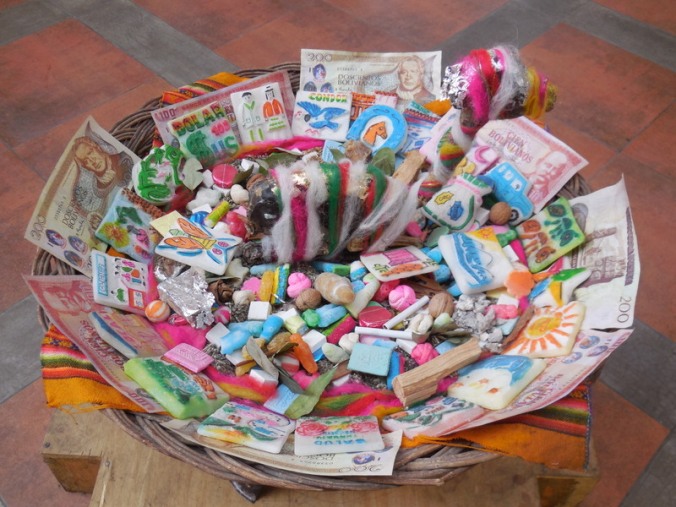 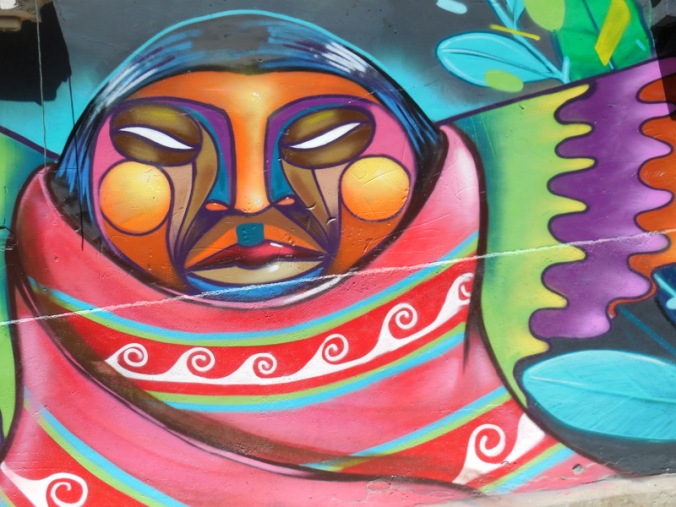 Witch on the wall – with liberty taken 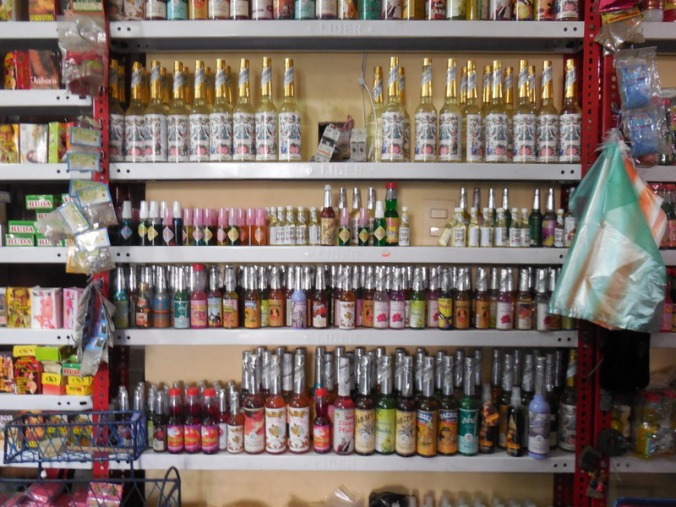 Witches potions for everything!

La Paz is in a valley surrounded by steep hills and even some big mountains.  Transportation is slow and there is no subway.  Getting up the mountains involves steep, switchback filled roads that snarl with traffic.  The local authorities decided to solve some of these problems the same way that they did in Medellin, Colombia – that is, build aerial trams, or telefericos.  So far they have five working trams with plans for another 3.  The trams are great ways to get up or down from the surrounding hills and back into the city.  The largest suburb of La Paz is called El Alto (we rode through it on the way into the city) is also largely indigenous and was not overly integrated.  The first tram to open in 2014 connected La Paz and El Alto helping solve transportation problems and also starting to address social issues.

After checking with the hotel manager about safety at night, we decided to join Philipp and Tine for a ride on the red line tram around dusk.  We wanted to see the city in daylight and at sunset, but we also wanted to check the tram out as a possible option for escaping La Paz tomorrow.  I’m happy to report that while the 2k to the start of the tram is on busy roads, the tram itself is good for bikes and will make a nice exit for us from the city.  We also got some nice views from the top of the tram of La Paz at dusk. 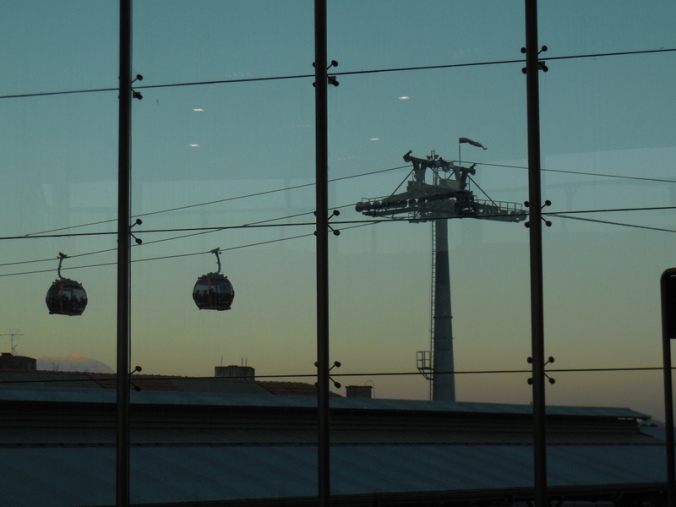 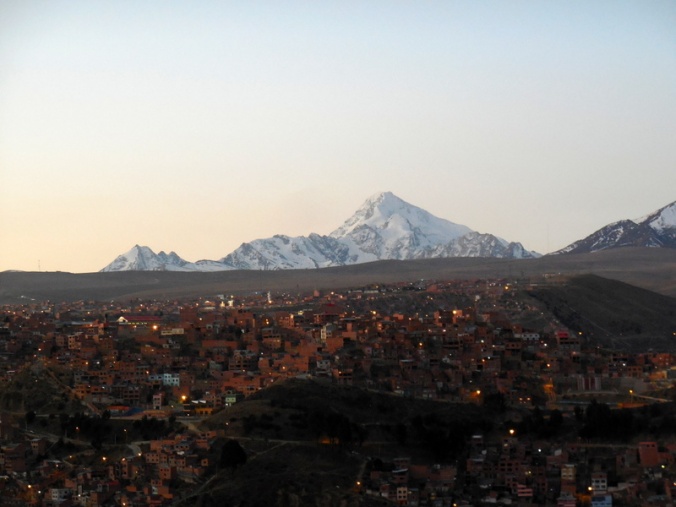 La Paz and one of the many surrounding mountains

So tomorrow, we head south into more remote Bolivia.  So far, staying in mostly tourist areas, we’ve enjoyed Bolivia.  We especially like the bread that we are finding here – heavy sourdough-like rolls available everywhere.  If the bread stays the same heading south, well, Bolivia is already going to get high marks from us.  Getting blogs out while we travel in Bolivia may be harder – we are having issues with our mobile provider and using their hotspot feature.  We’ll post again, when we get WiFI.  It’s only 10 to 12 days from here to the Argentina border so for sure you’ll hear from us at some point in that spell. 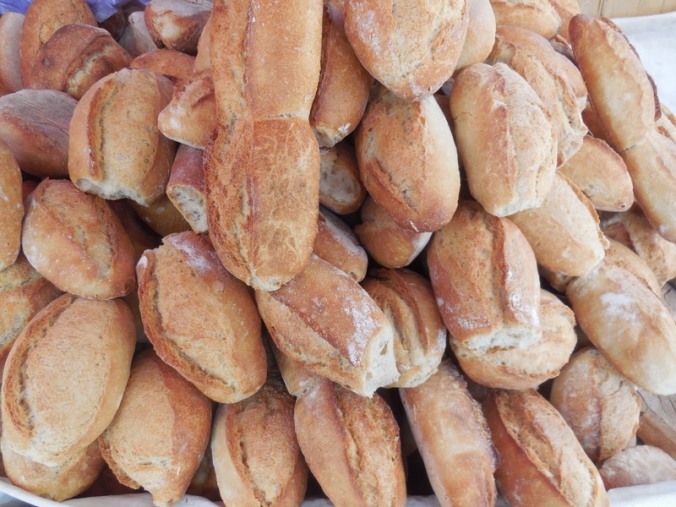 Found on every street corner – for all of 30 cents each, perfect