Wow, what a day.  To be honest, we knew that we were riding along Lake Titicaca today but our expectations of the scenery were not high.  Boy did we underestimate Bolivia on its first proper full day.  For starters, the shoreline here on the southern end of the lake is much more dramatic, with more cliffs and less marshland.  Next, we had to ride a series of peninsulas today where at times we were high above the lake and could see water on both sides of us.

Lake Titicaca home, needs work but the view is to die for

But really, the star of the day was the Cordillera Real Mountains (part of the Andes).  This mountain range sits east of Lake Titicaca and was visible from the road for most of our ride today.  The mountains would occasionally hide as we climbed small hills or rode around the lakeshore, only to reappear slightly closer and even more dramatic on the next rise.  It was hard not to stop and take yet another photo with every new appearance, even Nancy was stopping and getting her phone out.

Cordillera Real, Nancy and one of my favourite photos of the day 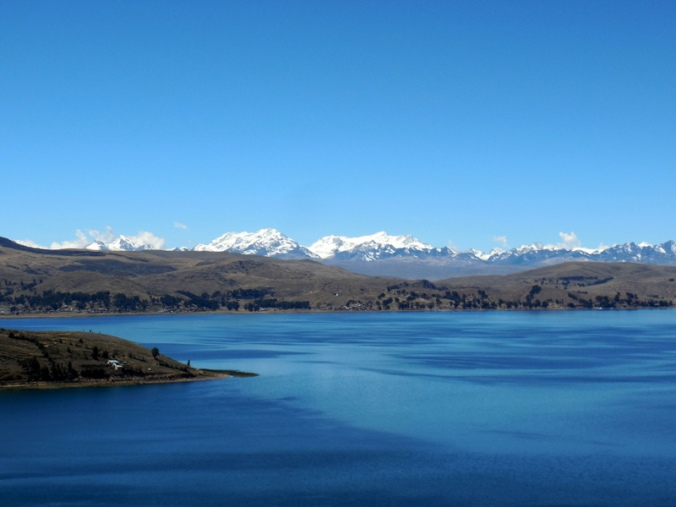 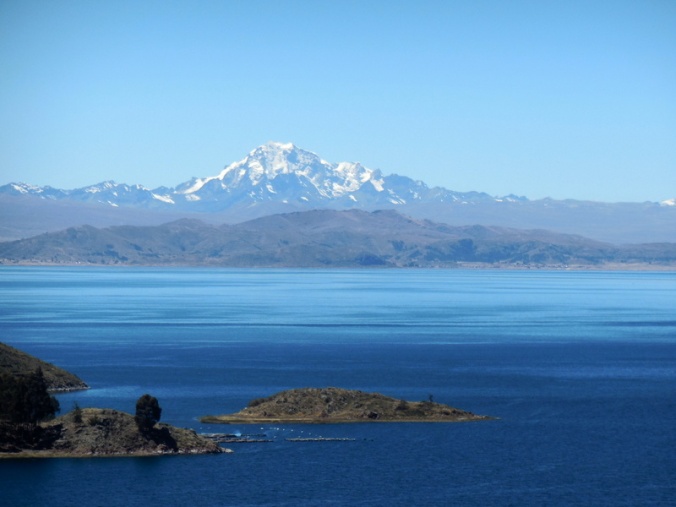 We started kind of late this morning because Nancy really wanted to stop at the phone shop for a SIM.  She was just not happy riding into La Paz tomorrow with no real-time maps.  The shop didn’t open until 9AM so we met Philipp and Tine in the Plaza de Armas for an early second brekkie and wait.  We were first in the queue at the Entel store and had the SIM sorted by 9:30.

On their way to the plaza, Philipp and Tine picked up a stray dog that wanted to follow them and follow it did.  We had a climb of 12k from the city to the top of the first peninsula ridge and the dog walked/ran with Philipp and Tine the entire way.  No amount of “go home” or “vamos a la casa” would shake him.  Philipp tried yelling, rocks, even ignoring – it didn’t matter, the dog was sticking with them.  At the top of the climb, we had a really fast straight downhill with the four of us hitting speeds of close to 60kph.  This was finally the end of the dog as he just couldn’t keep up.  There was small village halfway down the hill where we think he probably ended up.  Dogs aren’t really owned here, they just sort of live on the edge.  We would really have liked to get him back to Copacabana but we can’t really say even if that was his home.  Tough dog though, he will probably cover close to 30k today, if he makes his way back to Copacabana.

Oh yeah, we had nice views back to Copacabana on the climb.

At the top of the climb was when we first started stopping and seeing the Cordillera Real – and the photo sessions started.  From the top we had about 25k of rolling ridgeline to ride in order to reach Tiguina and the ferry from one peninsula to the next.  We had no traffic all morning so it was not surprising to hear the ferryman tell us that he would not take us across until some cars came and that might be awhile.  We settled into the plaza and ate our lunch, and waited.

Eventually, one of the other, smaller punt boat operators came over and told us that he would take us for $1.50 each and that all four of us would fit on his boat, with our bikes.  Great, no more waiting for cars.  It was hard getting the loaded bikes off the dock onto his boat but with everyone pitching in, nothing ended up in the water.  We had to stop half way across to adjust the bikes as the boat was listing to one side – oh how exciting!  We made it safely eventually and got the bikes unloaded, again with great strain.  Philipp’s handlebar broke one of the boat windows getting it out but the window was already cracked and taped so we just paid the agree fee and moved on.

Bikes shoved on the ferry

Yikes, this is fun

The 37k from the ferry went pretty fast, once we climbed the 6k from the ferry back up to the peninsula ridge.  We had a nice tailwind most of the time and views of the lake and mountains to keep us entertained.  We also knew that Philipp’s dog friend would not be able to get across the water and catch us – though every black dog that we saw was given a good looking over.

We had some construction in this section but it was really odd.  They are trying to make a dual carriage way but somehow seemed to have lost the plans along the way.  All four lanes are done but they clearly have been this way for some time.  There were lots of bridges still only two lanes and many cuts across all the lanes for some type of utilities.  And there were very few equipment trucks visible.  It looked like the project was sort of stalled.  Even though it was Sunday, the flaggers were out, sort of – see below. 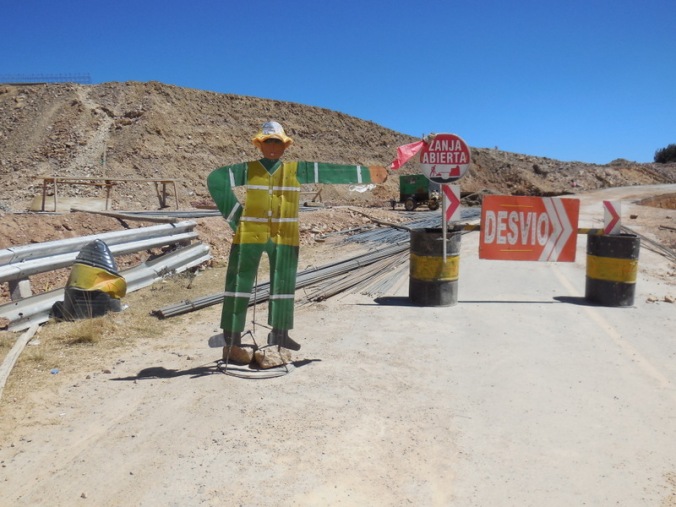 Flagger number two – the smart one with a sun hat

We rolled into Huarina about 3PM and tried finding a place to stay.  There was only one hospedaje but no one answered the door.  We asked a lot of people on the street but didn’t get too much help.  We’d heard from the 7 cyclists we met the other day that they had stayed in a spare room at the Catholic church so we tried there as a last resort.  There was a woman at the front gate who gladly said yes that we could stay.  The only issue was the Padre was resting and we had to wait for him to wake up.  No worries, we sat in the sun on the steps of the church and relaxed – it was nice to just reflect on the great day of riding that we had – clearly exceeding our expectations by a mile.

Eventually the Padre came out and showed us our room.  He was more than happy to have us stay.  Our room is a big concrete building with a few bare light bulbs.  We have a bucket flush toilet, no shower and no wifi.  But we have a toilet seat and a safe place to stay for the night, so we are all more than happy.  Tomorrow we ride the last 70k to La Paz.  We’ll be aiming for an early start, so as not overstay our welcome here and to give us plenty of time to enter the big smoke.  It’s 8:15 and I think we’ll all be sleeping by 8:30 – lights out early tonight for all of us…