Wow, what a day!  No make that two days because it really was like two days.  Our first half day was all about getting to Rainbow Mountain.  The second half was a 52k spin up the Urubamba River.

Philipp took this photo last night in our hotel room when they came to get us for dinner.  It is cold up here in the night time.

First to Rainbow Mountain.  We were up at 4:45 and ready for our driver to take us up the mountain at 5:30.  He was only 25 minutes late and we eventually hit the road at just before 6AM (boy that extra 25 minutes sleep would have been nice).  The ride up to the car park and start of the hike only took us a little over an hour.  The road was mostly dirt, very steep and had massive drop offs, on Nancy’s passenger seat side of the car.  And the car only had seatbelts for the two front seats.  It was very scenic but the windows were fogging and you couldn’t see much from the back seat.  I tried to sleep but that didn’t work as the corners had Philipp, Tine and I sliding back and forth like bowling balls on ice.  Everyone was ready to be out of the car by the time we reached the car park. 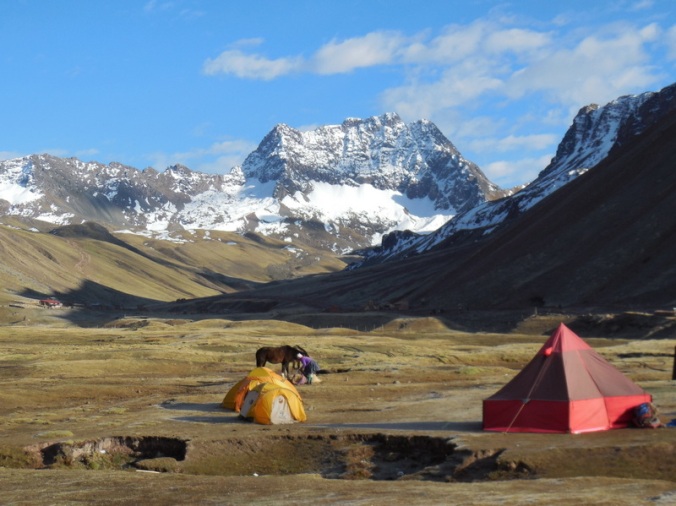 View from the car park – and it gets better!

We were one of the first vehicles of the morning so we had a nice quiet hike with great morning light and few people to clog up the photos.  I say this as by the time we were coming off the summit, it was a regular conga line of folks going up.  Sure glad that we got there early. 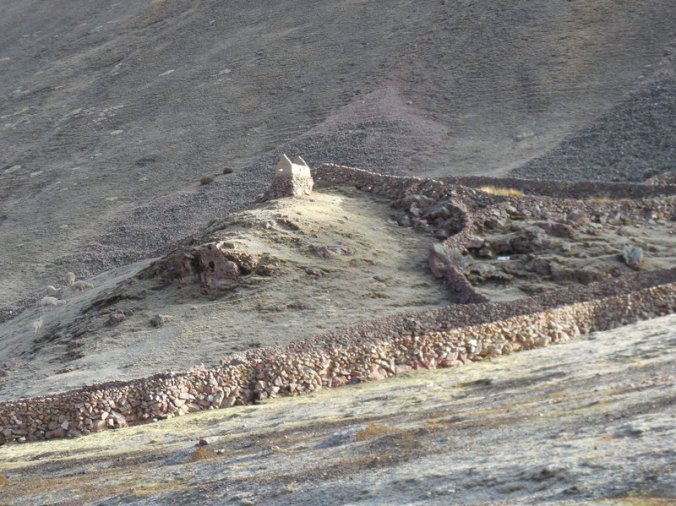 Inka ruins near the start

These chaps were heading down, looking for more folks to give a ride to.  We passed. 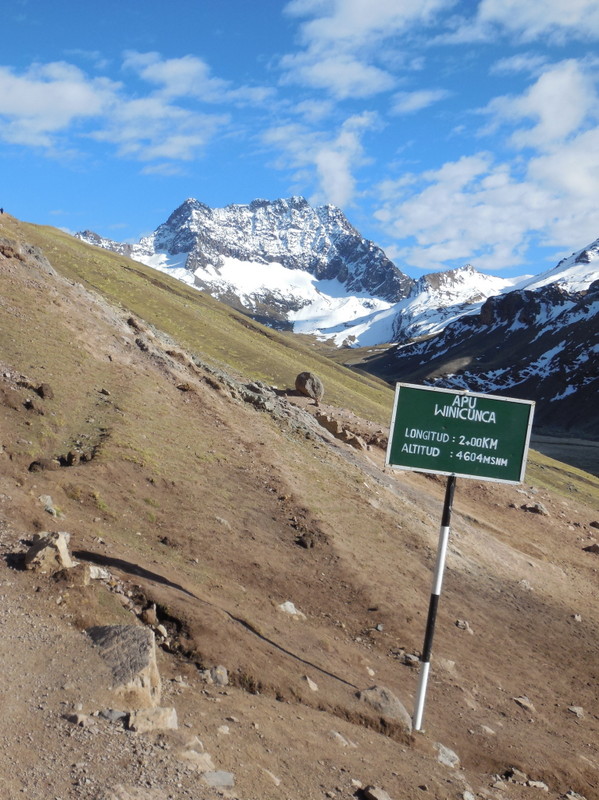 The Rainbow Mountain car park is at 4,300 metres (14,107 feet).  It’s a 5.5k hike to the highest point at 5,200 metres (17,060 feet).  The walk up is mostly gentle in grade but it is still very slow at these altitudes.  We didn’t stop much before we reached the summit, except for photo stops, and there were quite a few of these.  We had blue skies with mostly just a few wispy clouds – it was a spectacular walk really. 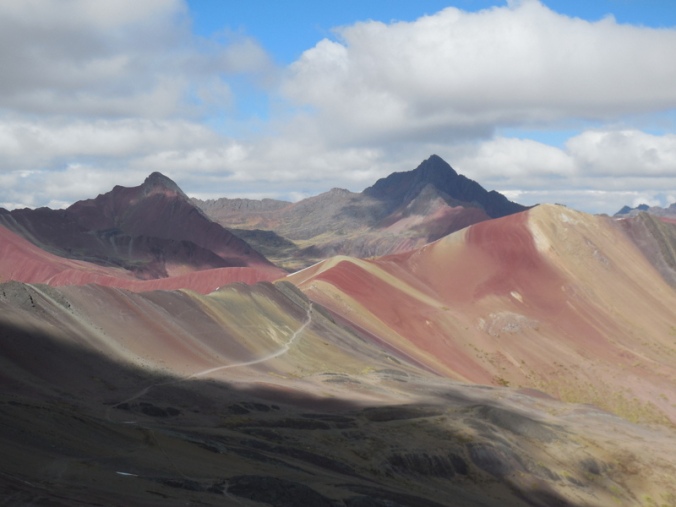 The rainbows are not just on the one mountain 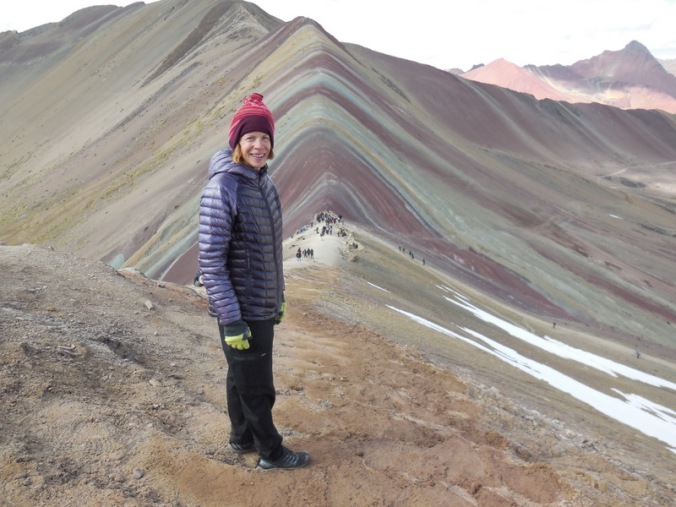 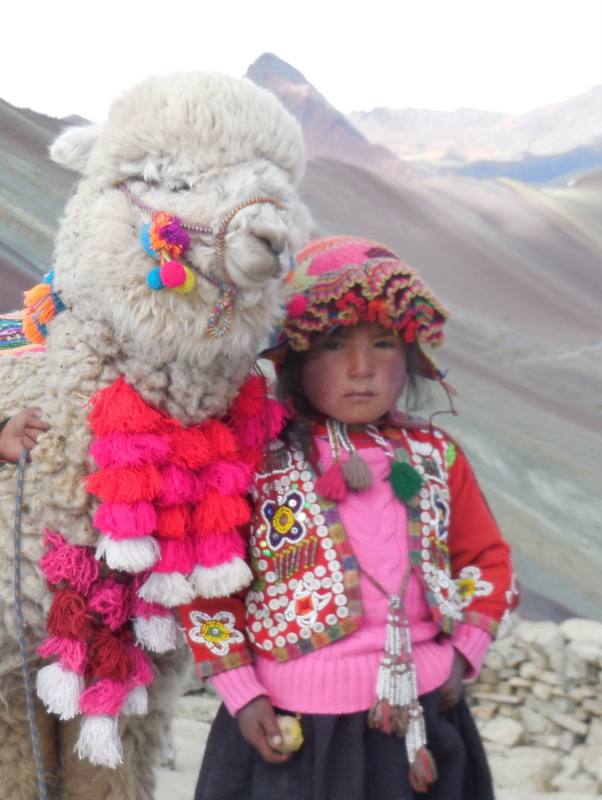 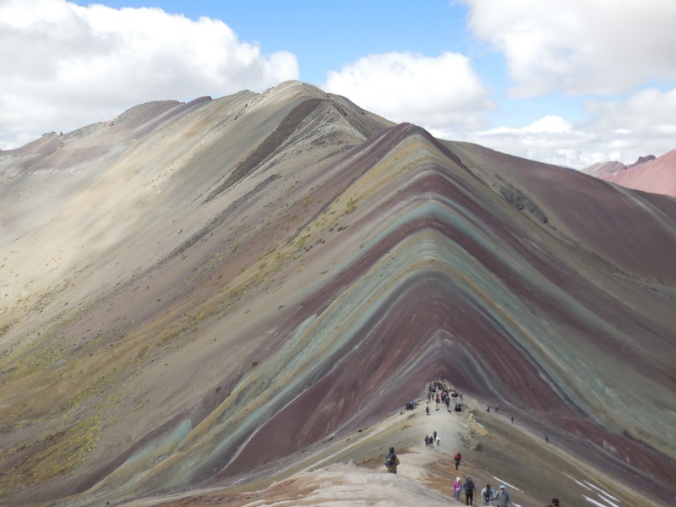 The mountain, with building crowds now

When we reached the high point, there were probably 50 people up there milling around.  We still managed to get some nice photos and enjoy the tranquillity of the location.  You don’t really see the Rainbows until you are the top and can look across at mountain proper.  The colours are amazing, red, brown, yellow, black and some green – all blended in big wide stripes.  The views out Mount Ausangate were equally stunning.  Standing at 5,200 metres it looked much higher than its reported 6,400 metres – it is the sixth highest peak in Peru.

Mount Ausangate with us 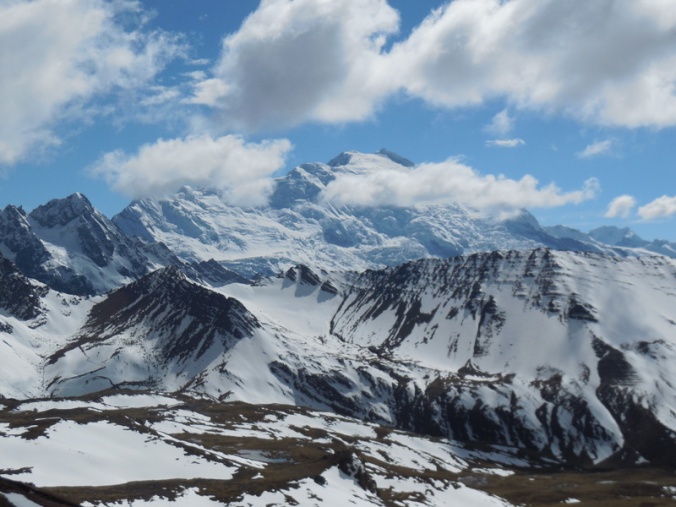 We stayed on top for about 30 minutes before we returned back the way we came.  Going down was heaps easier than going up.  More air with each step and no gravity to overcome.  The only issue now was getting past all the folks trying to reach the top.  This hike, from the new car park where we started, has apparently only been open for a couple years.  Until now, there has been too much snow to see the rainbows for much of the year.  Global warming has created another tourist point for Peru, which is great as they are losing glaciers which used to be the tourist draw.

Even the valleys are nice to look at

We made it back to the car park about 10:30, and it was now packed.  Our driver was actually from the place we stayed last night and he did the hike with us – it was nice having a guide tell us about the area.  On the way off the mountain, we stopped at a local market to get lunch supplies.  We also stopped at a place where there is an Inca bridge and a colonial bridge right next to each other.  Since our driver was just a local guy, he offered to make lots of other stops but we declined so that we could get a short ride in as well today – I think that he may have been avoiding chores at home.  We had lunch back at Camp Chuquicahuana sitting in the sun and managed to get on the bikes about 1PM.

Inka and colonial bridge standing side by side – neither are used now, except for selling tickets to tourists – we just took photos

For sale at the market – Cuy – we still haven’t tried any, may not…

We don’t normally like starting a ride in the afternoon but today, just like yesterday, the wind was whipping up the canyon that we had to ride up.  We had over 50k to ride and were breezing along at more than 25kph for most of the climb.  I think that we could get used to riding uphill if it was always that fast.  It helped immensely that the grade here is much gentler than those we found north of Cusco.

Near the end of the ride we overtook the Luxembourgers again.  They were stopped at the side of the road taking photos of birds.  We toyed with riding with them but we were really going pretty fast at this point and they seemed to be more in early trip picture mode, so we pressed on.  We covered the 52k in a little over 2 hours and were at the hotel well before any of us thought we might be.

Our hotel is a little south of town and away from the main square so we walked back there for dinner.  We are all pretty tired having had really two days in one.  I think if either Nancy or I had suggested a nap and spending another night at Camp Chuquicahuana, the other would have agreed.  I mean, how much more exercise does one need after walking to the top of a 17,000 foot mountain?  Oh well, the tailwind was nice and now we’re one day closer to wherever we are going next.  (found the graphic below on the web while reading up on Rainbow Mountain – zikes!) 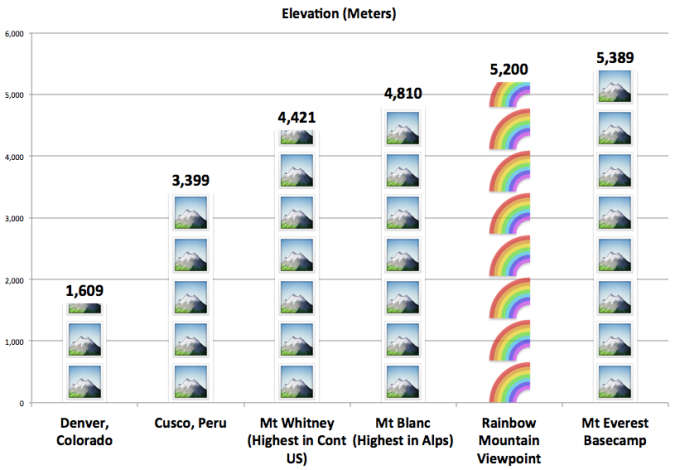 We have a couple long days coming up now, about 100k each.  But there is very little climbing on either of them and we are banking on those afternoon tailwinds.  Fingers crossed.