Today our plan was to visit one of Cusco’s bigger local markets, the Mercado Central de San Pedro.  We made it to the market eventually but had to pass through the Plaza de Armas on the way there and guess what, there was another parade going on.  Peruvians love their parades.  There are so many parades here that today’s parade didn’t even make the calendar of events for the city of Cusco.  And this was no small parade.  We walked by the parade the first time at about 10AM, took some photos, went to the market, had lunch and a coffee and returned to watch more of the parade still going strong at 3PM.

We tried to decipher what the parade was for while we were there, even looking on-line but we couldn’t quite figure it out.  Back at the hostel, we learned from the manager that the parade was in honour of the National School of Sciences and Arts of Cusco (mostly a science school).  The school was founded in 1825 and there were people marching from many different graduation classes (not 1825 however).  Some marchers were in full uniform, others in suits and even more in funky costumes.  In the staging area, there were many beers being consumed – it was really just a big party – a bit like a homecoming parade.

Getting ready for the parade 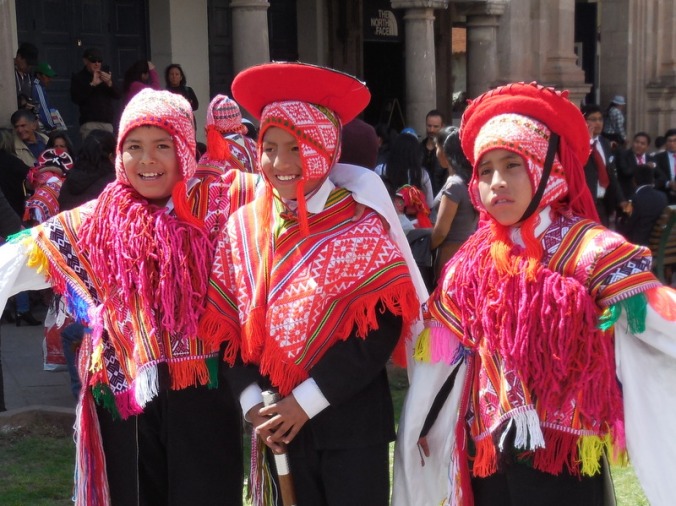 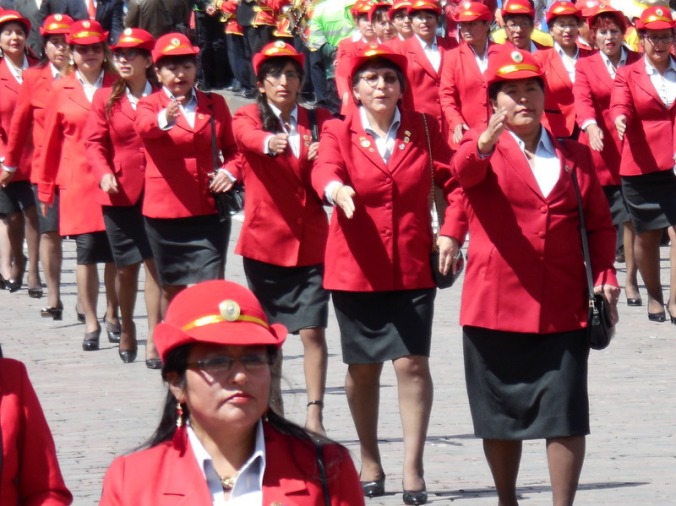 Current students at the school also participated in the parade.  Which is where the mystery-solving part of today comes into play.  Many of the troops of kids we’d seen practicing in the square this week were back now, in full costume performing their routines for the parade.  On our way home we stopped and watched a bunch of different troops of kids, mostly very serious, but still being kids.  The best part may have been the staging area where every kid with a rope was snapping every other kid with a rope.  Snapping alternated with spells of boredom – it was a long time for the kids to be out in the sun in some really hot costumes.

Unfortunately, the vast majority of the parade participants were male.  This would not be surprising for the old classes from the 60s and 70s, but in the younger classes this seemed to hold true as well.  Come on girls of Peru, science is fun!

Oh yeah, and then there was the market.  Mercado Central de San Pedro is one of several larger markets in Cusco.  You can find just about everything in the market for one’s daily food needs.  There is no refrigerated area so things have to be fresh or they don’t get sold.  In South America most markets have a fresh juice section where ladies work hard to first get your attention, then sell you a fresh juice.  Juice comes in just about any flavour fruit you want and more or less costs the same amount.  All of the juice is made fresh on the spot from fresh fruits and veggies.  Today we had a combo fresh squeezed orange and grapefruit mix – no sugar added – nice and tangy.

We wandered nearly every row in the market, even the smelly cheese row.  We skipped the fresh meat rows as you don’t actually have to go down them to get the very ripe smell of raw chicken, pork, beef or other unknown meats.  The bread section was interesting with most ladies selling giant round loaves of soft white bread.  The fruit and nut section is always one of our favourite stops as we buy supplies for camping dinners and breakfasts that we need down the road.  We just have to hide them well enough so that they don’t become a snack before we start riding. 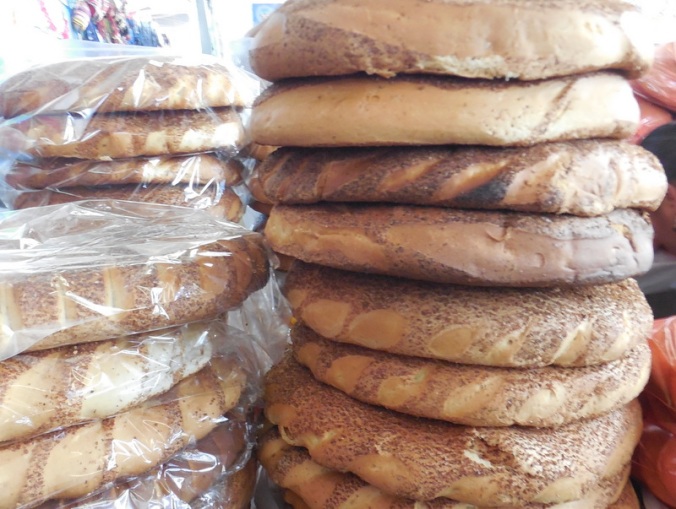 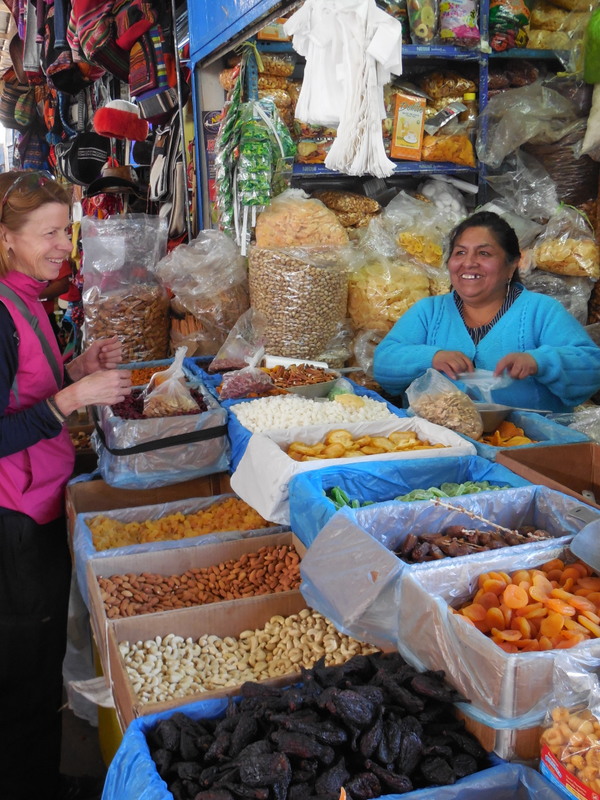 Nancy and the nut seller

There is a souvenir section in the market as well – we don’t buy much in this section but there are some nice photo opportunities.  Nearly everything is made of alpaca in the market, or at least that’s what the sellers claim.  We did not see any vicuna in the market – perhaps not that many people come into this market looking for $2,000 USD scarves.

Dolls made of alpaca – sure 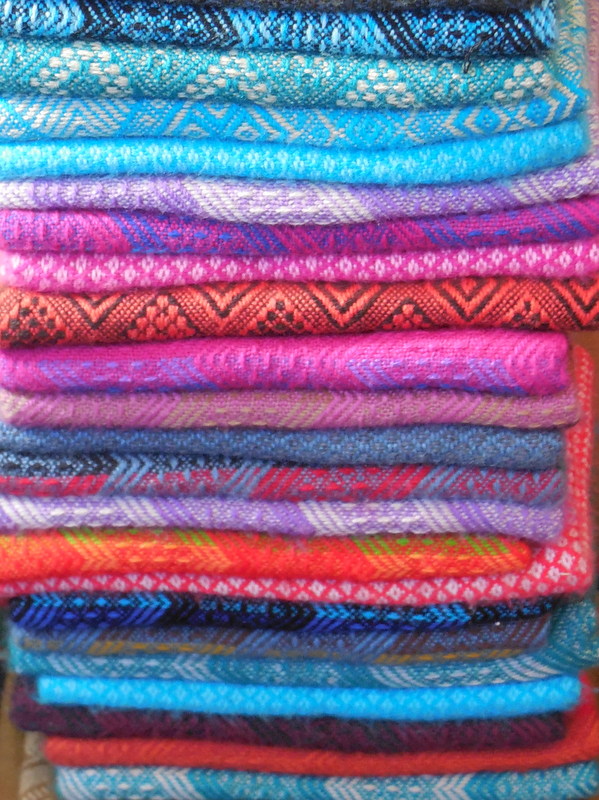 You can almost feel how soft these are

And one last image of Cusco that we found interesting.  All over town and in full display at the parade today, there were heaps of rainbow flags.  We’ve not seen this in Peru before Cusco.  One might be forgiven for thinking that Cusco is a very open minded society, perhaps strange for a heavily Catholic country.  Well, yes that would be strange and in fact, not true.  It turns out the official flag of the city of Cusco is a rainbow striped.  It was introduced in 1973 by a radio host in celebration of the 25th anniversary of the radio station.  Glad we got that straightened out as clearly judging from the recent news headlines, the Pope has more pressing matters to worry about than rainbow flags flying in Cusco. 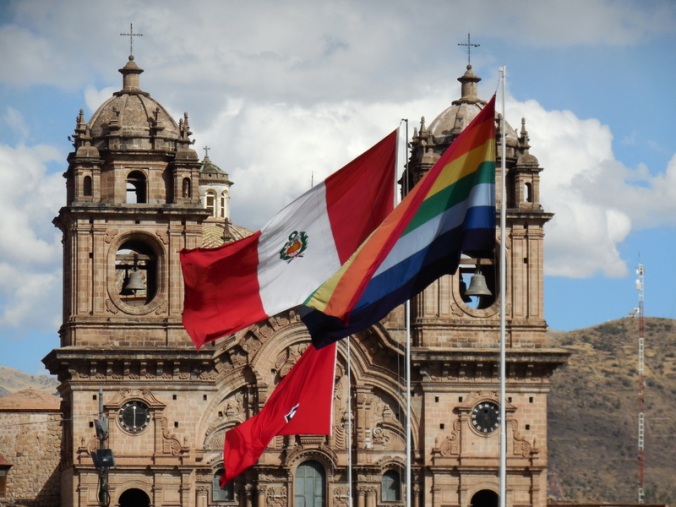 We have one more day here, before we head off to Machu Picchu on Tuesday morning.  The biggest challenge we have right now is picking where to eat dinner tonight – there is a rib place, an Italian restaurant and an India curry house.  Yes, we like Cusco!

4 thoughts on “A market, a parade and a mystery solved in Cusco”