We ate brekkie at the hotel today with Philipp and Kathrin.  I was last one to the table and placing my order but I didn’t order pancakes like Philipp and Nancy did.  Long-time readers will know that Nancy likes her pancakes.  Today’s order was a bit odd, small and covered in chocolate syrup.  To be fair, the pancakes came off the desert menu, not the brekkie menu – so they were bound to be bit different.  Nancy had to order a pan de queso to supplement her pancakes.

Nancy and her sort of odd pancakes

We left the hotel at about 8AM and it was cold starting out.  The sun took a while to reach the bottom of the canyon we were riding through and it was only 3C in the morning.  Everyone was rugged up with gloves and warm coats.  We climbed right from the get go and really pretty much for the next 37k.  Add this onto yesterday’s climb and the total climb was about 120k – topping out at over 14,000 feet. 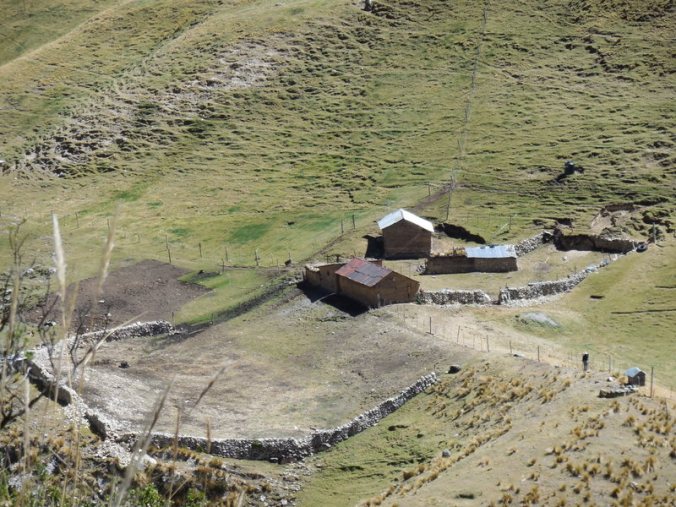 Monument on the climb

The first half of the climb was lined with mining village after mining village.  We stopped for morning tea at one of the last stores where they were selling cheese and drinking yogurt.  Everyone tried the yogurt and it was pretty tasty – we’ll be looking for more it in the coming days.  Kathrin bought cheese for later use at lunch.

The climb took quite a while to finally reach the top – it was past noon by the time we crested the summit.  On top we had some nice views back to the Cordillera Blanca and a nice summit lake.  On the climb we saw heaps of llama (or maybe alpaca) and in the summit lake we saw our first pink flamingos.  The traffic was sort of medium with a lot of trucks.  Today however, we could use the shoulder more as the lip from the traffic lane and shoulder was not as noticeable.  Yesterday it was mostly a steep drop off. 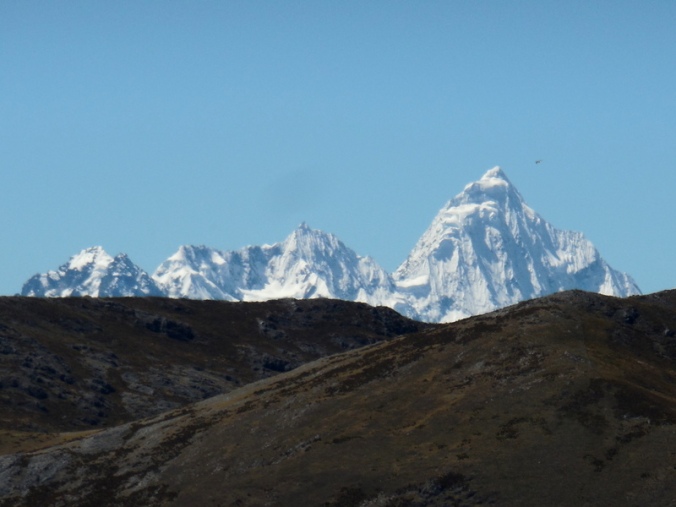 One last look at the Cordillera Blanca 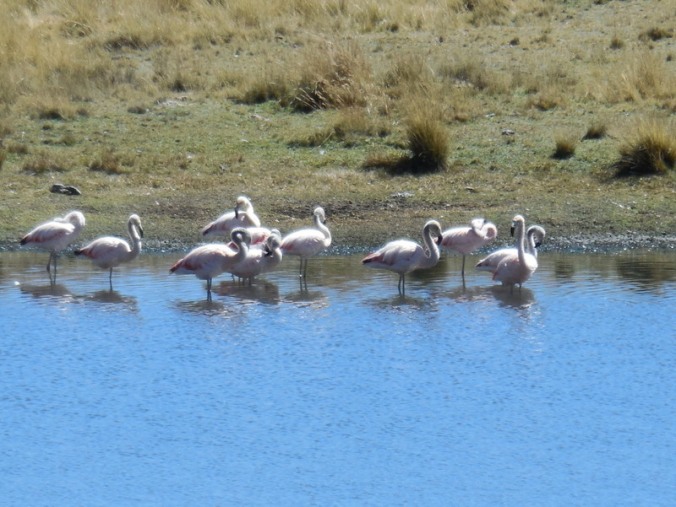 Who you looking at?

Nancy set me out a project today to photograph just the “icon” of the political parties’ signs that we passed.  You know how in the USA the Republicans have an elephant and the Democrats have a donkey.  Well, here in Peru, there is much more variety, with every party having something – mostly you can figure out what they mean, many times I don’t think that they relate overly deeply to the parties core values.  Below is a montage of my many icon photo stops today.

We stopped for lunch at a servo truck maintenance bay for lunch.  It wasn’t overly glamorous but it was out of the wind and in the nice sunshine.  Both Nancy and I could have easily taken a nap right there on the spot but we couldn’t really afford to.  We had another 60k to ride and it was already 1PM.  Luckily the afternoon was flat or downhill and we had some tailwinds.

The last 60k went pretty fast with Nancy and I hanging onto the back of our younger German friends to make sure that we didn’t get dropped.  We were pretty tired when we rolled into town and began the hotel search.  We ended up at a nice enough hostel called Nebys Hostal.  The owner is super nice and tried hard to make us feel welcome.  He even put up little Australian and German flags in our honour.  We had nice hot showers and headed to main square to get our Spot message out and buy supplies for tomorrow.  As the sun was going down, boy did it start getting cold.  Sure we are in the tropics still but at 4,050 metres, it gets cold at night.  It is supposed to drop to -4C overnight. 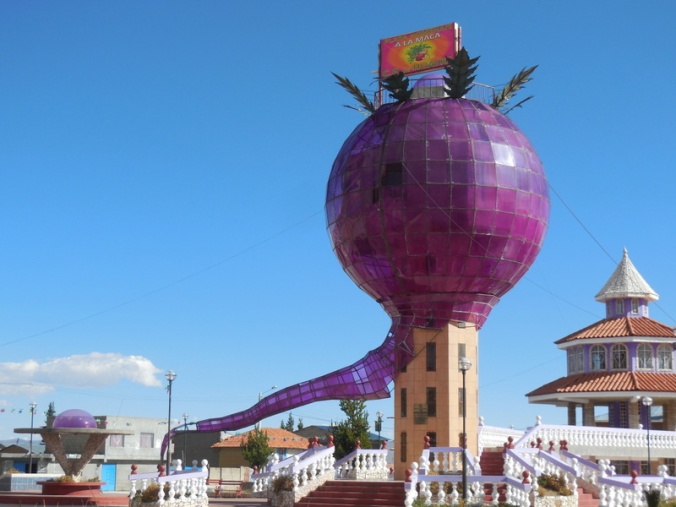 Giant beat root in Huayre – never did get the full story 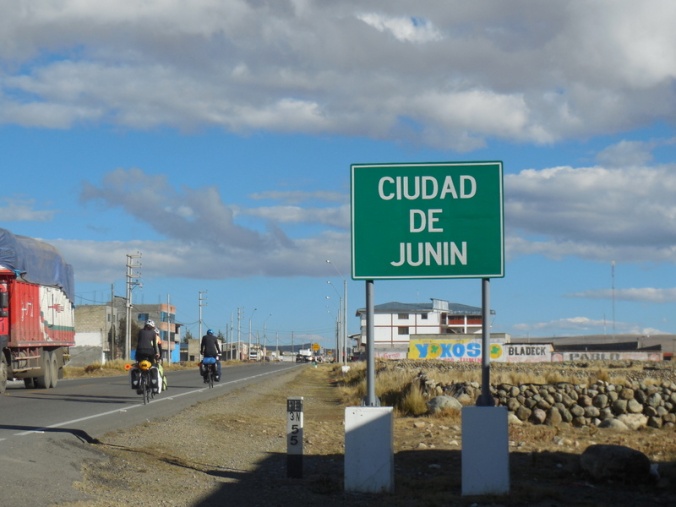 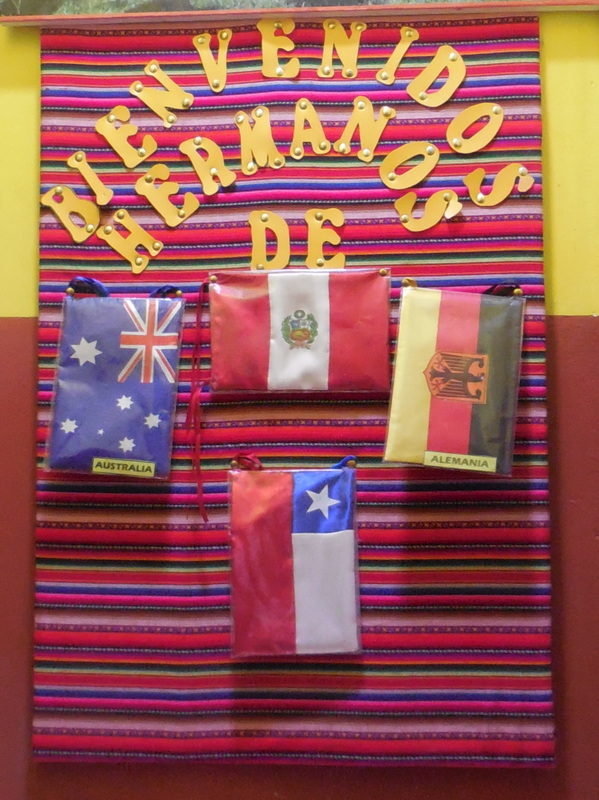 Aussie and German flags in our honour

Tomorrow we have a bit shorter day planned and more downhill than up – this is good news to my senior editor as she is struggling hard now to stay awake at 8:15.  The windows in our hostel don’t exactly seal out the night air so we’ll be keeping all the blankets on tonight and hitting the sack (formally) pretty soon.