This will be a short post.  We spent all day on the bikes, arriving at San Ignacio, Peru at 5:30.  My bicycle computer registered over 8 hours of moving time.

We only had 26k to ride in Ecuador this morning.  26k – simple..  It took us 5 hours.  Yes, you read that correctly, we covered 26k in 5 hours.  I think with a good pair of walking shoes I could just about do that on foot, who needs a bike?

Our morning pace was slowed considerably by the state of the road.  All 26 kilometers were rough and bumpy, dirt and rocks.  And it was mostly either uphill or down.  The downs were quite difficult because they were so bumpy.  The uphills were mostly very steep and sometimes unrideable.  Pushing a loaded touring bike up a rough, rock strewn goat track was the highlight of the morning.  I tried to stay just ahead or just behind Nancy – not quite in shouting range.  Choice words were offered on several occasions – not being able to completely hear them was to everyone’s benefit.

We both dumped our bikes over on the last downhill. The last ½ mile to the border was just insane.  I think the bikepackers, who were miles ahead of us by now, probably really enjoyed this bit.  Us, not so much.

The border was super quiet.  In both Ecuador and Peru we had to wake the immigration agent to get our stamps.  We had to fill out forms on both sides but it was very casual.  On the Peru side we could barely read the small print on the form and kind of ran out of time filling it out.  The officer said, “good enough” when we were about half way through and he was ready to stamp.  Ok – easy.  We got 180-day visas for Peru, just for asking.  Not sure that we’ll need them that long but what the heck.

It was an easy 6k to the town of Namballe where we knew there was a hotel.  But not a very nice hotel.  Being just past 12:30 at this point we made a snap decision to ride another 40k to reach San Ignacio.  We had to climb another 1,200 meters in this 40k but the road was so smooth (paved), it almost felt easy going uphill.

We ran into two French cyclists heading north nearing town but only stopped for a minute.  They were both super keen and wanted to talk.  We were both on our last legs and ready to be done.  Sometime after leaving Namballe my bike (I think the hub or BB) started making a right racket when I pushed hard.  We nursed it into San Ignacio and will have a proper look at it tomorrow.  We are taking a rest day here tomorrow for the bike, but also for us.  We are shattered!  No alarm, we only have to be up before 9AM for the free brekkie.

Our hotel, the Gran Hotel San Ingacio, is very nice.  Well within budget and has everything we need.  Right now, it has the main thing we need – a bed.  So I’ll end it there……………

UPDATE: something happened to this post, I’m updating it and putting all the photos at the end – shouldn’t post late at night when you are so tired….

Lots of army bases on the border

International bridge at the border 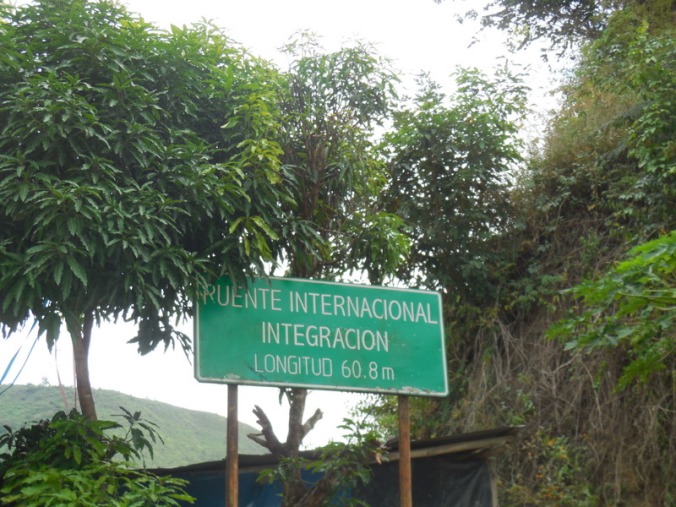 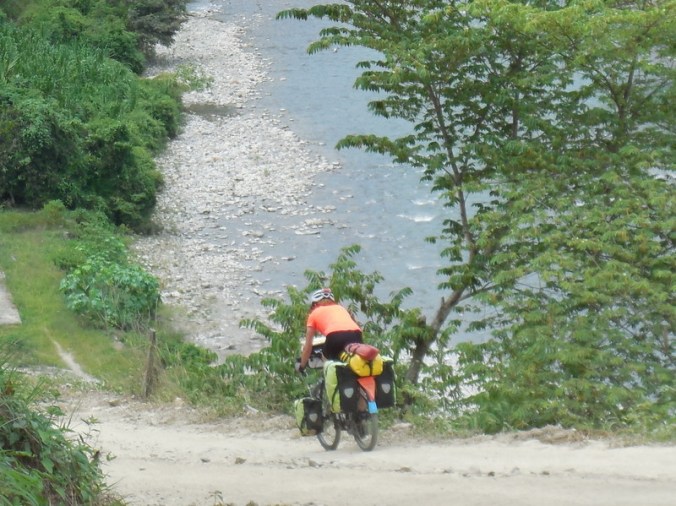 Nancy bombing the last hill, it was steep

The road we rode

Calm river at the bottom of one valley

Top of the last hill

Zumba the night before

Lots of coffee in Peru

Peru kids who “helped” me fix my bike