Today’s theme was dirt.  We knew that the road between Palanda and the border had some washouts and associated dirt sections. But the truth be told, the road was just dirt.  Sure there were heaps of washouts but mostly the last 35k, the road was simply dirt.  If not dirt, it was rocky and bumpy.  We rode on and off today with the bikepackers and they loved it.  At one point in the space of about 10 seconds, Hana said “dang, the dirt ended” and Nancy said “boy, I’m glad that is over”.  Guess it all depends on what you enjoy. 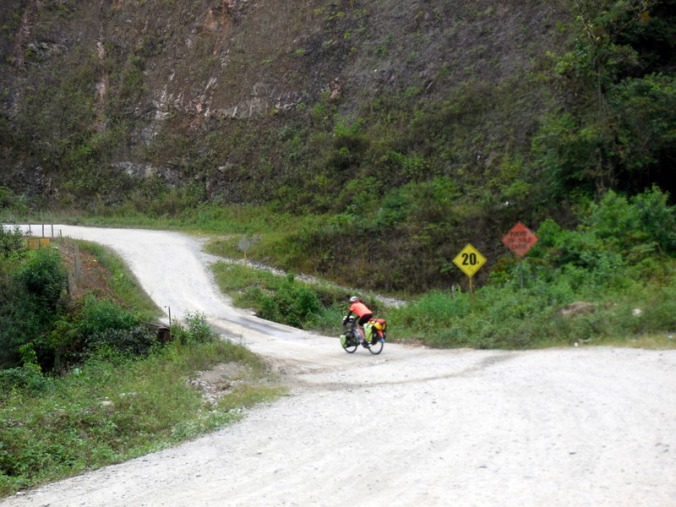 First dirt of the day – sign of things to come

The scenery was almost nice enough to make up for the jarring the road was causing, however, it’s really hard to look at the scenery when you are bounding downhill trying to miss the big rocks or crawling uphill, trying not to let the big rocks bounce your front wheel off the ground.  Mostly we were successful in keeping things upright but Nancy did come off once when one of those big rocks on the uphill turned her sideways tipping her backwards on the dirt, where she took a few rolls on the steep downhill.  I wasn’t too far behind and almost came off at the same spot – I’m calling mine a sympathy near-fall.  No major injuries, just a scrape on the elbow and some dirty spots on the clothes (so don’t worry Jan).  A policeman driving by stopped to ask if we were okay, which was nice but we were okay. 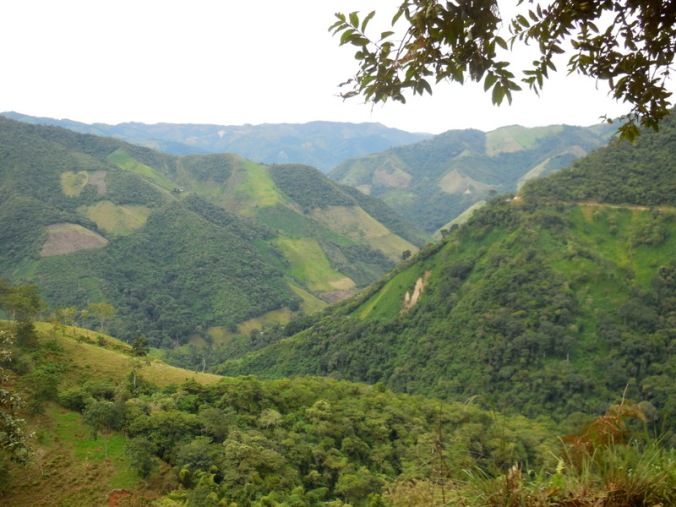 More crops to the ridge line

This was our nice, calm downhill start – paved!

More of what we rode early 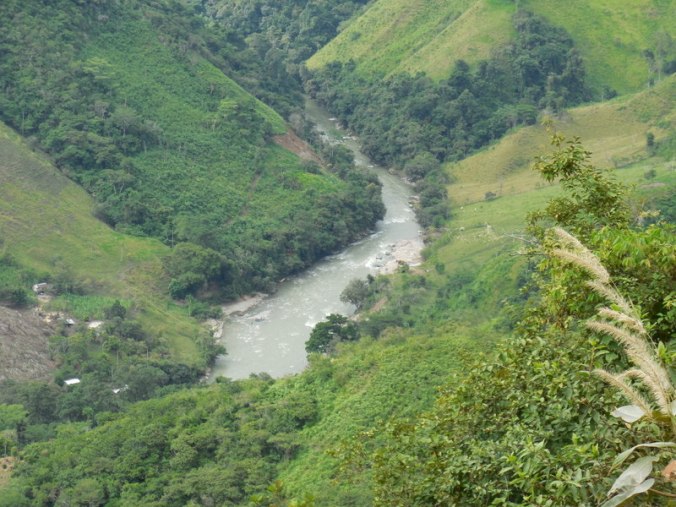 The road is rough in part because we are no longer on the PanAm and they just can’t keep up the maintenance here.  That coupled with a rainy season that must be just biblical means rough roads.  Nearly every hillside looks like it’s tried coming down onto the road at some point.  Road crews don’t seem to even bother getting their equipment out to clean slides unless they cover the entire road.  If slide covers one lane, they put up a few sticks, some “danger” tape and call it good – moving onto the next slide where they are really needed.

Giant landslide here – need the big gear to clear this one

While the road surface has been poor, the traffic has been stunning.  We’ve been leaving about 7AM and for the first hour, if it weren’t for the kids heading to school, there would be no traffic at all.  Once the school “rush” is over, we have long periods of time where we don’t see a car going in either direction.  There are a few busses about but nothing like we’ve seen on the PanAM or in the rest of Latin America. 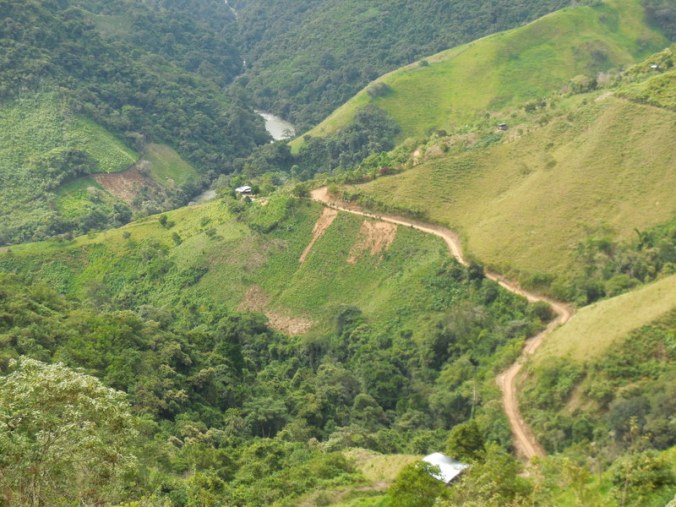 Not our road but a driveway to a river homestead

There is another obvious reason that the road washes out that I haven’t mentioned – that is, the grades.  We’ve had some crazy ups and crazy downs the last few days.  Both have been made worse by the lack of pavement.  The bikepackers have lower gears than us and have suggested that maybe we might want smaller chainrings.  Up until this point in the trip, I would have said no but the last two days, we’re having a rethink.  Not to mention that Nancy is still on her mental mission to cull all of our bags and at random points while climbing up a steep hill she will call out another item that maybe we could live without.  We may make another shipment home at some point.  For now however, we either have to bin it or carry on.  The odds of us being able to ship from one of these small towns is very low. 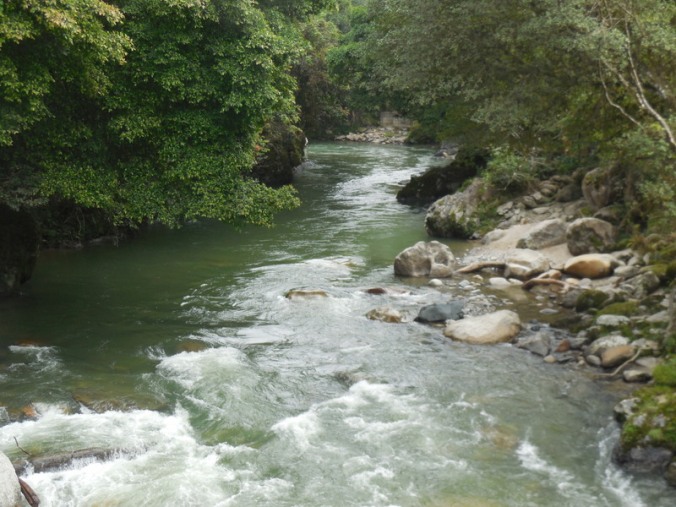 The downhills end at rivers, the uphills start at rivers.  It’s all calm here now.

If you can look up, the views are nice

And about today’s ride – we made it to Zumba, the last town in Ecuador.  They have a bust of Mr Zumba at the entrance to town, but the plaque has been damaged.  We have not been able to confirm if Mr. Zumba is one and the same with the guy who invented the Zumba dance/fitness craze.  I’m betting not.  The town centre had a giant ant statue, not one of dancers in leotards. 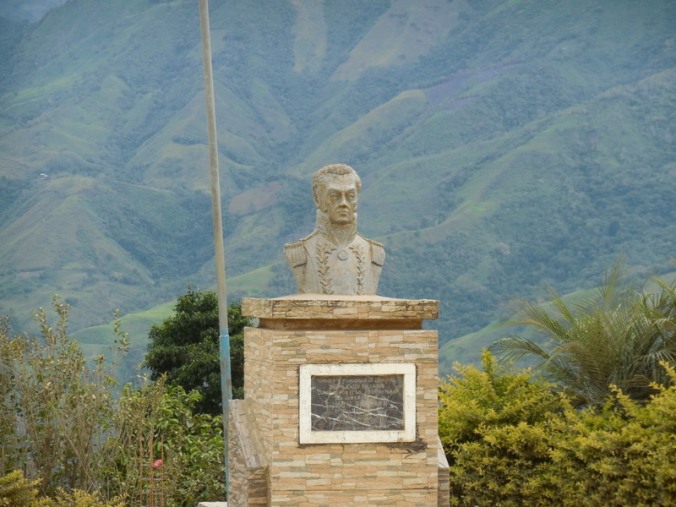 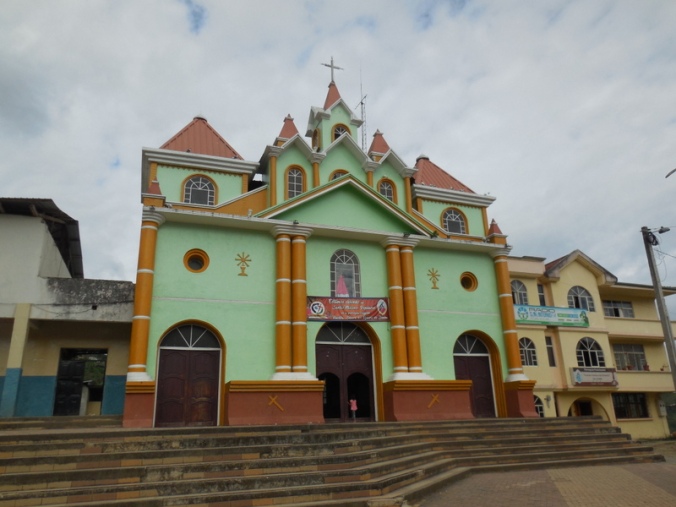 We are staying tonight in the Hotel San Luis.  It’s not fancy but we pushed the boat out and got a room with private bath.  We’ve come up with a new “trip rule”.  If anyone comes off their bike during the day, an upgraded room is in order.  But don’t get overly excited, upgrades in this part of the world are still only 1-star elsewhere.  We have hot water, a shower head and toilet seat – which is all you could want really…

Tomorrow we ride to Peru.  We have about 26k left of Ecuador to ride before the border and we know now that none of it is paved.  There are two climbs before the border – we hope that they are a little easier than the climbs today.  Two uphills means two downhills as well – on these dirt roads, I think sometimes the downhills are harder than the uphills.  We’ve heard rumours of Peru having silky smooth asphalt roads.  This could be true, but it could also be that people are happy for anything that isn’t dirt.  By the time we finish off the Ecuador section, we’ll probably feel the same way…