Happy Mother’s Day to all the mothers out there, and especially to our mothers.  We saved our favourite photo of the Pasto Mother’s Day cakes just for this occasion.  And just in case you were wondering, by late in the afternoon on Saturday, the bakery shops looked decimated.  All the extra racks full of Mother’s Day cakes were empty with the odd bit of frosting or cake crumb here and there.  It would appear that many mothers in Colombia get a sugary frosted cake with garish decorations for Mother’s Day – lucky them. 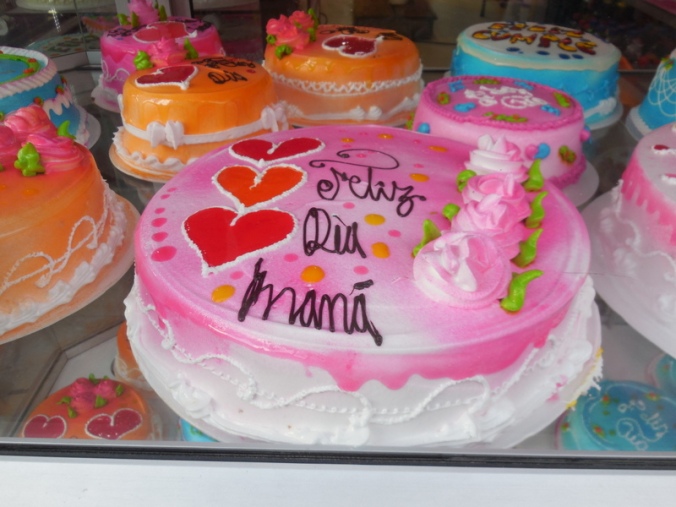 Our main tourist activity of the day was to visit El Sanctuario Las Lajas, or the church of Las Lajas.  Las Lajas was built between 1916 and 1949.  It is built on a site where in 1754, a mother and her deaf-mute daughter were caught in a strong storm.  They took shelter between two large slabs (lajas) of rock.  Lighting on the rock formed a shape which the woman took as an apparition of the Virgin Mary.  The image on the stone is still reportedly visible today – we couldn’t make it out in the back rock wall of the church but it was hard to know where to look and the church was crowded.

The church and its location is pretty amazing.  It is built over the Guáitara River in a neo-Gothic style and would not look out of place in Europe.  To find it here in southern Colombia, having never heard of it previously, is pretty cool.  Judge for yourself, I took too many photos, picking which ones to post was difficult.

And finally, the whole church 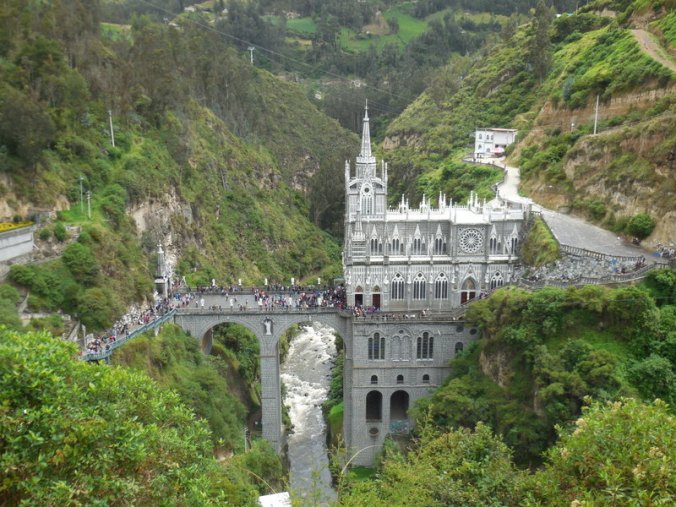 Hard not to take lots of photos of that

This one was earlier before the fog all burnt off

We visited the church on Mother’s Day Sunday morning. So needless to say, the 11:00AM service was packed.  We decided to not go inside the church until this all wrapped up.  Instead we crossed the bridge and climbed the far side to a restaurant where we had a second brekkie with a great view of the church.  While the church was mobbed, the restaurant was pretty empty.  I think the hike up to it was too difficult.  Many of the mothers visiting the church made a big effort to get there.  There is no lift, just a whole lot of stairs.  Some mothers looked like they wouldn’t make it.  Remember however, “fast” is not everything – the mothers went up and down slowly, often with younger family members holding an arm, but they made it. 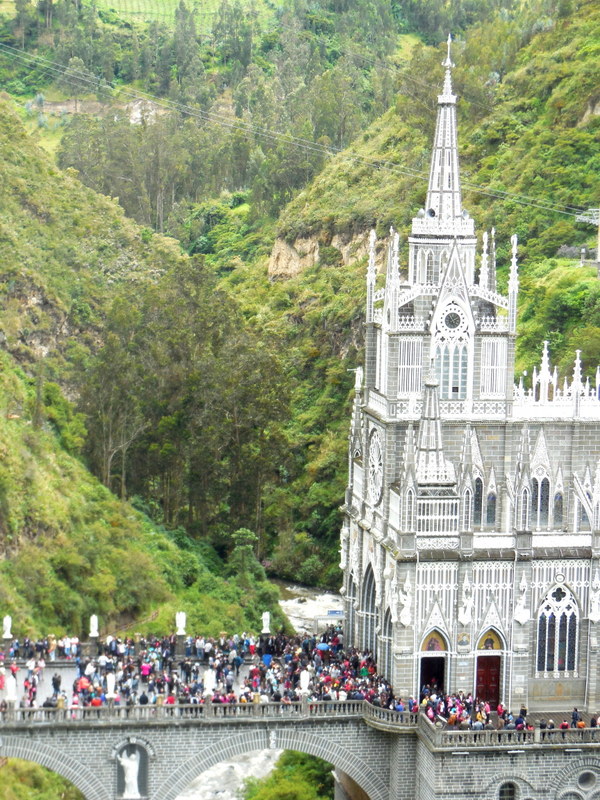 Inside, after the service, it was still packed 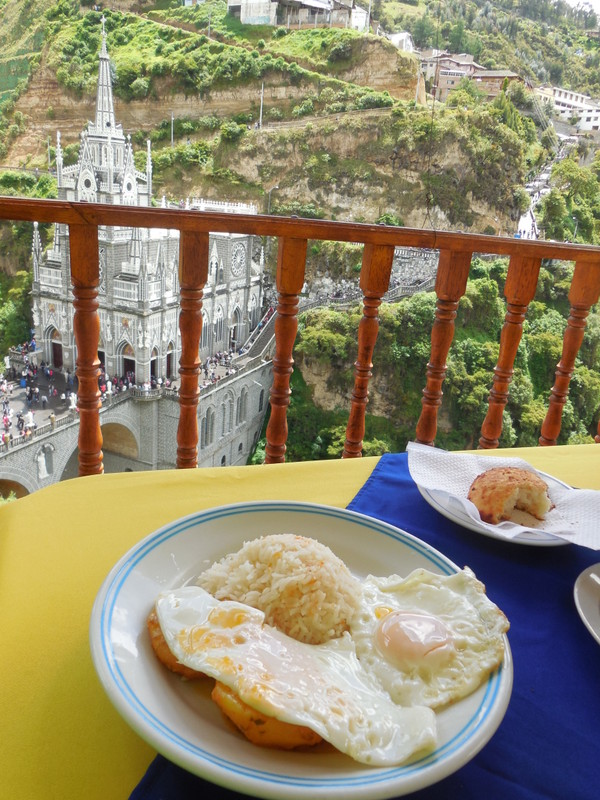 Second brekkie with a view

And for the tourists 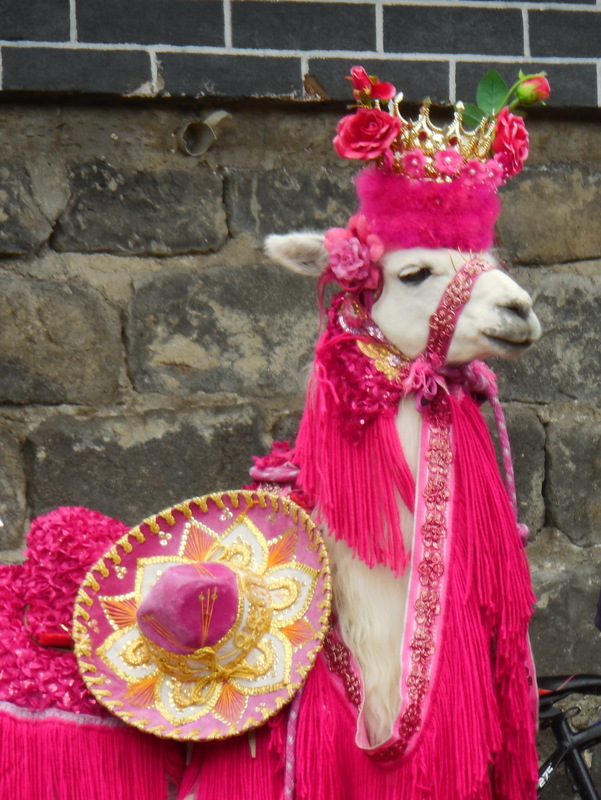 One more because she looked nice in pink

Once back from the church, we got focused on our second major task of the day.  We decided to try to get the border crossing formalities out of the way tonight, coming back and sleeping in Ipiales and then heading back across without having to go through the queues in the morning tomorrow.  We know other bike riders who did this two days ago and our hotel manager in Pasto says that people do this all the time.  It can still take up to 5 hours to cross the border but it is rumoured to be faster in the evening, or very early morning.

Well, wow that was probably the craziest border crossings we have done.  We went down to the ‘frontera’ about 5:30 and didn’t get stamped out through the Colombia migration office until about 9:00pm.  The actual immigration process took only a few minutes – the rest of the time was spent standing in line with hundreds of Venezuelans trying to find a better life in a new country.  We had a nice chat with a man who was travelling to Lima Peru and then on to Argentina where he had a job lined up starting in June.  The Venezuelans all seemed to be in good spirits despite leaving their homes and sometimes families and travelling long distances.  They also take care of each other on the road, watching each others’ bags and sharing food and drink.

We thought we had the hard part done once we finally got through Colombia immigration but when we got over to the Ecuador side we were dismayed to see that the line wrapped around the building and there seemed to be hundreds, if not thousands of people milling about.  We took our place in line, ending up right next to our friend from the Colombia side.  He spoke pretty good English and helped us with some translation issues.  After waiting another hour and barely moving in the line we ended up figuring out how to get in to be processed with a little translation help from our friend (unfortunately he had to remain in the line – the luck of the ‘right’ kind of citizenship and a strategically placed USD note – contact us if you want more details!).  Thank goodness for that, otherwise I think we would be standing in the line throughout the night, at the pace it was moving.

We were lucky to see a cab just as we walked back to the Colombia side and grabbed it and were home by 11:15 or so.  An amazing experience – hopefully one we won’t have to experience again!

So, tomorrow we actually enter Ecuador (for real this time).  Goodbye to Colombia and thanks for all of the great experiences (not including that last one!).