It is sort of hard to know where to start.  We are very tired after only riding 61k.  The thing is, 13k were screaming down an Andean mountain, the other 48k were crawling up those very same roads at all of 6kph.  We climbed almost 7,000 feet which is a lot on a loaded touring bike.  It took us 6 hours of riding time, which when you consider that the 13k downhill lasted less than 20 minutes, well, we were slogging it out most of the day going up.

But the scenery was stunning.  Yes, the riding was hard but much of the time we were looking out at one postcard view of the Andes after another.  We had a few clouds in the morning but more or less had sun the rest of the day.  I’m not sure that there is ever a completely clear day in the Andes so there were always clouds about but they never really looked like rain clouds.  And they contributed to making the vistas even more spectacular.  I don’t write well enough to give the views justice so I’ll just let my pictures do the talking. 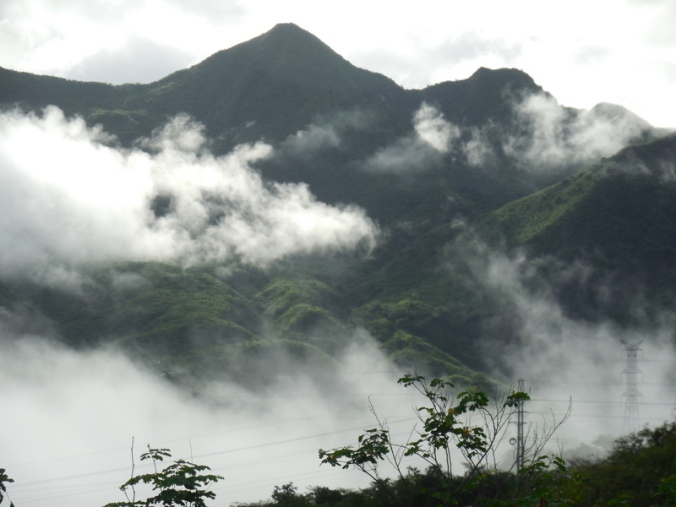 Further up the hill – a small village

Further up the views opened up 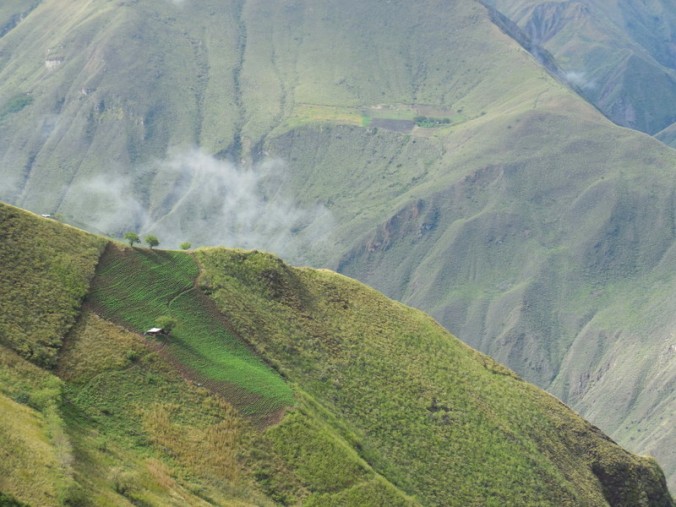 Home sweet home in the Andes 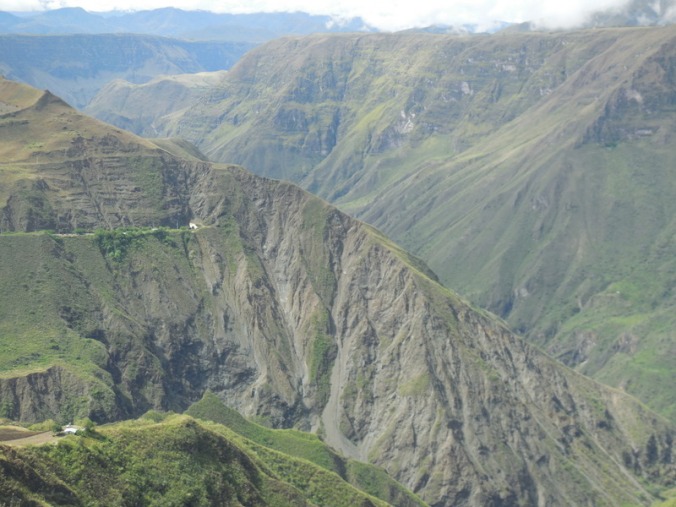 One of two tunnels we will ride through later

Not a road I’d like to drive a truck on 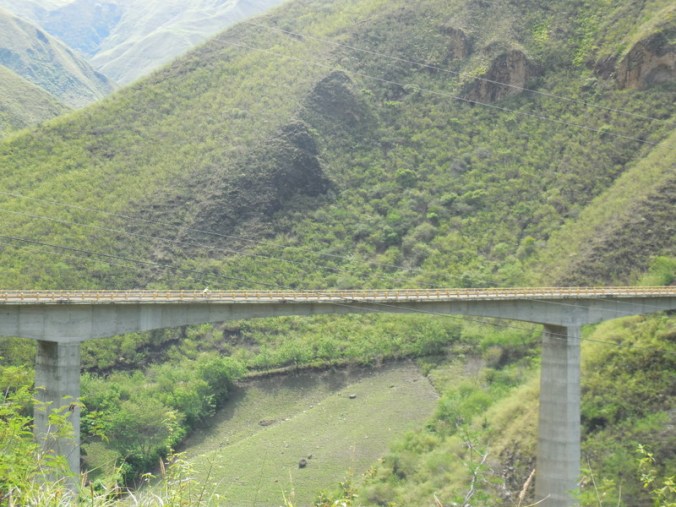 Nancy on the bridge – can you see her?

Up on the second climb 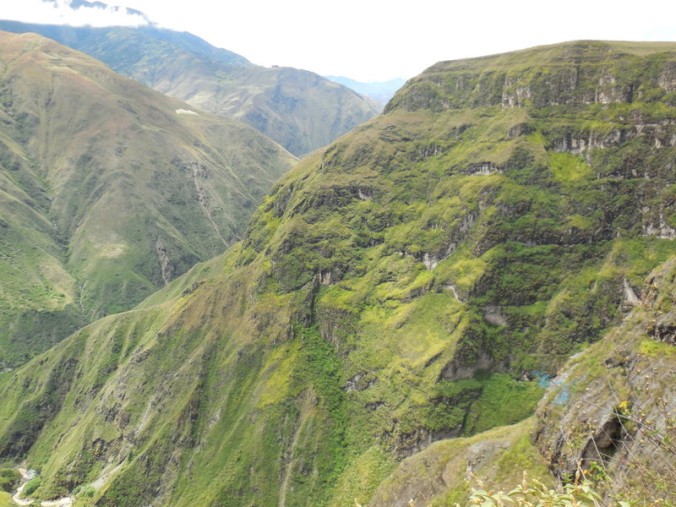 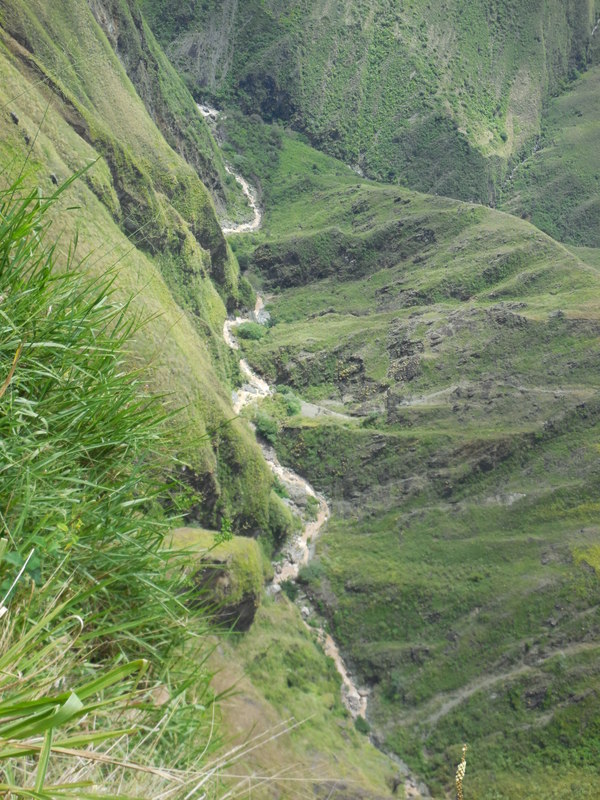 A river way down below us

And I should mention the rain.  We had about 5 drops in the last 500 meters and it bucketed down late in the afternoon after we were safe in our lodging.  I’m happy to report that our shoes stayed dry today.  That’s not to say that we were dry, far from it.  All that climbing had us sweating like dogs all day – our jerseys and shorts were soaked through.  Shifting our grip shift gears was hard because our gloves were saturated; headbands were overflowing early and often.  It was a wet day, even without the rain.

We were shooting for Chachagui and we made it.  As noted it started to sprinkle as we arrived.  We had a place to stay picked out but it involved riding down a steep hill and walking out tomorrow so we decided to try something different.  We are staying at the National Policia Sports Club.  It’s   funky place with a pool full of city officials swimming laps when we arrived.  We had to ring a bell at a big gate to get in but the people running the place were nice and set us up with a room, and cooked us lunch in the facilities kitchen after we got cleaned up.  Our room is ok though we were both chilled when we stopped riding and really wanted a hot shower.  Policia are tough dudes, they don’t need hot showers.  So, I guess that we don’t either.  Wow, that was a cold shower. 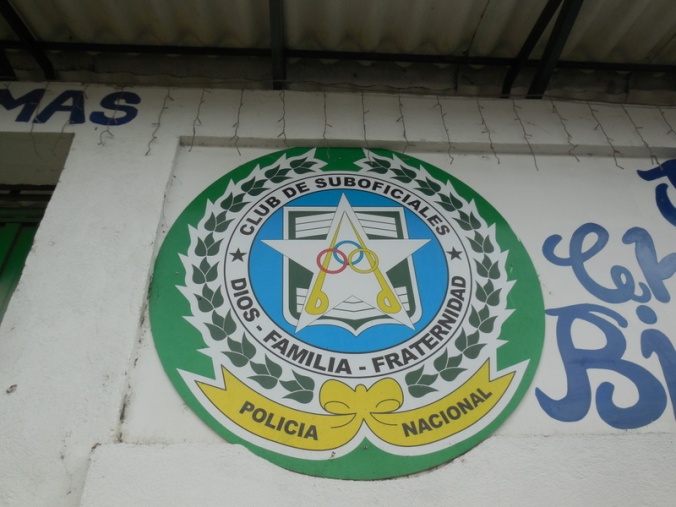 Showers with a view –  clouds now but when it burns off…

Hotel Julio Cesar – at the top of the first climb 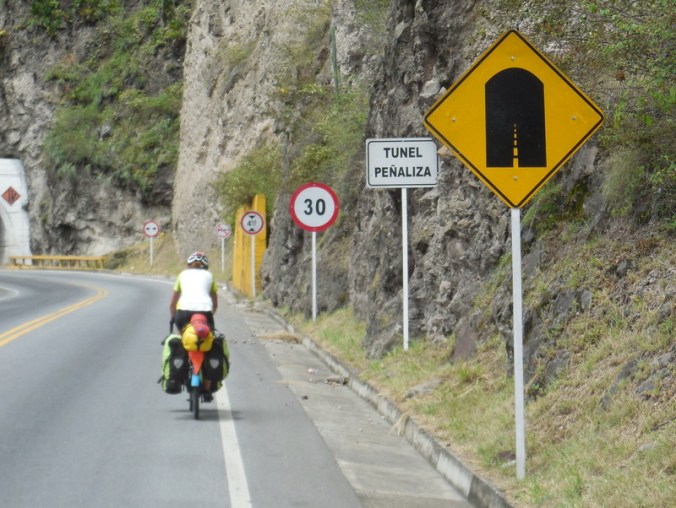 We wandered up to town for a look about and snacks for dinner.  Nancy is now passed out as I write this blog.  It was a super hard day full of amazing scenery.  One that we will not soon forget and one that makes doing this trip all the more worthwhile.  We are tired but we’ve lived to tell the tales, so it was a good day.  Make that a great day!

Tomorrow we finish the climb up to Pasto.  We have maybe 30k to ride and a good chunk of it is uphill as well.  We’ll have nothing like today’s climbing total and we plan on taking a day off there as well.  We’ll need to dig out fresh bike clothes to ride tomorrow as there is no way anything is getting dried out here today.  The late afternoon shower caused the humidity to shoot up and we have no fan or A/C in the room.  Rest day laundry is now a necessity.  I just hope the policia don’t run us down tomorrow morning after we leave for smelling up their room with our wet gear.

Just now, I’m going to give my senior editor a nudge – so that the typos in this blog can get corrected.  If you see this posted on May 9th (Colombia time), you’ll know that she was revivable.