We’ve had a nice quiet day here in Yarumal.  Being stationary gave us a chance to check out a couple topics that we’d been pondering the first week travelling in Colombia.

Our hotel is right on the main square and the brekkie room has a nice balcony where we could people watch.  Our first topic was men’s hats.  We’ve been seeing one particular hat quite a bit since entering the countryside.  It turns out that it is none other than the famous “sombrero vueltiao” hat from the Cordoba region.  Down in the low lands, this was the hat that 90% of the men wore.  Up here in the Andes, we see it but there are also more cowboy hats and a few Panama hats.

Sombrero vueltiao on the right

The other thing we’ve seen a lot of is “the man’s scarf”.  The scarf is folded in half length wise, then folded in half again in the middle.  Most importantly, the scarf is next draped across the shoulder of the dominant hand.  From here the scarf is used to wipe the sweat off one’s brow, to cover one’s face when riding dusty roads, to clean your hands after a meal and of course to swat your friend when you don’t agree with something they say. 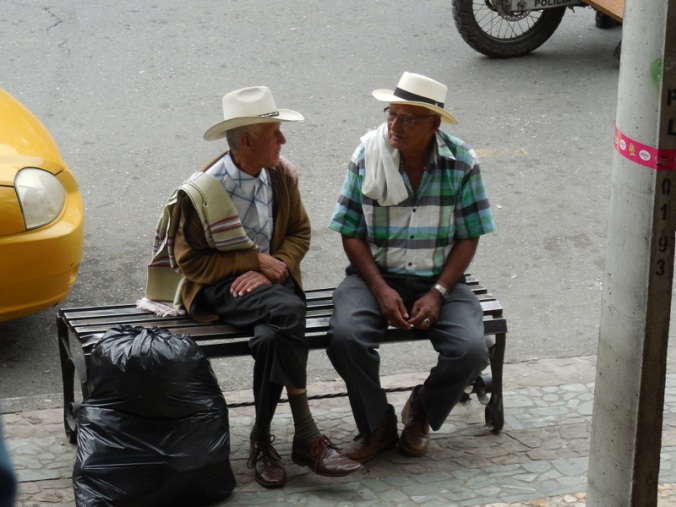 Next, there are the fruits here – lots of fruits that are new and interesting to us.  There are of course bananas, but its sister fruit the plantain is even more common.  Plantains are served sliced and fried as a side dish at just about every meal.  Yup, brekkie, lunch and dinner – you get fried plantains.

Tomate de arbol – or the tree tomato – it’s not really a tomato but it looks like one.  It is high in many minerals, iron , potassium , magnesium , phosphorus and vitamins A, C and E.  It is used mostly in sweet deserts and juices.  We haven’t actually had any yet but it is on our list of things to try.

The guanabana is very common here – a spikey fruit that’s pulp is used to make fruit nectar, smoothies, fruit juice drinks, as well as candies, sorbets, and ice cream flavorings.  It is also high in many minerals.

There is a red pineapple here that they call an apple pineapple – red on the outside, yellow on the inside.  Other than the outside, this is pretty much the same as a yellow pineapple.  It just looks odd when you see them. 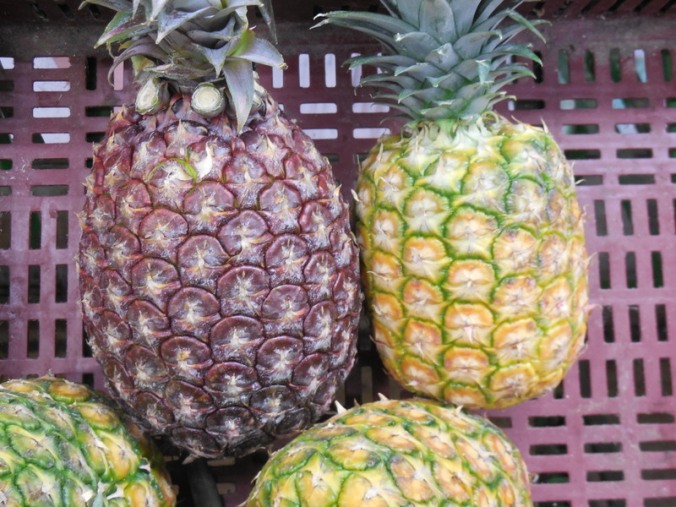 Maracuja fruit is common here – it is just a passion fruit but it has a different name in Spanish.  When I saw these in green, I thought passion fruit but wasn’t sure.  We find this all the time.  The same things exist, they just call them something different, making it hard for us to follow conversations or read menus.

Onto the buses. We are starting to see those famous no door Andes chicken buses.  They fly past us way too fast for photos or study.  We are near the main square here in Yarumal and there are buses on nearby streets.  We went out to have a look and get some photos.  Up close the buses are really hard looking, there is nothing first class about riding them.  They are used to haul cargo and people.  And of course, they all have some form of flashy paint on them.  We’ll have to do more research on the paint because there just has to be more to that story. 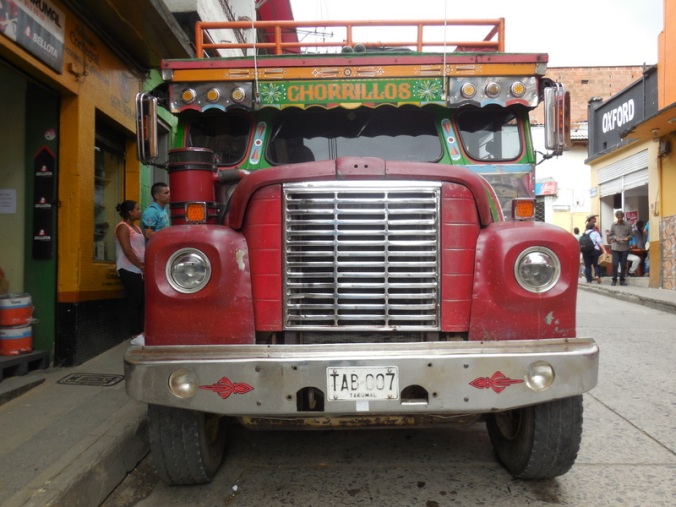 Our next stop was the bakery.  So far in Colombia we’ve posted about bunuelos and pan de queso.  Here in Yarumal we’ve found a good number of bakeries and also discovered that there are many different forms of pan de queso.  In fact, just about everything in some bakeries has cheese in it.  Who am I to argue about cheese and bread?

Bunuelos – hot from the vat

Last but not least, Yarumal is famous for its cathedral at the top of the park.  It’s a hard church to photograph as it sits so high above the square and today we didn’t have bright blue skies to frame the image.  The cathedral is not “that” old, having been built in 1860.  But then again, Yarumal was only founded in 1787. 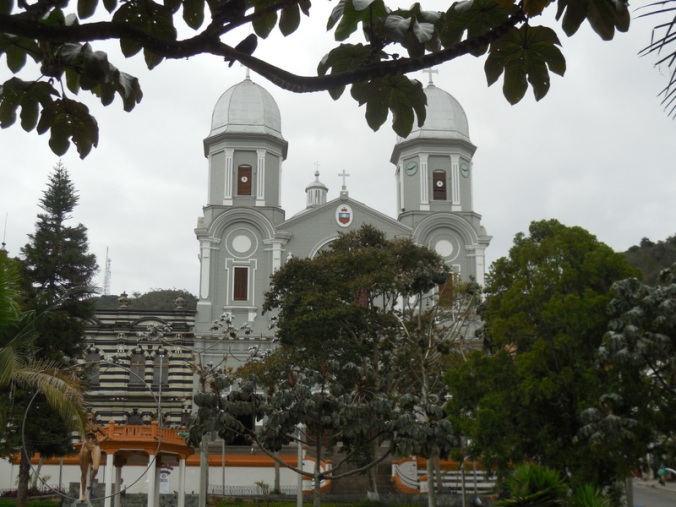 From our brekkie room

Inside during the day time

Church door, Nancy looking to the Andes for inspiration 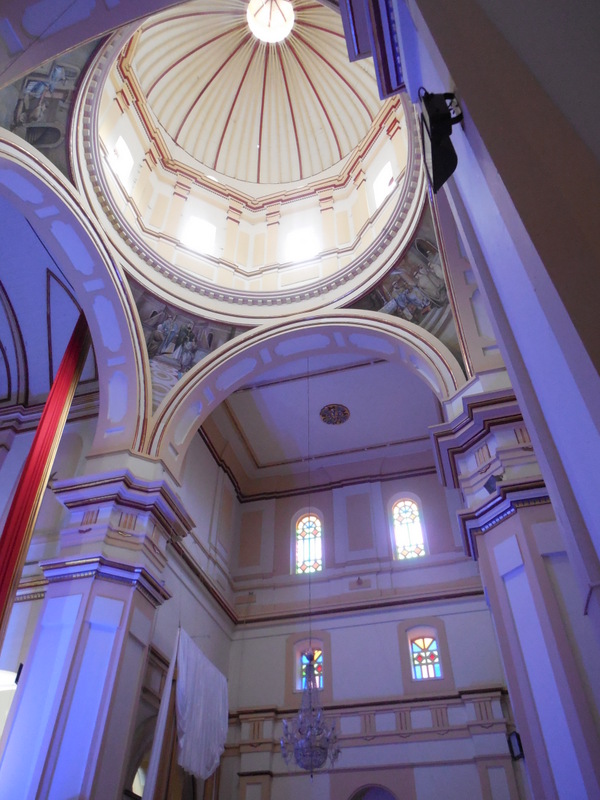 Towns in Colombia have such a wide range in age.  Two days in a row we’ve stayed in towns that were founded 250 years apart.  The really old places here and in Central America were nearly all founded by early Spanish conquistadors, or the clergy that followed them.  Or at least that’s the story you read – there’s probably a good chance that indigenous communities were there long before.

Tomorrow we have another uphill day.  We’ll finish at close to 8,400 feet after another 4000 day of climbing.  We are both happy to have had the day off today – old legs needing the rest.  We’ve both worn long pants, shoes and socks today –it is much cooler up here and will probably be cooler yet tomorrow.  Nancy is talking about ditching her sleeveless riding jersey for the day, first time in probably 2 months.  The forecast is rainless – fingers crossed.

5 thoughts on “Yarumal hats, fruits, buses, bakeries and a church”