We’ve settled into Cartagena and are liking what we see.

First a bit of history.  Cartagena was founded by the Spanish in 1533.  In its heyday it was arguably the most important port in the Americas for Spain.  It was used to funnel mineral wealth from the inland of Peru, plus it also served as the main port for the importation of African slaves   It had strong natural defences but was overrun several times by various foreign backed pirates – there was so much wealth being created that the French, the English and even the Dutch had a go a taking over the city.  Spain fought back each time.  Over time a walled city was constructed and things settled down.

The ramparts that were created to make the city safe enclose today what is known as old-town.  There are two sections to old-town, El Centro and Getsemani.  Most the El Centro is 3 to 4 story buildings – it was the rich and administrative section.  Getsemani has more one story buildings and was where more working class folks lived.  El Centro is more refined today, has more up market hotels and shops.  Getsemani is more edgy, has more buildings that are in need of significant updating and for sure a more ‘lively’ crowd as nightfall sets in.  We are staying at the Zana Boutique Hotel in Getsemani but we feel more than safe.

Having learned that Cartagena was the centre of the slave trade helps explain why we are seeing so many folks with darker skin than we did in Central America.  The Spanish language spoken here is a little different than what we’ve been hearing but our Spanish is so bad that sometimes it seems like it wouldn’t matter.  We always need to get folks to slow down and repeat things.

We’ve been running around trying to get food, bike parts and stove fuel.  We’ve done well on the food side – even finding peanut butter.  The bike parts search has been less successful – Nancy needs a replacement kickstand and we are on the lookout for new touring tires.  We’ve found neither and will continue on with what we have.  Neither is urgent but both will need to be sorted out at some point.  Gas for our stove is non-existent in Cartagena but this is not too big of issue as our stove burns unleaded gasoline just fine.  I’d rather burn white gas, as it is cleaner but unleaded fuel it will have to do. 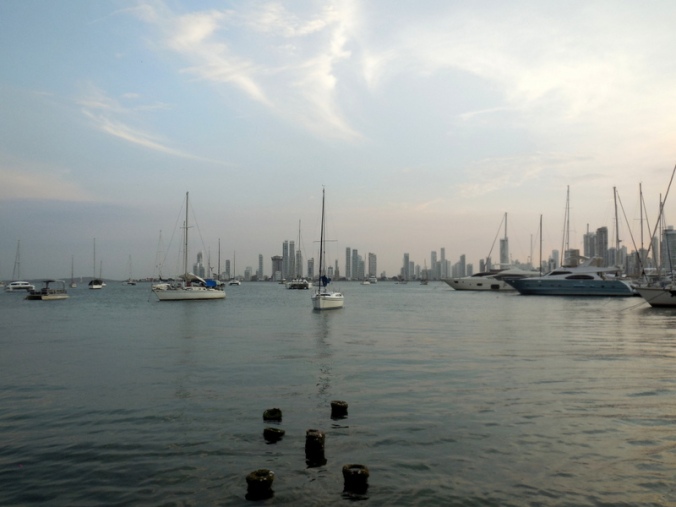 City view as we were running about 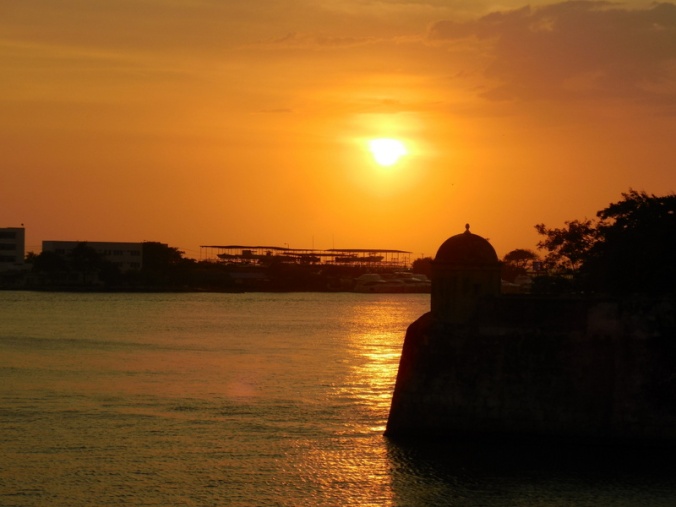 We also need filters for our coffee maker – an Aeropress.  We only brought 100 or so on the trip and are running low.  We found a coffee shop that makes Aeropress coffee but they didn’t sell the filters.  One of the baristas, Julian, spoke English and listened patiently to our story.  He is going to bring some filters in from his personal supply that we can pick up tomorrow.  He can re-order them as he has a home and shipping address.  We can’t re-order and receive shipped items (like coffee filters or bicycle tires) so this not an option for us.  Thanks Julian – cheers mate!

The cafe where Julian works is called Epoca.  They roast their own coffee and serve great food.  We’ve eaten there twice and had good food both times.  Yesterday I tried the blueberry and cheese toasted sandwich.  I’ve never had a blueberry sandwich before – it was pretty good but I’m not sure where they source blueberries here in the tropics.

Green and red eggs at Epoca – also different and good

This morning we went early for a walk on the city ramparts.  You are supposed to go out early to beat the heat.  We got out sort of early, and didn’t beat the heat.  We walked about ½ the ocean side rampart and called it good.  It is over 30 but the humidity is really high also.  My shirt was drenched.   I think that I am sweating more than Nancy these days – either that or my shirt is “just the wrong colour” and it shows more.

Nice thoughts on this wall painting

Kids out mucking about in the sunset – same everywhere 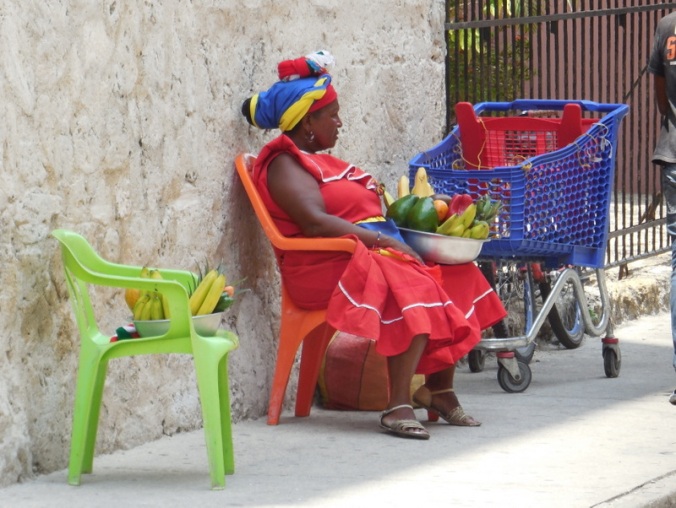 We are here for one more day and then head south.  For the geography geeks reading, we are currently 10.41 degrees north of the equator.  Almost two weeks ago in the very beginning of Costa Rica, we were further south – which seems just odd to me.  Costa Rica and Panama both run more east/west than they do north/south.  And to reach Cartagena from Panama City, we had to fly north again.  This all seems a bit weird to me but from here for sure, we head south.  We’ll be working out the exact route, relaxing and buying those last few supplies tomorrow – with an early Thursday morning departure planned.  South America awaits – we are excited to see what it brings us.

8 thoughts on “Cartagena in brief”