If you’re like us, you probably envisioned a road called the Pan-Am Highway running the length of Central and South America.  Truth is, there is a 100 km break in the highway between Panama and Columbia.  And we are not talking about a transition where the highway becomes a small country road.  We are talking about a place where there is no road whatsoever.

The area is formally known as the Darien Gap.  There are no connecting roads.  From what we’ve read, there is jungle, bandits, drug lords and head hunters.  I’m sure that it’s not that bad but getting across the gap on a bicycle is nearly impossible.  We’ve read about a few bike packers who, using a series of native guides in dugout canoes, edgy drug lords in broken jeeps and a few helpful missionaries managed to cross the gap.  For us, this was a wee bit more adventure than we signed up for.

So to get across the gap you have two choices.  The first is flying – there are direct 1 hour flights from Panama City to Cartagena Colombia, or several other Colombian cities.  The second option is taking a boat.  By boat, I don’t mean high speed hydro-foil ferry, but rather a good old fashioned sailboat.  With the boat you spend 5 days, with a couple crew persons and a handful of other travellers.  There are two boat routes, one that cuts across the Caribbean and one the hugs the coast.  The latter sails through the San Blas Islands.  The fun factor on the boat depends on how well you mesh with the crew and other travellers, along with how smooth the seas are.

A couple years ago I decided that I needed to learn to swim, just so that we could have the option of taking a boat across the Darien Gap.  I won’t say that I’m a great (or even good) swimmer yet but I’d give the boat a go if Nancy were keen.  Well, Nancy isn’t keen.  She swims great but doesn’t love boats.  The three hours we spent putting around the mangrove swamp a few days back was more than all the time she needed bobbing on anything.  We both also fear getting stuck on a boat full of “youngsters” wanting to party for 5 full days.  So we are flying.

We’ve spent the last two days trying to get ready to fly.  That means visiting 7 bike shops to find boxes to pack the bikes – and now the next few days packing them.  I’m sure glad that our bikes have S&S couplers – I just have to break them in half and don’t have to remove racks, mudguards and wheels.  All my former-life business travel gives me status on Copa Airlines so we should have plenty of baggage allowance, if we can get some big cheap bags to pack our panniers into.  Another project for a few days…

Needing a break from packing tonight we headed out to have a drink and catch up with Manya and Martin.  They are two Swiss cyclists that started in Anchorage and are also headed to Ushuaia, Argentina.  We met them for the first time four months ago in La Paz, Baja.  We’ve been getting tips on the road ahead from them for the past three months and finally we managed to catch them here in Panama City.  They are taking the boat to Colombia and we hope to meet them again in Medellin or further south to compare notes.  Drinks tonight were up on the top of a hotel roof bar – with nice views of Panama City. 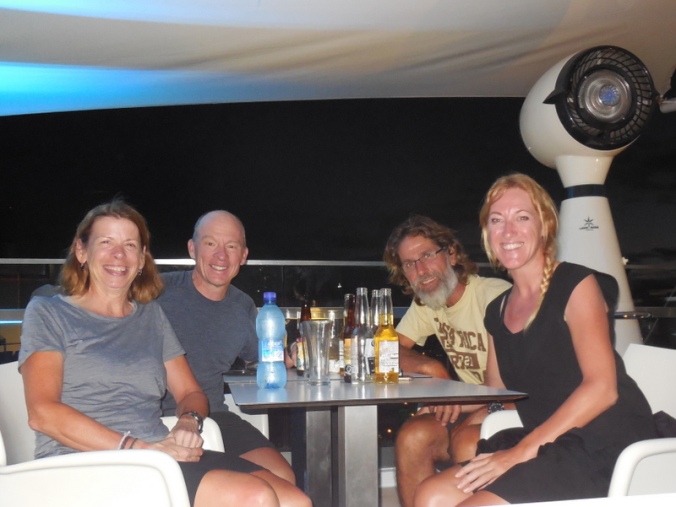 The city at dusk

More of the city

Close up of super cool skyscraper here in Panama City

We are enjoying our break here in Panama – even with all the packing and organizing.  More tourist activity and Panama stories in the next few days.

7 thoughts on “The riddle of the Darien Gap”