Today was another transit day along the PanAm highway.  We were actually ready to roll this morning before it was quite light enough.  We changed time zones when we entered Panama so it doesn’t get light enough to ride until after 6 or so.  We’re not really game enough to ride in the dark – too many crazy drivers and unknown road conditions for us.

Yesterday morning we had nice calm weather for at least a couple of hours before the wind picked up.  This morning we weren’t so lucky – we had a headwind already when we left our hotel.  Given that the wind usually picks up later in the morning as the temperature starts to rise it wasn’t a good sign.  We had about 40k of the same direction until we reached the city of Penonome.  I am sure Dave would tell you a different story but the truth is I spent most of that of time at the front, letting him draft me.  This was despite Dave accusing me of gutterballing him by riding too far to the right in the shoulder so he had to ride too far over.  Thankfully at Penonome we made a 160 degree turn and got a nice tailwind for the next 25-30k or so.  Boy did that feel nice.  And it was a slight downhill, which made it even better.

Translates to King David – yes, King for pulling into the hard wind the most!

It’s clearly windy in this area much of the time, as we passed by a pretty large wind farm, with all the turbines turning.  We stopped at a service station just after Penenome for morning tea, where we had cinnamon rolls that looked appetizing but turned out to be rock hard.  We ate them anyway – can’t be too picky on a long Easter weekend when lots of shops are closed.  We think that alcohol sales are prohibited or at least limited this weekend – we have seen official-looking signs posted at several stores.  Today at one little hole-in-the-wall store we stopped at for cold drinks there seemed to be a brisk trade in beer, but only people who seemed to have some inside knowledge about the sales and only in limited quantities.  It was funny to watch people walk into the store and do some kind of secret nod with the shop owner, who happened to be a Chinese woman, to get their beer.  We stuck with non-alcoholic drinks, mostly Gatorade – I know, kind of boring. 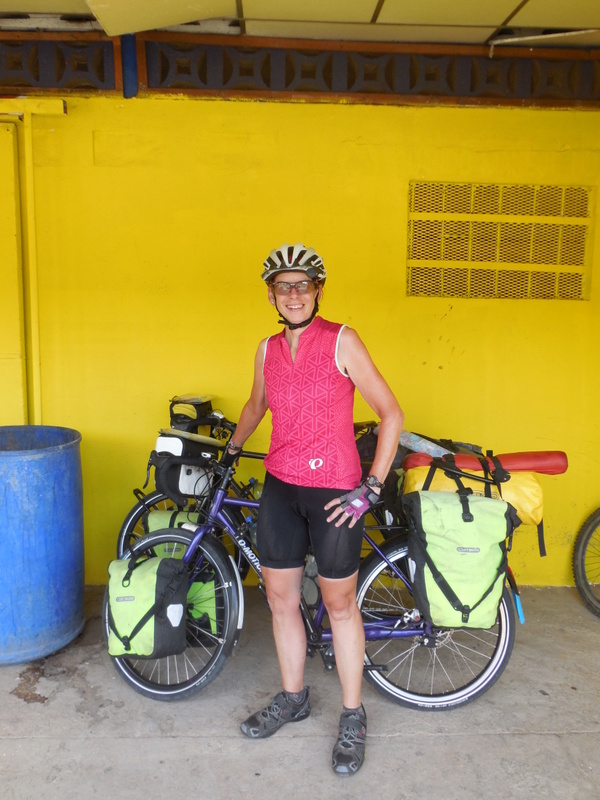 Nancy in her yellow period – at the Chinese market

Seen at morning tea – yeah, I’m not sure either

At one point we passed a nice looking well-kept manufacturing plant that turned out to be a Nestle plant.  It looked like it was producing milk products – there were lots of advertisements for evaporated milk painted on the concrete walls around the plant.  Just down the road from the plant there was kind of a strange little farm/playground that had lots of animal structures built out of hay bales – some of them looked a bit evil almost!  There was a small sign on the gate that said it was a Nestle prototype farm – maybe some kind of community-relations exercise or something.

We made it to Palmar beach about 12:30, not really sure where we would end up.  This is a real surf beach area, and because it is pretty close to Panama City it gets lots of visitors on the weekend.  As it is the Easter long weekend we figured most places would be booked up.  As we came down into the beach area we found a guy manning a parking area that seemed to know about all the rooms around.  He first said they were all full, but there were some beds at a hostel across the street or there was camping on the beach but not until 6pm.  Then, as Dave followed him to go see the hostel he stopped to talk to someone else and it turned out there would be a room available at the hotel that was part of the surf club later in the afternoon. 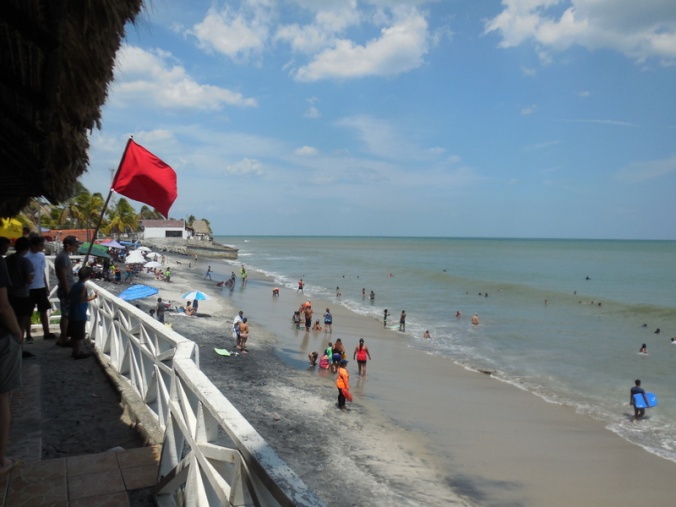 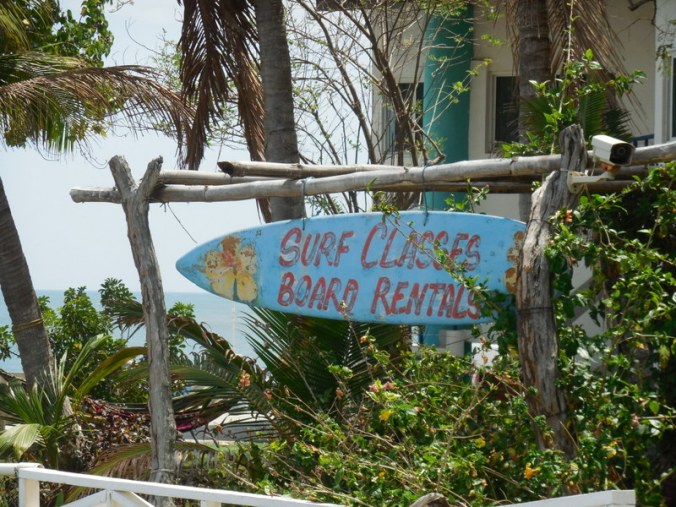 Tempting – no not really – haha 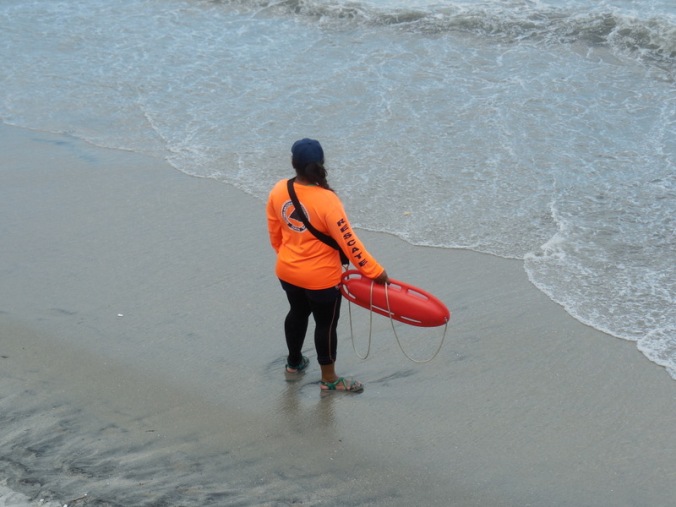 Panama’s finest on the look out

So we hung out at the open air restaurant, ate some hamburgers and finally got into the room about 3pm.  It’s okay, probably not really worth what we had to pay but it is Easter weekend so we couldn’t really complain.  It has an air-conditioner, shower, toilet seat, pretty comfy bed and TV that gets English movies.  I suspect it may get pretty loud around here later – we can already hear the music from several places nearby.  I guess that’s what happens at the beach on a long weekend. 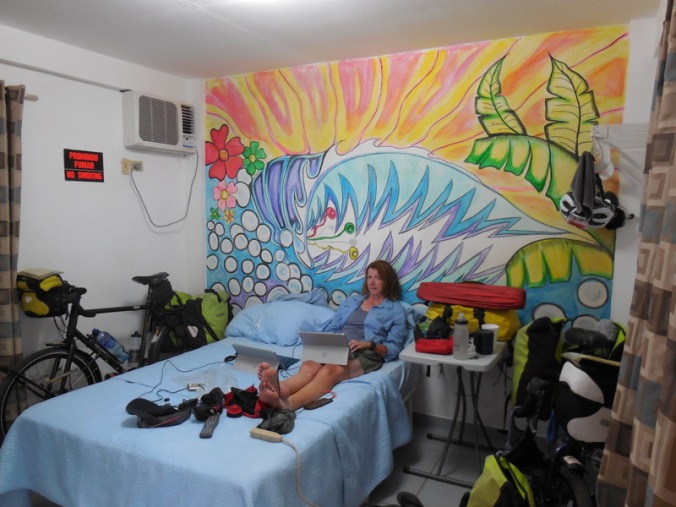 Our room – complete with beach mural

Kids playing in the water

Tomorrow we will head to Panama City, crossing over the Bridge of Americas.  It sounds like traffic back into the city may be bad tomorrow afternoon as people head back after a long weekend.  We are planning on leaving as early as possible so should hopefully be over the bridge by noon but if traffic turns out to be too bad we may stop somewhere short of the bridge and wait until tomorrow.  We’ll just play it by ear.