Sometimes (ok, most of the time) when the alarm goes off at 5am I think ‘It can’t be time to get up already!  This is crazy, getting up so early every day when this is supposed to be a holiday’.  Well, okay, maybe not a ‘real’ holiday but really, I could have kept working if I was going to be up with the birds every day!  But, I continue to be surprised by how many people are up and moving about already at that early hour, out on the streets and in our hotels.  At least it means we don’t have to tiptoe around while we pack up and make breakfast – but it still feels pretty early to me!

Today we had a bit of a schedule for the first time in a while, as we wanted to make the 12:30 ferry that would take us across the Gulf of Nicoya back to the ‘mainland’ of Costa Rica.  We had about 75k to go to the ferry and Dave checked his tire first thing this morning to make sure he didn’t have another flat – he declared it fine to ride.  But about 3k from the hotel he called out that we needed to do a pump up – uh oh.  There seemed to still be a slow leak but the top up did the trick until a drink stop later on, where another top up was required. 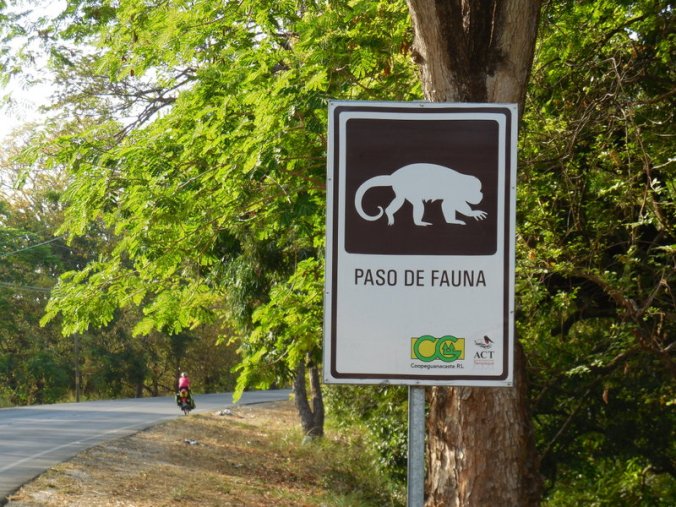 Tree of the day, forest bamboo – or is bamboo a grass

The ride out to the end of the peninsula was nice and calm, with little traffic and a good road.  We continued to pass through mostly farm and ranch lands – lots of cattle but also fields of melons and cane.  Thankfully the road was lined with trees much of the way, which gave us some welcome shade.  The Costa Ricans have an interesting way of using trees to act as fence posts.  There appears to be a particular type of tree that they use, planting them relatively closely spaced, and using the tree trunk to hook the barbed wire that forms the fences.  Many of the trees have clearly been trimmed multiple times, with the trunks quite large and a top with some branches valiantly trying to grow.  They look quite funny – a battle between man and tree, I think!

One of the many fences

We heard lots of howler monkeys again today on the ride, and could see the brown blobs in the trees above us.  You can’t help but smile when you hear them.  We saw lots of iguanas as well, but most of the other animal life was the standard cow and horse.  There wasn’t much ‘wild’ land along the way – almost all of it was fenced and looked to be occupied and/or used for farming or ranching.

Interestingly, Costa Rica doesn’t seem to have lots of little tiendas along the road like we have seen in other Central American countries.  We don’t have near as many opportunities to stop for cold drinks – you almost need to be going through a more substantial town to see a store of any size (or a gas station) where you can pick up cold drinks.  We did find one gas station today with a store to get something cold to drink – it doesn’t take long for the water in our water bottles to get warm!

Runner up trees of the day – strangler figs growing on themselves

We made it to the end of the peninsula where the ferry port just before 10 – a little early for the 12:30 ferry!  Thankfully there was a restaurant/bar just above the ferry departure area so we bought a huge bottle of ice tea and sat there for 2 hours, enjoying the shade and the breeze and the brightly coloured birds around.

View from our table 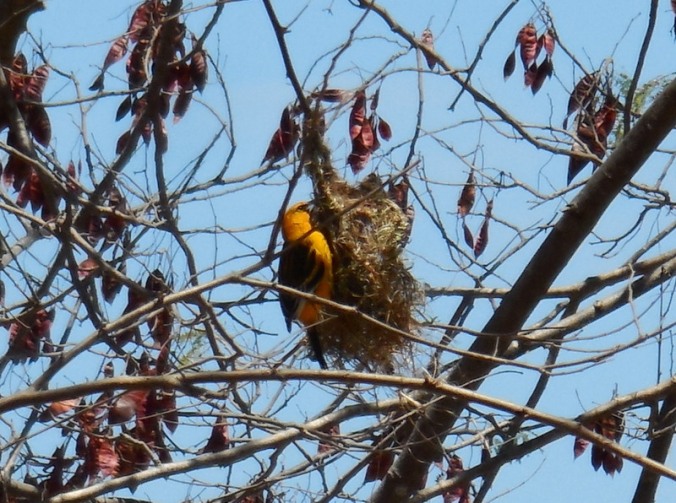 Eventually we made our way down to the ferry, bought tickets and boarded the ferry with the rest of the passengers.  The ferry wasn’t big, with open seating (open to the air) and some seating down below which I think was probably air-conditioned.  After most of the cars were loaded we watched this massive truck work its way around the sharp turn onto the entrance ramp, almost tipping its load of hundreds of bags of salt in the process.  Somehow it made it, taking up all of the rest of the room on the ferry deck.  All of those bags were uncovered and just resting on the flatbed truck – there was only one strap on the whole load, way at the back over one row of bags.  Pretty amazing. 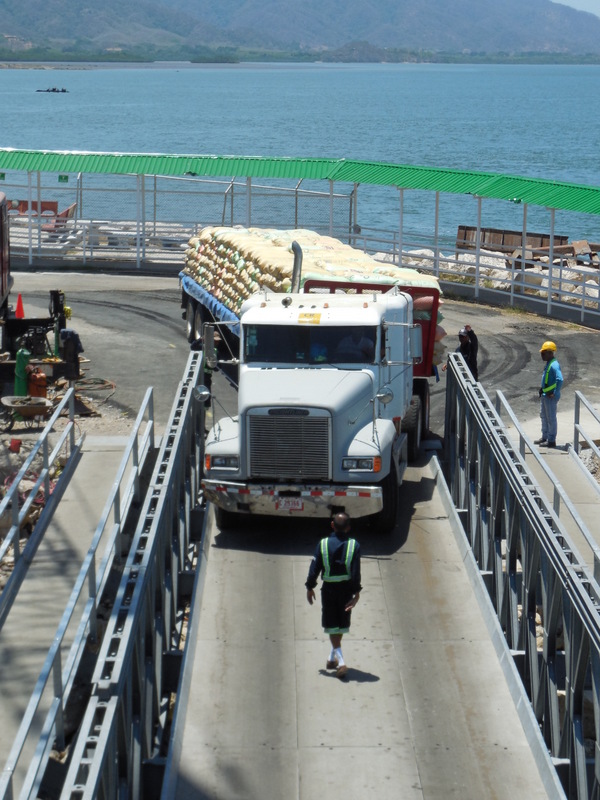 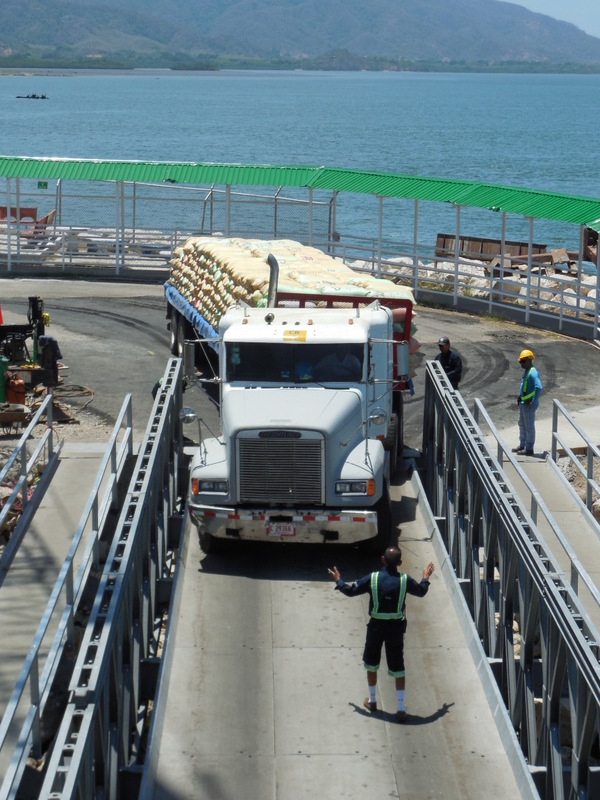 The ride was pretty short, just over an hour, so we were soon at the Puentarenas dock.  We made our way into town and stopped at the first hotel we knew about from other cycling journals.  It happened to be right by a creperie that also did coffee so we stopped in to have a cold coffee drink while trying to figure out what to do.  Dave walked around to check a hotel on the other side of the block – no luck, no vacancies.  So he checked the rooms at the Cabanas Yolymar, where we were at, and came back and said we were good to go. 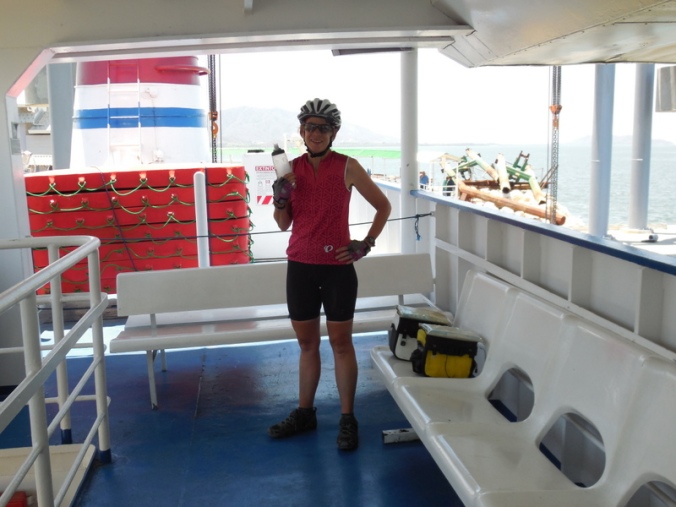 After we got everything into the room Dave took another shot at his tire, and ultimately found another wire that seemed to be causing the problem.  Hopefully that will do it – those wires are pretty nasty.  He jumped into the very tiny pool as a reward before finally getting a shower. 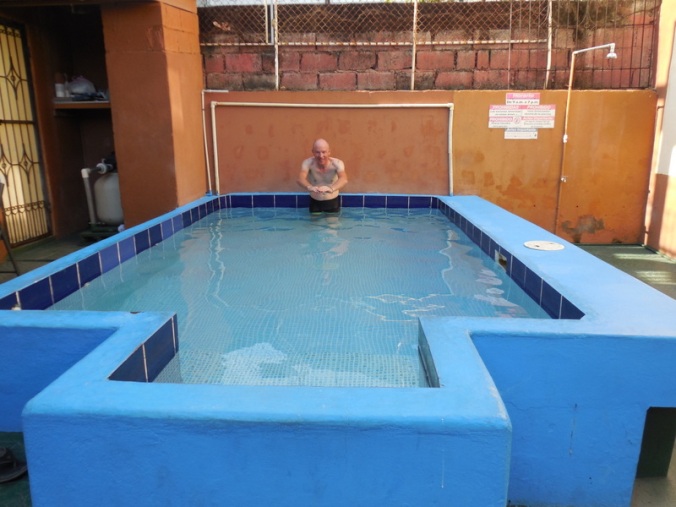 So, here we are, relaxing in our air-conditioned room.  Dave was a champ and went out to search for food and water and came back with the makings for egg and bacon rolls.  There appears to be a kind of communal kitchen area near the pool – at least we hope it is communal, as we are going to use it!  The only downside is that there is a little Chihuahua on the deck of the apartment above us who barks and barks the minute you open the door so we’ll probably be serenaded as we make dinner. 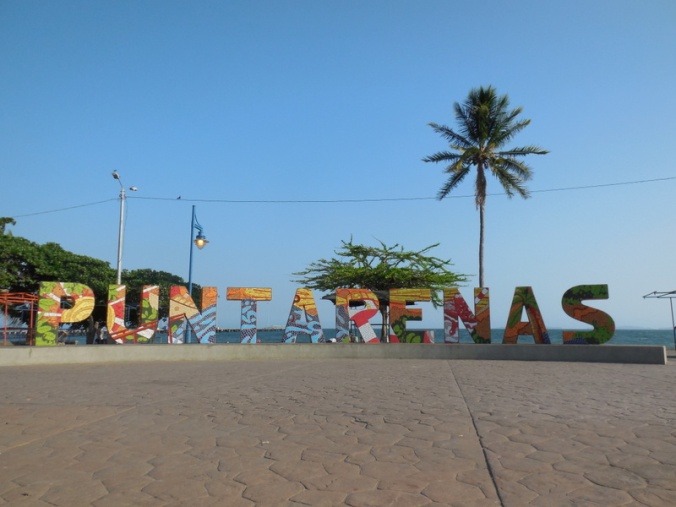 Tomorrow we start our route down along the beaches of southern Costa Rica.  Hopefully we’ll have some good views of the ocean.  We are heading into touristy areas so we may run into more challenges finding places to stay but I guess we can always try to camp on the beach…